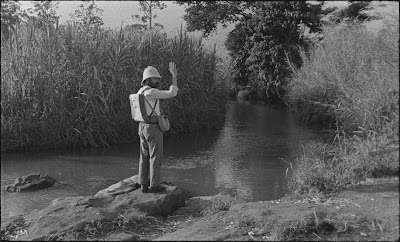 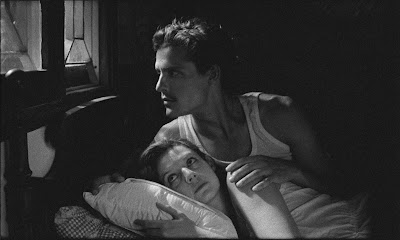 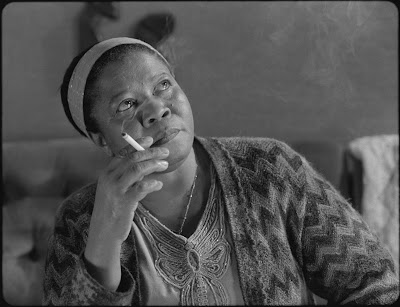 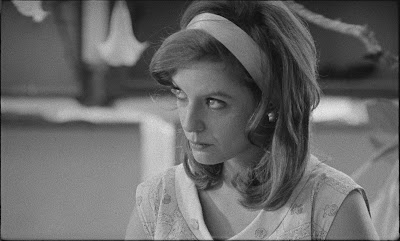 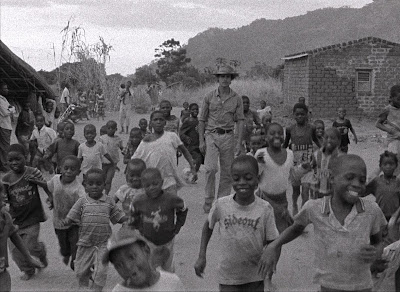 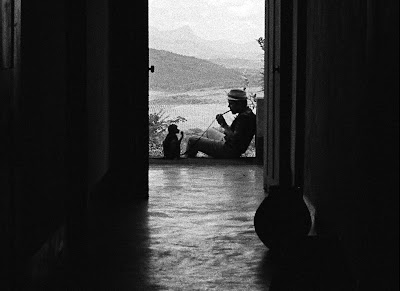 
People’s lives are not like dreams.     —Aurora (Laura Soveral)


A bold, brilliantly written and directed film, where at least part of the joy is in its magical film construction, mirroring the original TABU (1931) directed by F.W. Murnau, a joint project with heralded documentarian Robert J. Flaherty, set in the Polynesian South Sea island of Bora Bora, inverting the two halves which were originally called “Paradise” and “Paradise Lost,” shown here in opposite order.  The film shares similarities to the original even in theme, as both comment on the effects of European colonialization in an otherwise native setting with a beguiling beauty that is so idealized that it becomes mythical.  Blending fact and fiction, reality and fantasy, becomes so seamlessly integrated in both films that the two halves continually comment on one another.  The brilliance of the Gomes film is the extraordinarily magical 2nd half, which is so stunningly beautiful, not to mention amusingly told, that the audience is so captivated by the originality of the story that there’s an instant desire to see the first half again, curious about what might have been missed to see how it all connects.  The second half of the film is all narrated by a single character who describes the story, where the sound of his voice is the only sound heard for the duration of the picture, unraveling like a literary work without dialogue or sound effects, other than some carefully chosen songs, giving the appearance of a Silent film, but the miraculous stretching of the imagination is a thing of beauty, startlingly original, more fabulously inventive than the tedious melodrama of the highly acclaimed, Academy Award winning The Artist (2011), which seems like a cheap imitation by comparison.  Two magical realist literary works immediately spring to mind, the most obvious being Gabriel García Márquez’s One Hundred Years of Solitude (1967), all taking place in the mythical but intensely real town of Macondo, where surrealism and the supernatural are ordinary occurrences, stretching the boundaries of what is considered reality.  The second is Michael Ondaatje’s picturesque family portrait in his fictionalized autobiographical memoir Running in the Family (1982), where he returns to his native Sri Lanka (Ceylon at the time of his birth), blurring the lines between fact and fiction, recreating a scandalously colorful, highly detailed portrayal of his eccentric family, set in an exotic landscape of colonial decline.


Shot in gorgeous Black and White by cinematographer Rui Poças, the more realistic first half is in 35 mm while the magical second half is blown up 16mm.  Opening much like the Coen brothers’ A SERIOUS MAN (2009), with an amusingly ominous Prologue narrated by the director himself set in the wilds of early European exploration of Mozambique in Africa, a Portuguese colony until 1975, with the sweaty black hired hands using machete’s to chop a way through the brush for a hero known only as “the intrepid explorer,” the unscathed white man all dressed up for a safari adventure in khakis and a pith helmet, but never lifts a finger to help, allowing others to do all the back-breaking work, sadly reaching an early demise when he feeds himself to the crocodiles, distraught with grief over his wife’s death, whose ghost can be seen on the shoreline warning him that he will never escape his heart.  In a unique blending of the present with the past, a transition shot suggests what we’ve been watching was being screened in a Lisbon movie theater, which middle-aged Pilar (Teresa Madruga) watches intently with an older gentleman asleep on her shoulder.  After a feigned attempt afterwards to impress her with flowery love talk that she ignores, they go their separate ways home.  With absurdist deadpan humor, the strictly Catholic Pilar leads an uneasy existence, concerning herself with the problems of others, offering her home to a young Polish girl visiting Lisbon with friends, which is amusingly rejected when the young girl lies about her identity, participating in human rights demonstrations, hanging a friend’s painting on the wall every time he comes over while continually rejecting his attempts at courtship, but her real interest is with her zany neighbors across the hall in her apartment complex, Aurora (Laura Soveral), a candidly outspoken and temperamental old woman and her devoted Cape Verdean maid Santa (Isabel Muñoz Cardoso).  Aurora has blown her life’s savings playing slot machines at the casino and is openly suspicious of Santa who she believes is casting Black magic spells.  Mostly seen from Pilar’s somewhat saintly perspective, the three women speak directly into the camera offering close-ups with extended monologues, contrasting their personalities, where both Pilar and Santa are driven by duty, straight-laced and conservative, leading dreary, world-weary lives while the more free spirited Aurora rambles on about recurring dreams of crocodiles and hairy monkeys lurking near her bedside, carrying the emotional burden of a troubled past, where her vivid recollections are simply a marvel of invention. While getting the least amount of screen time, the dour and taciturn Santa remains an object of scorn by her employer, though upon reflection, she may actually be the moral center of the film.


Aurora’s medical condition takes a turn for the worse, suffering from the effects of dementia, but recalls a name from her past, Gian Luca Ventura (Henrique Espírito Santo), a rugged, still handsome, silver-haired gentleman that Pilar finds in another retirement home, stopping first for coffee in the artificially designed rainforest of a shopping mall.  As they sip their coffee, Ventura narrates in voiceover how he met the young Aurora, Ana Moreira from The Portuguese Nun (2010), fifty years ago in an unnamed African colony.  Draped in a literary feel, Ventura’s ingenious story has the playfulness of the García Márquez novel, richly detailed, extravagantly layered, literally transporting the audience into a magical time and place very much like the mythical world of Macondo, which is itself an elusive Paradise, one that eventually disappears altogether.  Aurora is the beautiful but spoiled and filthy rich heiress living at the foot of Tabu Mountain where native servants wait on her hand and foot, leading the ideal life with her perfect husband, Ivo Müller, the local game-hunter who resembles The Man with the Yellow Hat‎ in Curious George stories.  The young Ventura, Carloto Cotta, is a Bohemian free spirit with matinee idol good looks dodging arrest wherever he goes, eventually settling down next door, where we quickly learn he plays in a band singing Portuguese cover versions of 60’s pop songs, like The Ronettes’ “Be My Baby,”  The Ronettes YouTube (2:46) or the Phil Spector produced Ramones cover of “Baby I Love You” "Tabu" Movie Clip #3, directed by Miguel Gomes  YouTube (2:57).  The film’s silence and apparent indifference to the native people and culture around them is simply chilling, especially expressed in a pool party sequence where they all appear oblivious to taking any interest in any life forms other than themselves, becoming obsessively self-indulgent, throwing caution to the wind, as represented by Aurora’s carefree love affair with her lusty neighbor Ventura, a completely reckless act that suggests tunnel vision, acknowledging the couple was “indifferent to the fate of the empire,” but perfectly expressing the casually hedonistic European view of colonialization.  The rhapsodic sweep of their romance is magically transporting, but also morally unsettling, while as they’re recklessly ignoring the dangerous marital consequences, they’re equally oblivious to the rising tide of angry militarism surrounding them.


Following the Cahiers du Cinéma magazine tradition in France, where Godard, Rivette, Truffaut, and now Olivier Assayas all got their start in film criticism before they ever made a single film, Gomes worked as a critic in Lisbon as well.  Although his mother grew up in Angola, Gomes had never ventured into Africa until this film experience brought him to Mozambique, where at least part of the idea for the movie developed from meeting a group of aging Portuguese musicians waxing nostalgic over their days in pre-revolutionary Mozambique, where Gomes indicates “The Africa in the film is more like the mythology of Africa that was produced by colonialism—and, of course, by cinema.”  In his review of TABU Miguel Gomes's 'Tabu' - NYTimes.com - Movies - The New York Times, New York Times film critic A.O. Scott faults the director for glossing over the issues of colonialism in favor of a more compelling film aesthetic.  “Unlike other recent European films (like Philippe Falardeau’s “Congorama” and Claire Denis’s “White Material”), “Tabu” views colonialism as an aesthetic opportunity rather than a political or moral problem. It is full of longing — hedged, self-conscious, but palpable all the same — for a vanished way of life, in contrast to which contemporary reality seems drab and numb.”  But the film structure cleverly plays each half against the other, suggesting there are far-reaching consequences for both the doomed love affair but also practicing foreign policy politics with blinders on, as both lead to tragic ends, which includes the isolated sense of alienation in the first part, also a deep sense of regret.  Aurora, Santa, and Pilar reflect the aftereffects of the sins of the past, still attempting to piece together the disassembled remains of the earlier excesses, leaving psychological scars of wounded memories, still fragmented, unable to discern fact from fiction, historical myths from truth, both past from present, where the indifference of modern society is living proof that many of the wounds from the past have not healed, are still not understood, and continue to be mythologized, much like the continuing politicalization of the present, where dissenting points of view are attacked through heavily financed political advertisements, where it’s again hard to find the truth through the fabricated smokescreen of fiction.  What makes this film so unique is the clever playfulness of the tone, resembling the imaginative whimsy of Wes Anderson’s Moonrise Kingdom (2012), but with surprisingly more depth and complexity, adding more rich textures, subtle symbolism, a variety of wonderful characters, and an otherworldly effect, where Gomes finds strange ways to revisit the unpleasantries of the past through such an experimental and powerfully poetic approach.  TABU is a corrective for past crimes, this time utilizing authentic African songs and chants in balance and harmony with the surrounding lands, where despite the lush Silent screen visualization, it’s the white colonizers that continually appear woefully out of place.
Posted by Robert Kennedy at 2:30 AM