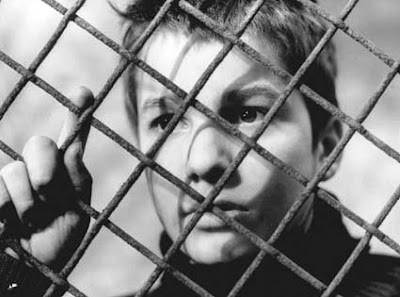 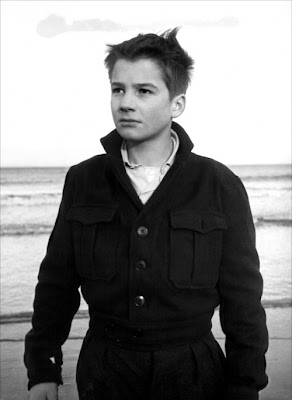 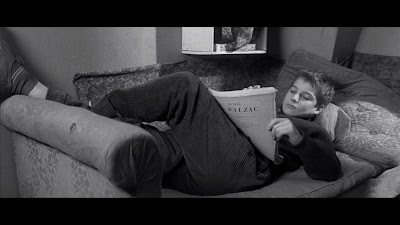 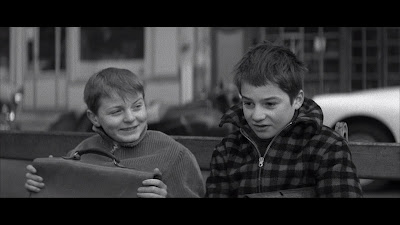 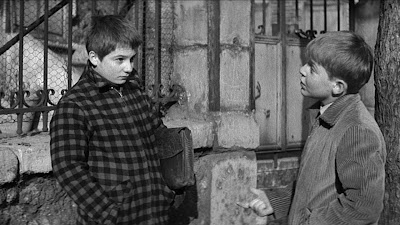 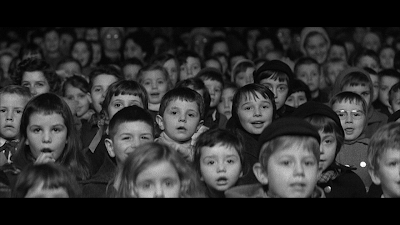 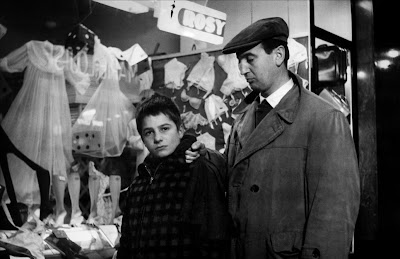 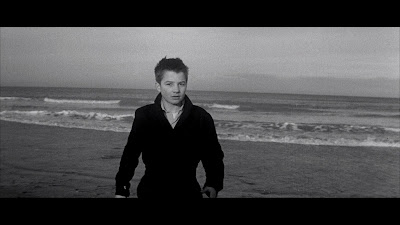 Here suffers poor Antoine Doinel, unjustly punished for a pinup that fell from heaven. It will be an eye for an eye and a tooth for a tooth.
—Antoine Doinel (Jean-Pierre Léaud)

One of the earliest examples of such vivid realism in a feature film, shot in a near documentary style that features plenty of long tracking shots that makes the neighborhoods of Truffaut’s Paris come alive, but also the lengthy running shot at the end that leads Antoine to the sea, where an entirely new world is revealed by the detail of the passing landscapes.  Largely a lyrical, unsentimental character study of 13-year old Antoine (the incomparable Jean-Pierre Léaud), whose life very much resembles Truffaut’s own neglected childhood, right down to the use of his old neighborhood, beautifully captured in black and white with lighter weight, hand-held cameras by Henri Decaë, where perhaps the film this most resembles is the biographical chapter outline in Godard’s later work VIVRE SA VIE (1962), a story told in 12 chapters, where the audience sees various segments of a person’s life that in its totality reveals a wrenchingly honest portrait.  Truffaut takes us through various phases in Antoine’s life, none of them happy, as he’s immediately picked on by his teacher in the opening moments of the film, an incident replayed almost exactly in the Kiyoshi Kurosawa film TOKYO SONATA (2008) with an entirely different outcome, where nearly 50 years later the student stands up to his teacher.

But this begins the cycle of abuse heaped upon the shoulders of this 13-year old boy who, for the most part, is a charming example of boyhood curiosity, a kid who reads Balzac and creates a candle-lit shrine in his honor, but also a kid who continually gets into classroom troubles, which only matches his home life difficulties where it’s apparent neither his mother nor step-father have any real interest in his welfare, preferring instead to allow him to fend for himself, where he hangs out on the streets with his friend René (Patrick Auffay).  There are momentary reprises, such as visits to the cinema, a carousel sequence The 400 Blows (1/4) Movie CLIP - The Carousel (1959) HD  YouTube (2:51), and a phenomenal children’s puppet sequence The 400 Blows Les Quatre Cents Coups The Puppet Show YouTube (1:41), but eventually he has no place to go, suspended from school and running away from home, where if he stays he’s threatened with being sent to a military academy.  Instead, after a meaningless arrest, he’s sent to an all-male juvenile detention center where they actually lock up visiting girls in cages to prevent the boys from causing them any harm.  Much of the vaunted realism holds up today, as kids still get into trouble at school, are unwanted at home, get suspended, run away from home, and end up on the streets where some die, while many get arrested, placed in jails or juvenile detention centers.  All of this is a familiar scenario even fifty years later.

Seen as one of the best films ever made on young adolescence, some of the more harrowing scenes involve his own family, who speak about him to his face as if he’s an imposition to their lives.  His mother is secretly having an affair with a coworker, Monsieur Lucien (Jean Douchet), seen by Antoine on a day he ditched school, and continually stays out late while his dad enjoys spending time at a club on weekends, leaving Antoine alone.  He’s continually treated as an outsider, like a kid who doesn’t belong, but what has he done to deserve this?  He is accused of plagiarism when he writes an essay on the death of his grandfather, a reference to Balzac, who is the closest thing to family he has.  So his real feelings which he’s forced to keep bottled up inside are simply ignored or misconstrued.  The film details a series of events that starts with spending a single night on the streets alone, having to steal a bottle of milk to drink, which eventually escalates into petty thievery, where he steals a typewriter but gets caught trying to return it after he couldn’t sell it.

Easily the most heartbreaking scene is being interviewed by the psychologist at the detention center, where the camera quietly sits in front of Antoine and stares at him as a silent observer as he casually reveals the hidden truths of his life while nervously playing with his hands Antoine's Questioning - The 400 Blows - YouTube (3:03).  Given the Best Director award at Cannes after being prohibited from attending the festival the year before due to his anti-Cannes remarks, there isn’t a single shot that doesn’t in some way add to the whole, beautifully captured by the meticulous detail given to the processing of his arrest, from mug shots and fingerprints, spending time alone in a tiny cell the size of a broom closet, to a slow ride in the back of a paddy wagon through the now well-known streets of Paris where he wells up in tears.  The music may have aged a bit, but particularly fascinating is Jean Constantin’s repeating theme played in the upper registers of a triangle and xylophone, which could easily be considered “Antoine’s Theme.”  Following a long tracking shot of his escape from the detention center 400 Blows Final Scene  YouTube (4:28), Antoine finally arrives at the sea, a place he’s never seen, which brings a look of puzzlement into his eyes in a freeze frame at the end—a classic ending for a classic film that perfectly blends the future into the present.

While one of the earliest examples of French New Wave films, budding signs of which can arguably be seen in Roger Vadim’s AND GOD CREATED WOMAN (1956), this is certainly one of the movies that firmly established the future of a new filmmaking style of intensely personal films that remained stylistically different.  Following in the footsteps of Eric Rohmer, Claude Chabrol, Jacques Rivette, and Jean-Luc Godard, Truffaut was a film critic at the highly influential French film magazine Cahiers du Cinéma before ever making a movie.  The film is dedicated to André Bazin, one of the most renowned and influential film critics, a father figure to Truffaut, and the man who helped secure his position at the magazine.  Born in Paris, Truffaut spent his earliest years raised by a nurse, followed by his grandmother, as his parents were elsewhere most of the time.  When his grandmother died, he returned home at the age of eight.  Never knowing his real father, his mother was only 17 at the time he was born, who herself took refuge in marriage with Truffaut’s step-father a year later.  Insisting that he remain quiet, Truffaut found outlets in both reading and the cinema.  Like the young protagonist of the film, he would often play hooky and sneak into movie theaters or steal money for a ticket, while also running away from home at age eleven, informing his teachers his father had been arrested by the Germans.  The character of Antoine Doinel became a composite of both Truffaut and his young actor Jean-Pierre Léaud, encouraging the young actor to use his own words when at all possible.  According to the director, his aim was “not to depict adolescence from the usual viewpoint of sentimental nostalgia, but…to show it as the painful experience that it is.”

Debts to both Rossellini and Renoir are evident, both stylistically and thematic, using actual locations, mobile hand-held cameras, as well as lengthening certain scenes, heightening the real world effects over studio sets, while the theme of student rebellion against the rigidity of authority more likely has its roots with Jean Vigo’s short film Zero for Conduct (Zéro de conduite: Jeunes diables... (1933).  Like Vigo’s earlier short À PROPOS DE NICE (1930) Two Jean Vigo shorts, the study of a city with an emphasis on contrasting the worlds between rich and poor, Truffaut’s framing of the streets of Paris, as seen almost exclusively through the eyes of young Antoine, show a similar contrast between the storefront windows of affluence and the young boy’s descent into homelessness and poverty, where the exterior shots of Paris connote a certain lyrical freedom throughout.  Rooted in Truffaut’s own childhood, THE 400 BLOWS not only pays homage but becomes fully immersed in the history of cinema, and literature as well, where Truffaut establishes a sense of renewal by sustaining a longterm collaboration between the director and actor in a series of films on the Antoine Doinel character as he grows up, becoming a Doinel saga, from the early short film Antoine and Colette (1962), to Stolen Kisses (Baisers volés) (1968), Bed & Board (Domicile conjugal) (1970), and Love On the Run (L'amour en fuite) (1979).  Jean-Pierre Léaud was only 14 when he auditioned for the part JEAN-PIERRE LÉAUD'S FIRST AUDITION FOR THE 400 BLOWS  YouTube (1:32), perfectly capturing the needed feeling for the character, played with a solemn detachment, one of sixty young boys who responded to the ad, who ironically skipped school to get to the audition, but Truffaut chose Léaud because “he deeply wanted that role…an anti-social loner on the brink of rebellion.”
Posted by Robert Kennedy at 2:01 AM