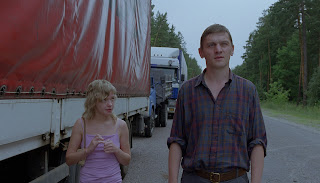 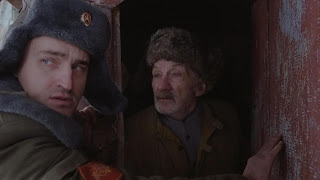 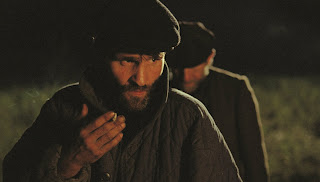 What starts out with huge amounts of style and promise, where Loznitsa envisions a Russian SÁTÁNTANGÓ (1994) after the cinematic style of Béla Tarr, creating a lengthy road movie told in extended segments of real time, but it’s a film that does not have the humor, depth, or complexity of Tarr’s original, and cannot sustain its initial artistic heights.  It’s also worth noting that while the composition of many of the shots is breathtaking, the use of a digital camera limits one’s appreciation for the subject, as it simply doesn’t have the depth of image and feels even more flattened out over time.  The narrative itself is a little puzzling, as characters can get lost in the storyline, but in this film, the overall mood is paramount to character.  The story itself isn’t nearly as important as the way that it’s told, in long takes with near documentary precision and with no musical score.

Russia’s open road is fraught with potential dangers, creating a bleak underbelly of criminality lurking behind every hardened face, including the faces of children, where young teenage girls parade in front of cars and trucks that are stopped due to a truck overturning up ahead and offer their sexual services. When one truck driver Georgy (Viktor Nemets) befriends one of the girls, eventually asking for alternate directions out of the area, she turns on him in a wrath of fury, offended that he didn’t take her sexual offer seriously, as this is indeed how she makes her underage living.  Georgy ends up walking through the village streets and through a crowd, where the camera pans up into the faces of villagers, none of whom look happy or relaxed, as people of all ages seem to have that dead look in their eyes, but the camera moves and explores, finding an object of interest and becomes fixated on that subject for awhile until it moves out of sight.  Later the truck’s headlights are seen in the blackness of the night, moving in what appears to be circles in the middle of a forest until it comes to rest with the motor stopped.  Two men in the night hear the sounds and converge towards it, where human kindness is seen as a sign of weakness and an opportunity that presents itself on this road that suddenly goes nowhere.

Occasionally the film introduces a character who opens the floodgates to a flashback, where time jumps backwards, creating a journey into a seemingly timeless exploration of memory and our knowledge of certain familiar landmarks, where the same house is seen inhabited by different sets of people over time, all lending itself to a differing perception of history, while also creating memory gaps that not everyone may be familiar with.  The viewer is given knowledge that the characters onscreen may not have, as we’ve witnessed certain incidents that took place in a different time.  This seamless movement back and forth in time is barely discernable, but the audience is fed new characters which bring us up to date on the changing times, just as brutal and horrific as the olden times.  While the specifics aren’t that important, what remains imprinted into the viewer’s minds is the vision of a nightmarish hell on earth where no one can be trusted, where scoundrels move into positions of authority, and where the landscape moves ever darker into a lawless, apocalyptic nightmare, where only the briefest hint of light protects humans from gradually creeping back into the dark ages.
Posted by Robert Kennedy at 2:46 AM