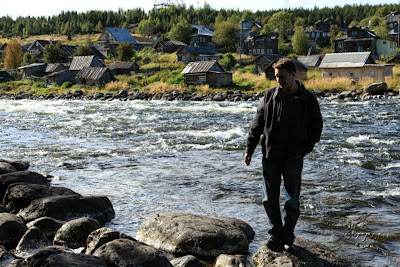 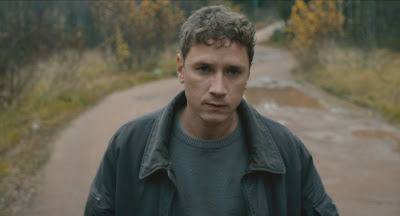 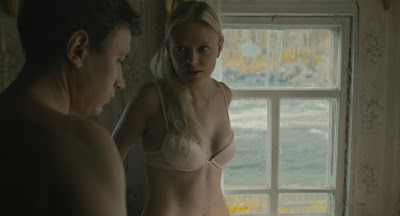 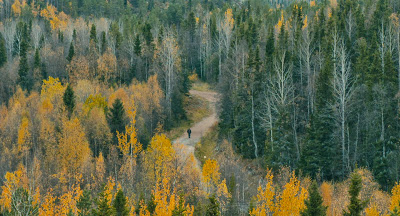 Much like Russian director Aleksei Popogrebsky’s 2010 Top Ten Films of the Year: #6 How I Ended This Summer, which takes place in a remote science station on the Arctic ocean, where the ruggedness of the barren location was a silent character to the film, Khlebnikov shot this film in the Kola Peninsula located in the far northwest of Russia, constituting the bulk of the territory of the Murmansk Oblast, lying almost completely above the arctic circle, where the natural beauty of the location almost takes one’s breath away.  It should be pointed out that these two filmmakers, Khlebnikov and Popogrebsky, collaborated on an earlier film, the award winning ROADS TO KOKTEBEL (2003), another Russian film with minimal dialogue and stark cinematography.  Using the stunning backdrop of a small village clinging to the banks of a rapidly moving river, we are introduced to Sasha (Alexander Yatsenko), a potato farmer who also raises chickens, who is getting the business by a couple of mafia style businessmen who are offering to compensate him for his land, claiming a single owner is buying up all the farmland in the region.  This kind of high pressure business tactic is not really a choice, as it’s a deal that’s being rammed down his throat.  As we see him walking out the door afterwards, he’s joined by Anya (Anna Kotova), the sexy blond secretary working in the office that sat silently upstairs just a minute ago, where they embrace with a kiss, both smiling at the prospects of quick cash money where they can return to the city and buy a home together, seen later sleeping together in his bedroom with windows overlooking the river, where the sound of the rapids is everpresent.

When Sasha tells his farmhands the news, that they will end this harvest season and then close up the farm before the first snow falls, the farm workers have other ideas, as they don’t like being pushed off their land and urge Sasha to stand up to the fat cat bureaucrats and put up a fight, suggesting they’re willing to take up arms to protect their livelihood.  This inspirational communal spirit catches Sasha by surprise, as he’s a city kid that moved specifically to an agrarian community to head up a collective farming project convinced his experimental ideas would work.  Touched by the outpouring of support, he decides to stay on his land and refuses to sign for the money, despite the implicit threats that this will only bring him harm, even losing Anya in the process.  Initially, however, spirits are high, as this little collective is driven by their own ideals and passions, as they’re working the land.  But one by one, individuals pull out, as some want a share of Sasha’s compensation money, even though he’s refused to accept a penny, or need personal loans, while others go on hunting trips, or claim they have other job opportunities they can’t pass up.  Perhaps the most suspicious and damning evidence is a giant fire that burns down the house next door—certainly an ominous sign.  The spirit of camaraderie soon unravels and the farm hands are actually blaming him for listening to them, suggesting all the signs favor the money interests, as they always get their way.  The unseen implication is that each one has been individually threatened and coerced to change their minds, with an underlying threat of violence lying behind every act of persuasion.

Despite the break in the ranks, Sasha silently goes about his business building chicken coops for chickens that may never come, refusing to be bullied, where this recalls Gary Cooper as the noble sheriff, a man alone standing up to a group of outlaw killers in HIGH NOON (1952), where the entire town abandons him out of fear.  Sasha is a similar likeable but doomed hero, where the mood veers to what horrors could befall this man, where we wait for the inevitable, as his protection has completely dried up and disappeared.  It’s interesting to see this kind of portrayal of an idealistic hero in a post-communist Russia, suggesting the old ideals of collectivism and working in solidarity for the social good have lost all credibility, as Russia’s current leadership hoards money and power and rules by intimidation and fear, where everyone’s looking out for their own self-interests.  There’s an interesting scene where Sasha is driving his car at ever increasing speeds, with the camera fixed on his face, and as the motor grows louder his expression grows in anger and disgust, where the audience is surely waiting for the inevitable crash that never comes.  Sasha grew up after the collapse of the USSR and imagined he’d be part of the new era, only to discover former friends are behind the move to drive farmers off their lands.  Khlebnikov’s film suggests being a farmer is no longer an option in Russia, that in land grabs, investors have driven all the farmers off their lands.  The film similarly recalls the finale of Robert Altman’s McCabe & Mrs. Miller (1971), which expresses an anti-western fatalism atypical of the western genre, where a reluctant protagonist and his enemies have their own “high noon” sequence completely out of sight of the rest of the community, and unaware of the gravity taking place in their midst.  Khlebnikov uses an ironic title about a socially committed ordinary man who, despite his best intentions, winds up a criminal, where rather than a utopian dream, he’s forced to live in a Hell on earth.
Posted by Robert Kennedy at 10:34 AM