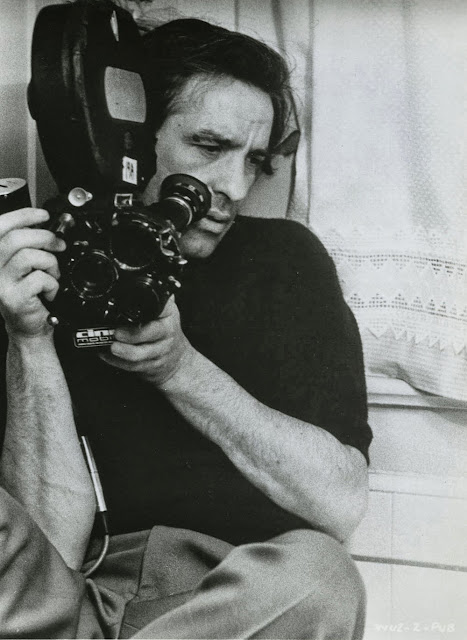 Hollywood is not failing. It has failed. The desperation, the criticisms, the foolish solutions, the wholesale cutting of studio staffs and salaries, the various new technical improvements, the "bigger picture", and the "ultra-low-budget picture" have failed to put a stop to the decline.

The fact is that film making, although unquestionably predicated on profit and loss like any other industry, cannot survive without individual expression. Motion pictures can not be made to please solely the producer's image of the public. For, as has been proved, this pleasure results neither in economic or artistic success.

On the other hand, the audience itself, other-directed and mass-minded as it is, may condemn pictures such as Twelve Angry Men or The Goddess. These pictures may lose money, but they have inspired applause from those who still think freely and for themselves. These pictures have gone beyond Hollywood "formula" and "ingredients", and will affect strongly the future of American motion pictures.

More often than not, the mass audience will not accept a new idea, an unfamiliar notion, or a different point of view if it is presented in one or two films only, just as it will not immediately accept new ideas in life. However, the new thoughts must eventually lead to change.

This is not to say that individual expression need only be so called point-of-view films or films that stimulate thought. Certainly the standard of the musical can and must be improved too; the treatment of comedy should reach in other directions; the "epic" and "Western" pictures and the "love story"must also search for more imaginative approaches and fresher ideas.

However the probability of a resurrection of the industry through individual expression is slim, for the men of new ideas will not compromise themselves to Hollywood's departmental heads. These artists have come to realize that to compromise an idea is to soften it; to make an excuse for it, to betray it.

In Hollywood the producer intimidates the artist's new thought with great sums of money and with his own ego that clings to the past of references of box office triumphs and valueless experience. The average artist, therefore, is forced to compromise. And the cost of the compromise is the betrayal of his basic beliefs. And so the artist is thrown out of motion pictures, and the businessman makes his entrance.

However, in no other activity can a man express himself as fully as in art. And, in all times, the artist has been honored and paid for revealing his opinion of life. The artist is an irreplaceable figure in our society too: A man who can speak his own mind, who can reveal and educate, who can stimulate or appease and in every sense communicate with fellow human beings. To have this privilege of world-wide communication in a world so incapable of understanding, and ignore its possibilities, and accept a compromise--most certainly will and should lead the artist and his films to oblivion.

Without individual creative expression, we are left with a medium of irrelevant fantasies that can add nothing but slim diversion to an already diversified world. The answer cannot be left in the hands of the money men, for their desire to accumulate material success is probably the reason they entered into film-making in the first place. The answer must come from the artist himself. He must become aware that the fault is his own: that art and the respect due to his vocation as an artist is his own responsibility. He must, therefore, make the producer realize, by whatever means at his disposal, that only by allowing the artist full and free creative expression will the art and the business of motion pictures survive.

It's always a good sign when critics write about Cassavetes, because he deserves it, and because his influence should be discussed in the same breath as Altman or Kubrick, who lived to be admired in their lifetimes, or Welles, who like Brando, became a derogatory caricature, something of a comical antithesis to who and what they really stood for in the eyes of the public by the time they died.  Cassavetes died relatively young, where he showed no signs of slowing down or becoming more mainstream, continually inventing relevant characters whose personal crises became our own.  With his unique style, as no one else was making films like Cassavetes, or taking the critical abuse for making films no one at the time understood, who did he have to draw inspiration from or compare films with?   Critics always said he was so off the beaten track that there was no audience for his films, condemning what we now know is his sheer originality in his examination of the human condition.  Cassavetes' influence was through the intense creation of his characters, the kind never shown on movie screens, the kind whose troubles and flaws matched their wit and humor, the kind who gave everyone an excuse not to love them, but then finds a way as the director to embrace them all the same.  His commitment to his own ideas and to his craft is unlike any other filmmaker, as he was largely self-funded, self-promoting, and only worked when the money was there, which wasn't very often, so he left us only 9 films that are indisputably original works, something along the ranks of Dreyer or Tarkovsky.  Most critics don’t go that far in praise of Cassavetes, but at least they’re still paying attention.

Cassavetes is all about finding something human and believable in the characters, where what he's filming onscreen may as well be a theatrical representation of our own screwed up lives.  In my view, that's something Cassavetes does better than all the so-called greats, as his films are not filled with grandiose moments or perfect sequences, but in the everyday ordinary moments in our lives, not at all like Ozu, who captures a rhythm and a fixed  viewpoint, but in the way he assembles small, uncomfortable moments that have a way of escalating into something more intense, because people have a way of not letting things go, so it germinates into something altogether different and is no longer even recognizable even to that individual.  Cassavetes is extremely good at shining a light on what's wrong with us, and then we the viewers have to decide whether or not it's real and if it matters, and if it does, whether we can transcend the material onscreen.

As Shadows (1959) was made at the same time as the French New Wave, his groundbreaking filmmaking style is oftentimes unfairly compared, as Cassavetes’ strengths are not something the French New Wave did very well.  No one else except post New Wave director Jean Eustache comes to mind when trying to recollect filmmakers who dwell on human interaction (or lack of it) in such a fiercely documentary manner as Cassavetes.  Human interaction is a common theme in cinema, where the screen is constantly lit with subtitled conversations, but they don't *dwell* on it where it becomes larger than life, the focus of the film, an entity unto itself.  Cassavetes simply has a different way of exploring humanity, and what some people find crude and ugly is exactly what is most fascinating, as it's probably the most revealing aspect of his filmmaking, and something very few others even attempt to do.  Those that do tend to be crude masquerades.  In Cassavetes movies, his characters are always caught up in the miracle that is the present, where they may not know what to do with it, but they're sure as fuck in the moment.
Posted by Robert Kennedy at 9:30 AM

Email ThisBlogThis!Share to TwitterShare to FacebookShare to Pinterest
Labels: Cassavetes