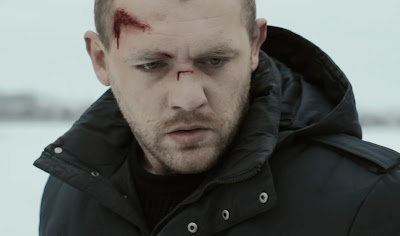 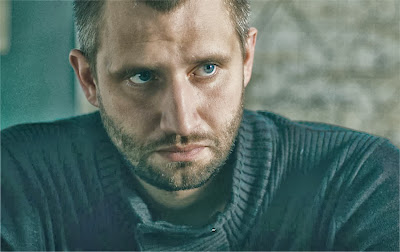 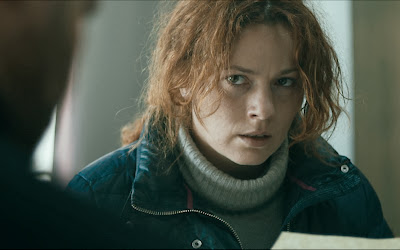 
Yuri Bykov in his second feature has designs on becoming the Russian John Carpenter, as he writes, directs, edits, acts, and composes an extraordinary musical score that elevates this police thriller into unanticipated heights, while the other major contributer is cinematographer Kiri Klepalov, especially his snowy landscapes.  Set in the dead of winter, the Deputy Police Commander, Major Sobolev (Denis Shvedov), wakes to a phone call that his wife is about to give birth to his firstborn, so he hops in his car and starts driving like a bat out of Hell, where the streets look like pock marks of frozen snow and ice, but he drives around cars, drives furiously into the other lane of oncoming traffic, and just about gets half a dozen people killed before he finally does hit a 7-year old kid trying to cross the highway to get to the bus stop, his mother (Irina Nizina) watching in horror.  When he calls to ask for help, he requests a special 2-man team, Detective Kroshunov (the director Bykov) and uniformed officer Merkulov (Ilya Isaev), who are basically the clean-up crew, the guys that clean up other people’s messes and make sure the police aren’t held liable.  While posing as sympathetic officers, they give the hysterical mother some brandy to calm her down, then make sure she’s given a blood test to provide evidence of her own culpability, while also falsifying the accident report to make it seem Sobolev was traveling half as fast as he was, all protecting their own asses.  Due to the severity of the incident, Sobolev and Kroshunov are ordered to the home of the Police Chief, Pankratov (Boris Nevzorov), who is indistinguishable from a mob boss, ordering them to have her sign a statement by any means necessary agreeing to Sobolev’s version so they don’t have internal affairs sniffing down their noses.


This is an adrenaline-laced film that continues at a furious pace, building suspense throughout, where one of the strengths is the ensemble cast, as everyone feels naturalistic, especially the distraught mother Irina, who’s immediately onto the police, bringing her husband (Dmitry Kulichkov) with her to the station, but he gets brutally pummeled by Kroshunov until she signs, barely able to walk out in one piece.  A short time later, however, the husband returns to the station with a shotgun, taking two officers as hostages, asking for the guy that killed his son, where this immediately recalls Carpenter’s ASSAULT ON PRECINT 13 (1976), especially the director’s ability to keep the suspense level at such a high intensity throughout, where Sobolev’s guilty conscious starts to dominate his thoughts, but the others refuse to let him take the blame, as that would implicate the entire command.  Instead, the film paints a grim reality of contemporary Russia, where the remnants of Stalinest brutality are everywhere to be seen, especially the way the film keeps escalating into more and more senseless violence, as any witness can be eliminated while the police turn their eyes.   In this way, ordinary citizens are made to take the blame for police crimes, considered disposable, and as they’re not on the force, in their eyes, murder and lies are condoned, so long as it protects the good standing of the police.  This kind of dismal world view continues, where Sobolev wrestles with the idea of having a change of heart, while his police brethren are forced to keep him on a short leash.


Bykov makes excellent use of Russian exterior shots, including the drab concrete high rises and the factory smoke stacks releasing billowing smoke, but most especially the emptiness of the snowy landscapes, where only electric power grids fill the void.  Because of the close camaraderie of the police, the way they continually have each other’s backs, like brothers, one actually begins to sympathize with Sobolev and Kroshunov, whose morally conflicted characters shed light upon their own devastatingly bleak humanity even as they are screwing up and ruining other people’s lives.  Astounding as it seems, you have to admire their commitment and adherence to a bold ideal, even if it’s criminally motivated, because this so accurately represents the power vacuum left in Russia today, where thugs and gangsters fill the leadership positions where party leaders once ruled.  The Communist moral principles have been replaced by practical criminal necessities, doing what needs to get done so no one exposes your embezzlement and extortion power schemes.  What’s perhaps most fascinating is Sobolev’s vascillation with his guilty conscience, blaming himself for all that’s gone wrong, an old school idea out of Dostoyevsky’s Crime and Punishment that no longer has a place in this Russian new order that shows no remorse whatsoever.  In this murky Macbethian fatalism that fouls the air, any noble idea about clearing the air and setting things straight can only be met with a bullet to the head.  Seeing how this murderous corruption ring operates at such close range, Irina utters to her continuing amazement, “What kind of men are you guys?”  Before the day is through, however, she is under no illusions.
Posted by Robert Kennedy at 11:13 AM