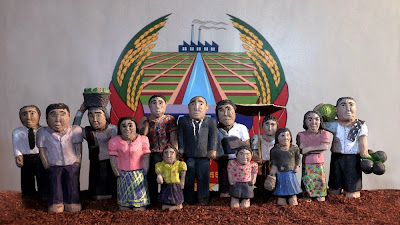 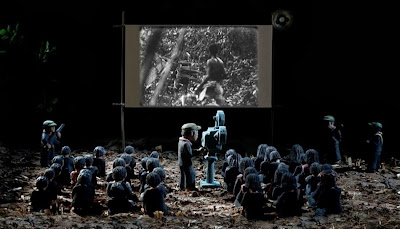 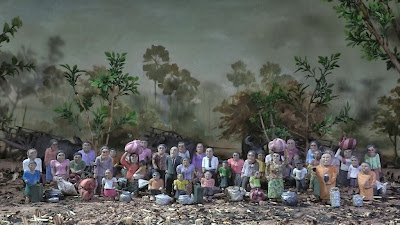 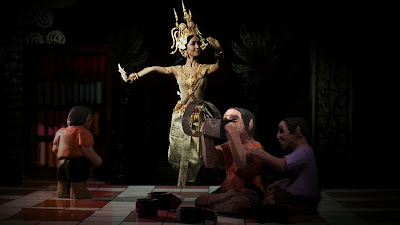 
Imagine a society in which money has been banished. A society in which you would be arrested if you wear eyeglasses, if you wear ties, or if you speak a foreign language. One where it is prohibited to wear bright colors, to have long hair, to marry for love, to even express emotions. You are a traitor if you catch a fish, or pick a fruit. All of these actions signify that your have an individualistic way of thinking, not a collective one. These activities signify that you are educated, that you are bourgeoisie, and that you are therefore an enemy. Simply for reading this essay, you would be considered an enemy, one who needs to be eliminated. While such a society sounds possible only in fiction, this is what happened during the reign of the Khmer Rouge. They attempted to eliminate the middle-class, but what happened in Cambodia between 1975 and 1979 was the elimination of humanity. The idea was to go backward, to become peasants again, to de-civilize society. To lose everything we have gained.
—Randy Rosenthal, book review of Rithy Panh’s The Elimination from The Coffin Factory, Review • The Elimination by Rithy Panh | The Coffin Factory


For many years, I have been looking for a missing picture: a photograph taken between 1975 and 1979 by the Khmer Rouge, when they ruled over Cambodia...On its own, of course, an image does not prove mass murder, but it prompts us to think, to meditate, to build history. I searched for it in the archives, in old papers, in the villages of my country, in vain. Now I know: this image must be missing. I was not in fact really looking for it; would the image not be obscene and insignificant? Thus I have made it up. What I offer you today is neither the image nor the search for a unique image, but the image of a quest: the quest that cinema allows.
—Rithy Panh


While the film has a Chris Marker essayist tone about it, with a pensive first-person narration beautifully expressed throughout, written by Rithy Panh but spoken by French-Cambodian actor Randal Douc, the film is a somber meditation on memory and death, specifically the Cambodian Genocide that took the lives of Panh’s family during the reign of Pol Pot and the Khmer Rouge in the 1970’s.  The Maoist regime, modeled largely after China’s Great Leap Forward (1958-61) and the Cultural Revolution (1966-76), executed 90% of Cambodia’s creative artists and performers, while also targeting intellectuals, teachers, doctors, former military police members, lawyers, and religious devotees, mostly in the very first year of rule, effectively eliminating any form of western technology, decimating the once thriving film industry, abolishing the middle class, while advocating a communal way of life, where city dwellers were forced into punishing agrarian labor camps to live and work in the rice paddies, where they were told “A spade is your pen, and the rice field your paper.”  Perhaps most significantly, citizens were evaluated according to how closely they adhered to the new ideology, where children helped eliminate their own parents.  And while the stated enemy was foreign imperialists, the fact is they murdered 1.7 million other Cambodians, where the combined effects of executions, forced labor, starvation, and poor medical care caused the deaths of nearly one-third of the Cambodian population.  Largely inspired by his own book, The Elimination: A Survivor of the Khmer Rouge Confronts his Past and the Commandant of the Killing Fields, that he co-wrote with French novelist Christophe Bataille, the film won the Un Certain Regard award at the Cannes Film Festival, and while it’s considered a documentary, it must be included in any discussion of the best films of the year, as it’s a potent subject, an amazing film aesthetic, and one of the most dramatically powerful films seen in years.  Its haunting expression feels more like a sacred religious experience, a transcendent film that attempts to express the indescribable, as words are clearly inadequate, and the overall tone is one of unending sorrow.


What Apichatpong Weerasethakul is to Thailand, Rithy Panh is to Cambodia, arguably the foremost documentarian chronicling the crimes of the Khmer Rouge, where both largely reflect the Buddhist consciousness of their respective nations, where much of their artistic careers were built reflecting on the horrifying aftermath of Communist killings, developing memory plays that interact in the present with the audience.  Since there is no known footage of Pol Pot executions or even evidence of ordinary life, the director describes this as “the missing picture,” enlisting the aid of French-Cambodian artist Sarith Mang to help chronicle the Khmer Rouge years with literally hundreds of clay carvings of all the missing people.  Panh and his family were among the 2 million residents of the capital, Phnom Penh, who were forcibly evacuated (none of it captured on film apparently) to rural areas by the Khmer Rouge, where a once vibrant city becomes totally deserted on April 17, 1975, The Missing Picture YouTube (1:30), where Panh is exactly the same age as Truffaut’s Antoine Doinel in The 400 Blows (Les quatre cents coups) (1959).  Their autobiographical portraits couldn’t be more radically different, as Panh’s use of hand-painted clay figurines are used as stand-ins to represent himself, his family, and so many others during the reign of terror, continually mixed with old newsreel and modern day footage, as well as a heartbreakingly personal narration that provides a vivid account of the horrors experienced, where first his parents, nephews, and little sister all die, one by one, while his brother disappears early, and he is left as the lone family survivor left to tell the story.  This unique method is highly inventive, where perhaps the most memorable is mixing live images of a dancing actress into his memory world, creating a magical effect, Clip: The Missing Picture, "Childhood Cinema" (NYFF51)  YouTube (2:12).


The musical score by Marc Marder beautifully supports the film, as the continually shifting music and sound design, along with the flowing narration, provide a fluid sense of motion and movement, like the wind or the lapping waves of the sea, even as the figurines remain still.  Listening to him describe life in the camps is reminiscent of Elie Wiesel’s autobiographical novel Night that recounts his experiences at age 16 in Auschwitz and Buchenwald at the height of the Holocaust, where he learns “Here there are no fathers, no brothers, no friends, everyone lives and dies for himself alone.”  You wouldn’t think little stick figures could convey such deep meaning, but it is shockingly effective, where the horrifying death of his sister couldn’t be more devastating.  As he describes the starvation in the camp and the delusional ideology that produces so much death, equally as methodical as the guillotine or gas chambers, these lives hold no meaning whatsoever to the regime, where the figures disappear before our eyes, a hauntingly convincing technique.


If I close my eyes, still today, everything comes back to me. The dried-up rice fields. The road that runs through the village, not far from Battambang. Men dressed in black, outlined against the burning horizon. I’m 13 years old. I’m alone. If I keep my eyes shut, I see the path. I know where the mass grave is, behind Mong hospital; all I have to do is stretch out my hand, and the ditch will be in front of me. But I open my eyes in time. I won’t see that new morning or the freshly dug earth or the yellow cloth we wrapped the bodies in. I’ve seen enough faces. They’re rigid, grimacing. I’ve buried enough men with swollen bellies and open mouths. People say their souls will wander all over the earth.

In order to maintain his sanity, he reflects upon better times in his youth, yet this also vividly describes the extent of what has been lost, as people were friendlier and happier then, a time when food was plentiful and music filled the air, such as this local rendition of Wilson Pickett’s “Midnight Hour,” Clip: The Missing Picture, "Plane Savior" (NYFF 51)  (1:32).  With extraordinary grace, Panh tells the story of his ravaged country subjected to incomprehensible horror, including 500,000 American bombs, where “the more bombs the American B-52s dropped, the more peasants joined the revolution, and the more territory the Khmer Rouge gained,” suggesting the Cambodian genocide was a direct result of American action, knowledge few Americans hear about or are aware of, all the more reason to see a film that resounds with such indescribable pain and open defiance.  Often playing like a video installation, drawing us nearer to the experience, the film resonates with such deeply felt intimacy that its very unusualness heightens the effect.  This is a world where “color vanished like laughter, song, and dance,” where the only object anyone was allowed to own was a spoon.  “The revolution’s promise existed only on film,” as peasants are seen happily toiling in the fields from the regime’s own propaganda footage that absurdly mocks the pitiful stream of deaths that comprise the abysmal reality.  The rusty film cans seen in the opening moments remind us what a fragile thing memory is, where this brief historical moment wiped out more than twenty years of freedom and independence, all but rewriting a nation’s history by replacing everything that previously existed with pathetic propaganda films.  Panh’s extraordinary film creates a visual record of what was lost, where his first-hand experience reminds us how cinema plays such a prominent role in shaping our view of history.
Posted by Robert Kennedy at 2:45 AM