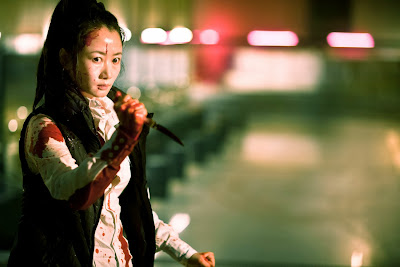 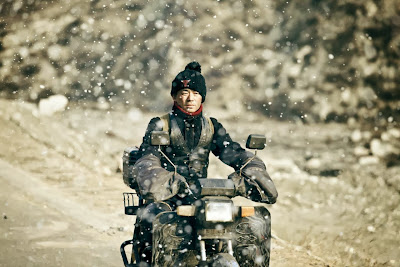 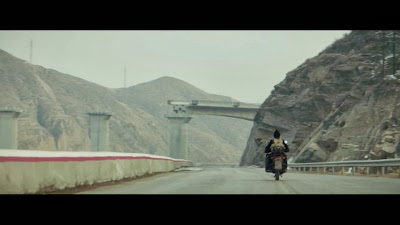 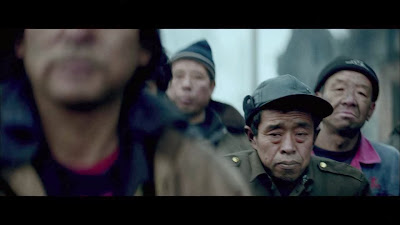 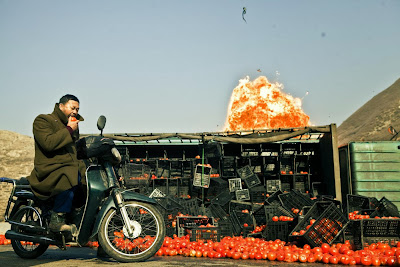 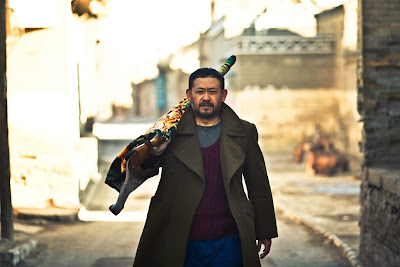 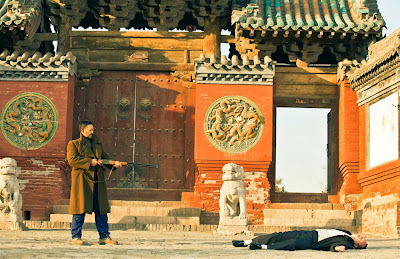 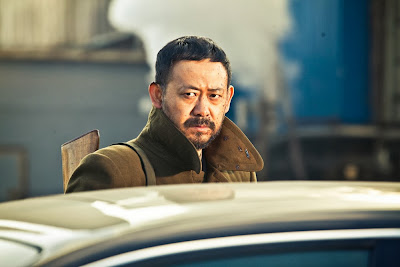 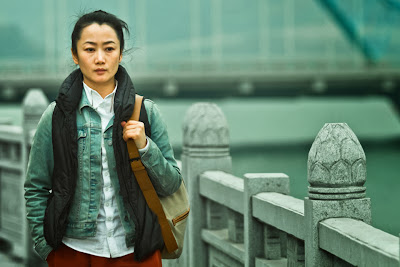 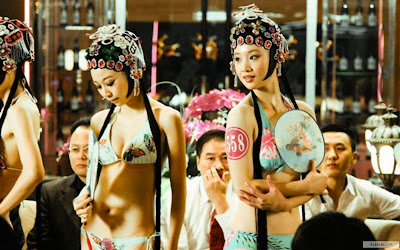 One of the few award winning films at Cannes this year, winning the best screenplay, which one might question, as the supreme directorial flourish is usually what sets a Jia Zhang-ke film apart from the rest, but as it turns out, it’s an extremely well-written story that continues to surprise right through to the end.  Offering a rather blistering comment on what it’s like living in China at the moment, where citizens are in a Kafkaesque situation forced to endure unthinkable realities where there is literally no escape from the unending comedy of horrors inflicted upon them by the powers that be, as the government attempts to offer an alternative to generations of totalitarian communism, but the introduction of capitalism has produced a black market economy that resembles the Russian mafia.  How is any ordinary citizen supposed to deal with the unlimited power and reach of those guys?  The distance between the “haves” and the “have nots” is even more unfathomable, where most everyone continues to have nothing while a privileged few hoard it all.  In Jia’s hands, it’s a near surreal landscape, where he continually mixes in pictures of a haunting past into the present, effectively using images of shrines, pagodas, and classical art contrasted against the busy city streets, where the looming presence of the past is evident everywhere.  Through the lens of cinematographer Nelson Yu Lik-wai, the director continues to provide films of ravishing beauty, where the poetic visualizations are often spectacular, and this is no exception, but there is also an intrusion of darkness, utter brutality, and ruthlessness, leaving behind a particularly empty void of responsibility, where Chinese citizens are continually expected to do more with less.  The picture of life in China, ranging from the busy southern metropolis of Guangzhou to the more rural townships in Jia's home province of Shanxi, couldn’t be more bleak, where the promise of brighter days ahead appears stained in blood and tears.

What this film does express, unlike anything else this arthouse director has ever done, are grandiose, somewhat spectacular, spectacle sequences of graphic violence, where it appears he even turns to the martial arts wuxia genre form, as incredible as that sounds, while other scenes resemble the Charles Bronson vigilante justice style movie, with irate citizens taking matters into their own hands.  But the appalling idea of Chinese citizens resorting to guns to exact justice or revenge has the feel of western fantasia, like some kind of idealized dream sequence similar to Bobcat Goldthwaite’s raucous American satire God Bless America (2011), as China prides itself as being different than the excessively violent images continually coming out of the gun-happy West, yet here it is thoroughly entrenched in the grim realism of everyday Chinese life depicted, where people are backed into a corner feeling they have no other choice.  At the Cannes Film Festival press conference the director acknowledged the film would have to be edited to play in China, as we see a variety in choices of weapons used, from hand axes, meat cleavers, shovels, crowbars, hand guns, shotguns, and knives, where the neverending barrage of assaults does reflect the extreme degree of economic and psychological damage citizens are forced to endure, where they are pushed to the breaking point of near insanity, resorting to such extreme means only because the options are otherwise dire or nonexistent.  That said, this is a work of rare intelligence and cold observation, where you’ll be hard pressed to find this kind of acute criticism coming out of China, or even America for that matter.  While this is a series of interconnected stories that actually happened in real life and will be compared to other similarly written movies, like the broad overreach of interglobal (“We are all connected”) interconnectivity in the Guillermo Arriaga stories of Alejandro González Iñárritu’s movies like AMORES PERROS (2000), 21 GRAMS (2003), or BABEL (2006), or the conniving, manipulative nature of Paul Haggis’s CRASH (2004), this is not like any of them, and comparisons seem frivolous, as Jia has his focus clearly on what’s happening “inside” China and never points his camera or his insights elsewhere.

While it all unravels with an element of surprise, the director uses four different characters to carry out the existing themes that are raised throughout the film, where characters overlap, but not the storyline, including Dahai (Jiang Wu), a frustrated coal miner in Shanxi province whose outrage hits the boiling point when the corrupt capitalist owners sell off the collective property of the mine without paying dividends to the workers, driving brand new Maserati and Audi cars, even a private jet, and then refuse to even discuss the matter afterwards.  Zhou San (Wang Baoqiang) is a nomadic migrant worker on a motorcycle (wearing a Chicago Bulls cap!) with a secret inner life that is never revealed, but he apparently makes a living off of his own inflicted road kill.  Xiao Yu, Jia’s frequent actress and real life wife, Zhao Tao, is conflicted over a longterm affair with a married man while working as a receptionist at a spa.  Within the span of a few hours, she is both assaulted by the man’s family at work, while also forced to violently fend off unwanted advances from drunken businessmen who expect sexual favors for their wads of cash.  And finally Xiao Hui (Luo Lanshan) is a young factory worker who is blamed for an accident at the plant, fleeing to a neighboring city where he gets a job in an upscale hotel that provides sex services for its disgustingly wealthy customers, one of whom is amusingly played by the director himself, catering to their every need, where he falls for one of the attractive comfort girls (Li Vivien), but is doomed by her relentlessly demanding subservience to the customer’s needs.  Finding another job in yet another mindless factory, he finds himself living a hellish existence in a ghetto styled high rise building, where the neighboring building is a mirror image, ironically called the Oasis of Prosperity, revealing row upon row of laundry hanging outside on the line.  The sense of confined suffocation is certainly prevalent in three of the four characters, where the fourth resorts to criminal behavior to get out from under it.  For him (Zhou San), living at home with his family in a dead end town is equally suffocating.


It’s a brilliantly conceived film that reveals the depths of complexity through multiple characters experiencing their own agonizing sense of loss and suffering, where each strand of the story reflects a certain dehumanization associated with economic prosperity.  In each, they escalate to an outburst of violence while also showing a deeply layered societal sense of indifference and alienation, where an overriding fatalism seems to be choking the very life out of people.  Separated from any real meaning or connection to one another, individuals are forced to live in tiny spaces that resemble prisons from which they have no escape.  The working environment especially holds such an oppressive and hostile look of vacuous sterility that it resembles the meticulousness of Austrian documentaries like Nicolaus Geyrhalter’s OUR DAILY BREAD (2005) or Michael Glawogger’s WORKINGMAN’S DEATH (2005), or more specifically the stunning power reflected in the seemingly endless opening shot of Jennifer Baichwall’s MANUFACTURED LANDSCAPES (2006), seen here Stars Of The Lid - Taphead (12:55) in the first seven and a half minutes, though the clip adds music that is not in the film, and it quickly cuts away before the shot actually comes to a slow stop, finally holding on a worker asleep at his station.  The slow tracking shot down a side aisle of a huge Chinese iron assembly plant of 23,000 workers reveals endless rows of bright yellow-shirted factory workers sitting at their work stations performing a synchronized monotony of repetitious motions, many of whom seem relieved to stop and stare at the camera’s obvious intrusion, where the accumulation of ever-expanding space defies all known concepts of rationality.  These technological wastelands drive the nation’s economy but leave the workers doomed to indifference and solitude.  With another outstanding musical score by Lim Giong, formerly working with Taiwan’s Hou Hsiao-hsien, Jia’s aesthetic is characterized by images of loneliness and alienation, often cast in silence, where the classical past comments upon the present, as the individual is sucked into this vacuous emptiness that is his place in life.  The violence in the film is often raw and brutal, but it’s shown alongside rampant corruption, grotesque factory accidents, low wages, human rights abuses, and spectacular wealth and growth, where according to the director, “The expansion in China has been so fast, there’s been no room for the system to catch up with any humanity.”  A brooding and atmospheric film, using disturbing genre forms to express his own personal outrage (and perhaps to connect to a wider mass audience), Jia offers a bravely honest and bewilderingly angry sense of defiance.
Posted by Robert Kennedy at 2:35 AM