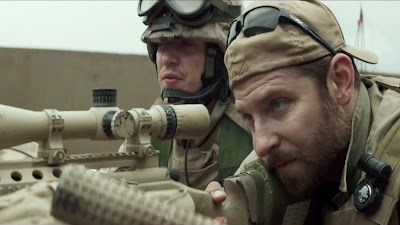 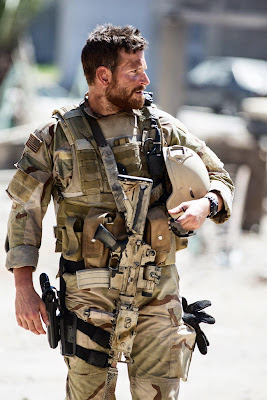 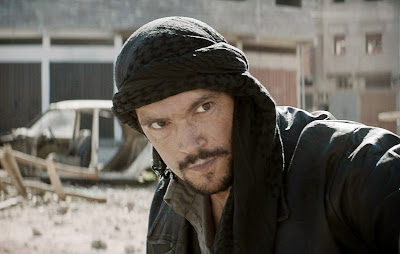 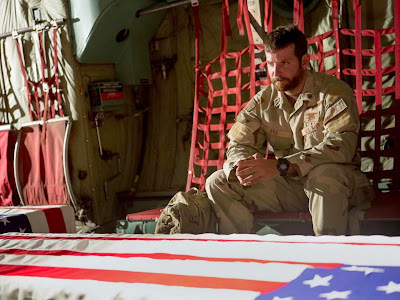 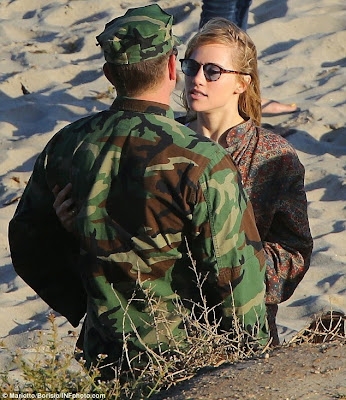 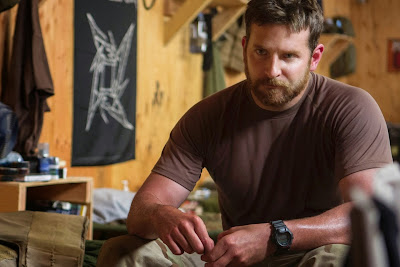 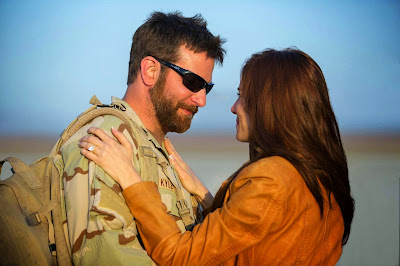 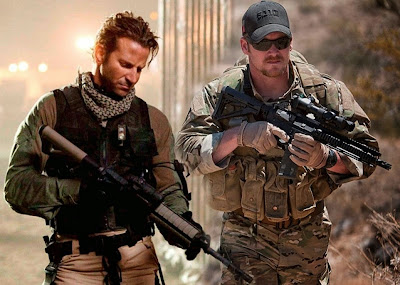 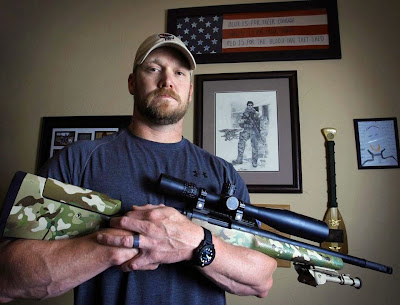 
This is a perfect example of utterly conventional Hollywood filmmaking, as it takes a simplistic, one-dimensional approach to war, patriotism, and serving one’s country, becoming a jingoistic portrayal of an American warrior who thinks he knows what his country stands for by asking no questions, where no reservations are expressed, instead it typifies the gung-ho spirit of the armed forces in much the same way as pro football player Pat Tillman was made the military poster child for enlisting in the Army in the aftermath of the 9/11 attacks.  His idea was to kick some terrorist ass in Afghanistan and Iraq, filled with an ideological certainty that borders on brainwashing, much like the nation’s bullheaded approach for invading Iraq in the first place, where it was inconceivable in Tillman’s eyes that America wouldn’t prevail.  Unfortunately, as the Amir Bar-Lev documentary The Tillman Story (2010) points out, it’s much more complicated than that.  This glorification of heroism is a throwback to Howard Hawks’ SERGEANT YORK (1941), released just months before America’s entrance into World War II, the story of a World War I sharpshooter that became a war hero, one of the most decorated American soldiers in World War I even as he was a devout pacifist, which won Gary Cooper an Academy Award for Best Actor.  Even Gary Cooper, however, was reluctant to play a “too good to be true” character, but reconsidered after meeting Alvin York, the real person the film was based upon.  Interestingly, according to Eastwood himself, that was the first movie he ever saw, so it obviously left an impression on him, just as the images from movies and historical photographs leave impressions on other young soldiers about how to behave during wartime, where they often emulate what they see.  Similarly, a bulked up and more bland, ideologically toned down Bradley Cooper is excellent in the real-life role of Chris Kyle, a down-home Texas cowboy who rode the rodeo circuit early in his twenties, but when he witnesses the 9/11 attacks, he reconsiders his future, enlisting in the Navy SEAL special operations force at age thirty (age 24 in real life, initially rejected by the Navy SEALS due to rodeo injuries) where he also excels as a sharpshooter and is sent to the front lines in Iraq.  As a military sniper, his job is to protect the Marines on the ground by providing an overview vantage point they don’t have, picking off anyone suspected of initiating attacks against the Marine operations.  Adapted from Kyle’s 2012 book written three years after his military discharge, American Sniper:  The Autobiography of the Most Lethal Sniper in U.S. Military History, even the title leaves little doubt as to what the focus will be, though his modest, single-minded claim is always that he was simply doing his job by protecting the lives of others.


While the film takes the viewer into the heart of ongoing military operations, almost exclusively seen through a guy’s perspective, it also has a stateside component where Sienna Miller as Kyle’s wife Taya offers a near-cringeworthy performance, though her character is horribly written and is equally one-dimensional, where she seems to have little sympathy or understanding for the unique adjustments soldiers must make upon returning home, as unfortunately they bring a bit of the war back with them.  Instead she nags at him continuously to be the person she married, telling him “I need you to be human again,” expecting him to adjust to her concept of a normal family life, while picking at him when he’s less than forthcoming about describing the horrors that he experienced.  Keeping much of his emotions locked in, it is only a matter of time before he is called back, as he is needed on the battlefield, eventually serving four tours of duty.  Easily the most overwrought and hysterical scenes are the ones when Kyle is in his sniper position in a moment of calm, casually talking to his wife back home, when suddenly a firefight will break out, cutting off normal communications, while she’s left whimpering on the other end of the line wondering what’s happened to her husband.  This guy is in special ops, for Christ’s sake, assigned the most dangerous missions, specially trained to be battle hardened, calm in the face of a storm, yet she doesn’t get it, remaining scared out of her wits and clueless about what this guy does for a living.  These scenes drain much of the energy from the picture, and there are several of them, where she becomes too much of a distraction, as it’s inconceivable to the public back home that wives would want to be on the phone with their husbands “during” military operations.  That’s exactly what could get them killed as it takes away from their primary focus at that moment.  The relationships with fellow soldiers may not get the same amount of screen time, but they are much more acutely drawn, as these guys understand each other, where they are trained to have each other’s backs, instilled with the same warrior mentality, yet they can also laugh in quieter moments, as they’ve each been through hell and back.


Certainly one aspect of war this film attempts to convey is the sense of urgency, where Kyle reflects the military mentality when he tells his wife that his family has time to wait, while the frontline soldiers don’t, which is what continually compels him to return.  Embellishing the mythic picture of an American hero, only Hollywood would come up with the storyline about a fellow sniper on the other side, a Syrian soldier fighting for al Qaeda named Mustafa (Sammy Sheik) who is actually an Olympic medalist in shooting.  Each is the best in their field, where the storyline continually pits one rival against the other, where much of it breaks down into a mind game, maintaining the psychological advantage, where these men become mythical legends within their own ranks.  Kyle is actually called “The Legend” by his fellow soldiers, where stories of his prowess spread throughout the military branches, where there’s a price on his head, dubbed the “Devil of Ramadi (Shaitan Ar-Ramadi),” placing a bounty on his head that eventually climbs to $80,000, which distinguishes him even in the eyes of the enemy.  This elevates his importance, as it reveals how essential it is militarily for each side to knock out the other’s best sniper.  Both are capable of inflicting huge casualties and altering the success or failure of significant missions.  Much of this is oversimplified, playing out like a western in the American West, inevitably leading to an ultimate shoot out, the winner being the anointed hero.  In Eastwood’s film, however, it nearly brings his unit down, as it exposes their position, subject to an unprecedented attack.  Taking place in a sandstorm, it has a dreamlike quality about it, turning into a battlefield of the dead, as men around them keep dropping like flies, but more continue to storm ahead, taking the place of those fallen beside them.  It offers a feeling for the senselessness of war, yet it’s also combined with the solemn tributes paid to those making the ultimate sacrifice, as Eastwood’s depiction of a military funeral is easily the best thing in the film, perhaps the only scene that touches the right grace note, (2014) soundtrack - Ennio Morricone -The Funeral - YouTube (2:05).  Kyle’s successive returns back home become more detached, told with little fanfare, yet the war continues to intrude into his life, where one of the Eastwood touches is Kyle continually hears the sounds of war taking place even when sitting comfortably on his couch back home, thoughts and sounds he wants to tune out and forget, where he can barely make eye contact or even acknowledge a soldier who graciously thanks him for saving his life.  The brief glimpse in hospitals of wounded veterans in recovery feels essential, even though it’s barely touched upon, preferring instead to dwell on the more dramatic war footage, where only at the end does the Hollywood depiction take a turn into vintage archival material, showing the actual funeral of a fallen hero, leaving the audience in the solemnity of a hushed silence, where the closing credits play with no accompanying music.