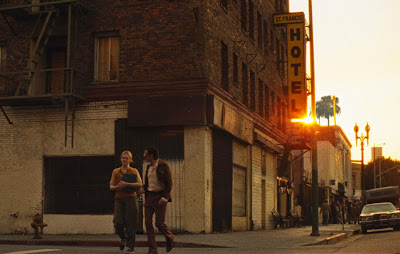 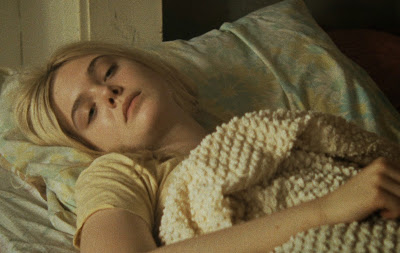 One day we’re walking down the street, passing a newsstand, when I stop and pick up a magazine (maybe Life) with Thelonious Monk of the cover. I kiss it, and say, ‘Hi Monk.’ Dad, combusting with pride, picks me up, looks at me with those beautiful gray-green eyes, and says: ‘From now on, you’re not just my baby, you’re my ace-one-boon-white-coon.’ That, he would claim, was the day we forever connected, and became more to each other than everything.

I  loved him out of all proportion, as only a daughter could.
—Amy-Jo Albany (Elle Fanning)

There’s usually an intriguing allure to films centered around the outer fringes of society, that delve into a bohemian, neon-lit subterranean world exposing hardships of the human kind that border on madness, where the pursuit of artistic freedom becomes more than a passionate endeavor but a moral obligation, often lost in the smoky haze of narcotics and drug abuse, where in the words of American poet Allen Ginsberg in his epic 1955 poem Howl, Howl, Parts I & II | Academy of American Poets:

I saw the best minds of my generation destroyed by madness,
starving hysterical naked,
dragging themselves through the negro streets at dawn looking
for an angry fix,
angelheaded hipsters burning for the ancient heavenly
connection to the starry dynamo in the machinery of night,
who poverty and tatters and hollow-eyed and high sat up smoking
in the supernatural darkness of cold-water flats floating
across the tops of cities contemplating jazz

Written by his daughter Amy-Jo Albany (Elle Fanning), Low Down:  Junk, Jazz, and Other Fairy Tales from Childhood is a 2003 memoir by the daughter of a legendary but obscure jazz pianist Joe Albany (John Hawkes), one of the few white pianists to play Bebop with Charlie Parker in the 40’s and 50’s, but also a heroin addict and prison convict for a major part of his life.  Growing up on the dingy side of Hollywood among addicts, prostitutes, and various social misfits, the film is a dim reminder of what jagged edges some lives become, where every day is a struggle to survive, much of it lost on wasted opportunities.  Less about Albany’s chronic drug troubles and run-ins with the law, the film is more about a young adolescent’s rose-colored view of her father, trying to make sense out of the chaotic turmoil that was her life growing up in the 70’s, where she substitutes her interior heartache with larger-than-life embellishments of her father, making him out to be some kind of mythical hero.  Blind to the adult realities, her father a junky, her absent mother Sheila (Lena Headey), a former singer and full-time alcoholic, the overall tone is confusing and the story uneven and unfocused, filled with various recollections that rarely get under the surface, basically becoming a primer course on how to destroy your life and the loved ones around you.  Through it all, however, she prevails and writes the book, which is the point of the film, though despite a gutty performance by Fanning, she’s not really the interesting part of the story.  Joe’s the guy we’re interested in, as there’s so much about him we don’t know, but his life is largely unexplored and for long periods of time he’s not even in the picture, as Jo is shipped off to grandmother’s house, none other than Glenn Close, a six-time Oscar nominee looking surprisingly like Robin Williams in MRS. DOUBTFIRE (1993).  On Friday nights Gram is glued to the screen watching boxing matches, and on one wall in her home she has on display that legenday photo of Black Panther Party co-founder and Minister of Defense Huey P. Newton (seen here: Huey Newton.).  What’s also uniquely intriguing, but never explored, is the drug addiction of a jazz pianist, as more typically the addicts are horn players and lead singers, or both.  The piano is more of a percussive instrument in Bebop jazz, like Thelonious Monk (Jo’s idol in the opening quote), a driving, rhythmic force in simpatico with the drums and bass players, where you’d think they need to be clear-headed and sharp to play some of the more complicated arrangements.

Surrounded by dysfunction, Jo is the worried daughter that spends much of her youth looking after the interests of her father, trying to maintain control and be the adult in the situation.  While Joe played with jazz legends Lester Young and Charlie Parker, it was more than a decade ago, as we only hear about it in offhanded conversations or in fan photos that decorate Jo’s bedroom walls.  When we see him play, he’s in some anonymous jazz trio in small clubs or off in some dingy bar somewhere playing alone.  By the time Jo is old enough to remember her father, the Bebop era is largely over, where the American disinterest in jazz (and repeated parole violations) drove Joe overseas to Europe.  After several years of repeated drug offenses, his passport is revoked and he’s sent back to America, revelations that are part and parcel with her growing up stage, as a stream of more unpleasant realities begin to creep into her life.  Joe’s life descends into a morass of addiction, where he simply can’t stop himself from using, becoming more gloomy and fatalistic, where by the end of the film each character has a major dramatic moment, as if Jo is revisiting her final moments with each of them, allowing them perhaps to finally just be themselves, naked and unvarnished, and not some embellished memory.  Why couldn’t the rest of the film be like that?  These brief moments suggest a much better film could have been made without the naïve innocence and child adulation that constantly comes in conflict with overtly traumatic subject matter.  While the director attempts to establish a turbulent family relationship, what plays out onscreen is continuously self-destructive and troublesome, leading to dramatic meltdowns and melodramatic overreach instead of real, full-fledged character development.  Chalk this up to inexperience.

Despite a brief recording career in Europe and a few more sessions in the 70’s, Albany is largely unrecorded in the prime of his life, where a single 1957 LP exists entitled The Right Combination with Wayne Marsh on tenor sax and Bob Whitlock on bass.  The first song we hear in the film is Angel Eyes, where ironically one of the definitive, narcotic-induced renditions of this song Gene Ammons - Angel Eyes - YouTube (8:52) is played by Chicago tenor saxophonist Gene Ammons, another addict who spent much of his life incarcerated for narcotics possession.  Albany is a non-stop smoker throughout, as much a part of the jazz scene as alcohol or heroin, where the low ceilings and poor ventilation in the clubs also increased the health risks.  The film is infused with classic jazz music of the era, like Coleman Hawkins, Thelonious Monk, and Max Roach, with an extended piece played live before an audience by Albany over the closing credits, shot in grainy Super 16mm by Christopher Blauvelt, where the first-time director attempts to capture the atmospheric look of the dingy rooms and smoky clubs, but next to no insight develops here, as the depressive, downbeat mood overwhelms any attempt to reveal something significant, becoming more of an adolescent diary format from a young girl coming-of-age.  Much better films are Bent Hamer’s Factotum (2005), exquisitely shot on 35mm, similarly exploring the seedy world of Los Angeles as it follows a fictionalized world of drunk poet Charles Bukowski, also Philippe Garrel’s I Don’t Hear the Guitar Anymore (J'entends plus la guitare) (1991), an autobiographical film that reveals the ten year romance of the French film director with Velvet Underground singer Nico, much of it spent in the throes of drug addiction and a constant fix, an unglamorous view that is downbeat and utterly sad, where an unsparing confessional tone is mixed with a raw internal dysfunction, with outstanding original music by French jazz pianist Faton Cahen, a piano and a few ascending jazz riffs on a sax, offering an eloquent testament to a narcotic induced haze.
Posted by Robert Kennedy at 12:00 AM