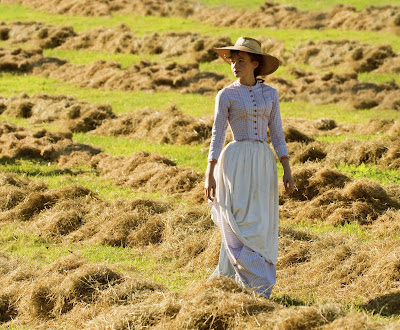 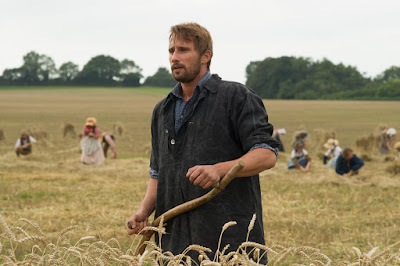 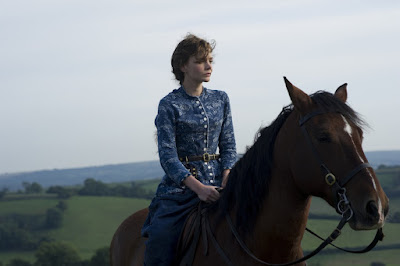 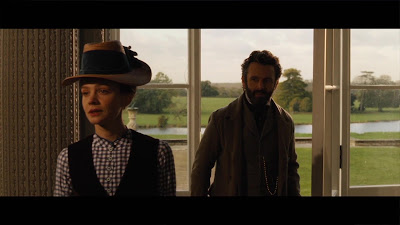 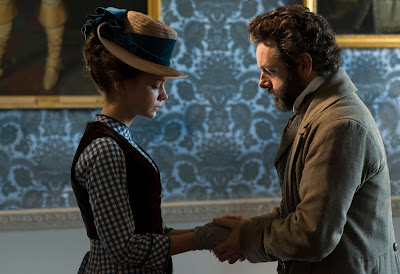 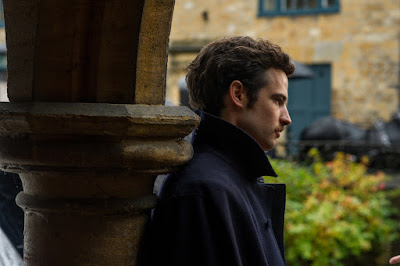 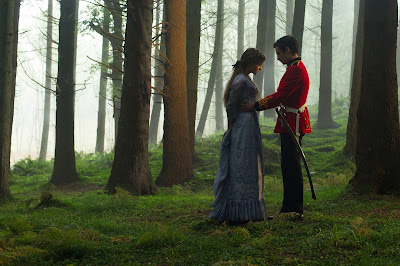 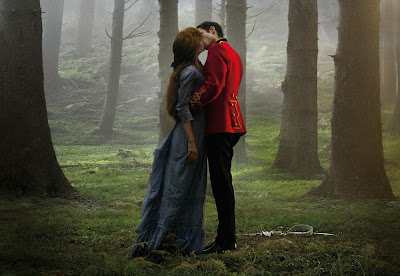 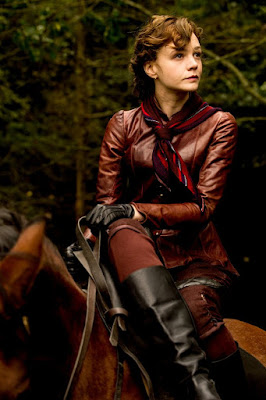 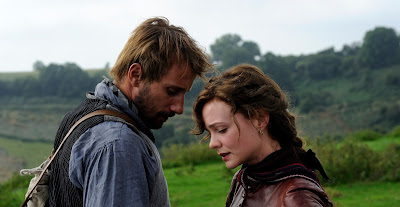 
Far From the madding crowd’s ignoble strife
Their sober wishes never learn’d to stray;
Along the cool sequester’d vale of life
They kept the noiseless tenor of their way.


"Elegy Written in a Country Churchyard", by Thomas Gray, 1751 (excerpt)


An epic and sweeping romantic story of long-repressed love, based on the 19th century Thomas Hardy novel set in the Victorian period of the 1870’s, his fourth and first successful novel, listed at #10 in a 2007 Guardian poll (Emily Brontë hits the heights in poll to find greatest love story) of the greatest love stories of all time, which follows the exploits of a feisty, determined, and extremely independent woman, Carey Mulligan as Bathsheba Everdene, initially seen confidently riding a horse galloping through the English countryside of rural Dorset, supposedly 200 miles from London, where the idyllic pastoral beauty of south and southwest England is described in the book as Wessex, based on the real locations of the author’s birthplace but given a somewhat fictionalized and dreamlike embellishment.  Hard to believe this is the same director whose “vow of chastity” forsook the indulgences of special effects, musical scores, props or sets, special lighting, post-production modifications and other technical wizardry as one of the original founders of the short-lived Dogme 95 movement, the maker of THE CELEBRATION (FESTEN) (1998), one of a small cadre of artists insisting upon naturalism, accentuating the artistry of the performers instead of the influence of the studio.  While authenticity was the goal then, this film has all the Hollywood grandeur and style of big budget spectacles made during the height of the studio era, though made for a fraction of the cost.  Nonetheless, the look of the film is spellbinding, all shot on actual 35 mm film (and it shows!), beautifully captured by the luminous and vividly textured cinematography of Charlotte Bruus Christensen, who also shot Vinterberg’s previous film The Hunt (Jagten) (2012).  As Hardy’s most pastoral novel, a good portion of the book consists of detailed descriptions of the landscape and farming techniques, expressed in the movie through the visuals of green rolling hills and an attachment to the land that is everpresent throughout, paying homage to Dovzhenko’s EARTH (1930) with utterly spectacular shots of peasants working in the fields, yet captured here in glorious color, where the painterly images of harvest scenes are perhaps only exceeded by Terrence Malick’s gloriously filmed masterpiece DAYS OF HEAVEN (1978).  While adapting Jane Austen novels may be the preferred pre-Victorian author to grace the cinema screens, usually given a more modernist, feminist perspective, Thomas Hardy has hardly been shortchanged, as Michael Winterbottom’s JUDE (1996), an ultra bleak adaptation of Hardy’s final 1896 novel Jude the Obscure, starring a hauntingly beautiful 20-year old Kate Winslet, remains one of the extraordinary romantic tragedies on record.  Hardy novels don’t typically result in upbeat, feelgood movies, as it’s clear Victorian women had fewer choices, so those that actually made the best of their limited options were seen as stronger and more aggressive, making excellent role models for the women of today, and while this may not have the awesome visual power of Roman Polanski’s TESS (1979), whose majestic agricultural scenes are also compared to Malick ("Girl, interrupted; Roman Polanski's Tess (1979)"), Mulligan’s fiercely winning performance is far more likely to produce smiles rather than tears.


Without providing any backdrop for the story, Bathsheba is educated, self-aware, and essentially a modern young woman living on her own with her aunt, having a chance meeting with a neighboring sheep farmer, the introverted, muscular, and hardworking Gabriel Oak (Matthias Schoenaerts) who is taken by her somewhat out-of-character, bold and proudly defiant manner.  They develop a quick friendship, where he makes a surprisingly blunt proposal of marriage, claiming the farm he leases could easily become their home.  While flattered, she’s afraid to give up her independence, something she values more than a husband.  The winds of change offer each of them a unique twist of fate, where Bathsheba inherits a mammoth estate in Weatherbury from her uncle, one of the largest farms in the region, making her instantly wealthy, while in a dreamlike sequence a crazed and inexperienced sheep dog drives Gabriel’s sheep over a high cliff, a scene made especially dramatic over the rugged coastline of the Golden Cap, killing them all while leaving him penniless.  Traveling the roads, looking for a job, he comes upon a blazing fire in the night, where he immediately pitches in and actually saves the barn almost singlehandedly by daringly putting out the fire on the roof.  In the aftermath, when asking the owner for a job, he’s surprised to learn it’s Bathsheba, their positions now reversed.  She hires him as the foreman in charge, while she is almost never seen again without her own trusted maidservant Liddy (Jessica Barden), from whom she learns all the latest gossip and news.  Together they form a female alliance against a bartering monopoly of men, who customarily do all the buying and selling of crops along with the various necessities, including her neighboring landowner William Boldwood (Michael Sheen), a prosperous farmer who is proud and aloof and likely more than twice her age.  Despite this difference, he is smitten by her playful and zestful charm, stirring emotions he felt were altogether lost.  Offering to combine their estates through marriage, she views it more as a business decision than a matter of the heart, stringing him along while she seeks better offers, which arrives on her doorstep in the form of a gallant soldier, Sergeant Francis Troy (Tom Sturridge), who fits the bill as a dashing Prince Charming.  While Gabriel sees through the young man’s veneer and warns Bathsheba not to get too interested, she’s aroused by his charm and masculinity, and perhaps his scarlet red uniform, which he displays in an erotic display of swordsmanship.  Knowing little to nothing about him, she loses all self control and finds herself lost in her sudden euphoria, marrying him on the spot, an impulsive act she lives to regret, discovering the pain and humiliation of realizing she can’t control the repulsive actions of others, as Troy quickly leaves her in debt with excessive drinking and gambling problems.  When a woman from his past suddenly reappears, but just as quickly dies in childbirth while carrying Troy’s child, he shuns his new wife, brazenly telling her “This woman is more to me, dead as she is, than ever you were, or are, or can be.”


When her husband puts an end to his misery, leaving his uniform onshore and swimming out as far as the fates would have him, his death is considered no loss to anyone.  Boldwood renews his interest in pursuing Bathsheba, willing to pay off all her husband’s debts, even agreeing to allow Gabriel to run both farms, as his closeness to Bathsheba is evident, loyal, overprotective, always looking out for her interests, usually expressed in furtive glances, where they are likely the subject of scandalous rumor that Boldwood is too remote from hearing.  After a particularly successful harvest, the entire staff has a dinner party, celebrating with drink and song, where Boldwood unexpectedly drops in, hoping for an answer, while Bathsheba is persuaded to perform a song, singing Let No Man steal Your Thyme - Carey Mulligan (From "Far ... YouTube (2:57), a traditional British and Irish folksong that lyrically warns young people of the risks and dangers of taking false lovers.  While promising him nothing, Boldwood is emboldened, feeling the time is right, that she will finally accept his offer.  Making all the necessary arrangements, he holds a lavish Christmas Eve party sure that he will win her heart, but Bathsheba feels even more suffocated, prematurely walking out of the party when she suddenly encounters her husband, not dead after all, but drunk, broke, and in a ragged state, rudely ordering her about, grabbing her arm, claiming her as his property, causing her to scream in fright.  Boldwood shoots him dead on the spot, just as Gabriel had earlier shot his deranged sheep dog.  Spared the death penalty, calling it a crime of passion, he’s nonetheless imprisoned and out of her life forever.  Despite her best intentions, she realizes she has an impact on the lives of others, even unintentionally.  While she’s initially seen as carefree and irresponsible, seduced by her own ideas of freedom, but later becomes more ruthlessly aloof, deluded by her own power, caught up in a battle of wills, completely unaware of the suffering she brings others, who are themselves consumed by thoughts of her that amount to little more than male fantasy, often languishing for years in a state of emotional paralysis, waiting for the right opportunity that never comes.  Using Craig Armstrong’s musical score to capture emotions that the characters themselves are unable to express, Bathsheba utters one of the most eloquent lines late in the film, “It is difficult for a woman to define her feelings in language which is chiefly made by men to express theirs.”  Much of this picture reveals the gulf that lies between the words that are never spoken, the hopes, the desires, the repressed dreams, and the unintended consequences that often haunt people to their graves, all shown in a choreography of body language and facial expressions.  The Victorian era did not allow straightforward honesty, as people were defined by their class status and social standing, where thoughts were expressed through the power of suggestion.  While the lower classes could speak freely amongst themselves, it was considered impudent to speak frankly and openly to one’s employer, unable to cross the class barrier, where it was required to hold one’s tongue.  Is it really any different today?  The social divide between Bathsheba and Gabriel effects every conversation they ever have, becoming an insurmountable obstacle throughout most of the film, a long-suffering open wound that can only bleed and fester, but concealed and out of sight from everyone else.  It was a private world one lived in, lost in their own reveries and rhapsodic thoughts, where any thoughts of reaching a connecting understanding is more of a mirage that rarely intrudes into their actual lives.  The liberating, feminist sentiment is provided by our own, modern day vantage point, knowing full well that even under today’s more open circumstances, true communication is a lost art, where people continue to drown in their own repressed and often agonizing sorrows and regrets, unable to change those few haunting and fateful moments that seem to forever define our lives.
Posted by Robert Kennedy at 12:00 AM