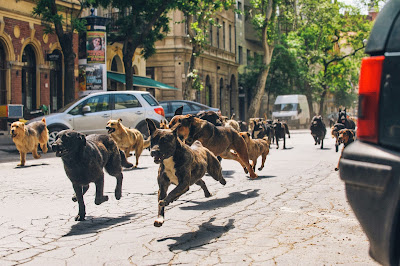 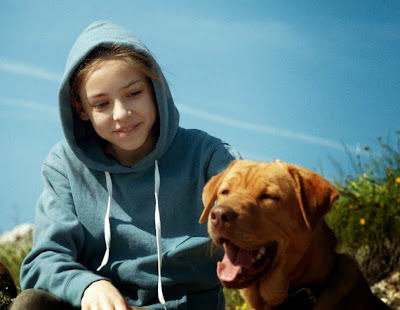 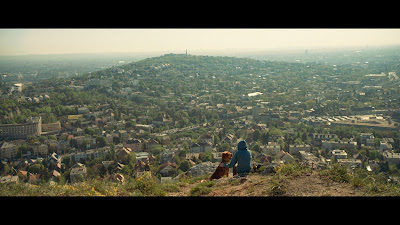 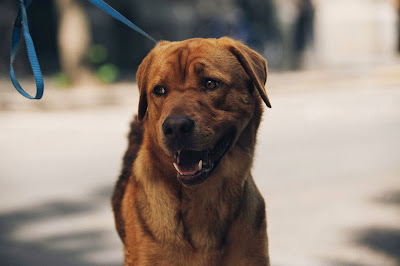 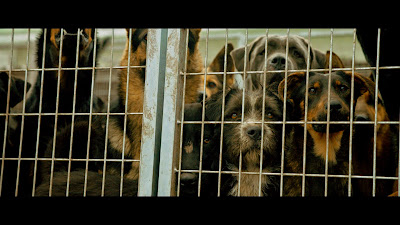 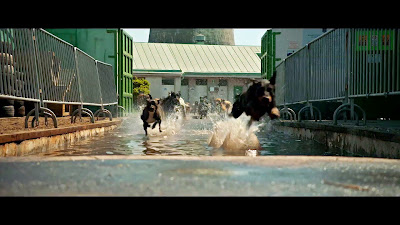 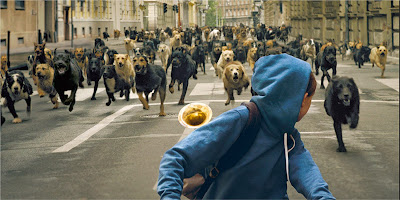 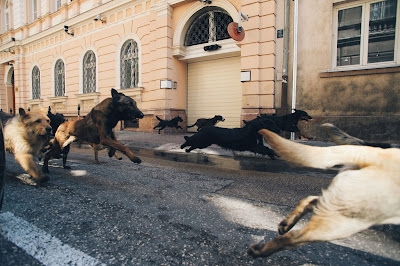 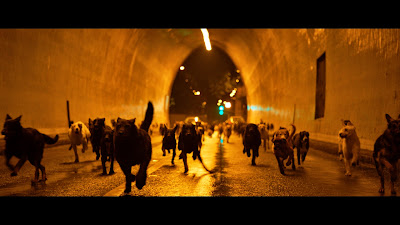 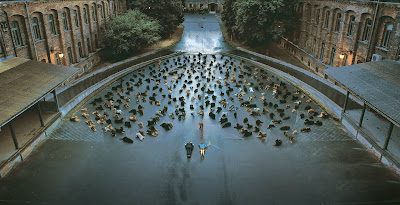 
It’s no secret that after the films I’ve made thus far, I am turning towards genre experiments. The first installment of these is White God, inspired mostly by preposterous and increasingly rancorous present-day social relations. In my view, parallel to the questionable advantages of globalization, a caste-system has become more sharply defined: superiority has truly become the privilege of white, Western civilization, and it is nearly impossible for us not to take advantage of it. Yes, us. After all, we are the members of this privileged mass. Hence, I would like to create a film which allows a glimpse of the passions raging on the other side, criticizing our detestable self-confidence, full of lies and lopsided truths, set on domesticating the minorities while actually wishing only to destroy them, hypocritically denying inequalities, not believing in either peace or in peaceful cohabitation. Nevertheless, I have chosen animals as the subject instead of minorities. I did this, because I wanted to focus freely on this sensitive subject; as freely and with the least amount of taboos as possible. Therefore, I tell the story of animals, a dispossessed species that was once man’s best friend. But man has betrayed them, and in turn, they revolted against their former masters and companions in order to validate their existence.


The film can be described by mingling the words adventure, revenge, rebellion, and heroism. I would like the topoi of vengeance films and the allegorical qualities of animal stories to merge in this film in a dynamic, thrilling, and undeniably emotive way. There is no question that when faced with betrayal and friendship, the audience must take sides. I would like Lili, the thirteen year-old girl, to be our mirror. Through her actions, we will be confronted by the mechanism of confabulations. Her coming of age will be the alarming example of what we hope never to raise our children to become. Still, because Lili is a courageous girl with a pure heart, in the end, she is brave enough not to step in line ... our line; the line of fathers and parents. She has the courage to rebel and contradict, to lay down her arms, even at the possible cost of her own life.


My goal is for us to root for Hagen and Lili together. For Hagen to fight back; for Lili to understand that Hagen’s rebellion is just. By way of this, we too can be cleansed and return home with the knowledge that the decision is in our hands: we have the choice not to become phony, deceitful adults. This film interweaves melo-drama with the characteristics of adventure and vengeance movies. My intention was to demonstrate that mankind and beasts share the same universe. Only if we are able to position ourselves in the place of different species do we have the chance to lay down our arms.


While an entire industry has arisen around animation or computer special effects in movies, less noticeable are the use of animal trainers, especially when considering how minimal their influence usually is when conceiving the artistic vision of a film.  Perhaps more so than the director himself, the driving force behind the success of this film must be attributed to animal trainer Árpád Halász and animal department coordinator Teresa Ann Miller, as the performances from the more than 280 dogs are shockingly convincing, both when seen individually, but also collectively as a group, where the choreography of the animals is so uniquely original that it harkens back to the extraordinary artistic vision of recently deceased Hungarian director Miklós Jancsó, to whom this film is dedicated, whose films THE RED AND THE WHITE (1967) and RED PSALM (1972) feature breathtaking camera shots of horses, where no one choreographs the movements of horses like Jancsó.  While Kornél Mundruczó is a prominent Hungarian director whose last five features have all played and/or premiered at Cannes, it’s still somewhat surprising that this film was chosen as the Best Film in the Un Certain Regard category that included Lisandro Alonso’s JAUJA (2014), one of the highest rated films at Cannes from 2014, Cannes critics ratings, (especially considering the Jury President was fellow Argentine director Pablo Trapero), but also Ruben Östlund’s Force Majeure (Turist) (2014) and Wim Wenders superb documentary The Salt of the Earth (2014) that was awarded a special prize.  That said, the story bears a startling resemblance in theme and spirit (not to mention a title inversion) to Sam Fuller’s WHITE DOG (1982), as both are allegorical comments on the human condition, where the treatment of dogs is a harsh reminder of how we view and treat minorities, as if they are a subhuman species.  While the dogs are extraordinary, along with the cinematography of Marcell Rév, the humans in the picture never rise above stereotypical depictions, where the beautiful handling of the animals is undermined by the poorly written performances of the humans, especially the male characters who come across as heavy-handed brutes, a common characteristic that recurs in every Mundruczó film, perhaps systematic of the ultra-repressive, male dominated Eastern European political regimes. Nonetheless, these poorly written characters undermine all of Mundruczó’s efforts, as they appear one dimensional and overly simplistic, lacking the kind of complexity most of us witness every day, where humans are instead perceived as a work in progress.


What perhaps distinguishes this work is its adherence to the horror genre, especially the rebellion of a mistreated animal species, using a sci-fi twist that veers into Hitchcock’s The Birds (1963), becoming an apocalyptic cautionary tale.  While its aim may be to peel back a layer of grotesque human behavior, it lacks the depth and poetry of Bresson’s Au Hasard Balthazar (1966), arguably the greatest animal movie ever made, defined by the extraordinary breadth of its grace and compassion, and instead provides a steroid-fueled version of unleashed anger gone amok.  At the center of the film is a dog named Hagen, where everything that happens is seen through his eyes as he goes from one harrowing adventure to the next.  Initially he is the companion to Lili (Zsófia Psotta), a child of divorce, a young, somewhat sullen 13-year old girl who is seen being dropped off by her mother with her estranged father Dániel (Sándor Zsótér), where friction immediately develops as he lives in a building where dogs are not welcome.  Neighbors complain, Dániel denies he has a dog, forcing Lili to lock him up in the bathroom, which of course leads to continual barking coming from his home, which she’s able to calm by playing her trumpet.  We discover they are in the center of an even larger controversy, as Budapest is charging a government imposed “mongrel” fine, an exorbitant tax to own mixed breed dogs, preferring pure bred, pedigreed dogs, causing owners to unload their mutts onto the street to avoid payment, where the animal shelters are soon overrun, creating an epidemic of wild dogs running free.  Following an incident in school where Hagen’s presence nearly gets her kicked out of the band, where her music instructor refuses to allow a dog, Lili runs out of options.  Despite fighting desperately to hold onto him, finding the ban cruel and hurtful, as dogs offer a friendship often lacking in society, her father forces Lili to get rid of the dog, leaving him on the side of the road and driving away, forcing Hagen to fend for himself.  Like a subspecies of creatures, the stray dogs are forced to survive against impossible odds, constantly chased by sadistic dogcatchers, where they quickly learn evasive maneuvers.  The audience is quickly sucked into an “us against the world” mentality, as the dogs are besieged at every turn by a rigid authority that wants to get rid of them.  Hagen’s cycle of survival is emotionally taxing, as at first he survives by his wits, gaining the audience’s sympathies, often through humorous methods before being tricked by an underhanded street beggar that sells him to a ruthless dog fight trainer who’s only interest is making money, converting Hagen into a ferocious Alpha male that is brutally trained to rip any opponent to shreds or be killed himself.


Other than the blunt realism of PLEASANT DAYS (2002), which remains arguably his best film, Mundruczó has used artificiality to almost mythic effect, where JOHANNA (2005) is the most uniquely outrageous, a full-blown 20th century expressionist opera on sin and redemption, while the stunning visual beauty of DELTA (2008) defies the Edenesque brutality that follows, all suggesting a world gone wrong, a poetic variation of Paradise Lost.  Similarly, WHITE GOD turns into a nightmarish fever dream where Hagen’s transition from affectionate pet to mad dog killer defies belief, escaping from his cage where he’s continually seen wandering desperately through a jagged urban wasteland charged with ever more difficult obstacles to overcome, eventually captured yet again, placed in a kind of solitary confinement for obstinate dogs, a private room that may as well be a doggy death row where he witnesses another dog being put to sleep, where incredibly Hagen glances up at a television playing Tom and Jerry cartoons, perhaps a wry comment on how easily we’re appeased while surrounded by human savagery.  Apparently this is the inspiration he needs, as literally moments from suffering a similar fate he leads a death defying escape, causing a canine revolt on the proportion of the Spartacus (1960) slave rebellion, where the chaos that ensues takes the city by storm and the stunned populace by surprise, where the city is literally overrun by wild packs of liberated dogs, all of whom have been treated with sadistic brutality and malevolent disdain.  Led by Hagen, the unleashed animal fury of hundreds of mixed bred dogs racing through the streets in mass is an impressive sight, like water gushing through a sudden opening in a dam, where the accompanying surge of freedom couldn’t be more powerfully expressed.  This kind of metaphorical furor must resonate even more powerfully in Eastern Europe where so many nations were forced to submit to a post-war Soviet military presence, leading to lengthy periods of occupation.  Unfortunately, the film meanders into mystifyingly strange territory, where the human presence simply deflates the build-up of energy, resembling the mayhem in the streets caused by King Kong (1933), “often imitated, never equaled,” or GODZILLA (1954), where Dániel is actually seen with a Rambo-like flamethrower to protect himself against this formidable enemy, adding a cartoonish element to an otherwise riveting moment, leading to an ultimate showdown between man and beast.  While the idea itself can be dramatically compelling, the execution leaves something to be desired, lost in the reverie of a childlike innocence where a naïve hope becomes the only option.  The final sequence is a stunner, filled with sorrow and pity, which may pull at the heartstrings while viewers may also be equally astounded at how they could pull it off without CGI effects.  The human depiction is overly predictable, while giving human traits to animals is always a precarious ordeal, yet the film does offer a voice to the voiceless, where it at least hopes to build empathy for those who have been mistreated and brutalized the most, where their marginalized status is seemingly taken for granted in the growing complacency of the modern world.
Posted by Robert Kennedy at 12:00 AM