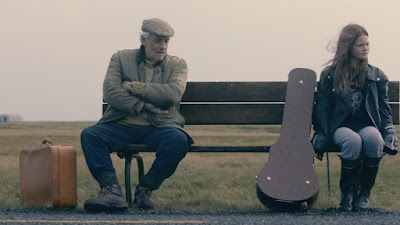 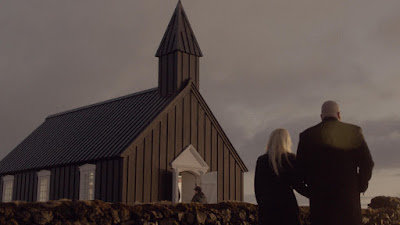 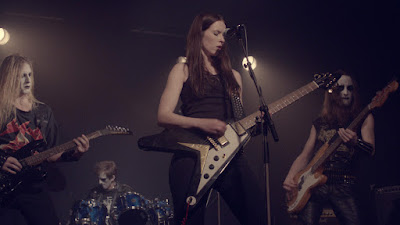 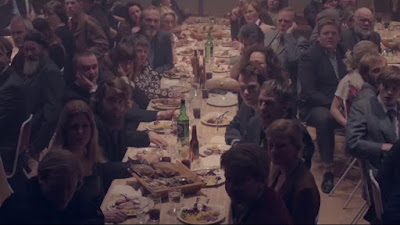 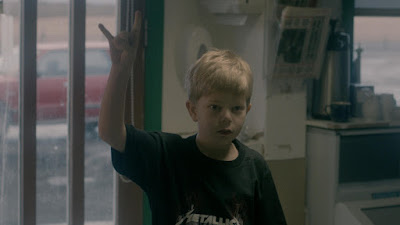 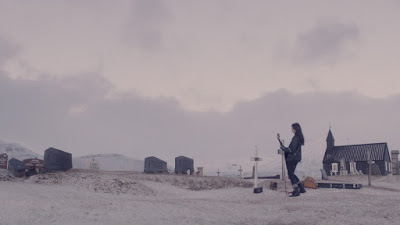 A small gem of a film from Iceland, one that resonates on far deeper levels than one might presume, and raising eyebrows in the process.  While the title and movie poster suggest some kind of homage to a 70’s music group like Kiss, the film itself moves in a completely different direction, becoming a portrait of youthful alienation in an isolated rural setting of a smalltown family farm.  Opening with a tragic farming accident, 12-year old Hera witnesses the startling death of her older brother Baldur, leaving behind an inexplicable void that haunts every frame of the rest of the picture.  But rather than dwell on typical stages of grief and loss, this well-written film uses deadpan humor to great effect, becoming an absurdist road movie about a rebellious teenager Hera (Thorbjὃrg Helga Thorgilsdόttir) who always dreams of leaving home and heading for the city, spending the better part of her life talking about it, but somehow never goes through with it, despite multiple attempts, where one of the lingering images of the film is seeing her sitting alone at a bus stop, a lone outpost in the vast emptiness of the region, often remaining there even after the bus passes, remaining stuck in the claustrophobic confines of a conservative smalltown family and community that embraces her, even as she utterly rejects them.  In a wordless sequence that jumps forward a few years, Hera burns all her old clothes and instead grabs a few metal T-shirts like Slayer and Megadeth from Baldur’s room, that remains exactly as it was throughout, like a shrine to his existence.  Leaving her own identity behind, she instead immerses herself in Baldur’s black leather jacket and his electric guitar, playing his favorite metal music at disturbingly high volumes, expressing her thoughts on the matter, “They say time heals all wounds.  That’s utter bullshit.”  Reverberating with defiance and dissatisfaction, the film is an expression of her refusal to conform, a headstrong character continually seen butting heads with her parents and neighbors, who are often seen bringing her home, passed out in a state of intoxication, usually with one of their tractors missing which she appropriated for one of her midnight joy rides.  As much a comment on the uniqueness of the region as her own state of mind, the secondary characters are all equally well sketched out, especially her own parents, the quietly stoic and mild-mannered milk farmer Karl (Ingvar Eggert Sigurðsson) and his devoted wife Droplaug (Halldóra Geirharðsdóttir), both of whom suffer in silence with a kind of muted dysfunction.

Seemingly on the road to nowhere, Hera remains emotionally trapped and conflicted, caught between the life that took her brother and her own inability to strike out on her own for fear of losing whatever connection still exists between them.  But more than any character, the true subject and most outstanding feature of the film is Iceland itself, beautifully shot by August Jakobsson, particularly wide-angled shots that extend to distant horizons, revealing a mountainous, snow-filled landscape that couldn’t express more natural beauty.  Interesting, then, that much of this was achieved through special effects, as seen here, Metalhead Visual Effects YouTube (3:21).  As improbable as it may seem to many, filling the endless expanse with Judas Priest and Dio blasting away from her tape deck, while composing a raw version of her own song, featuring blood-curdling screams to the startled cows while amped up at full blast in the barn for a truly primitive sounding recording, Svarthamar Demo OST - YouTube (5:42), it works better than expected, as it’s a tribute to the glory days of metal bands like Riot, Teaze, Savatage, Lizzy Borden, Judas Priest, and Megadeth, whose anguish perfectly expresses Hera’s own silent rage.  In a Scandinavian nod to Ingmar Bergman, it seems every scene shot in the cold stillness of frozen farmlands is beautifully juxtaposed against the inner grief tormenting Hera and her family.  Winner of eight Icelandic Film Awards (nominated for 17 awards), including Best Actress, Best Supporting Actor and Actress, Best Editing, and Original Score, the film was at least partially inspired by the Norwegian black metal church burnings in the 1990’s, where a wave of arson attacks against Christian churches resulted in at least 50 church burnings by 1996, nearly all attributed to followers of black metal who bitterly opposed Christianity and organized religion as a whole.  Without delving into any historical reference, the film incorporates this sentiment into the much simpler times of a country town in Iceland in the late 80’s and early 1990’s, starting quite slowly, but eventually picking up the pace, allowing the viewers to identify with the characters.  Thorgilsdόttir as Hera is especially outstanding, particularly the way she earns the audience’s sympathies despite behaving despicably throughout, regularly playing mean-spirited juvenile pranks, continually ostracizing her parents, making their lives a living hell, where we feel her pain and don’t-give-a-fuck ambivalence while relying upon the friendship and kind support of her somewhat devoted childhood best friend Knutur (Hannes Oli Agustsson), a fellow metal aficionado, though in utter exasperation he finally confesses near the end that he has always hated Dio.

With characters damaged by the remoteness of their surroundings, Hera is at odds with the people and the place where they live, where everything feels too ordinary and small for her.  While essentially a film of Hera’s personal struggles, the film also adds insightful details to her parent’s issues with intimacy, where their son’s death has become an unspoken wedge between them, eventually finding a way to turn the page, which may come as something of a surprise considering their daughter’s continued recalcitrance.  They continually remain a part of the town through regular church visits and community social functions, where the presence of a new young priest, Janus (Sveinn Ólafur Gunnarson), acts to help facilitate this change.  For Hera, however, she feels betrayed, especially after he opens up to her and acknowledges his own metal past, suggesting “God can also be found in the dark,” displaying a particular affection for Iron Maiden, Venom, and Celtic Frost.  She proceeds to see him differently, however, misunderstanding his helpfulness for something more personal, precipitating a full-scale rage against God that has deep-seeded ramifications, including a church burning.  Alone against the world, carrying the burden of her brother’s soul along with her, she goes on an existential quest for meaning, a surprising odyssey into the mystifying elements of ice and snow that takes on surreal implications, where she seems to hit a wall of resistance, realizing she can simply go no further, as if to surmise rebellion isn’t enough.  In an awkward and uncomfortable moment, she does the unthinkable, failing to move on to the city, as everyone suspects, as this would be the opportune time, instead retreating back home to the hushed stares of everyone.  This is a particularly telling moment, as she is who she is, troubled and defiantly aggressive, a problem child that belongs to the entire community at large, where no one knows what to do with her, especially her family, though there is an unspoken feeling of forgiveness and reconciliation.  What does transpire is completely unexpected, where out of the blue some adoring Norwegian metalheads arrive on her family’s doorstep after hearing a tape of her music, something they describe as “wickedly evil,” but meant in the best possible light.  Their genuine interest revives her own sagging spirit, helping to rebuild a community that Hera herself has broken, and in what is perhaps the scene of the film joins Hera in playing a concert before the entire town, where the faces of all the musicians are painted except Hera, who stands before everyone in a confessional moment of rage, with piercing screams and cries of agony, before toning it down into Björk-like poetry, malmhaus scene YouTube (4:16), a dark revelatory moment where mood says it all, that brilliantly brings together all the feelings of pain, anguish and insurmountable loss, where music becomes an outlet for healing.  For all the gloominess and sad melancholy that pervades throughout this picture, like an incessant stormcloud hanging overhead, there’s also an equal amount of gentle wit and wry humor, and while plunging into the inexplicable depths of how people react when dealing with grief and tragic loss, it’s a unique, beautifully told coming-of-age story that provides a personalized, firsthand glimpse into rebellious and ostracized youth.
Director Ragnar Bragason Lists Top Five Metal Songs ...  Revolver magazine, March 31, 2015

Winner of 8 awards at the 2014 Icelandic Film Awards, ‘Metalhead,’ is a film directed by Ragnar Bragason that follows a young Icelandic girl whose love for metal stems from witnessing the gruesome death of her metalhead brother. Her passion for metal only deepens as she gets older, despite facing alienation from her community and family who remain in shambles following their son’s death.

Bragason picks his Top Five Songs that appear in the movie.

1. Judas Priest, “Victim of Changes”
“From ‘Sad Wings of Destiny.’ A key moment in the history of metal and a key song in the film. That piercing scream by Halford still resonates after 40 years. A film titled ‘Metalhead’ can’t be without a Judas Priest track.”

2. Savatage’s “Strange Wings”
“From ‘The Hall of the Mountain King.’ A great song but often overlooked because of the number of exceptional songs on that album. When writing the script, I was looking for a song that reflected the main character, her alienation and uniqueness–both in feel and lyrics. Opening line is, ‘She is a native of the stormy skies.’ A great opening riff by the late Criss Oliva.”

3. Lizzy Borden’s “Me Against the World”
“An ’80s classic for sure. Originally I intended to use ‘I Wanna Be Somebody’ by W.A.S.P, but got a refusal from Blackie Lawless on the grounds that the story of the film, or the events depicted, didn’t adhere to his current religious believes–which I thought was quite funny. So I went with my other choice and it fits perfectly to the story.”

4. Riot’s “Run for Your Life”
“From ‘Restless Breed,’ which is one of my all-time favorite metal albums. Riot were the U.S. equivalent to the NWOBHM, a kick ass band that doesn’t fully get the respect they deserve. The scene where Hera frees the hoard of sheep in the slaughterhouse needed a fast galloping song, and the choice was between this one and ‘Run To The Hills’ by Iron Maiden.”

5. Megadeth’s “Symphony of Destruction”
“From ‘Countdown to Extinction.’ I wanted a song that represented the year the film ends on, 1992 to be exact. I also wanted a song by one of the original thrash bands and that specific song was perfect for the final scene of the film. It has a great riff and hook that plays perfectly to the emotional release I was going for.”
Posted by Robert Kennedy at 12:09 AM