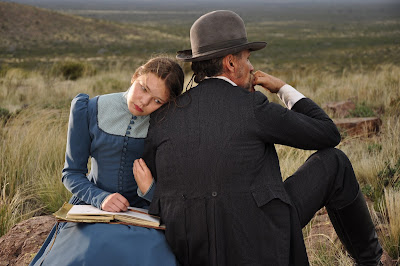 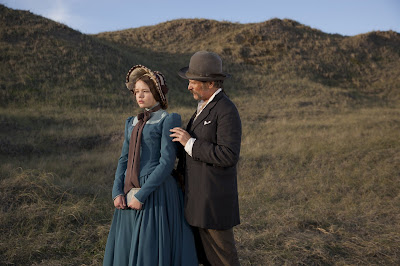 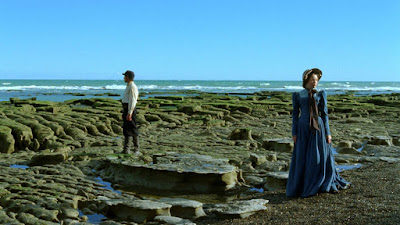 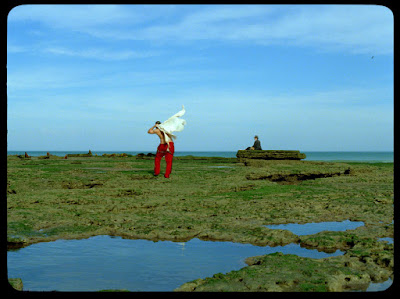 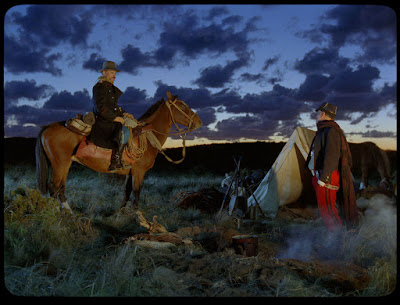 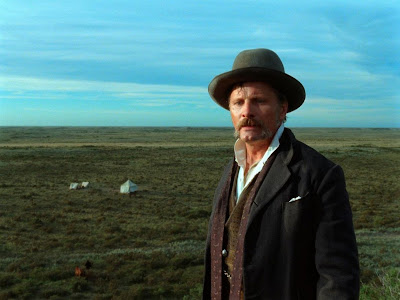 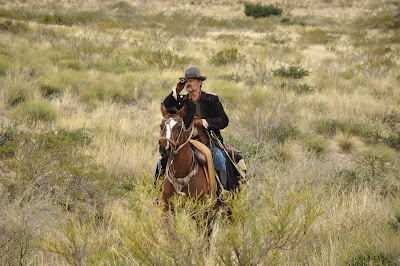 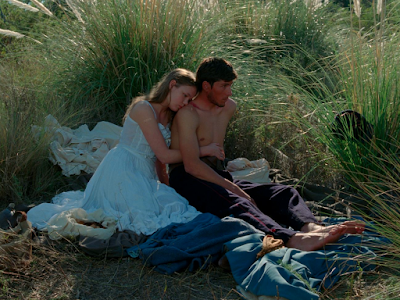 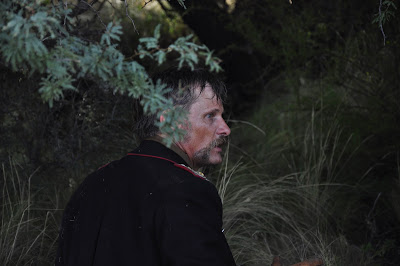 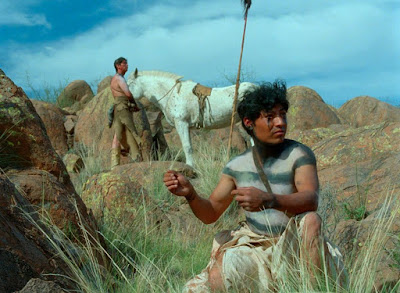 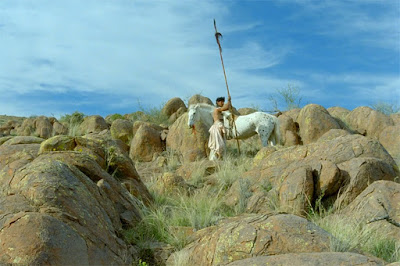 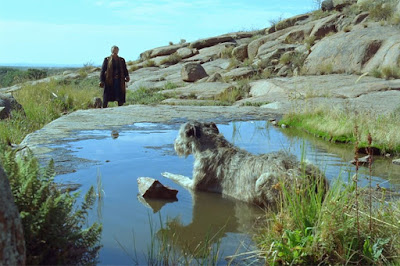 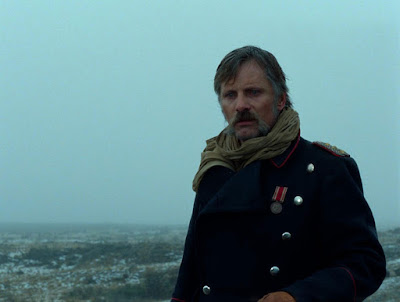 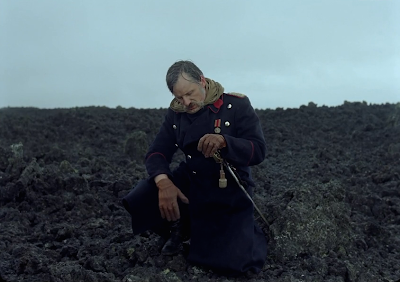 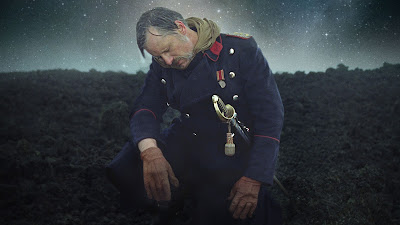 
My films aren’t narratives. I observe people, different moments, and I put them all together in the film. The audience has to imagine or create something sitting in the chair.
—Lisandro Alonso, from Michael Guillen interview, August 28, 2009, Twitch: director interview


This may be the most accessible of all of Alonso’s films, most of which are imbued with a plotless, dreamlike quality that resembles more of an atmospheric state of mind than a coherent storyline.  Every one of his films pits solitary men in extremely barren and isolated circumstances in search of some largely unknowable destiny, using little to no dialogue, where the harshness of the desolate landscape offers a commentary on the difficult and often deteriorating psychological state of mind.  While all his films include lengthy, uninterrupted wordless sequences bordering on the abstract, this one does as well, while also offering a bit more clearly defined dialogue and an actual historical backdrop, including a recognizable narrative and more clues than usual that at least initially offer a map to begin with before the journey takes us into unchartered territory, leading us into mysteriously inexplicable destinations that remain elusive and ambiguous, leaving each individual viewer something of a Rorschach test to make sense out of.  One thing’s for sure – a significant amount of time passes which does seem to alter the landscape considerably, where there is a final coda, much like there is in Pocahontas’s abrupt visit to the ornate civilization of British royalty in Malick’s The New World (2005), that in this film jumps ahead more than 100 years, offering an unusual perspective to say the least.  Like Malick, the film begins in a specific moment in history, and while never named, it is likely the 1870’s and early 1880’s campaign by Chile and Argentina to wipe out the indigenous populations in Patagonia, and what might be read as an allegory about colonialism soon takes a circuitous path through mythology into an unrecognizable dreamscape, with touches of the supernatural found along the way.  No historical background of this purge is provided, though in a time of Chilean expansion into Patagonia, historian Ward Churchill has claimed that the indigenous Mapuche population dropped from a total of half a million to 25,000 within a generation as a result of the notoriously brutal military assault on the Kingdom of Araucania and Patagonia that led to their subjugation.  Coinciding with the Chilean intrusion, Argentina General Julio Argentino Roca (who was eventually named their President) was instructed to settle the frontier problem of Patagonia, which he did by directing a military campaign known as the Conquest of the Desert, which established Argentine dominance in the region and effectively ended the possibility of Chilean expansion while also killing and displacing tens of thousands of Indians from their traditional lands.  Once rid of Indians, ethnic European settlers eventually developed the lands for agriculture, turning Argentina into an agricultural superpower in the early 20th century.  This is a particularly contentious period of Argentinean history, where the Conquest is commemorated on the 100 peso bill in Argentina, which some historians have claimed brought Civilization to an otherwise wild frontier, opening the lands to European farmers, while others have claimed it was little more than genocide.


Alonso has always used nonprofessional actors and written his own material, though here he collaborates with a professional writer, Argentine poet and novelist Fabián Casas, while working with an internationally recognized star in Viggo Mortensen, who also contributes the music, as well as longtime Aki Kaurismäki cameraman Timo Salminen, who certainly elevates the look and production values of the film, where much of it, with the boxed frame and rounded corners, is meant to resemble old photographs.  Coming six years after his previous feature Liverpool (2008) that remains arguably his best work, and the first to feature such extensive interior psychology, as does this follow up work, the film opens with inner titles making reference to Jauja, an ancient Incan settlement founded by the Spanish conquistadors that subsequently became Peru’s capital city, suggestive of a land of plenty, or El Dorado, a mythical utopian paradise that drew many on an endless quest for its discovery, but eventually driving them to ruin.  This “big lie” was invented to get Europeans on board the ships in quest of adventure, where the inhospitable lands that greeted them were endlessly desolate and empty, a sparsely populated region at the southern tip of South America consisting of deserts, steppes, and grasslands where only indigenous Indians roamed wild.  Nonetheless, the lure of hidden riches suggests Werner Herzog’s AGUIRRE, THE WRATH OF GOD (1972) and the ruthless Spanish expeditions in search of lost cities filled with wealth and gold.  This brief outline guides us to a journey into a distant new world, where Danish captain Gunnar Dinesen (Viggo Mortensen) and his fifteen year-old daughter Ingeborg (Viilbjørk Mallin Agger) are stationed with the Argentine army at a remote coastal outpost in Patagonia teeming with giant seals sunning themselves on the rocks, their purpose only vaguely hinted at, as Dinesen is a military engineer, with dozens of soldiers dispatched to dig trenches in the hot sun under his orders, presumably hired to build up the army’s defenses for the Conquest.  The film is uniquely set in two distinct places and time periods, linking the past to the present, where the lengthy opening sequence may all be a dream by Ingeborg, a young girl living in a Danish castle in the present, imagining herself connected to Dinesen in some mysterious way.  Dressed in the finest European fashion, she is of an age to be leered at by the crude and lecherous army officers, whose racist regard for Indians is equally troubling, causing her father some concern, but rather than allow them to indulge their pleasures, she decides instead to run off into the wilderness with a handsome young soldier (Misael Saavedra), where the outlying landscape becomes some idyllic natural paradise.  Dinesen quickly chases after her, where the marshy grasslands turn into a desolate rocky terrain, as the everpresent sounds of birds disappear altogether, leaving him alone in a solitary existence where the changing topography only grows more empty and barren, where he may as well be on the surface of the moon.


Through a long and treacherous journey, much of which resembles the years-long search of Ethan Edwards in THE SEARCHERS (1956), Dinesen loses all traces of his former self, where the very things that define him, his map, his discipline, his hat, his firearm, and even his horse, are lost along the way, where he’s forced to continue his seemingly endless journey on foot, step by step, where the man is literally consumed by the enveloping landscape of emptiness that stretches to infinity in all directions.  With its similarly congested box shape and equally futile search through the expanse of the arid desert, though in search of water, the film parallels Kelly Reichardt’s Meek's Cutoff (2010), as both reveal the aimless wanderings across a desolate frontier, leading to a deteriorating state of mind as they run short of faith and water.  In one extraordinary sequence, Dinesen rides off into the desert singing what is perhaps an army song, where the accompanying piano and guitar composition was written by the man seen drifting offscreen, where only the sound of his voice remains, as if the reality of his existence has literally disappeared, crossing into mythological territory.  Action as we know it has ceased to exist, replaced by signs of a treacherous journey, riding horses, climbing mountains, or crawling through challenging landscapes.  By then the pace of the film has slowed to a crawl, yet he persists, where it becomes apparent that what he’s pursuing exists only in dreams, long ago having lost any contact with reality.  Like Antonioni’s Zabriskie Point (1970), Hellman’s Two-Lane Blacktop (1971), and Jarmusch’s Dead Man (1995), these are films that make extraordinary use of natural landscapes, where man’s quest across the wilderness gradually loses steam, where the context is altered over time, where the original reality vanishes into thin air while something new emerges, driven by a spiritual realm that is expressed in near hallucinogenic, dreamlike imagery.  His strength depleted from lack of food and water, Dinesen follows a stray dog in an interesting parallel to one of the last thoughts his daughter spoke, speaking of her desire to own a dog, one that would follow her everywhere.  Little could he suspect, that’s exactly what Dinesen becomes late into the film, blindly following every last trace of her, where the dog leads him into a mountain cave where he encounters an elderly witch (Ghita Nørby), whose pronouncements defy logic, making little sense initially, much like the witches riddle from Macbeth, but the moment resonates simply due to her mere presence, evoking unknowable mythological destinies.  “What is it that makes a life function and move forward?”  Like Alice down the rabbit hole, where it all leads is a spiral into an inexplicably mysterious abyss, coming out on the other side where a completely new world exists in another time dimension, strangely connected to the original one, but curiously different.  In this case the end of the journey is back at the beginning, where it takes an exceptional determination and a willful plunge into the unknown to retrace those steps to board those same ships for another journey in search of El Dorado, where European prosperity is linked to this colonialist era of plundering the resources from distant nations.
Posted by Robert Kennedy at 12:16 AM