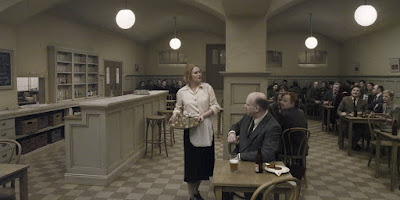 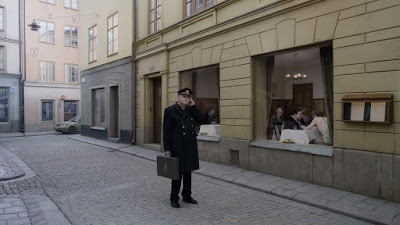 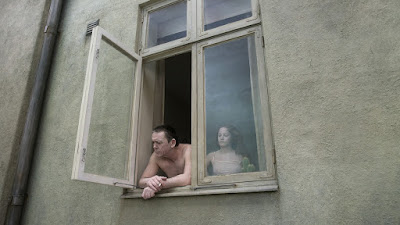 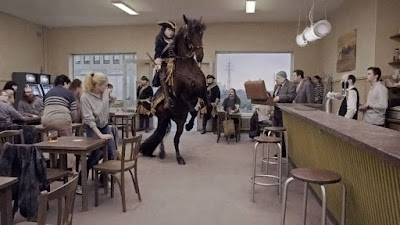 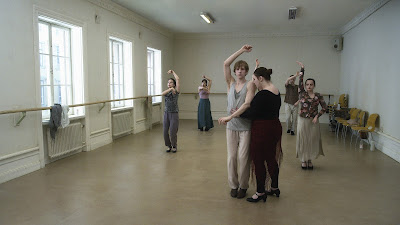 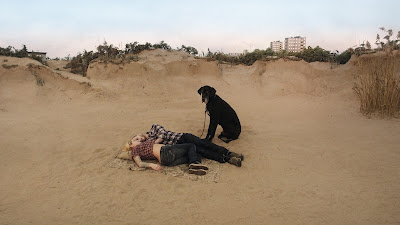 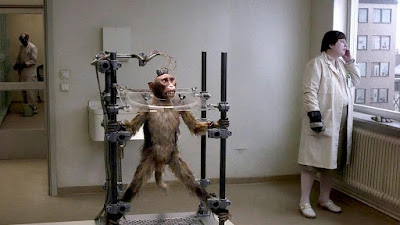 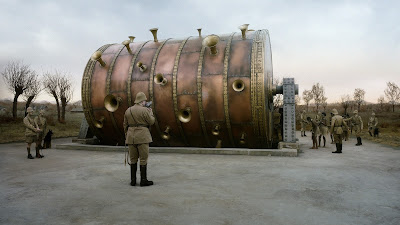 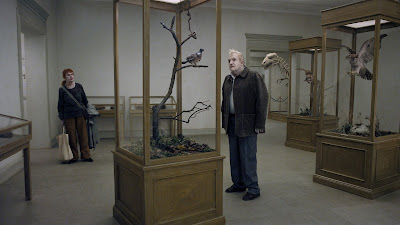 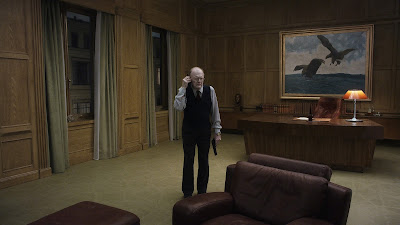 The final installment of Roy Andersson’s “trilogy about being a human being,” coming after SONGS FROM THE SECOND FLOOR (2000) and YOU, THE LIVING (2007), turning this into a nearly two decade long experimental view of human existence, as seen with a modernist sensibility accentuating the absurdity of human behavior.  Perhaps only ERASERHEAD (1977) displays this level of surrealistic artistic sensibility, where what’s showing up onscreen could only come out of the heads of such completely original artists, where no one else displays their level of assuredness.  While SONGS created the most explosive impact, literally something we had never seen before, each successive venture has been singularly unique artistically, but less effective overall, as we are treading on familiar territory.  Not sure Andersson had a trilogy in mind when he began this project, but his initial success came from making such successful, award-winning commercials, directing over 400 of them, which is how he’s financed his features, though in 1975, he took a 25-year break from directing feature films.  When SONGS was released, the film world sat up and noticed, as it seemed to come out of nowhere, like a long absent comet that suddenly blazes across the sky.  With meticulously designed sets, Andersson took seven years to complete his next film to his exact specifications, and another seven more to finalize the trilogy, where Andersson’s style, according to a 2009 MOMA exhibit of his work, MoMA | Filmmaker in Focus: Roy Andersson, is “stationary shots characterized by brilliantly conceived tableaux, yet an essential humanity and focus on the daily lives of working-class people.”  Without ever utilizing lead characters, his primary focus is establishing a precise look with washed out color, creating a ghoulish and often unworldly mood, using deadpan humor, exaggerated, heavily stylized acting that lampoons Swedish culture, which includes a fondness for fat people, the elderly, and people so skeletal that there is barely any flesh on their bones, their faces painted chalky white to resemble walking corpses.  Filmed in long shots where the camera never moves, Andersson’s sketches are like paintings that come to life, offering bleak social criticism through a heightened tone of overly morose absurdity and a lacerating surrealism.  Much like ERASERHEAD’s signature song from the radiator, “In heaven, everything is fine,” the standard mantra heard throughout the final chapter are recurring cellphone phone conversations, “I’m happy to hear you’re doing fine.”  Judging from what we see onscreen, however, the world is a turbulent place with a prevalence of misery and death always hovering nearby.  Much like the short stories of Chekhov, conventional action has been replaced by a theater of mood and atmosphere, where instrinsic to the satirical tone established in each sequence is a fully realized, more profound underlying drama of realism.

The first Andersson feature to be filmed in digital, much of what transpires takes place in Gothenburg, opening with a series of cleverly ironic death scenes that display exaggerated morbid humor, where a man on a cruise ship remains dead on the floor immediately after ordering a sandwich and a beer, with ship officials hovering over him, and while his inert body remains the focus of the frame, the waitress is forced to ask the surrounding diners if any would care for a free meal.  One elderly customer expresses an interest in the beer, nearly stepping over the body to retrieve it.  Accentuating the ridiculousness of the human condition, we are introduced to a hapless pair of traveling salesmen, Jonathan (Holger Andersson) and Sam (Nils Westblom), two dour and humorless men who have come to collect their share of the earnings from the sale of their products in a small shop, discussing the inventory of specific novelty items, like rubber masks or plastic vampire teeth, with the saleswoman behind the counter.  But when they ask for money, she steps behind the door to ask her unseen husband what to do, telling them to come back in a few days, a tactic they refuse, as they’ve sent them repeated notices and it’s now time to pay up.  When it becomes evident they mean business, the door finally opens a sliver and we catch a glimpse of the man in the back still dressed in his robe, lying on the sofa, as if watching TV, where we hear his screaming cries yelling at the top of his lungs, “We have no money!” as the men are seen repossessing what few items remain in the shop.  It’s hard to decide where to place one’s sympathies, as each side is equally pathetic, but it does illustrate how close to the edge many people exist.  Andersson borrows the music from the end of Buñuel’s VIRIDIANA (1961), a barebones Rockabilly rock ‘n’ roll song called “Shimmy Doll,” Ashley Beaumont - Shimmy Doll - YouTube (2:00), where customers in a contemporary bar are playing it on the jukebox, when two soldiers dressed in 17th century army uniforms open the bar doors and stand guard, announcing the arrival of Swedish King Charles XII (Viktor Gyllenberg), a particularly militaristic figure known for his bloodthirsty aggression who reigned from 1697 to 1718, entering on his horse, ordering all the women out of the bar, attacking them with whips, having his men assault another man who he identifies as “a sneaky Russian,” chasing him down the street, whipping him all the way, expressing the pent-up furor and rage of men marching off to war to invade Russia.  Later on we see the remains of a ragtag group of walking wounded, tattered and beaten, retreating from battle, where the exact same circumstance plays out with the men standing guard at the door before the announcement of the King, whose horse is pulled into the bar with the King lying over the saddle.  His men pull him off into a chair, as it’s announced he needs to use the toilet.  One of his men checks the security of the facilities, only to return with the humiliating announcement that the King will have to wait, as the toilet is currently occupied.  Somehow all the previous fire and brimstone is gone, as instead the King must languish in his own private torment.

The title was inspired by the 16th century painting The Hunters in the Snow by Pieter Bruegel the Elder, a rural wintertime scene where the birds perched in the branches of the tree in the foreground have a panoramic view overlooking all, where Andersson imagines what they might be thinking about the actions and strange mannerisms of humans.  Winner of the Golden Lion for Best Film at Venice, where the competition included Birdman or (The Unexpected Virtue of Ignorance), Black Souls (Anime Nere), and Manglehorn, where it’s easy to see how Andersson’s cryptic vision could stand out.  Two scenes are perhaps most significant, one is a euphoric musical centerpiece sequence in a beer hall known as Limping Lotta’s in Gothenburg, where the bar hostess yells in the ear of an elderly customer asking if he’d like another drink, which of course he does, once awakened to the reality, where she announces he’s been drinking every night in the same establishment for 60 years.  “That’s a lot of shots,” someone suggests.  The scene suddenly shifts to the same man sitting in the same bar in 1943, where Lotta and her entire customer base break out into song, A Pigeon Sat on a Branch Reflecting on Existence clip - Limping Lotta YouTube (2:58), creating a delightful piece of living musical theater that continually builds in intensity, becoming a ravishing Brechtian spectacle of proper beer hall decorum, where everyone can get a shot of liquor in exchange for a kiss.  This is as intensely exciting as the film becomes, drawing the audience into the social implications of a small moment in history.  The other has darker and much more tragic implications, which is immediately evident to viewers, as the sweeping historical context stands out in a film that otherwise contains small comically absurd vignettes, so there’s a growing awareness as this sequence proceeds.  Black slaves tied together by ropes and chains are herded by Colonial-era British soldiers into a giant cylinder drum made by Boliden (a Swedish mining company sued and determined responsible for toxic poisoning in Chile in the 1980’s from tons of melted copper residue left behind on waste dumps where children routinely played) with what appears to be musical airholes.  Once locked in, the cylinder turns over a burning fire, like a rotisserie, as the slaves are literally roasted alive, yet break out into song, where screams are mysteriously transformed into a kind of mournful music, where an upper class establishment nearby of elderly rich dressed in formal evening wear opens the doors leading to a terrace view to observe the evening’s sinister entertainment as a hostess fills their glasses with champagne.  It’s a diabolical metaphor for the horrors inflicted by European colonialism where the viewers literally can’t believe their eyes.  Overall, each of the 39 filmed vignettes is elegantly defined by the easily understood simplicity on display, where there is little to no action, but the power of suggestion from each sequence builds up over time, creating a kind of skewed and imbalanced universe where humans are known to roam.  While dramatically inert, much of this is compacted into cleverly designed tiny packages that are visually inspired and simply unforgettable.
Posted by Robert Kennedy at 12:01 AM