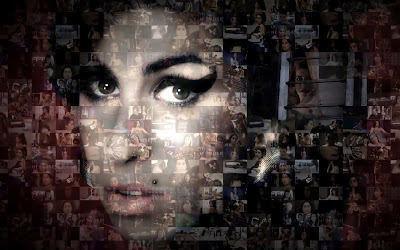 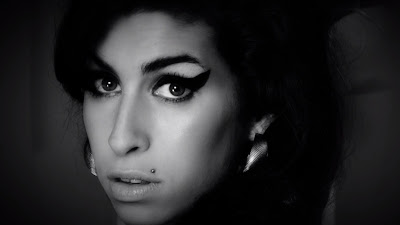 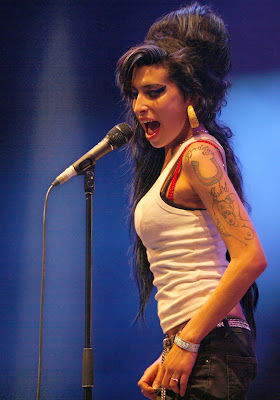 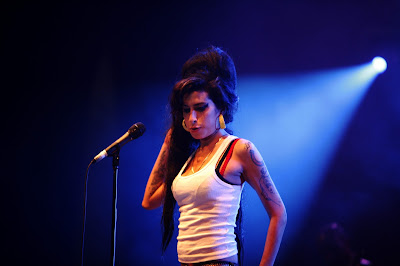 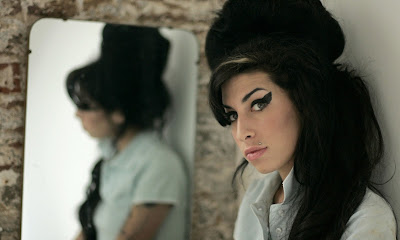 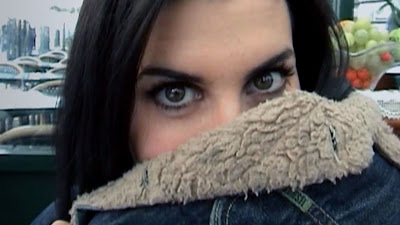 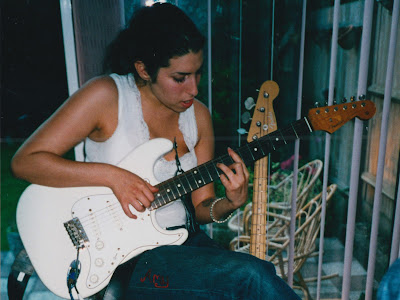 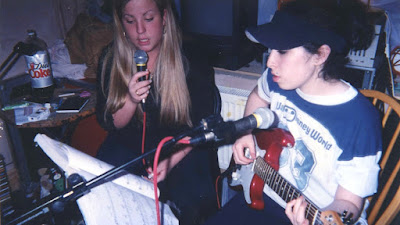 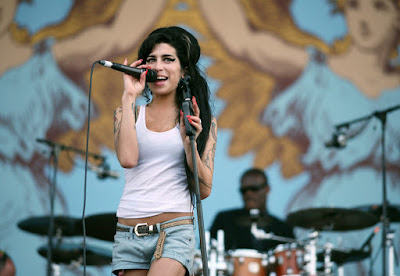 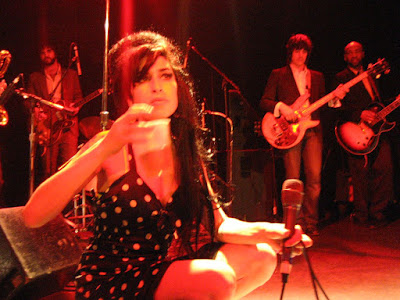 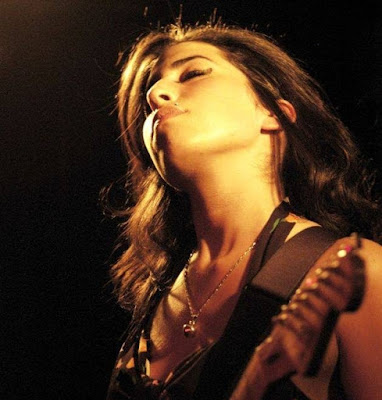 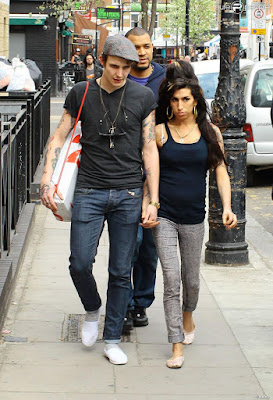 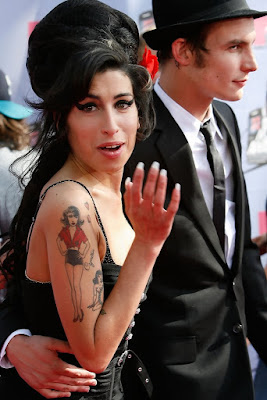 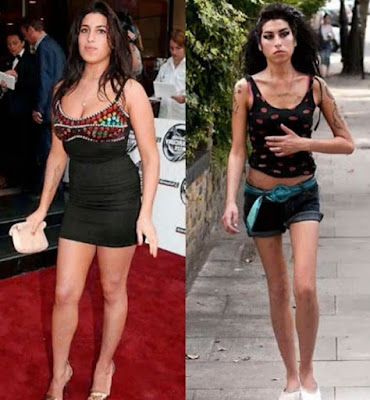 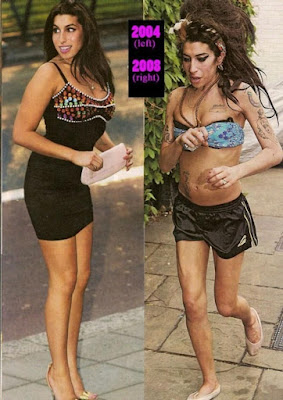 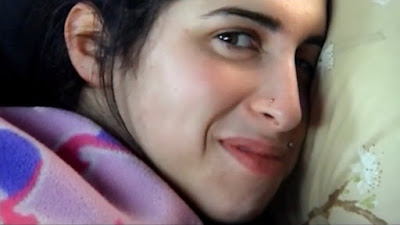 The opening half of this film is as good as anything you’ll see all year, where in the opening thirty seconds, the instant you hear Winehouse’s voice, viewing footage at age 14 at a birthday party for one of her friends, singing “Happy Birthday” followed by such a wrenching version of “Moon River” of all things that you’re already on the verge of tears, becoming a truly inspirational glimpse into what a unique talent and personality she was, possessed with a mature and fully developed voice while still a teenager, with vocal interests ranging from Sarah Vaughn to Ella Fitzgerald, where her jazz stylization at such a young age made her a singular, stand-alone artist in an sea of overproduction and mass commercialization.  Her raw talent is immediately recognizable from the moment you listen to her, where the earliest recordings tend to be jaw-dropping.  The early years of getting discovered, finding a manager, and recording her first album feels like an extremely proud and joyful journey, where everyone can just feel she’s ready to claim instant recognition.  It’s in the second half that the director undergoes his own meltdown, however, losing sight of what was so valuable and extraordinary in the opening, as it wasn’t more meticulous detail about her death that was needed, or sad images of an artist’s meltdown just before she died, where it becomes, literally, an obsession with her trajectory towards death, which feels exploitive and unseemly, literally dragging her through the mud, especially since that kind of graphic exposure is so unnecessary, having already been plastered all over the tabloid press.  Why on earth would we need to see that again?  Nonetheless, despite accentuating her demise well beyond the point of discovering anything new, it’s her early career that should generate a real interest in her work.  Believe it or not, this film will introduce an entirely new audience to her music, where much of this is like discovering it for the very first time.  Easily the most pathetic point in the film is having her drug addiction used as fodder for late night talk show jokes, where the crassness of the cruel humor actually shelters people from understanding the real tragedy of the experience, which this film does bring to life.  Dying of alcohol poisoning at the age of 27, her early demise was expected, perhaps even inevitable, as her name was so associated with explosive tabloid headlines that seemed to feed off of every tragic downturn in her life that the public became numbed by the overexposure.  Even many young people distanced themselves from her, choosing not to follow her music or career, as if that was tainted by another death trip, forever associated with the likes of Janis Joplin, Jimi Hendrix, Jim Morrison, Brian Jones, and Kurt Cobain, all dying at the age of 27.  Actually her death felt very much like the death of Princess Diana, as if both were hounded to death by the Paparazzi.

Director Asif Kapadia, following a familiar pattern of his highly successful earlier documentary SENNA (2010), which brought recorded footage of Formula One race car driving to life while following the thrills and spills in the racing career of Brazilian champion Ayrton Senna, is seen using home movies, behind the scenes videos, TV appearances, and phone footage, along with interviews from several key people behind the scenes in attempting to develop a more complete portrait of the artist as a young woman, becoming quite successful at humanizing Winehouse, whose career has otherwise been described as a train wreck.  In fact, the prime achievement of the film is to show just how brilliant an artist she was, which shows all the negative publicity and late career Paparazzi obsession in a different light.  Using archival footage from family, friends, and record companies, the film is literally an impressionistic mosaic of her life, rarely seeing who’s behind the voices heard throughout the film, instead focusing on Amy herself, a tactic that allows the audience to develop their own opinion of what they see onscreen, where through the years her hairstyle, her body, her clothes, and even her face is literally transformed before our eyes.  Winehouse is seen as a unique soul who never really wanted to be famous, thinking it would be awful and that she might “go mad” if it ever happened, realizing that the music she loved was not “on that scale” and was instead much more personal and intimate.  Growing up in North London listening to jazz singers, she developed a powerful voice while also offering raw and expressive lyrics describing her life, which are literally windows into her soul.  The film allows us to see the sheer force of her personality, that is often girlish, silly and funny, but also ferocious.   According to Kapadia, “She’s such a natural artist.  She picks up a guitar, goes up on the stage, sings and blows you away.”  Her songs are like diary entries, as they describe her problems with addiction, her relationships, and the choices that she made and the people around her made as well, where she loses control over her life at the end and literally becomes this forced public exhibit that is pranced out in front of the public and expected to perform on command, like one of those organ grinder monkeys.  While the intimacy of so many of the personal snapshots draw us closer into her life, becoming a global mega-star left her vulnerable to the constant glare of cameras, where the vulture-like, feeding frenzy treatment received at the hands of the Paparazzi reveal appalling images that when seen today only disgust us.  Because she’s always performing in front of a camera, the viewpoint of constantly watching her face staring back at us suggests we in the audience are complicit in what happened to her, showing an unhealthy appetite for misery and self-destruction, as someone is downloading and watching in mass those YouTube videos of her horrible performances, or buying those grotesque tabloids, so when she’s trotted out in public like a puppet on a string, she’s only doing what we expect and demand of her as a popular mega-artist.

One of the major pieces of contention in the film is the poisonous atmosphere that going on the road plays with mentally fragile or unhealthy performers, where they can keep it together in the controlled studio environment to make a record, but when they have to play to sold-out stadiums promoting their work for extended periods of time, the temptation for drug and alcohol use is simply too great for some with addiction problems to overcome, becoming their ultimate downfall, sending them into toxic tailspins they can’t recover from, especially when those around them keep sending them out on the road as they are relying upon that steady flow of cash coming in.  It’s heartbreaking that people don’t think to save a life first and foremost, but in Winehouse’s case, everyone, including the artist herself, was in a state of denial about the seriousness of her health problems, especially since drugs played such a major part of her life.  Because the audience is so familiar with the outcome, it plays out a bit like Gus van Sant’s ELEPHANT (2003), a heartbreaking recreation of a Columbine High School massacre, where in each, the audience looks for key indicators of what might have been done differently to create a different outcome.  Obviously what makes these films so tragically sad, bordering on horror, is watching them play out with no one recognizing any of the signs or showing the least bit of concern, even as so many cries for help were left along the way.  Her family, who are part of her inner circle, has denounced the film as misleading, disassociating themselves from it and stopped all contact with the director.  While the film does show the hangers-on and the murky and often disturbing conditions surrounding her, where those closest to her might have actually had a hand in driving her over the edge, especially the decisions (“My daddy thinks I’m fine”) made by her money-grubbing father, overall there’s enough blame to go around, but the film’s real intentions are to regain a bit of her humanity and illuminate what’s so remarkable about this extraordinary artist.  Some of the most remarkable early footage comes from her friends, Juliette Ashby and Lauren Gilbert, as collectively they videotaped everything they did, offering a loose, freewheeling style that really energizes the film.  At only 16, she finds a young manager in Nick Shymansky, who’s only 19, so her early rise is more like a couple of kids having a fun night out.  Perhaps all along, she modeled herself after and considered herself a jazz singer, yet she was marketed and eventually treated by the Paparazzi as a pop star.  The truth is jazz is a smaller marker niche, where playing to jazz festivals and small clubs doesn’t draw the same crowds or generate cultural interest at Grammy Awards, where the potential income is severely diminished.  The tried and true formula for success has always been to go for the money and fame, because with financial security comes the ability to make better choices in the long run.  When Winehouse sings a duet with one of her idols, Tony Bennett, she’s almost embarrassed at not holding her own, where her voice at that stage in her life is already failing.  Speaking afterwards, Bennett reminds us that no jazz artist likes to perform in front of fifty thousand people, before offering the final sobering thoughts that we can’t help but share, “Life teaches you how to live it…if you live long enough.”
Posted by Robert Kennedy at 12:02 AM