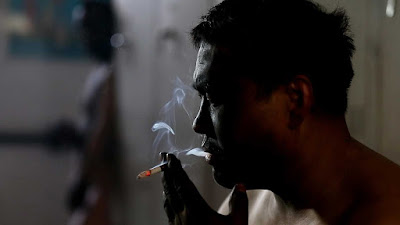 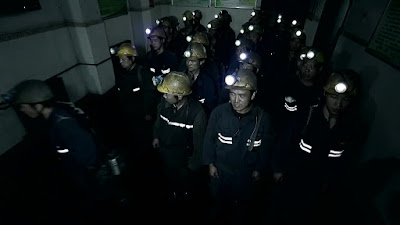 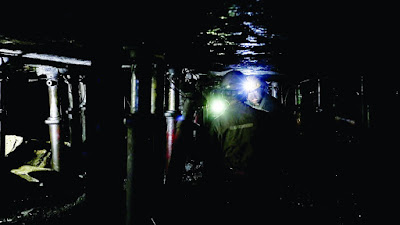 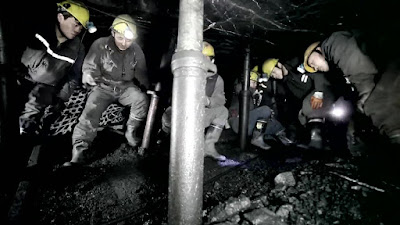 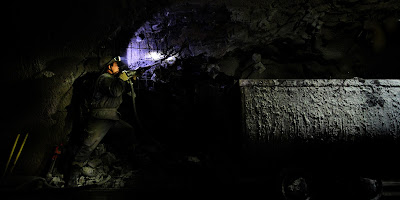 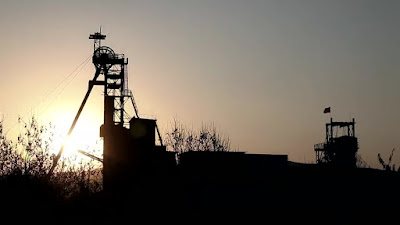 IN THE UNDERGROUND (Di Ceng Shen Chu)                B
China  (91 mi)  2015  d:  Song Zhantao
An intimate documentary exploration of the hazards of underground mining in the city of Sunzhuang in China’s Hebei province, where the filmmaker takes the viewers plummeting into the depths of the mine, holding the camera on the light at the tiny opening at the top, watching it get farther and farther away until it feels infinitesimal.  It’s to the director’s credit that he made that journey alongside the miners every day, developing a relationship where he is seen as just part of the landscape, both above and below ground.  Without seeing it with your own eyes, many viewers would never realize just how dangerous this kind of work can be, where they’re literally risking their lives on a daily basis, where much of what they’re asked to do just sounds impossible.  It’s among the most dangerous jobs anywhere in the world, with accidents occurring across all continents, not to mention lung disease, where it seems no coal company invests enough money into developing safe working conditions, but these mines in China are among the most primitive working conditions imaginable.   It’s important to realize that China produces nearly half the world’s coal production, where 70% of China’s total energy comes from coal mines.  According to a June 5, 2015 article from The Guardian, The coal boom choking China | Environment | The Guardian, planners favored it because it was cheap, plentiful within China’s borders, and easy to transport, but unfortunately it’s also dirty and a threat to national security.  Air pollution in China, mostly from factories and power stations, is so bad that it kills more than half a million people a year.  Perhaps more worrisome is the threat coal poses to China’s already scarce water supply.  While this film doesn’t delve into this area, the concern over the miner’s working conditions is what motivated this director to make the film.  Safety regulations are learned by heart and recited out loud in unison every morning before they head onto the elevators that take them underground.  We also see miners above ground talk about the need to help each other and not leave an extra burden of work on a few individuals, reminding themselves that cooperation is key.  But this doesn’t prevent the extreme dangers and accidents inherent with the job.

According to the Beijing print edition of The Economist, July 18, 2015, Mining safety: Shaft of light - The Economist

For decades China’s coal mines served as tragic showcases of greed, corruption and contempt for life: thousands died in accidents every year and many more after prolonged agony from dust-clogged lungs. In 2003 Wen Jiabao, who was then about to become prime minister, went down a shaft to have dumplings with miners. He told local officials that safety was the Communist Party’s priority. Over the next three years, however, just as many coalworkers died in mines—more than 18,000, by official counts—as in the preceding three years. Mr Wen’s words rang hollow.

Then a striking turnaround began. Chinese coal mines became far safer even as they more than doubled output to fuel the country’s economic boom—they produced 3.9 billion tonnes in 2014, about half the world total. Last year 931 miners were killed in coal-mine accidents. It was the 12th year in a row in which the death toll reportedly fell. By one measure of mining safety—deaths per million tonnes of coal produced—China’s record had improved twenty-fold since 2002, to 0.24. That is still about ten times worse than in the developed world. Officials say safety conditions remain “grim”. But the coal industry is also labour-intensive. China has 5.8m miners; America, the world’s second-largest producer, has only 80,000. Measured by deaths per 100,000 coalminers, China’s annual rate of 16 compares favourably with a total of 20 deaths in America in 2013.

The conditions in the mine are horrifying, where small caverns are dug out where they can barely stand, surrounded by the constant presence of steel supports preventing the top from caving in, where there are recurring incidents of falling debris happening all the time, as these miners are using jackhammers to extract the coal from the walls, along with pick axes and shovels, where it collects on a nearby conveyor belt that hauls the extracted coal out in carts. In a lengthy sequence shown, there are severe water leaks, where it is literally raining inside the mine shafts, forcing the miners to constantly make adjustments to their support system, which they can only do by removing the existing supports, placing their lives in even greater danger.  One harrowing operation results in a man’s death from a grisly accident, mourned afterwards by his fellow workers, seen collecting money for his inconsolable surviving wife and children. The collective of women is interesting, as they form a kind of self-help group due to the stress of the job, often seen praying for the safety of the men.  According to the filmmaker, mining companies often place a church or temple near the opening of the mine for this explicit purpose.  Relationships are tested from the extreme duress families are under, where a tense argument between a husband and wife develops over the husband’s neglect to mention a tiny bonus, where the wife has been scraping by just to feed the family, where every little but helps.  The men spend so much time underground, the women spend the majority of the time fearing for their lives, where they can also be seen in tearful testimony before a group of mining executives asking for suggestions to improve methods.  There is a balance between what’s depicted above and below, where distinct faces and personalities reveal themselves above ground, though the immediacy of the men’s work underground is simply unparalleled, where daily activities are usually accompanied by a chorus of voices shouting instructions before they begin work.  We also catch a glimpse of naked men in the shower and changing room afterwards, seen washing the black soot off their faces and out of their hair, while a voice over the loudspeaker can continually be heard making pronouncements, like being shouted at, which seems like a strange way for the men to relax after coming out of the ground.


Often lit only by the light on the miner’s helmet, viewers are immersed into the darkness, where because of the colorless underground world, the director also chooses the bleach out the color above ground as well, creating a dreary reality with an inevitable sense of misery and fatalism, seen even during street celebrations, where we’re left with the feeling that there’s little to celebrate or feel enthusiastic about, as a prevailing emptiness continuously shrouds the scene.  The birth of a baby, presumably one of the happiest moments in the life of a family, occurs under such primitive and deplorable conditions that it feels downright grotesque, where one instantly wonders about the future of bringing another child into this life.  One of the more interesting scenes is watching a group of women submerge into the mine shaft, each dressed in miner’s clothes wearing helmets with a light attached, where initially the thought is they are working the mines as well, but their presence is to help raise the spirits of the men, bringing them welcome food, where the men can take a momentary break, though each man appears isolated and alone, lost in their own thoughts as they heartily munch on this unexpected surprise.  Another jolt to the senses is the use of dynamite, where explosives are used to place pressure in targeted spots.  The viewers can see how fragile the support system is, so coming after the miner’s death, the idea of initiating explosive blasts seems doomed from the outset, but its all part of their ordinary routine, producing a stunning pall of silence and smoke afterwards.  Perhaps most surprising are the company’s instructions to remove several hundred of the tunnel support beams one-by-one as the mine’s ceiling collapses around them.  This extraordinary operation offers the impression that the mining equipment is worth more than the men’s lives, as they steadfastly remove every one, which is a painstakingly slow process that requires nerves of steel to avoid fear, something that is never mentioned.  There is much repetition involved in carrying out their duties, where perhaps this might have been edited differently, but few films immerse the viewers directly into the heart of a mine like this one, which not only reveals the claustrophobic dangers inherent with this kind of subterranean work, but also attempts to provide a wider, sociological view of the physical and mental toll it places on the families, creating a powerful insider’s view at the collateral damage China’s industrialization has taken on its people.
Posted by Robert Kennedy at 12:01 AM