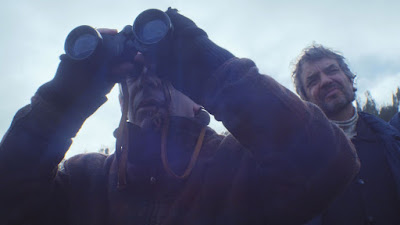 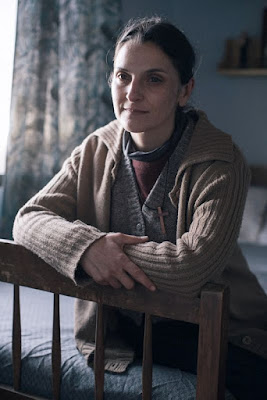 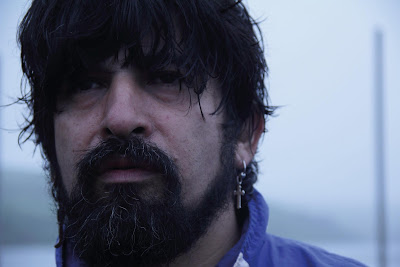 God said, “Let there be light,” and there was light.  God saw that the light was good, and he separated the light from the darkness.
—Genesis 1:4

In a similar manner as Lars von Trier, Larraín is a full-blown provocateur, whose goal is largely to stir up as much trouble as possible, which this feels designed to do, even if it borders on the ridiculous.  What’s missing in this allegory of a church tainted by scandals is the outrageous wit and humor of Luis Buñuel in films like VIRIDIANA (1961) and Simon of the Desert (Simón del Desierto) (1965), while Larraín’s attacks feel more mean spirited and self-motivated, as if he relishes the act of condemnation.  Born to an upper class family linked to the Pinochet dictatorship, where his father was a right wing politician, Larraín has veered to the left, intimately familiar with his country’s past crimes, but he falls well short of an arena that offers any solutions, where his films feel more like finger pointing than well thought out journalistic exposé’s.  Winner of the Grand Jury Prize (2nd Place) at Berlin, this film will not win the director any friends in his home country, which is over 70% Catholic, as the director’s goal in this film is to take aim at the Catholic Church in Chile, who’ve been there as an institution since the nation was originally formed, often included in the upper echelons of politics, including the reign of dictators, holding the conservative to hard right positions.  Not for the faint of heart, this is a deeply troubling film set in a small, somewhat dilapidated coastal town of La Boca in Chile that is known for attracting surfers.  To the sacred sounds of Arvo Pärt, the same music used so effectively in Tom Tykwer’s WINTER SLEEPERS (1997), the story concerns an unassuming yellow house, where concealed from the world (and to the viewers initially) is the fact it is owned and operated by the Catholic Church as a kind of repository for disgraced priests who have committed serious crimes, where they are expected to use this time to repent.  Unfortunately, none of the current residents spend any time reflecting on the past.  Instead we see images of them on the beach training a greyhound dog named Rayo, making him chase a simulated rabbit strung to a pole, racing him relentlessly, timing short bursts of speed, and even entering him into a race, where a small group of men stare through binoculars from a distant field overlooking a racetrack while a lone woman accompanies the dog to the racing chute.  When Rayo wins, they contemplate making bundles of money by taking him to Santiago, the nation’s capitol.

Meet Father Vidal (Alfredo Castro), a lifelong pedophile; Father Silva (Jaime Vadell), an army chaplin for 30 years that aided the military in torturing prisoners; Father Ortega (Alejandro Goic), whose solution for unwanted babies was to take them from the mothers that didn’t want them and redistribute them to those that did, otherwise known as baby trading; Father Ramírez (Alejandro Sieveking), who is too senile to remember his sins; and Sister Mónica (Antonia Zegers), the overseer who runs the house, who is not really a nun, but was accused of beating her adopted daughter.  This motley crew spends the majority of their lives tucked away from the world outside, as they’re not allowed to interact with the public.  While they really spend the majority of their days plotting and scheming, they are joined one day by another fallen priest, Father Lazcano (José Soza), who we quickly learn is another known pedophile, as no sooner does he arrive, but a homeless man on the street named Sandokan (Roberto Farías) begins shouting at Lazcano, describing in raw detail the filthy things that were done to him as a child by that priest, where his rant grows increasingly loud and disturbing, where the cowering priests don’t know what to do.  Handing Lazcano a pistol hidden away for self-defense, they encourage him to scare the rascal away, like a scurrying rat.  But instead, Lazcano shoots himself in front of Sandokan, taking his own life.  While an investigation from the police produces conflicting statements about the incident, everyone is cleared of any wrongdoing.  The Church, however, sends their own investigator, a morally righteous Father García (Marcelo Alonso) who intends to right a sinking ship, reminding these men why they’re there, as it’s not some country club running greyhounds, where the men have turned into lazy ingrates without an ounce of repentance.

Like the arrival of Clint Eastwood to clean up the place, Father García is one serious hombre, interrogating each of them Stalinist style as if he’s conducting his own Inquisition, already appraised of their crimes, demanding a full accounting before God of their actions.  As all of their crimes are revealed, each of them instead offers an excuse that minimizes guilt or personal responsibility, leaving the Father in a quandary about their continued self-deception, resorting to threats, taking away the greyhound, shutting down the facility, where he’d just as soon see them all behind bars.  This kind of talk will not win him any friends on the premises, as this band of brothers refuses to wilt under pressure, as they’re not yet ready to face their Judgment Day.  Wary of this new priest, “He wants to change the Church.  The Church is 2000 years old, I like it the way it is.”  They go through the motions of pretending to lead better lives, but who are they kidding?  They’re running a feast-laden racket with booze galore hidden away from the world, living on hush money from the Church, as they’re considered too dangerous to mix with society.  Meanwhile, Sandoken is still around, choosing a vacant location alongside the yellow house, shouting more vile content into their ears at all hours of the day and night, only this time he’s visited by Father García, who wants to hear what it’s all about.  Fearing for what might happen to them, the tiny collective must act quickly, plotting an insidious plan that resembles FRANKENSTEIN (1931), instigating an angry mob scene, lighting the fuse, steering them towards the homeless outcast, as he’s the one to blame for what these waywards priests have done behind their backs, covering up their own crimes by blaming the innocent.  The choice to use a metaphor for crimes this historically egregious doesn’t really work, as the full impact of the Church’s very real actions to send these wayward priests to surreptitious locations in Africa and South America isn’t really felt, as these “criminals” are still being hidden and protected by the Church and not handed over to police authorities.  So ultimately what’s changed?  Rather than assess the damage of actual crimes throughout history, Larraín resorts to a savagely black satire, showing the extent a corrupt Catholic Church will go to protect its own, inventing an inflammatory new mythology of the absurd while lambasting the moral hypocrisy of past sins.  Shot in a dreary, often out of focus style, this low budget look is an improvement over the grainy images of his previous work No (2011), but the depravity of the subject matter seems intentionally bathed in a kind of moral blur, as if suggesting the Church has not yet come to terms with this issue.
Posted by Robert Kennedy at 12:37 AM