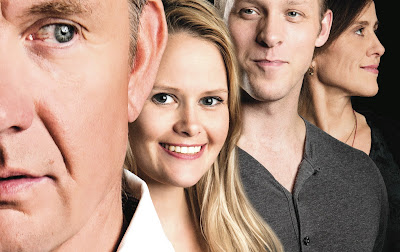 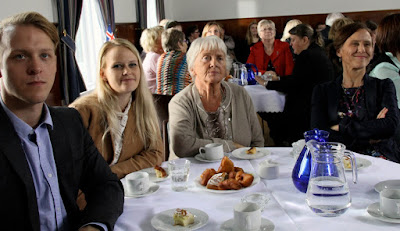 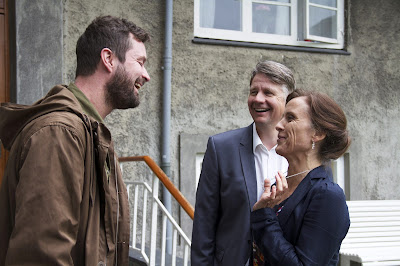 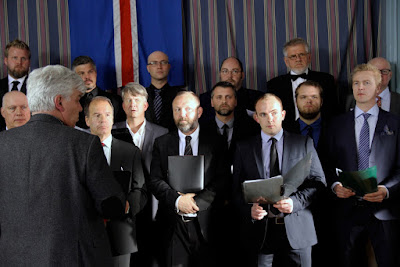 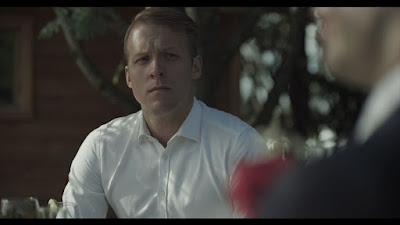 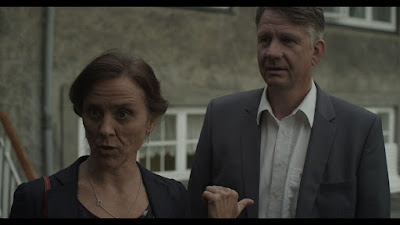 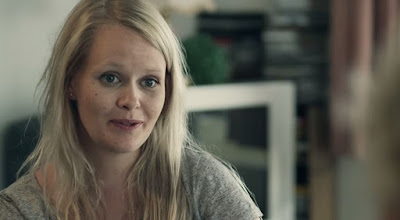 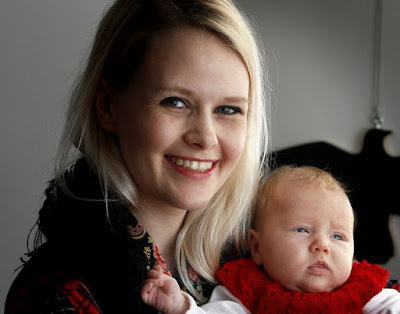 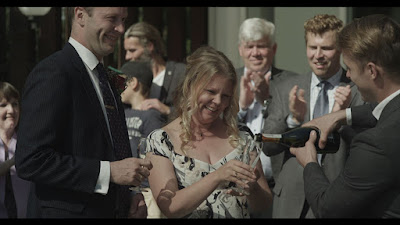 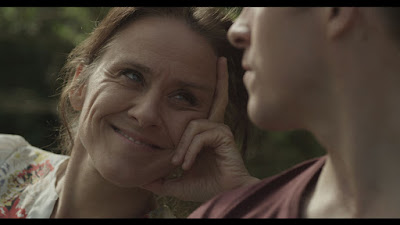 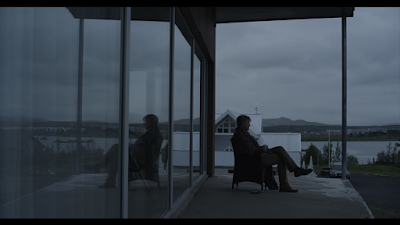 
Some people are insane.        —Dísa (Harpa Arnardóttir), opening line of the film


Another highly entertaining and terrific film from Iceland by a first-time actor, writer, and director Björn Hlynur Haraldsson, who is considered Iceland’s top actor, graduating from the Icelandic Drama Academy in 2001 while co-founding Vesturport, Iceland’s most innovative theater and film company, expanding his own first play Dubbeldusch to a feature-length film.  That being said, this is a complex, exceedingly well-written, near Shakespearian, Scandinavian dark comedy that defies expectations and will have audiences howling with delight in a Bergman-like story about hidden secrets and family relations that operates on multiple levels, exposing the boundaries of a seemingly successful marriage, showing the fragility of established trust, as often what you know and depend upon in a relationship is little more than an illusion, perhaps created with the best of intentions, but their exposure can be devastating.  Gunnar (Hilmar Jónsson) and his wife Dísa (Harpa Arnardóttir) are seen sipping their morning coffee while reading the Sunday papers in their luxurious, glass-windowed summer house in the countryside where mountains can be seen off in the distance, but they seem to have invented their own language to communicate with each other, beginning sentences without ever completing them, starting a thought without finishing it, where to them this all seems perfectly normal.  A sociologist in his mid-fifties, he’s written several successful self-help books that have allowed him a comfortable lifestyle, tinkering with the house on weekends, which is always a work in progress, while Dísa works as a nurse at a nearby hospital.  But even reading the gossip columns, it’s pretty clear that after 30-years of marriage, having been together since their teens, there’s plenty of distance between them.  On the spur of the moment, the couple is visited by their 25-year old son David (Hilmir Jensson), who is kind of a young Icelandic Ben Affleck (who can act!), and with him is his attractive new fiancée Sunna (Þórunn Arna Kristjánsdóttir) that he’s only just met in Denmark while backpacking through Europe, but she’s adorable and both are obviously madly in love.  This announcement comes as a huge surprise, as it’s the first time the family has heard about her, but Sunna is smart, polite, and ambitious, where she seems like the ideal girl to bring home to the parents.


But all is not sweetness and nice, as Sunna mentions the name of her mother, growing more uncomfortable mentioning she’s never known anything about her absent father, which makes Gunnar slink down in his chair as if he’s been hit with a haymaker, suddenly unable to speak, offering a forced smile of discomfort, but never utters a word afterwards.  Terrified and desperate, despite being a so-called expert in solving other people’s problems, he hasn’t a clue what to do next, unable to face his darkest secret, as he hasn’t the heart to tell his overwhelmingly elated son the truth, thinking he’d be crushed and would never forgive him.  The only person he speaks to is his brother Gestur (Sveinn Ólafur Gunnarsson) who has recently survived the fifth surgery of his head only to get news from his doctor that he needs another one, as there are still traces left of cancer.  Constantly fed a strange Icelandic mixture of Arctic thyme called blóðberg in Icelandic (the original title), his girlfriend Guðný (María Heba Þorkelsdóttir) swears it’s the only thing keeping him alive.  With time running out on his own life, Gestur advises Gunnar to do what is right before it’s too late, suggesting all may be forgiven if he tells the truth, but he has to give them that chance, explaining “There is nothing more difficult than asking for forgiveness.”  Of course, Gunnar can’t follow his brother’s advice and instead starts acting strangely and becomes headstrong “against” the marriage, becoming a constant irritant, trying to sabotage their relationship, hoping they’ll simply fall apart on their own.  But these two lovebirds have never been happier, and are literally ecstatic to announce Sunna is pregnant.  Gunnar is griefstruck and in sheer agony, unable to fathom the extent of the damage he has caused.  Dísa finds his outrageous behavior utterly reprehensible, claiming she doesn’t even recognize him anymore.


Caught up in this dilemma, where ugly traces of his long forgotten past are being pushed back to the surface, things are only going to get worse, and Gunnar simply can’t allow this to happen.  Just when you think you’ve got this film figured out, something else comes along and changes everything, as Gunnar will soon have to face the meeting with Sunna’s mother, Þórunn (Jóhanna Jónas), who just happens to be invited over for dinner to celebrate the announcement of the baby.  Literally tearing his hair out with fear, Gunnar is forced to face the inevitable, becoming one of the more agonizingly awkward dinner parties on record, where everything that can possibly go wrong does, leaving everyone aghast in silence until all hell breaks loose.  What separates this film from other dramatic powerhouses like Thomas Vinterberg’s THE CELEBRATION (1998) or Susan Bier’s AFTER THE WEDDING (2006) is the hellacious amount of humor involved, where according to the director, people from Iceland will think this is a comedy and be more influenced by the devious nature of the wickedly dark humor, while other parts of the world may be drawn purely to the tragic elements.  The beauty of the film is that it works both ways, as it’s a superbly written theater piece, casting the same two actors as the older couple that appeared in the original play.  The acting is extraordinary, completely in synch with the changing dynamic required and constant emotional upheaval, where this small, unheralded film coming from a tiny country of 300,000, producing 15 feature films in 2014, with only 40 screens nationwide (according to Icelandic Film Centre - European Film Promotion), turns out to be one of the better films seen all year.  To think that Ragnar Bragason’s Metalhead (Málmhaus) (2013) and Benedikt Erlingsson’s OF HORSES AND MEN (2013) were only released in the USA this year, along with the stunning success of Grímur Hákonarson’s RAMS (2015), which won the Un Certain Regard Award at Cannes this year, these films are a remarkable indication of the quality of films coming out of Iceland today.  Perhaps we should pack our bags and plan an immediate visit, as these cultural offerings are simply outstanding.
Posted by Robert Kennedy at 12:01 AM