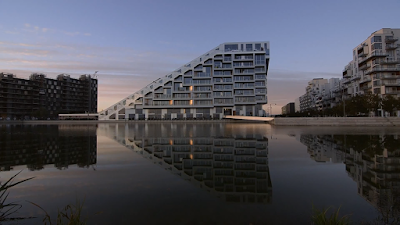 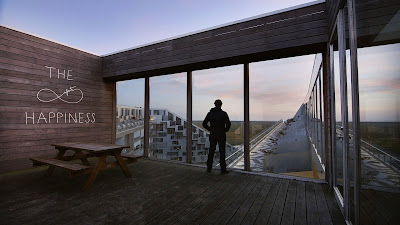 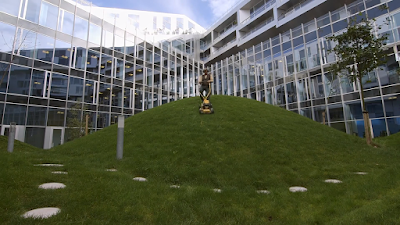 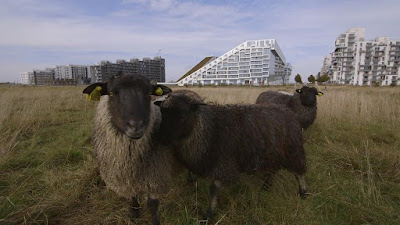 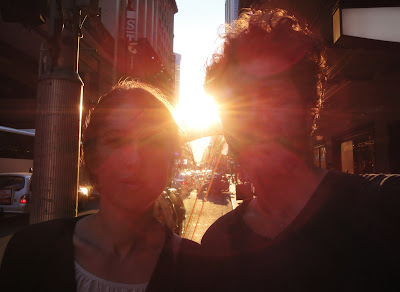 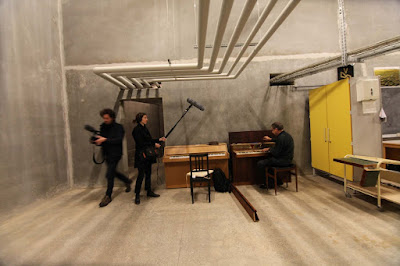 
While this is an architecture documentary on Copenhagen's “8 House,” a sleek, ultramodern design by Danish architect Bjarke Ingels of an eight-shaped house filled with glass windowed apartments for 500 residents that is as notable for the unique look and shape of the building, but the Danish and French filmmakers spent 21 days living on the premises to get a better feel of the effect it has on the residents living there.  Rather than focus on explaining the structure of the building and its technical details, instead the filmmakers offer us a glimpse inside, creating a more intimate experience of how it is viewed as “home.”  Going through a series of short vignettes, the film offers portraits of some of the many residents (and their pets) living there, each introduced by title, with colored highlights clearly indicating what portion of the building is being featured.  While one resident can’t speak glowingly enough about the “mad genius” that created this living experience, cocktail in hand, suggesting there is nowhere else like it in the world.  As if to prove it, we witness one man traverse the connected loop of all nine floors on a unicycle, where his skill at making some especially sharp turns is impressive, suggesting there is a certain joy and unique freedom simply by moving about the structure itself, while in another incident, we watch a mailman attempt to deliver a package, quickly getting lost, having to return to the spot of origin and trying again, scrutinizing a map on the ground level.  It’s almost as if the address numbers are in a code that needs to be broken, as they are not simply listed by floor.  Later we see a local deli make these gigantic bacon cheeseburgers with the works, where a kid is seen making an immediate delivery, but he’s even more confounded than the mailman, literally getting lost in a labyrinthian maze of wrong turns and blocked exits, becoming an absurd expression of utter futility.  As we watch a Pilate’s class in session, where the natural daylight brightness adds something cheerful to the workout experience, everyone has an open view of the outdoors, where you almost don’t feel like you’re “inside.”  The building is surrounded by a flat expanse, where there is a fenced-in herd of sheep nearby, also a small lake next to the building, offering fabulous views for fortunate residents, where we see a stream of perfectly decorated, Architecture Digest style rooms, both living rooms and bedrooms, whose main feature is the extraordinary view overlooking the lake, once again accentuating the natural splendor of the outdoors as seen from the inside.


Perhaps the most impressive aspect of this film is the witty choices of music, where there’s a clever, tongue-in-cheek irony associated with nearly every one, a touch of whimsy, where music plays a humorous counterpoint, where we listen to the familiar refrains from Carmen as we’re being introduced to a playful dog with a toy in his mouth, continually dropping it at the feet of the cameraman, then making a mad dash after it, happily retreating with the toy in his mouth, faithfully dropping it each time, and as the cameraman moves back, the dog scoops up the toy and brings it back to his feet, becoming a ritualized dance between man and animal that has cuteness written all over it.  Serving coffee on a patio outdoors, we are introduced to a successful middle-aged career woman who travels frequently, indicating she has a home in Juvet (home of the Juvet Landscape Hotel, The Hotel - Juvet, an utterly spectacular Norwegian hotel that is one of the architectural wonders of the world, featured as the Alaskan home in the recent film Ex Machina), but needed another home close to the Copenhagen airport that she could use primarily as an office.  Over time, however, she found herself spending more of her time here, which she attributes to the social architecture aspects of the building, which encourages communal living, greeting neighbors regularly, as you can’t leave your home without at least recognizing them.  Residents don’t even lock their doors, as they trust everyone, feeling no fear of break-ins, as crime is apparently not a factor in their lives.  We see a piano tuner, a man that restores old pianos by rebuilding them literally one key at a time, where we only learn afterwards that he’s blind.  There’s an amusing sequence showing the arrival of a handyman, one of the retired residents in the building who is always on call, offering his services (for free) in the spirit of being helpful, as he has the tools and wherewithal to fix things that are broken, while also feeling generous with his time.  We see him easily drill a hole in a cement wall in order to hang a picture, but the homeowner is such a klutz he can’t figure out how to hang the picture, fumbling around for a minute or two before he finally gets it.


Of course animals are always popular, where we see a gorgeous white furry cat that seems to have the run of the place, as there are easily accessible gardens leading to an open field, so there are plenty of grounds to explore.  This particular cat eyes an easy target hiding in the shrubs and darts after it, returning back to the sidewalk, bird in mouth, and promptly gulps the whole thing down right on camera, leaving only a feather hanging out of its mouth before scurrying back to the apartment complex, running up and down stairs, turning corners, seemingly wandering endlessly before finally entering a little cat door of his home.  While the residents are obviously financially successful, there is a mix of older and younger, where one of the best features in the film is capturing the joyous lives of children (as perhaps only the French can do so well).  We see them in class painting pictures, following several as they are just developing some ideas before then seeing the final product on display, a bright and colorful array of youthful optimism.  Next they all gather together, faces painted and decorated, for a Halloween-style scavenger hunt, following clues provided of an escaped mad goblin on the loose, but is still lurking nearby, so their goal is to find him.  It’s a sight to behold to see them scampering around the premises, running with a reckless abandon, screaming at the top of their lungs, where they are clearly excited by this game.  But just a few moments later, one of the adult leaders of the hunt has to reassure them that the ghosts and goblins aren’t real, that she made them up for this game to play, as they were petrified they were going to be eaten, or something terrible was going to happen to them.  The children are delightful and they are beautifully captured by the filmmakers.  In contrast, we visit a couple living in a penthouse suite at the top, offering supreme views of the vast expanse.  But he’s troubled, on the verge of a heart attack, claiming he has to deal with the rudeness of tourists who routinely break into his private outdoor deck to take photos, arriving in tour buses, ignoring the keep out signs (written in three languages), stepping over the locked chain to block his view while invading his privacy, claiming his security camera has captured over 1400 invaders in just two months.  So apparently all is not bliss and infinite happiness remains a dream as yet unrealized by those at the top.
Posted by Robert Kennedy at 12:03 AM