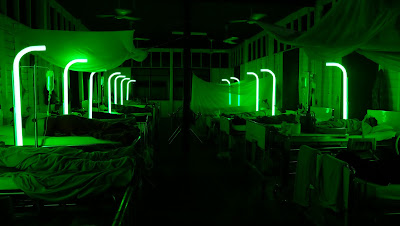 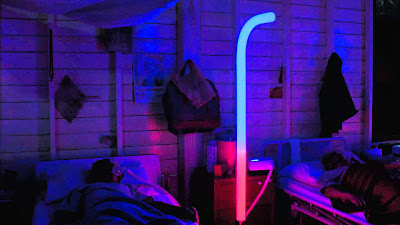 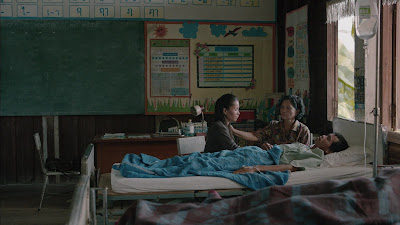 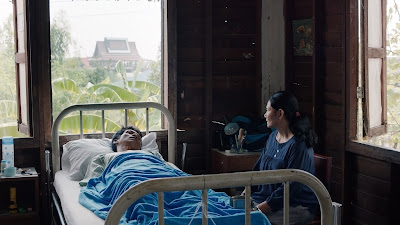 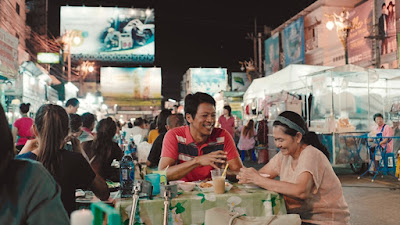 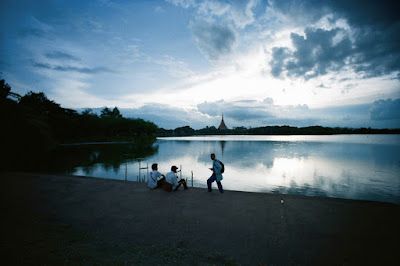 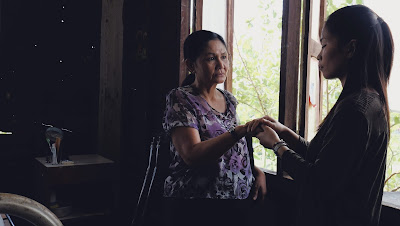 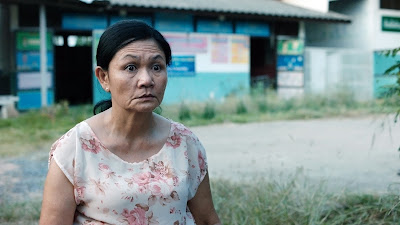 
While many have been drawn to this critically praised film, another of an unending number of glacially paced Weerasethakul films where the past protrudes into the present creating a languorous, dreamlike atmosphere, it was actually the film of the festival that held the most anticipation and highest hopes ahead of time for this viewer, but also the biggest let down, where the rural hospital setting seemed to be the closest to SYNDROMES AND A CENTURY (2006), the most dramatically complex and visually intoxicating of the director’s films.  But as the 7th film seen by this director, this turns out to be among my least favorite among them.  Premiering at Cannes, 6 of the 19 films screening in Un Certain Regard won awards, but this film was not among them, yet there were outcries in critical circles, including Stephanie Zacharek from The Village Voice, Jordan Cronk from Reverse Shot, Nicolas Rapold from Film Comment, and Daniel Fairfax from Senses of Cinema, charging that its exclusion from Competition films was “incomprehensible,” bordering on criminal, calling it “the towering achievement of Un Certain Regard.”  Compared to everybody else, this director’s films defy description, as he so beautifully integrates a dreamlike mysticism into the narrative of his films, always drawing a line between dreams and waking life, where voices emanating from a distant past or ghosts from the dead often visit the living, where blurring the lines between what’s real and imaginary is usually indistinguishable.  Perhaps one has simply grown tired of this exact same scenario occurring in all of his films, all portrayed so matter-of-factly, as no one ever acts surprised to see them, where he hasn’t really discovered any new way of visually expressing this phenomenon, but continues to make films with similar narratives that emanate from the same familiar world.  It is difficult to shake the fact that one feels like they have seen this film before, though perhaps in another variation on a similar theme.  After awhile it stops feeling revelatory.


Filmed in the director’s home town of Khon Kaen in northeast Thailand, a children’s schoolroom has been converted to a military hospital for soldiers suffering from a rare sleeping sickness, each lying comatose in beds connected to an oxygen mask, also these glowing fluorescent tubes of light that change in color from pastel pink to neon green, easily the most interesting visual feature of the film, and something that is never explained other than to suggest it is an American technology designed to help produce more peaceful dreams.  Jenjira, Jenjira Pongpas Widner, a Weerasethakul regular going back to BLISSFULLY YOURS (2002), is a former student at the school who volunteers to help care for the ailing patients, where she meets Keng (Jarinpattra Rueangram), a medium who can decipher sleeping men’s thoughts and dreams, discovering the soldiers are sleeping on the burial grounds of an ancient royal kingdom and the site of past civil wars.  It is suggested the ancient mythical warriors are still fighting their battles in the past, drawing strength from the sleeping soldiers in the present, which may prevent them from ever awakening.  This sense of pervading fatalism is at the root of the film, especially after the military took over in Thailand last year following the May 2014 coup d'état, where the country is now run more as a military dictatorship, arresting and imprisoning those they consider dissidents, remaining in jail until they sign an agreement not to engage in political activity, which has always been a lingering fear of this director who is no stranger to censorship, having previous films denied certification for showing monks playing guitars or doctors drinking alcohol, where it’s currently punishable by fifteen years in prison for criticizing the king or insulting the royal family.  As a result, this film sends a message of living in an uncomfortable reality, one that is haunted by the violence of the past, where sleep is no avenue of escape, as ignorance is not bliss, and certainly this film leaves you wondering whether the soldiers will ever awake, as if Weerasethakul is asking the same question from his fellow countrymen.


Like films coming out of Iran, the director is forced to use coded or symbolic language, something that he acknowledges is “frustrating and suffocating,” as it is on the viewer. Supposedly based on an incident occurring about three years ago where 40 soldiers were mysteriously quarantined in a northern Thai hospital, which was seen as part of the government’s reaction to suppressing the latest wave of political dissent, this is strangely reconfigured into the film’s narrative.  Jen spends a good amount of time moisturizing the body of a soldier named Itt (Banlop Lomnoi), who has no family visitors, until his eyes suddenly open and he awakens for the first time, reporting he recognizes her from his sleep.  As they have lunch in a hospital lunchroom, there is a giant portrait of a military general hanging on the wall, none other than Field Marshall Sarit Thanarat, a ruthless dictator who had his hand in several major military coups in the late 40’s and 50’s, usually followed by a declaration of martial law and the banning of all other political parties, where his regime is considered the most repressive and authoritarian in modern Thai history.  Linking the past to the present, at one point in the film Jenjira nonchalantly tells her boyfriend Richard (Richard Abramson), an American relocated to Thailand, “You’re a foreigner, you won’t get it,” a line lifted directly from the prevailing military junta in response to international criticism of the military running Thailand, spoken to the international press representatives of The New York Times, The Guardian, CNN, and the BBC.  Jenjira develops an easy friendship with Itt, who drops in and out of consciousness, but spends most of his waking moments with her, where he discovers heightened senses, noting he can smell each ingredient in the food while also feeling the heat radiating from the street lamps.  They go to a movie together, watching the trailer for some ridiculously violent horror film before theater patrons are lawfully required to stand for the Thai national anthem before a movie begins.  Afterwards they have dinner on the city’s streets, where Itt calmly confesses, “I see no future in being a soldier,” before falling asleep in the middle of a meal, where bystanders walking by stare and point to them in a weird intersection with the real world.


Returning to his hospital bed, the patients undergo some kind of experimental therapy in the evenings, where the changing glow of the lights offers a haunting image of being connected to a constantly evolving spiritual domain.  This director has always remained fascinated by the possibilities that exist outside our human existence, where the Buddhist notion of reincarnation suggests multiple realms of the living, both former and future, all somehow intermingled into a higher consciousness that allows for the existence of divine powers.  Jen lights a candle for Itt at a local Buddhist shrine before having an outdoor lunch where she is visited by two long-dead Buddhist princesses (Sjittraporn Wongsrikeaw and Bhattaratorn Skenraigul), both seen earlier at the shrine, now summarily appearing in the present dressed in contemporary clothing, where Jen doesn’t even act surprised, shot as a seemingly mundane moment as they remind her the hospital sits on sacred ground.  Then, as if turning the pages of a fabled story with Jenjira as the main character, they join her in exploring an overgrown park decorated with slogan-like signs, before wandering into a forest, discovering the ruins of an ancient palace and temple, taking a tour of the former grounds, somehow bringing it back to life, all existing in a quiet state of tranquility.  Most of the second half of the film involves a lengthy conversation between the young medium Keng and Jenjira, where Keng is able to read Itt’s dream thoughts and memories while he sleeps, communicated with enough certainty that Jen tells him at one point, “I have seen you dream.”  While this transmigration of souls can get confusing, Weerasethakul breaks it all down to a moment of intimacy between the two women that feels strangely weird and off-putting, as the behavior has sexual overtones, but really it’s just an expression of tenderness that is completely in keeping with the subject of trauma recovery and emotional healing.  Throughout this entire film, bulldozers are tearing up the land just outside the hospital of what used to be a soccer field, where the incessant noise is certainly not conducive to the usual quiet of a hospital zone.  On this broken ground, however, lies some sort of future, whether searching for something beneath the surface, or constructing something above, as kids still attempt to play soccer among the dirt craters.  This film suggests it’s hard to see with our own eyes what lies beyond, as we’re constantly held back by our own human limitations and the endless pain of the past.  Despite the magical elements of the narrative, attempting to stitch together the alternative states of existence, this remains one of the least involving films of the director’s career, where the camera rarely ever moves in this quietly underwhelming cinematic dreamscape.
Posted by Robert Kennedy at 12:02 AM