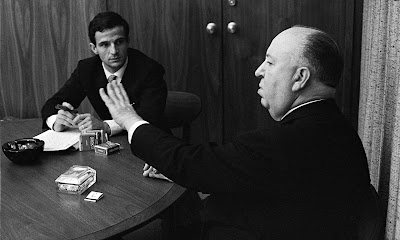 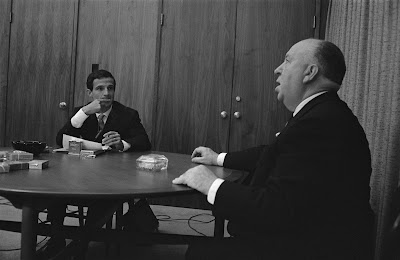 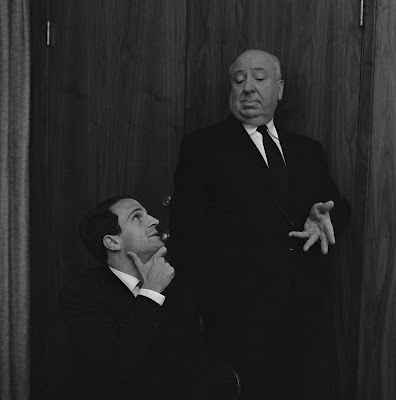 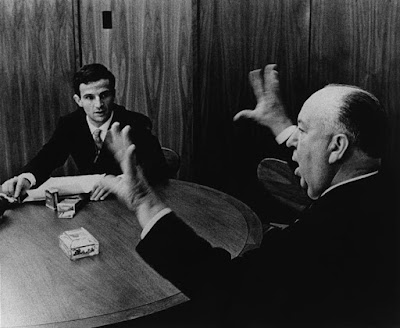 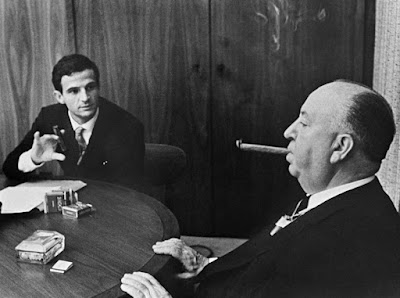 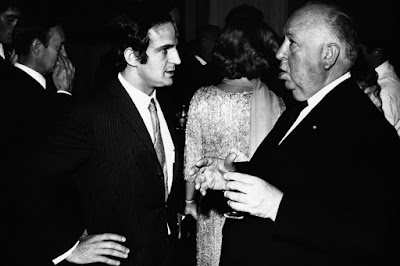 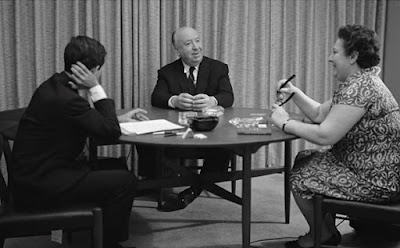 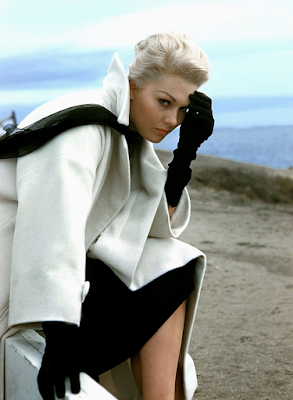 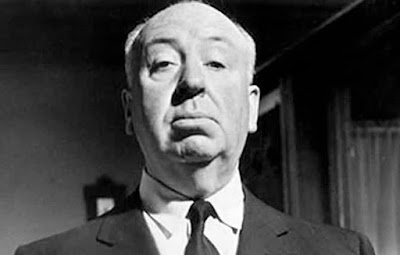 
Certainly one of the more interesting “meetings of the minds” to come along in the last half century took place in the sterile offices of the Universal Studios of Hollywood for six days of discussion in August 1962 when 63-year old director Alfred Hitchcock agreed to sit down to an exhaustive interview and critical analysis of literally every film he ever made with 30-year old French film director François Truffaut, who had completed three films of his own by that time, and was otherwise known as a former critic and editor of the influential Cahiers du Cinéma magazine.  One of the rare books about film made by film directors themselves, after accumulating 50-hours of tape, the next four years were spent transcribing and editing the tapes into a book format, where extra sessions were needed to cover the subsequent films Hitchcock made, resulting in a book entitled Hitchcock/Truffaut published in France in 1966, released a year later in an English translation.  The book nearly overnight changed the perception of Hitchcock, a cinematic virtuoso who made his start during the Silent era before working in Hollywood, whose films were instantly recognizable, known as the “Master of Suspense,” but was viewed at the time more as a popular entertainer perhaps best known for his caricatured round profile and perfectly enunciated “Good Evening” greeting while hosting his own television show Alfred Hitchcock Presents from 1955 to 1965, using television as the medium for a series of blood curdling murder mysteries presented week by week, to not only a world-class filmmaker, but in the running for the greatest director of all time.   Asked if he wanted to piece together a documentary movie out of the surviving archival material from that interview, Film Comment editor, occasional Cahiers du Cinéma critic, and programmer of New York’s Film Society of Lincoln Center’s Kent Jones responded, “Fuck yeah!”  Broadening the idea of a conversation on film, with directors discussing the works of other film directors, Jones brought in contemporary filmmakers who have been successful in their own right to offer their views on Hitchcock, including the exclusively male-centric comments of American directors Wes Anderson, Peter Bogdanovich, David Fincher, James Gray, Richard Linklater, Paul Schrader, the ever reliable Martin Scorsese, Japanese director Kiyoshi Kurosawa, and from France, Olivier Assayas and Arnaud Desplechin.  It might have been nice to hear the views of Jane Campion, for instance, as she is thoroughly rooted in the psychology of Hitchcock, as evidenced by In the Cut (2003).


One of the reasons the book is so successful is due to the incessant hours of meticulous research and careful preparatory work put in by Truffaut ahead of time, seen as a labor love where he invested as much thought and effort to these interviews as any film he ever made, perhaps taking even Hitchcock by surprise, as his knowledge of Hitchcock’s films elevated the discussion to unforeseen heights, offering a candid view the public had never seen before, opening a window into the very soul of Hitchcock.  The book also differentiates the way artists are perceived and written about in Europe, with a certain degree of reverence, and how they are viewed in America, where disdain is commonplace and the scrutiny more closely resembles “What have you done for me lately?”  Truffaut had interviewed Hitchcock earlier for Cahiers when he was in France working on TO CATCH A THIEF (1955), but was disappointed in the vague and rather unremarkable responses he gave when questioned about aspects of the French “auteur” theory, convincing Truffaut that only a prolonged, more in-depth interview was required.  It all started with a series of complimentary letters exchanged between the two men beginning in June of 1962 when Truffaut proposed the idea to Hitchcock:  “Since I have become a director myself, my admiration for you has in no way weakened; on the contrary, it has grown stronger and changed in nature.  There are many directors with a love of cinema, but what you possess is a love of celluloid itself.” Hitchcock responded, “Dear Mister Truffaut, your letter brought tears to my eyes, and I am very grateful to receive such a tribute from you.”  With American-born Helen Scott, the daughter of an American journalist stationed in Paris acting as translator, the two men blazed a trail through the Hitchcock lexicon, picking apart traces of the Hitchcock film vocabulary that the public has become fascinated by, discovering the secrets behind famous shots, like a particularly sinister moment in Suspicion (1941) when Cary Grant carries a glass of milk that may or may not be poisoned up a flight of stairs, where Hitchcock had the audacity to place a small lightbulb in the glass, adding a special glow of distinction, or unraveling elusive meanings, like the influence of Hitchcock’s own Catholicism on films like STRANGERS ON A TRAIN (1951) or The Wrong Man (1956), where Truffaut suggests the framing of the wrongfully accused Henry Fonda, viewed only in silhouette, bowed silently in prayer in front of an iconic portrait of Jesus, that dissolves into a facial close-up of the actual guilty man, could only have been filmed by a Catholic.


To Truffaut’s credit, he did not rely upon production stills that often never appeared onscreen, but instead borrowed 35mm prints from studio archives, including stills from British titles not available in France, and used them to provide shot-by-shot presentations of sequences, a vital strategy in understanding the near mathematical precision used in Hitchcock’s calculated editing strategy.  The book is chalk full of these accompanying photographs, along with handwritten notes by Hitchcock or drawings conceived during the conception of the films, where Truffaut’s somewhat literary approach brings these films to life with a more intimate understanding.  It also becomes clear that in France, André Bazin, film theorist and co-founder of Cahiers du Cinéma in 1951, is considered the father of film criticism, while Jean Renoir represents the epitome of French filmmaking.  But in Hollywood, a world the Cahiers critics certainly revere, no one is more admired than Hitchcock.  Wes Anderson describes his copy of the book is so worn out from constant use that it is only held together by a rubber band, while various directors chime in discussing their favorite Hitchcock moments, dissecting notable scenes, where who better than Martin Scorsese could discuss the powerful effect of framing and editing in the notorious shower scene of Psycho (1960)?  In discussing Vertigo (1958), specifically the scene when Judy (icy blond Kim Novak) perfectly resembles Madeline, the beautiful dead woman Scottie (James Stewart) is still obsessed by, Hitchcock acknowledges “I indulged in a form of necrophilia.”  In a particularly graphic moment, just as Scottie is about to consummate his desires with her, he sends her back into the bathroom because a single detail is wrong, as she is wearing her hair down while Madeline wore hers up.  “While he was sitting waiting, he was getting an erection.”  At this point Hitchcock politely asks Truffaut to turn off the tape recorder so he can tell a story not for public consumption that apparently only Truffaut and interpreter Helen Scott were privy to hear.  As all the principles are now deceased, we will never know what the story was, but one can only imagine the dirty little details.  It is this element that fascinates David Fincher, as Hitchcock’s films (like Buñuel’s) are filled with his own personal fears and fetishes, as well as sexual daydreams, where he made no attempt to hide his own psychological impulses from the characters that appear onscreen, which is one of the cherished aspects of a Hitchcock film.


Somewhat disappointing was discovering the interview was never filmed, only taped, so there are really no new revelations in the film.  Most of the photographs taken at the time have already been seen, but certainly one was initially hopeful to see personality traits developing during the course of the interview, where Truffaut tends to be eagerly enthusiastic, filled with an abundant supply of energy, while Hitchcock is the picture of aristocratic taste and refinement, never moving a muscle unnecessarily, where he is almost always portrayed in an economy of motion.  His mordant sense of humor comes through as he describes various scenes from some of his films, where he obviously relishes how the audience is impacted from the exact precision utilized to set up scenes.  Scorsese was forever affected by the aerial shots of Hitchcock, which he equates with the power of God on high, as if He’s looking down upon us, including a terrifying airborne shot of the town on fire in The Birds (1963), where the camera literally descends from the clouds above, as if casting ultimate judgement over all of us, where one of the most famous is a spectacular camera shot from NOTORIOUS (1946) that begins with a high overview of a party, as seen from the top of a banister of winding stairs, following the sweep of the action with a crane shot descending into the crowded atmosphere on the floor below, where the camera goes in search of the most important item in the room, where the crux of the film depends on the discovery of this single detail, zeroing in on a couple where after a number of shifting focuses we can identify an immaculately dressed Ingrid Bergman fidgeting nervously, as the camera zooms in on an object she’s holding in the palm of her hand, which is revealed to be a key in a stunning, perfectly timed close-up.  All the drama is compacted into the tiniest space imaginable.  While the film is heavy on Hitchcock, and does at least consider the possibility of what might have happened if he had loosened the authoritative grip over his style, but it has little to say about Truffaut, failing to explore the director’s profound influence on him, where it’s impossible to think of THE BRIDE WORE BLACK (1967) without the droll, gallows humor so representative of a tongue-in-cheek Hitchcock. While it might have been nice to get Hitchcock’s take on that film, instead he finds it incomprehensible to discover the unscripted, improvisatory style Truffaut used with his actors in JULES AND JIM (1962), as that’s simply something he would never allow.  Also missing is the considerable influence of Alma Reville, Hitchcock’s longtime wife who literally had her hand in every Hitchcock film ever made, was his closest collaborator and most trusted ally, but is hardly ever mentioned, which in this modern era seems like a criminal oversight.  So while the book remains a classic for film lovers, something that will be revered forever, the same can’t be said for this film, as the director’s comments aren’t particularly memorable, though as a trip down memory lane it’s good fun and amusingly interesting, following the example of Two in the Wave (2011), but never rises to a level of scholarship or essential viewing.
Posted by Robert Kennedy at 12:01 AM