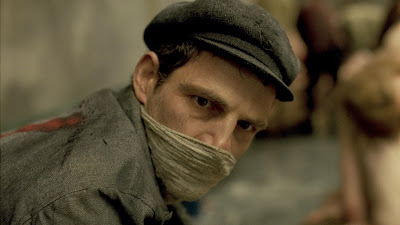 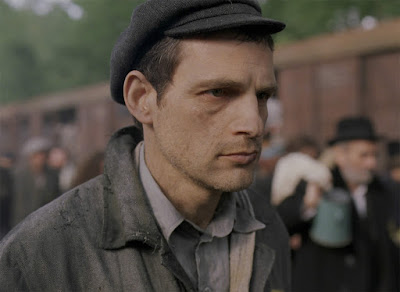 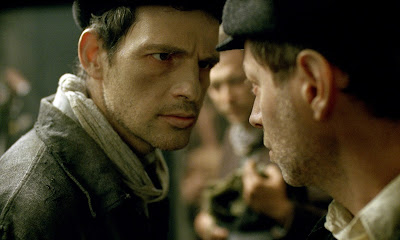 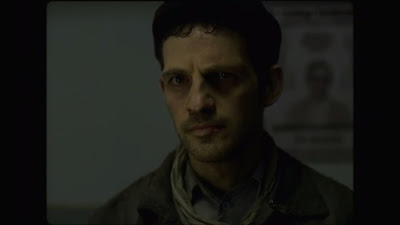 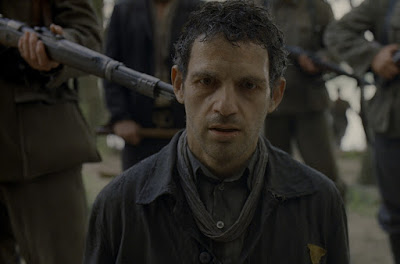 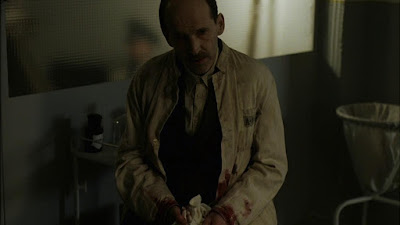 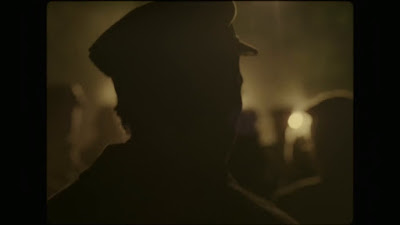 Since then, at an uncertain hour,
That agony returns,
And till my ghastly tale is told,
This heart within me burns.


—The Rime of the Ancient Mariner, by Samuel Taylor Coleridge, 1798


A protégé of Béla Tarr, working as his assistant director on THE MAN FROM LONDON (2007), László Nemes in his premiere feature was the winner of the Grand Prix (2nd place), FIPRESCI, and François Chalais (Best Journalism) awards at Cannes with one of the most praised films in competition, finding a new and unique way to tell the story of the Holocaust, opening in a blur, where a character gets closer and walks into the focus of the frame, holding that individual steadily in focus and following him for the remainder of the film, as everything seen is presented from his point of view.  Shot by Mátyás Erdély, much of it in long takes, creating a strange, almost dreamlike effect, where everything around him remains in a blur, always out of focus, a technique that initially grabs the viewer’s attention, but becomes repetitive, perhaps even monotonous after awhile, and may not hold up for the duration of the picture.  Also winning the Vulcan award for technical achievement was Tamás Zányi, creating one of the most remarkable sound designs in cinema history, a relentlessly brutal depiction of the Holocaust as presented through background noises, where threatening Nazi commands are continually barked out, usually accompanied by the sounds of shovings, beatings, screams, machine gun fire, and ferocious dogs barking, a non-stop offensive barrage that becomes the most astonishing aspect of the film, especially considering viewers can only partially see what’s happening on the peripheral of the frame, yet remain intensely glued to the screen.  Géza Röhrig plays Saul Auslӓnder, a beleaguered Jewish prisoner at Auschwitz that is part of a Hungarian team of Sonderkommandos whose death sentences have been temporarily reprieved, offered special privileges, used by the Nazi’s to help herd each new arrival of Jews transported by trains into the gas chambers, helping provide reassurance that they were heading for showers instead of their instant deaths, then clearing out the bodies for burning or burial, cutting hair, extracting gold from their teeth, removing the clothes and personal belongings, basically doing the dirty work in order to maintain the efficiency this system of mass extermination requires.  After a period of about 3 or 4 months, the Sonderkommandos are themselves executed, replaced by the formation of new teams whose ghastly first job assignment is clearing the bodies of the previous group of Sonderkommandos.  In this way, if all goes according to plan, there will be no surviving Jewish witnesses to the Holocaust.


Without ever showing the graphic horrors that might be impossible to restage, this film instead recreates what it sounds like, where teams of Jewish workers are continually worked to the point of mental and physical exhaustion, where they are under no illusion what awaits them.  However, the longer they are kept alive, fully aware of how the camps operate, the larger their threat becomes in exposing to the world just what the Nazi’s are up to, as the extent of deaths from these extermination camps was not revealed until “after” the war was over.  Always under the gun of the Nazi’s, the daily grind of living among the constant stench of such massive human slaughter becomes psychologically numbing.  By shooting the film in this way, holding the camera fixed on Saul’s anguished face, shot in a boxed, 1:37 aspect ratio, it literally takes us inside his head, accentuating the pressures of his psychological torment, where the film is largely a window into his distraught state of mind, forced to completely shut out the outside world, where he is considered a walking casualty among the dead, where there is little to distinguish between the living and the dead.  The onslaught of Nazi hatred and contempt is the same, where individuals are routinely ridiculed and shot on the spot for not following orders quickly enough.  The attempt to get under the surface is an altogether different one, using virtuoso experimental techniques to express the incomprehensible, as no one could fully grasp the totality of the death camp experience.  The extreme degree of horror of the death camps affects everyone differently, where the director is attempting to recreate the intensity of experiencing that horror by vividly personalizing it through one man’s ordeal.  Some may find that attempt distasteful, exploiting the memory of the dead through harrowing “action” sequences, actually borrowing techniques from conventional action thrillers mixed in with the experimentation.  But it’s important to consider the Holocaust created exceptional circumstances where a different set of rules applies to anything remotely defined as “human” understanding.  Hatred and an utter contempt for human life contribute to a collective demoralization the likes of which the human condition had never seen, where figuring into the making of every decision is an agonizing fear and the constant threat of death.  Who are we to question the acts or the mindset of anyone having to live through this unimaginable trauma?


The film inhabits what Auschwitz survivor and author Primo Levi called “The Gray Zone” in his memoir collection of essays from his 1986 book The Drowned and the Saved, and recalls Tim Blake Nelson’s extraordinary play turned into a feature-length film, THE GREY ZONE (2002), which was also based on Levi’s essays and similarly featured the plight of a group of Sonderkommandos, but also included the documented, true life experiences of Dr. Nyiszli, a Jewish doctor who was ordered by Nazi SS Officer and physician Josef Mengele to perform certain nefarious medical experiments due to his high expertise, who survived Auschwitz and lived to reveal what happened inside the death camps.  In both films, the story turns on the discovery of a miraculous child survivor from the gassings, perhaps buried underneath the dead bodies where air pockets remain uncontaminated, which turns into an obsession to save the life of the child, even if it endangers a planned uprising that could save thousands.  In this film, the Nazi’s brutally kill the child that Saul comes to believe is his own, which is the subject of some dispute, but may have been an illegitimate child he neglected while he was alive, spending the duration of the film desperately seeking to find a rabbi among the harrowing confusion of the camps, putting his own life at risk at least a dozen times as he becomes unhinged, obsessed with the all-but-impossible task of giving the child a proper Jewish burial where a rabbi can perform the kaddish.  Similarly, there is also a secretly planned Jewish rebellion, inspired by the actual events of an October 7, 1944 uprising at Auschwitz (The Revolt at Auschwitz-Birkenau | Jewish Virtual Library), where a unit of Sonderkommandos was largely made up of Hungarian Jews, becoming a last ditch effort that might impact upon their otherwise all-too-certain fates, while also hoping to smuggle photos of the crematoriums to the outside world. Throughout this ordeal, Saul is chastised by his fellow prisoners for not pulling his weight, for neglecting their cause, claiming “You’ve abandoned the living for the sake of the dead.”  This is largely the moral dilemma of Saul, who at least for a brief period rediscovers within himself the stirrings of life, even while totally surrounded by a system of enveloping madness and death.  For whatever reason, the director decides the release the claustrophobic vantage point, expanding the field of vision near the end with questionable results, but in doing so implicates the neighbors and surrounding community that witnessed the mass starvation, constant shootings, and the burning of human flesh in crematoriums built exclusively for that purpose, while remaining silent.
Posted by Robert Kennedy at 12:11 AM