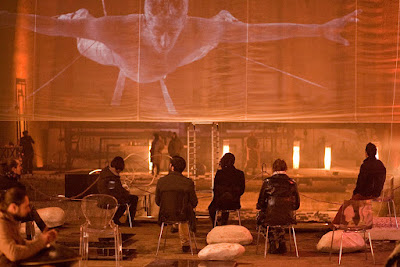 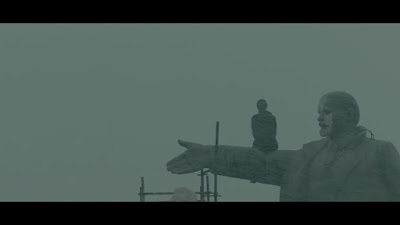 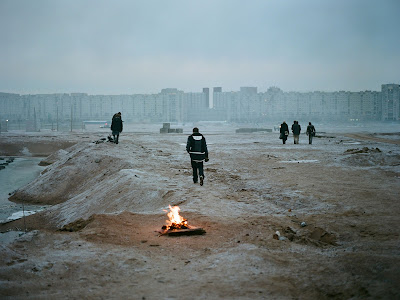 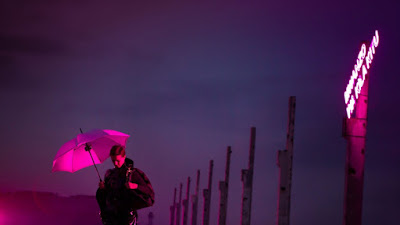 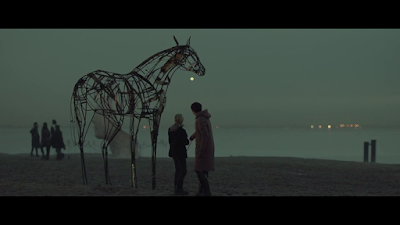 Aleksei German Jr. is not only the son of a legendary Russian filmmaker Aleksei German, director of the extraordinary Soviet era WWII film Trial On the Road (Proverka na dorogakh) (1971), whose mother Svetlana Igorevna Karmalita was a screenwriter, but also the grandson of Yuri German, a Soviet Russian writer, playwright, screenwriter, and journalist.  German Jr. was called upon to complete (with the scriptwriting help of his mother) the unfinished final work of his father, HARD TO BE A GOD (2013), a film he began in 2000 and finished shooting in 2006, but died in 2013 before finishing the film, an inexhaustibly squalid adaptation of a 1964 Russian novel by Arkady and Boris Strugatsky, the writers of Stalker (1979), with echoes of the Dark Ages and the end of time.  Continuing on a similar theme in his cinematic debut, German Jr. has created an apocalyptic post-Soviet netherworld of defeated and hopeless people roaming the earth like zombies stuck in an impenetrable void of rootlessness and aimlessness, a post-capitalist bygone era already disconnected from their Russian past, where characters speak in a kind of untranslatable gibberish, as words have lost all meaning, where they are the personification of Gogol’s Dead Souls wandering the earth in a kind of incoherent fog of indifference.  Nearly indecipherable, the film is so oblique and abstract that it defies all meaning, becoming a challenge to any audience, including many walkouts, but what it attempts to convey is the all but broken and dysfunctional state of affairs in contemporary Russia.  Winner of a Silver Bear for cinematography at the Berlin Film Festival, the crew spent four miserable months under difficult conditions shooting in and around St. Petersburg in the dead of winter where every house seems to be in ruins, while the rest was shot in the Ukraine, filming only 30-40 minutes each day when the evening sky was still light but the city lights had also turned on, supposedly creating ideal conditions for shooting.  The film is accentuated by a dreamlike strangeness from the remoteness of the locations, shot by Ukrainian cinematographer Serhiy Mykhalchuk and his Russian counterpart Yevgeni Privin, a joint Russian-Ukrainian venture, something unlikely to happen again for many years to come, with sets and props created by Yelena Okopnaya, all contributing to a washed out gloominess that describes the starkly eerie look of the film.

Adding to the film’s mind-numbing reputation are incredibly stupid comments coming from the cast suggesting they may be full of themselves, in this case Louis Franck, a Swiss writer, director, musician, and actor playing an architect in the film, levelling infuriating criticism against fellow Russian filmmaker Andrei Zvyagintsev whose film Leviathan (Leviafan)  (2014) won accolades in the West, including Best Screenplay at Cannes while en route to becoming the first Russian film to win a Golden Globe award for Best Foreign Film since Sergei Bondarchuk’s WAR AND PEACE in 1969.  According to Franck in a recent October, 2015 interview with The Calvert Journal, Neon nation: filmmaker Aleksei German Jr on capturing ...:

“A lot of contemporary Russian artists are really lost,” Franck continues, warming to his theme. “When you had the Soviet Union you had a clear frame to rebel against or to be subservient to. You knew the parameters. Now, there are a lot of talented people but they end up just reflecting upon themselves. They don’t seem to have the balls to do their own thing. To say, ‘This is what I am and I don’t care’. For example, [Leviathan director Andrei] Zvyagintsev. He wants to be the Coen brothers. That’s it. Leviathan from a Russian point of view is bullshit. It’s pandering to the west, it doesn’t represent Russia at all. For me, German Jr’s film is the ‘real’ Leviathan.”

For Franck, Russian cinema’s fixation on its own outward appearance to the West is nothing new. “It was the same even in the golden period of Russian cinema, the 1950s and 70s, when you had really mind-blowing films being made,” he continues. Back then, of course, there were other directors who were guilty of this stylistic superficiality. “Tarkovsky was the pretentious one; the one who would have the Marlboro packet sticking out of his breast pocket, but with Russian cigarettes inside. Says a lot about the guy.”

This interview resurrects the false prophets of Dostoyevsky’s Grand Inquisitor, suggesting you can possess false knowledge that may unwittingly effect your worldview, like jealously dismissing Zvyagintsev, though he is easily one of the most outstanding contemporary Russian directors, while thirty years after the fact still holding out petty resentment towards Tarkovsky, arguably Russia’s greatest filmmaker, as if he abandoned and betrayed Russia by making his final films “outside” Russia due to continued censorship issues that Tarkovsky viewed as needless harassment, instead of respecting his place among the greatest filmmakers that ever lived.  This kind of personal arrogance of outward contempt while living under a cloud or bubble does reflect the artistic style of German Jr.’s film, demonstrating a kind of “Fuck You” attitude toward the audience by making a nearly incoherent film with few connecting parts.  Set in the near future of 2017, exactly one-hundred years after the Bolshevik Revolution, a voice-over introductory prelude reveals Russia is a country “crucified between the past and present,” suggesting the world is on the verge of chaos, perhaps due to the disastrous effects of the once promising phenomena known as globalization and capitalism, where another world war feels imminent.  Told in non-linear fashion over the course of seven chapters, the story centers upon an unfinished skyscraper looming off in the distance pointing upwards towards the sky, currently awaiting demolition, apparently the effects of a failed economy, and an apt metaphor for a society on the verge of collapse.  Returning home to Russia are two twenty-something children of a recently deceased oligarch, Sasha (Viktoriya Korotkova) and Danya (Viktor Bugakov), both mourning the loss of their father while unclear what the future holds.  Thinking they are entitled to a split of his vast fortune, where they could continue to travel the world, the police inform them otherwise, claiming their father is the crook who commissioned the unfinished building and is now criminally disgraced, though it appears he could have been politically framed in a power grab to steal his money by corrupt officials.  Sasha discovers the horses in her father’s stable have been starved, or possibly poisoned, leaving an ominous feeling of menace and sinister motives.  While mulling all this over, they wander past a frozen lake in some mysterious location in an abandoned field that could just as easily be the backlot of a closed down film studio with massive prop Soviet statues lying inertly upon the shoreline, including a giant figure of Lenin, among others, all in a state of decay, fragments of a disappeared world that existed long ago but has since lost all its meaning.


An impressionistic mosaic loosely strung together in fragments, it portrays a large unnamed city that feels deserted and is slowly disintegrating.  With each subsequent chapter, new characters are introduced, introduced in the opening as “superfluous people,” mostly a cast of misfits and outcasts that wander listlessly through the bleak, icy landscapes trying to figure out just what’s gone wrong, where typically the film consists of isolated characters walking along the frozen beach, uttering meaningless catchphrases like “The past is gone,” “We can build a new world, we just need to get rid of the dead weight,” or “In twenty years the climate here will be tropical,” and then gazing around intently looking for answers.  While there is an inherent absurdity to the established tone of uselessness, there are also well-placed moments of humor, like when Sasha chides others for not having read Tolstoy and War and Peace, where she’s greeted politely by a group of Japanese investors before responding insultingly, “Panasonic-Kurosawa-Harakiri-Sushi.”  While there are moments of vague action, such as a twelve-year old girl named Sveta taken hostage by a group of heavily armed Russian mafia, eventually beating up and shooting a drug addict that attempts to intervene, there is also a Kyrgyzstan construction worker who doesn’t speak Russian searching for a fellow countryman in a deserted industrial area, where advertisements are mysteriously projected in the clouds, a frustrated, supremely over-qualified museum tour guide and multilingual cultural expert Nikolai (Merab Ninidze) with a useless PhD working in a crumbling state museum that is threatened by redevelopment, a Jewish real estate lawyer  Marat (Konstantin Zelilger) that is troubled by a recurring dream, shown in flashback, recalling the tumultuous revolts of the Soviet satellite republics in the early 90’s after the dissolution of the USSR, while Louis Franck plays Petr, the beleaguered architect of the unfinished building who tried to light himself on fire when the construction stopped, but failed because the matches were wet.  Currently out of work, having fallen from grace, he eyes the future with the fatalism of someone who has survived Stalinism, where there’s no going back, instead he optimistically invites everyone he sees to a gigantic birthday bash he’s planning that we never see, promising “a hyena from the Galapagos.”  While themes of xenophobia, rampant political corruption and inequality are explored, there is no effort to explain why the world is crumbling, as this could be about the fall of capitalism or perhaps the cutthroat nature of the real estate market, where Russia is a country torn apart from within, a once proud nation with delusions of grandeur, an unquestioning belief in authority, and a yearning desire to break free of the past.  Bathed throughout in an oppressive Slavic doom, exiled and alienated from their own rich heritage, German attempts to get at the heart of the Russian soul, but in doing so only discovers the emptiness of the present, showing a destitute world teetering on the edge of ruin.
Posted by Robert Kennedy at 12:21 AM