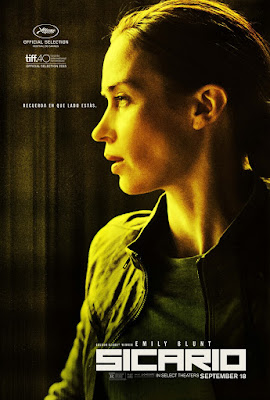 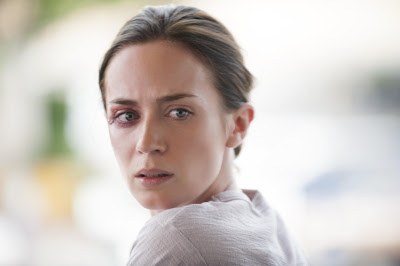 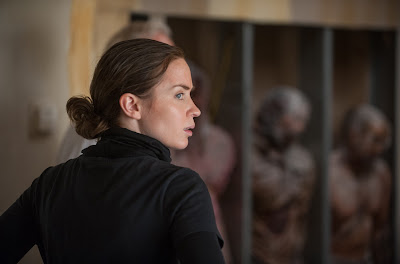 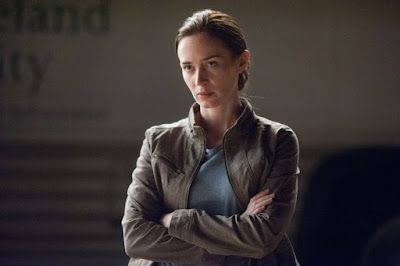 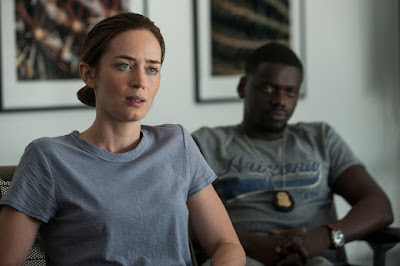 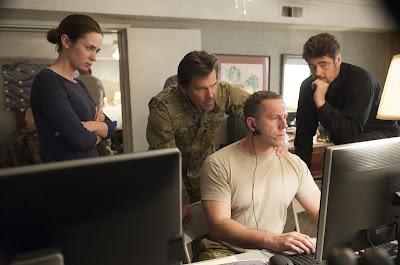 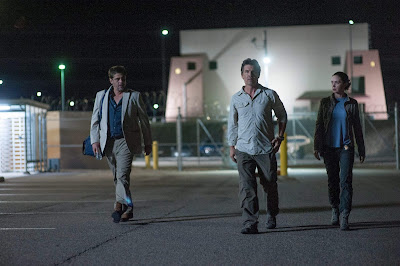 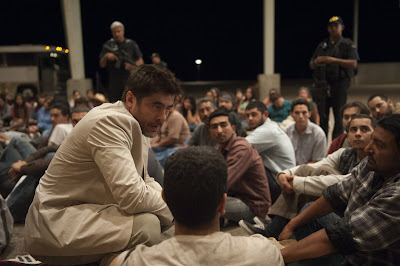 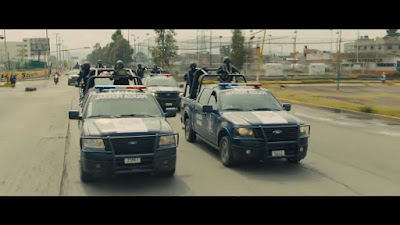 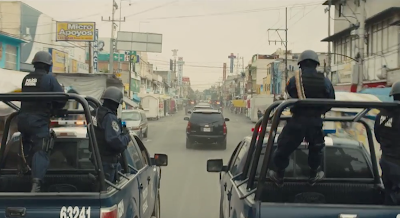 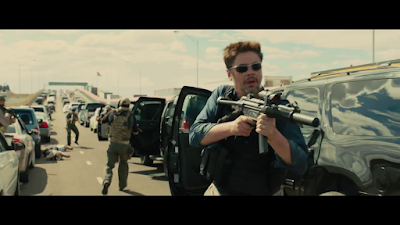 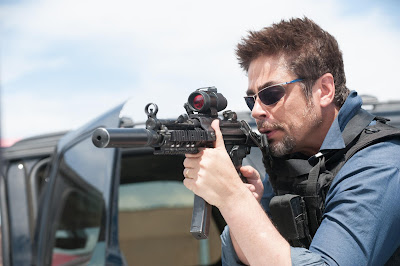 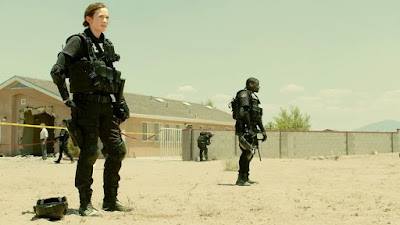 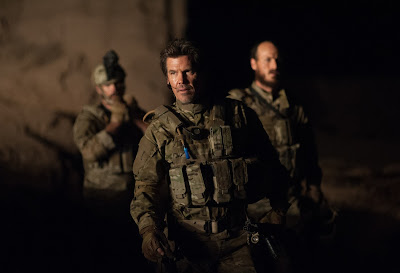 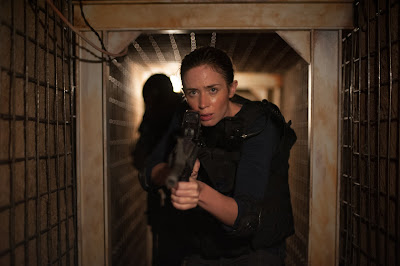 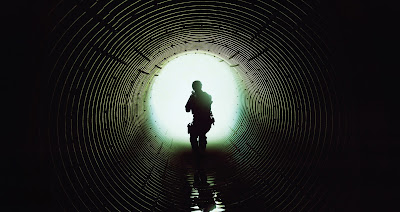 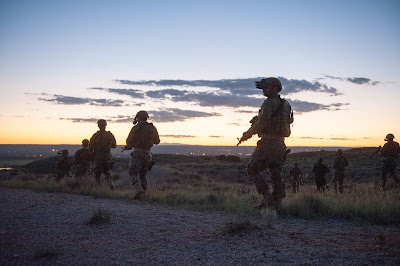 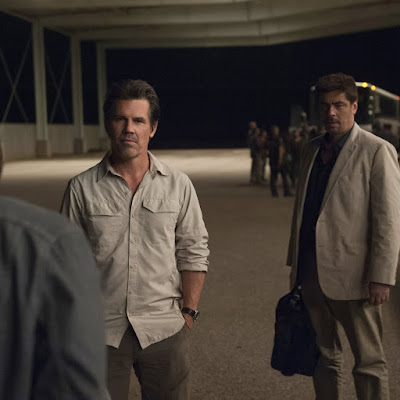 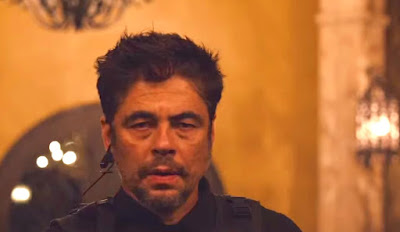 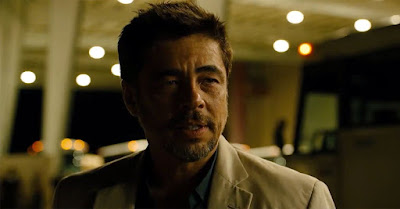 In the manner of Gerardo Naranjo’s Miss Bala (2011), Kathryn Bigelow’s Zero Dark Thirty (2012), and Amat Escalante’s Heli (2013), Canadian filmmaker Denis Villeneuve has made a Hollywood action thriller that brings the audience directly into the Mexican drug wars, giving them a front row seat exposing the nefarious practices taking place by our own government in the name of stamping out criminal activities.  While the title of the film is Mexican slang for the word “hitman,” the film paints a dark picture into the skewed moral lines that exist in combatting drug wars, where it’s often hard to tell the difference between the good guys and the bad guys, as both are operating in the same toxic cesspool of greed, corruption, murder, and power, as all sides are vying to control the $19 to $29 billion dollars that the Mexican drug cartels receive annually from U.S. drug sales.  While this is essentially a high powered, adrenaline-laced film from start to finish, we are drawn into the action in a riveting opening, seen through the eyes of Kate Macy (Emily Blunt), an overly conscientious FBI agent specializing in kidnapping cases leading a SWAT team to an Arizona border town home where they believe people are being hidden.  In the process of discovering 40 dead bodies stored vertically in the walls wrapped in plastic body bogs, a planted explosive device wipes out part of the team.  After this harrowing experience, Kate is called into a meeting where a special task force of elite agents is considering their next move, where she is told the house is owned by a local cartel boss Manuel Diaz (Bernardo P. Saracino) before being asked to volunteer as an operative on special assignment headed by Matt Graver (Josh Brolin) in the Defense Department, even though she has no real drug enforcement experience.  Their goal is to track down the head of a notorious drug cartel, Fausto Alarcon (Julio Cesar Cedillo), kidnapping one of Diaz’s chief operatives named Guillermo (Edgar Arreola) in an attempt to flush Fausto out of hiding.  While purportedly flying to El Paso, Texas, their real destination is Ciudad Juárez, Mexico, where an entirely different set of rules operate, as this has been the site of a long and bloody battleground over contested gang turf.  Mexican drug cartels control 90% of the cocaine entering the United States, where the Ciudad Juárez cartel had control over prime drug trafficking routes, but they have been under attack from the more powerful Sinaloa Cartel, headed by the recently escaped most-wanted prisoner, Joaquin “El Chapo” Guzman, whose estimated net worth is in the billions, infiltrating the police, government and the military, where they are the largest known mafia organization in the world.  Stepping into the middle of this dispute is like walking through the gates of Hell, as over 140,000 people have been killed in the Mexican drug wars since 2006, with nearly 30,000 people still missing.  Because it happens on the other side of the border, it may as well be invisible to most Americans, but life in Mexico can be a traumatizing experience.

The director uses a blisteringly intense, cinéma vérité style to express just how brutally violent the world in Mexico has become, including the sight of hacked-off remains of dead bodies hanging from a bridge while Kate rides in a caravan of giant SUV’s and machine-gun implanted vans driving through the city streets of Juárez past astonished bystanders, where a firefight may erupt at any second, as they are being tailed by other suspicious vehicles.  Despite this military presence, they are able to surprise Guillermo, literally kidnapping him from his home, then making a mad dash to the border where traffic is backed up due to a car breakdown up ahead, leaving cars in a standstill.  In this tense atmosphere, despite the wall-to-wall presence of civilians, their team must identify would-be assassins in the vicinity and strike before being struck, turning into a bloodbath taking place in a sea of innocent bystanders.  Horrified by what she witnesses, they are quickly whisked away to safety carrying their prisoner in tow to the security of a nearby army facility.  Graver and his all-male team leave Kate out of the information trail, where part of the intentional thrust of the film is that it happens so fast and in such a confusing manner that it’s hard to follow just what’s taking place, where Kate’s mind is stunned by a flurry of improvisational fast action, where her confusion is translated to the audience.  It’s here that she meets Benicio del Toro as Alejandro, a native Colombian and former Mexican prosecutor whose presence is shrouded in mystery, though his physical hand shakes with the appearance of a man who has survived torture.  Appropriately, he is the man who interrogates Guillermo, bringing in a giant water jug, where in pure Hitchcockian fashion the camera focuses upon a drain on the floor, suggesting either waterboarding and/or an outlet for the stream of blood.  Torture is alive and well in the drug wars, where the film provides a searing realism that matches Erick Zonca’s JULIA (2008), especially the back alleys of seedy, gang-infested Mexican neighborhoods where danger lurks around every corner.  Into this swath of unending violence, another smaller story is being told, representing the average Mexican family, where a young Mexican kid is always waiting for his perpetually oversleeping Dad (he’s a cop that works nights) to take him to play soccer, where all he’s really asking for is a hint of normalcy.  This contrasts with the blurred reality of Kate, who is told by Alejandro that “Nothing will make sense to your American ears.  By the end, you will understand,” a clear stand-in for the American public that hasn’t a clue what’s going on, where part of the problem is seeing things exclusively through American eyes, which has a tendency to reveal only what they pick and choose while leaving out the rest.  This trip into Juárez is a surreal reminder of moral ambiguity, like the “heart of darkness” descent up river in Coppola’s APOCALYPSE NOW (1979), exposing America’s venture into Cambodia during the Vietnam era, a military excursion shrouded in secrecy taking place simultaneous to a President and Secretary of State repeatedly informing the American public and the world that Cambodia was strictly off limits.

Kate is stunned by the expansion of American authority into Mexico, but receives word from her superiors that for this operation, the rules of engagement have expanded.  After learning the whereabouts of Diaz’s hideout from secret torture sessions, Graver’s team also rounds up Mexican migrants attempting to cross the border, checking for the presence of drug tunnels along the route, zeroing in on a specific location.  At the same time they freeze Diaz’s American bank accounts, where Kate thinks they have sufficient information to prosecute Diaz, but Graver isn’t interested, insisting it’s his boss they’re after.  By being left out of the specifics of each plan, where no one is what they appear to be, all carrying a hidden agenda, while Kate is simply going along for the ride, where the entire mission may have originally been intended to recruit her, but she’s the only one in the entire film that has any sense of a moral compass.  Everyone else is totally out of bounds, where they recognize her hesitation and how green she is immediately.  It’s not hard for her to realize she’s only in the operation because she’s working “within the law,” as a cover for their cowboy recklessness, somehow making it all legal.  While she has an opportunity to simply get out, an awkward moment where Alejandro actually has her back, literally saving her life, she feels compelled to find out where it all leads, as these guys are closer to the heads of the cartels than she’s ever been.  Using infra-red photography, a special ops night mission targets the American entrance of the tunnel, located in the middle of an endless desert expanse, where the look of the film recalls the mission to assassinate Osama bin Laden in Zero Dark Thirty, both accentuating the military aspect of the raid where these guys mean business, specializing in getting in and out while completing their mission as quickly as possible.  While gunfire is heard in all directions, she gets separated from the team, exiting from one of the many tunnels where she sees something she’s not supposed to see, as it appears Alejandro is about to shoot an unarmed Mexican cop named Silvio (Maximiliano Hernández, the father of the little kid) whose police car is filled to the gills with drugs and refers to Alejandro as “Medellín,” a hint as to his true connections.  The film belongs to del Toro by the end of the picture, where his sinister presence dominates the screen, crossing the line between both hero and villain, yet his intentions are lethal, reminiscent of Max von Sydow’s coolly precise assassin character in THREE DAYS OF THE CONDOR (1975), a man who operates outside all moral laws.  Whether this is all a CIA operation or not, one would think the war on drugs has failed, as America remains the largest consumer of the illegal products, so it’s perfectly conceivable that the U.S. government has no conceivable plan to stop the flow of drugs into this country, as the business is simply too lucrative.  While it’s treading on murky waters, what’s clear is the war on drugs has brought the cartel wars into our own country, where it’s not about stopping the flow of drugs but instead trying to control and/or influence the powers running the business operation.  It’s a chilling ending, where a fatherless kid makes his way to the soccer game, where the everpresent sound of gunfire can be heard from the surrounding neighborhoods, an everyday fact of life that will remain with him always.  The cinematography by Roger Deakins is stellar, while the dark musical score by Icelandic composer Jóhann Jóhannsson adds a pulsating presence of gloom.
Posted by Robert Kennedy at 12:01 AM