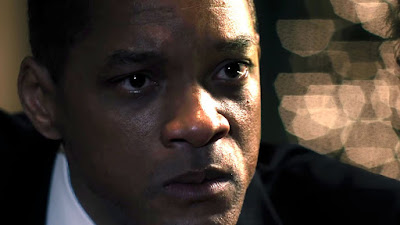 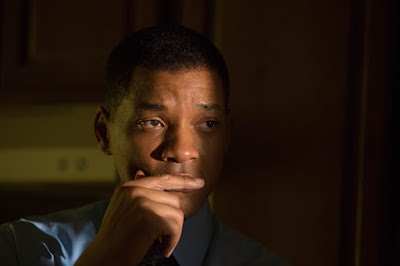 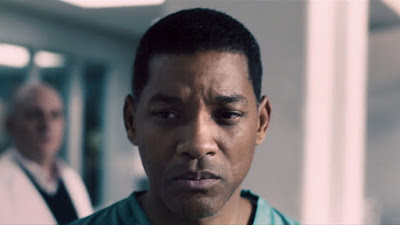 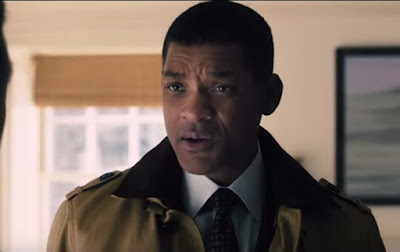 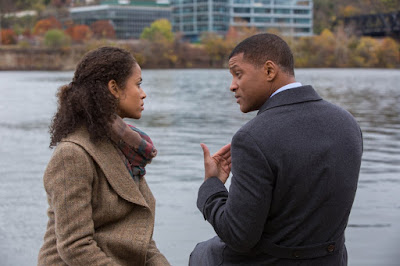 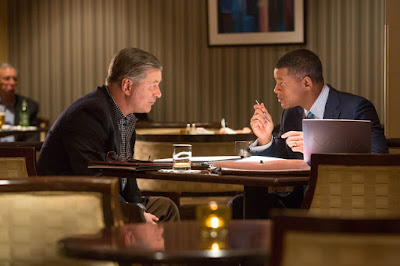 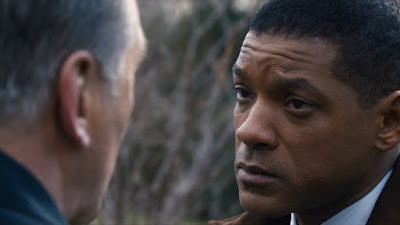 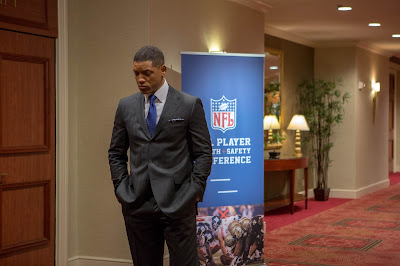 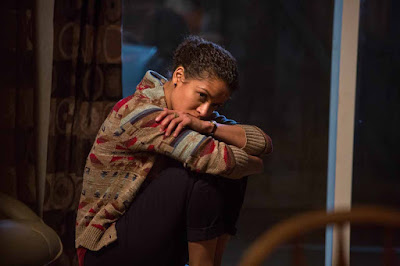 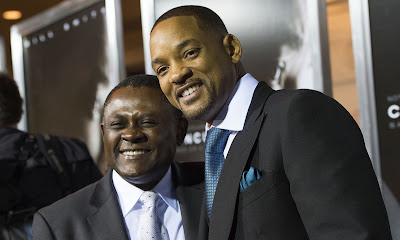 Dr. Bennet Omalu (left) and actor Will Smith who portrays him in the movie Concussion

A tragic and ultimately heartbreaking story about the profound effects of football-related brain trauma, where professional athletes are reduced to inexplicable shells of themselves, literally becoming different people inhabiting their same bodies with no control over their actions, succumbed by constant headaches, psychological torment and such mind-numbing pain that they can no longer sleep or think straight, many resorting to suicide as the only way out.  While this is in every sense a Hollywood movie, complete with an accompanying inner story romance, it’s tone throughout is downbeat and somber, reflective of the post 9/11 era in which it is set, basically following the life of Dr. Bennet Omalu, a Nigerian-born pathologist and forensic neuropathologist whose specialty is the study of the human brain, who at the time was assigned to the Allegheny County coroner’s office in Pittsburgh where his job was examining the dead bodies in the morgue.  However, before we meet him, there’s a fascinating introduction where David Morse plays Hall of Famer “Iron” Mike Webster in his final days, arguably the greatest center in the history of professional football, the man who anchored the offensive line in a spectacular run of winning 4 Super Bowls for the Pittsburgh Steelers in the 1970’s, but he’s seen homeless, psychologically damaged, unintelligible, destitute, and literally out of his mind, living in an old beat-up truck on the outskirts of a vacant lot next to a steel plant.  The extent of his fall from grace is astonishing to anyone that knew him, as his anguishing pain was constant and insufferable, subjecting himself to relentless electric shock from a Taser gun, rendering himself unconscious just to fall asleep, and eventually dying of a reported heart attack at the age of 50.  This brief interlude sets the tone for the film, horrifying to say the least from a Hall of Fame legend, unimaginable, and equally unforgettable.

Something of a cross between the hidden secrets of the tobacco industry in Michael Mann’s THE INSIDER (1999) and similar secrets hidden by the nuclear power industry in Mike Nichols’ SILKWOOD (1983), complete with unexplained conspiracy theories that are left dangling in the wind, Will Smith (with an African accent) stars as a forensic neuropathologist who discovers the first case of CTE (chronic traumatic encephalopathy), a football-related brain trauma, and challenges the NFL in his battle to reveal the truth, where he is fought at every step by a multi-billion dollar industry that prefers to cover up any scientific knowledge that would have a significant impact on the game.   While it’s a case of dollars and cents, where the league is protecting their investment into the product of football, the filmmaker himself is an investigative journalist for the New York Times magazine, Atlantic Monthly, The New Yorker and others, covering the conflicts in Rwanda, Kosovo, and Afghanistan/Pakistan after 9/11.  The film is based on an extensive magazine piece, Game Brain - GQ.com, written by Jeanne Marie Laskas from GQ magazine, September 14, 2009, now enlarged into a book entitled Concussion, where she documents what happened to Mike Webster and several other former NFL football players, including Steelers offensive lineman Justin Strzelcyzk, who died in a head-on collision after leading police on a high speed car chase, and yet another Steelers offensive lineman Terry Long who died from drinking antifreeze, each a spiraling tragedy of epic proportions.  It was Dr. Omalu who examined each of their brains after death, as the diagnosis can only be determined by an autopsy of the brain, so it’s only after the fact that the extent of this deteriorating brain condition is realized, that repeated blows to the head can have drastic effects to the brain, associated with depression, early-onset dementia, aggressive behavior and suicide.  Over time, as more NFL players die, the results will be even more pervasive as other names are added to the list, such as Andre Waters, who had a reputation as one of the NFL’s hardest hitting defenders as a safety from the Philadelphia Eagles defensive backfield, but eventually took his own life with a gunshot to the head, or Dave Duerson, another heavy hitting safety from the Chicago Bears who died of a self-inflicted gunshot to the chest.

While the results are devastating, the film itself gets carried away with a Hollywood good and evil scenario, seen almost exclusively through Dr. Omalu’s point of view, with Will Smith playing a Nigerian émigré who dreamed of coming to America as a young boy, who desperately wants to be accepted in America, a tireless worker who holds eight advanced degrees and board certifications, whose hours of work are so extensive that he has little time for anything else, though he’s a dedicated Catholic, where his church priest assigns him the role of shepherding a newly arrived medical student from Kenya, Gugu Mbatha-Raw from Beyond the Lights (2014) as Prema, where his early success parallels their growing love affair, ultimately getting engaged and married, becoming his most steadfast supporter.  Like Sidney Poitier in GUESS WHO’S COMING TO DINNER (1967), their moral character has to be above reproach, where Hollywood presents them as saints, where their level of decency is stupifying, though it’s clear one of the reasons his research is initially received with such skepticism is that he’s an African without American citizenship, so it’s easy to belittle his findings.  In the coroner’s office, his supervisor is so offended by the invasive procedures performed on Pittsburgh Steeler greats after death that he refuses to authorize them, forcing the doctor to pay for more scientific results himself, which includes specialized tissue analysis outside the norm, as the brain shows no signs of damage during an autopsy.   This thread of xenophobia and American inequality interestingly runs throughout this picture, as Omalu’s naiveté is a stark contrast to the cynicism and outright racism that greets him, where even after publishing his findings in a medical journal, he is met with a formidable amount of character assassination and utter disdain, as the NFL initially smears his medical findings.  The lone ally in the room is the man that runs the coroner’s office, Cyril Wecht (Albert Brooks), a noted forensic consultant in legal cases, and the mentor who trained Omalu as a forensic pathologist, and through him Omalu meets Dr. Julian Bailes (Alec Baldwin), a former team doctor for the Pittsburgh Steelers, one of the first NFL representatives to believe his medical findings, offering credibility from someone within the sport, becoming a major turning point in Omalu’s effort to get the NFL, and the world, to notice.

While it is portrayed as a David versus Goliath confrontation, where a $12 billion dollar giant corporation with unlimited monetary resources tries to suppress Omalu’s findings, where the NFL won’t even allow him in the room to discuss the matter, turning instead to Dr. Baines “as one of their own,” where the initial findings are met with open suspicion, anger, and even intimidation, which leads to the most incredulous Hollywood insinuations, easily the least effective part of the film, becoming a study of growing paranoia as there is some suggestion that the NFL uses its influence to call in the FBI to raid Dr. Wecht’s office, going through his files, removing sensitive equipment, where Omalu concludes, “You are attacking him to get to me!”  The problem is the FBI did, in fact, raid Wecht’s office, but it came three months “before” Omalu published any of his research, so this is the kind of movie hysteria that diminishes Hollywood’s own influence and credibility, resorting to foolishness and utter nonsense instead of presenting what actually happened, which undermines the effectiveness of the picture.  Even worse, there are insinuations that Omalu’s pregnant wife is being followed, as we see her being tailed by an anonymous car, amping up the fear factor as she attempts to get away, losing her unborn baby in the process.  While there is an exaggerated portrayal of a lurking presence of evil, suggesting the NFL is behind it all, this is Hollywood overkill.  The blatant NFL crimes are obvious enough, as they were slow to recognize how seriously concussions and repeated blows to the head can effect one’s brain, where initially as an industry they lied and covered up.  Despite the absurd doublespeak of NFL commissioner Roger Goodell as he speaks under oath before an investigatory Congressional committee studying how concussions may impact the game, nine years passed after Omalu’s initial publishing before the NFL recognized the merit of his findings.  There are still any number of football spokespersons that continue to underestimate the impact, but it’s hard to refute the evidence that the game of football has on the human brain, even at the sub-concussion level, though at least the league is much more focused on concussion protocol (Concussion - NFL Players Association) in today’s game, as are all sports in general, which includes an independent evaluation from doctors who are not connected to the league.  While high-priced quarterbacks that earn big salaries can afford to voluntarily remove themselves from the game after taking big hits, which is the ideal goal of today’s game, many of the more borderline players can’t, as their earnings are far more suspect, so they’re not so willing to voluntarily pull themselves out of a game.  As a result, there are official spotters (ATC Spotters | NFL Football Operations) on the sidelines of today’s NFL games whose job is to observe player behavior and pull out players suspected of taking voracious hits to the head and subjecting them to a concussion protocol.  While the system is imperfect, where they obviously miss incidents observing from the press box, at least the league’s rules are developing with more interest in player safety.
Posted by Robert Kennedy at 12:10 AM