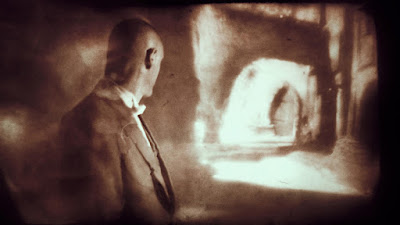 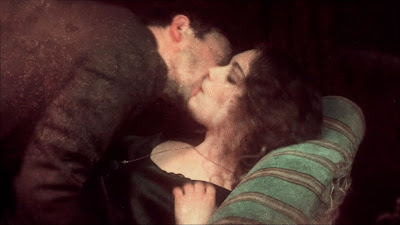 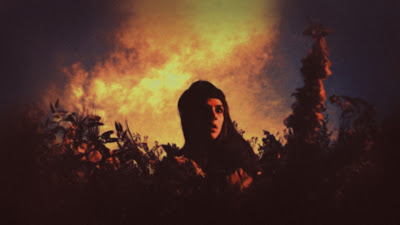 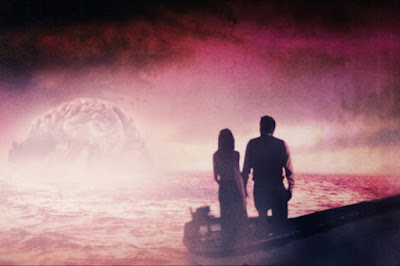 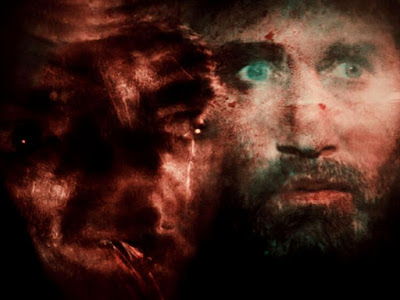 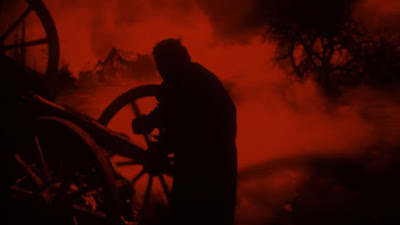 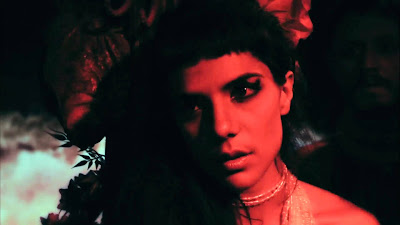 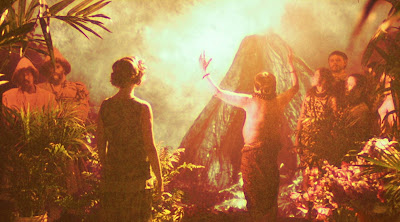 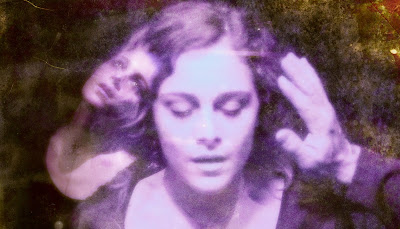 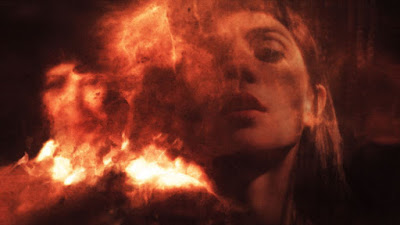 When they were filled,
he said unto his disciples,
Gather up the fragments that remain,
that nothing be lost.
—John 6:12

Guy Maddin has always had a demented streak in his cinema vocabulary, where he continues to make films like no one else, a complete original, where the entirety of his films seem to take place in the realms of the imagination, often without any rhyme or reason, where he doesn’t really bother with a comprehensible narrative or much of an explanation, as instead it’s something of a visual bonanza.  Drawn to the weird and continually eccentric, the man has made a living reviving the Silent era in a modern subtext, where his films have only grown even more audaciously experimental, where the man always seems to be tainted by madness in one form or another.  Highly exaggerated to the point of absurd only begins to describe his films, where this one seems to thrive on the infinite hidden chambers involved in a really complicated series of flashbacks, much like the heralded fantasy piece THE SARAGOSSA MANUSCRIPT (1965), where flashbacks implode into second and third level flashbacks, becoming an absurd commentary on the lost art of storytelling, where every story is a convoluted and fantastical adventure tale that seems pulled out of the delirium that comprises the director’s own crazed dreamlife.  Just reading the surreal storylines of Maddin’s films are an experience in itself, as no one writes more comically hilarious plot twists, where every film plays out like a midnight cult experience.

Here’s what happens in the first thirty minutes of Guy Maddin and Evan Johnson’s The Forbidden Room:

A grey-haired man in a bathrobe discourses on the history of baths (“In the middle ages, they were called stews, because you had to be stewed to have one”), then proceeds to give us instructions on how to take one. (“Carefully insert your big toe in the water. This will tell you if it’s too hot or too cold.”)

As the camera closes in on the bubbles in the bath, we see a submarine, stranded deep underwater (“Forty fathoms deep, entombed in silence, hidden from God”) with four crew members and no captain. The sailors desperately try to extend their oxygen by breathing from the air pockets in the batter of their flapjacks. Then, they cry and argue over a case of depressurized explosive jelly which will ignite if they ascend to the surface.

Suddenly, a “never-before-seen woodsman” materializes in their submarine, covered in fresh water. He has no idea how he got there. Last thing he remembers, he was in a dark forest in “the blackest part of Schleswig-Holstein.” There, he and three other woodsmen — aspiring lumberjacks — were preparing to save a woman they all collectively loved, named Margot, from the clutches of a woodland gang known as the Red Wolves.

In his flashback, the woodsman infiltrates the Red Wolves, and pretends to want to join them. Their leader, “The Wolf,” demands he complete four trials as follows: Snapping fingers, offal piling, stone weighing, and “bladder slapping.” The woodsman triumphs at all four. But then Margot herself offers him four, more difficult trials. But before he can do them, everybody goes to sleep.

As Margot gyrates among a pile of slumbering Red Wolves, she “escapes… through the doorway of a dream” and finds herself working as a flowergirl in an elegant nightclub, where the men lounge in tuxes and women do exotic, native dances on stage. Margot herself sings a song about the jungle, but has no idea why she knows it. She doesn’t even know who she is. A man named Pancho yells at her for making him wait so long.

Then, an indistinct figure, made up of a rapidly flickering assortment of faces (he’s unseen and unnamed — there’s a blast of static on the soundtrack whenever anyone utters his name), gets on stage to sing about his obsession with butts. As he sings, we see Udo Kier walk the streets lusting after women’s derrieres — whenever he does so, there’s a brief flash of Geraldine Chaplin, as his “Master Passion,” screaming and whipping at him. As the song continues, he makes repeated visits to the doctor to have pieces of his brain removed (“A little bit off the top! A little bit off the top!”) in an effort to cure his insatiable longing for ass.

That’s minute 28, by my count. And it just gets weirder from there.

It should be noted that Guy Maddin is not for everyone, as his films defy comprehension, where logic is left at the theater door, and this one is no exception, where it’s easy to get lost in the dizzying phantasmagoria of what’s happening, yet the bold German Expressionist imagery literally jumps off the screen, calling attention to itself, where it’s hard not to be at least a little impressed by the atmospheric density of what we see, as a B-movie look has never been presented in this way, with the most remarkable production design imaginable.  The problem with Maddin’s films is that so much is compacted into every single frame that it’s impossible not to miss huge chunks of narrative and much of the meticulous artistic design, as it can literally be overwhelming, especially when presented at breakneck speed, but nonetheless, he’s one of the master craftsmen of the business, where every precious image is lovingly composed.  It might be a bit mindblowing, as the brain has a hard time keeping up with the hallucinogenic slipstream, where confusion is part of the game, but pick up whatever you can, as it’s an extraordinary example of what an inventive director can do with cinematic expression.   The film is much longer than usual, more than an hour longer than COWARDS BEND AT THE KNEE (2003), for instance, where there are multiple instances where we have the impression the film is ending, and the length plays into the mentally exhausting experience.  Additionally, Maddin is working for the first time with a co-director, Evan Johnson, a former student who is also credited as a co-writer and visual effects supervisor.  Simultaneous to the release of this film, they also designed a web project resurrecting plots from lost films, most from the first three decades of cinema, and then reenacting them, Seances - Guy Maddin, also see Seances, though the films on the Internet will not contain any of the same scenes as the film, allowing for a completely unique experience.  Yet according to the press release, “Allegedly based on lost films…,” the concept is similar, where literally every idea came from a lost film, where sometimes they recreated an actual story while other times all they had was a title where they had to invent a story, all given the look of old, faded, and partially destroyed film stock, much like Bill Morrison’s documentary DECASIA (2002), which was actually made entirely with old, decaying, nitrate-based, Silent era archival footage that was otherwise pulled out of the scrap heap, then reshaped into an avant-garde tapestry, where Morrison’s intent (which may as well be Maddin’s) was to remind us of “the many dreams we forget upon waking.”

Completed in 31 days, shooting one film per day, what Maddin and Johnson have actually created is a surreal, stream-of-conscious experience, where these lost films have effectively been unseen for decades, while this film reconnects them to the living, not as a whole, but more often moving from one to another in midstream, where scenes from different films intersect, blending them together in a colliding story of interconnected images.  Actually this sounds very much like the cut-up writing style of William S. Burroughs as he began to approach Naked Lunch, a drug-tinged adventure where the chapters were intended to be read in any order.  This ability to cleverly rearrange the text randomly can be traced back to the Dadaists of the 1920’s, which was preceded by Picasso and Cubism, but these techniques were not really utilized by the silent film directors.  Nearly one-hundred years later, Maddin is fascinated by the idea of reviving long unseen footage, restaging them in the present, using current production techniques and modern actors, then stringing them together as a kind of fever dream, while what inspired Maddin was the idea that the stories could be reassembled in any particular order.  In this way the old becomes the new, as the past is continually feeding into the present, which has been Maddin’s standard practice throughout his career.  Very much like these paintings, books, and other works of art, where it’s hard to tell what they are about, Maddin’s reconstructed film moves so quickly from one idea to the next that certainly part of the fascination is not what’s happening, but the way it looks and feels, as there’s an extraordinary art design associated with the film construction, where at his disposal is the entire history of cinema, where he can use hilarious intertitles, jump cuts, exaggerated melodrama with actors playing multiple roles, chase scenes, unrivaled moments of dreaded suspense, lyrical romance shots, action adventure, dance, horror, musicals, dreamlike interludes, and even the documentary genre and simply move effortlessly between them any way he pleases.  Of course, the flashback device is used almost as a standing joke in transitioning from one scene to the next.  What the film doesn’t do, unfortunately, as we have moved into the automated, digital era (it’s our own fault!), is give instructions to the film projector to assemble the reels in any particular order, so every perspective audience would conceivably enjoy a completely different film experience.  While this might confound the film critics, all of whom would be dumbfounded when comparing notes, it might also generate a stampede for multiple viewings, just to play with all the possibilities.  It’s like a new toy at Christmas that every child looks forward to playing with before eventually growing tired and finding something else to play with.  It’s not inventing the wheel, but it’s as novel an experience as you’re going to have in a movie theater this year.
Posted by Robert Kennedy at 12:01 AM