A Moon of Nickel and Ice 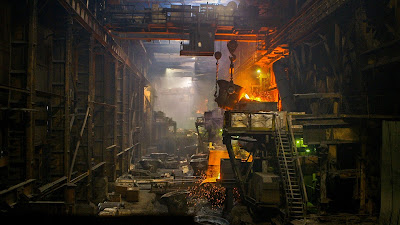 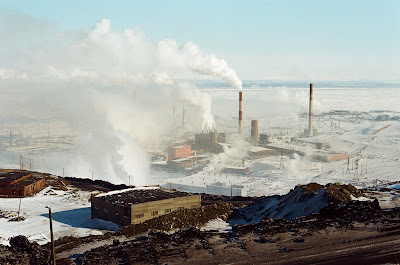 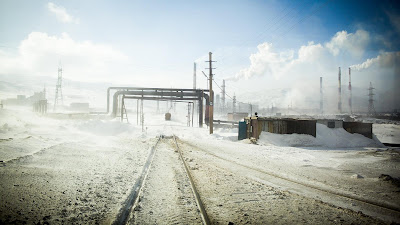 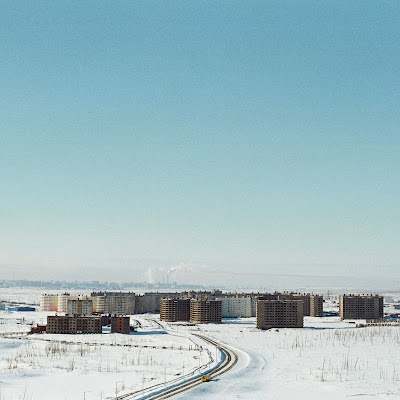 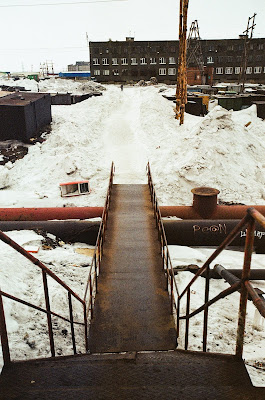 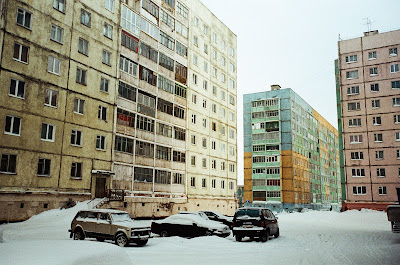 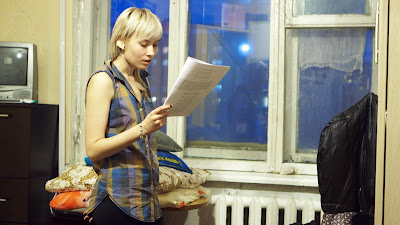 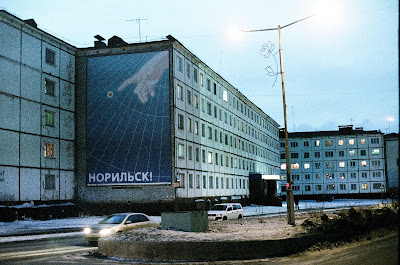 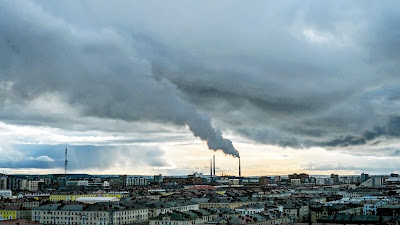 Winters are long and cold in Norilsk, Russia, with an average temperature of minus 31 degrees Celsius (minus 23 degrees F) in January. Days are characterized by frost, coupled with strong and violent winds. The cold period extends for about 280 days per year, with more than 130 days of snowstorms.
—The Weather Channel

From Québécois filmmaker François Jacob, totally familiar with living in the frozen north of Canada, he takes us on a journey to an unfathomable region of the earth, so far away from civilization that it’s only approachable by airplane, located 250 miles north of the Arctic Circle, where you’ll find Norilsk, Siberia, the northernmost city on earth with a population of more than 100,000 residents, with an average annual temperature of 14 degrees, and the distance to Krasnoyarsk, the capital of the region, is 1,500 km (932 miles), while the distance to the North Pole – 2,400 km (1491 miles).  What makes this area notable?  It holds the world’s largest deposits of nickel and palladium, with 17% and 41% of the world production respectively, while factory and mining operations continue non-stop 24 hrs/day, with a schedule of 3 work days followed by a day off.  But the underlying story is the city history, as it was built by Gulag prison camps dating back to 1935 that lasted until Stalin’s death in 1953, though the prisons were also filled with regular criminals as well, which didn’t shut down until several years later.  All the more remarkable is that Gulag prisoners were also the architects that built the town, constructed in 1940, using cement block buildings in the style of Stalin architecture.  Without modern machinery and equipment, the brutal work was done by hand, brick by brick.  A second construction phase began in 1960 as part of the widespread USSR system of constructing buildings with pre-built panels, though they ran out of money and were never completed, but remain standing, a forgotten ghost town still part of the frozen landscape, relics from another era.  Currently, two oligarchs own the Norilsk Nickel Company, which is highly profitable, bringing in 2% of the Russian GDP, but the town is also listed among the top ten most polluted cities in the world today, annually spewing more than two million tons of pollutant gas (mainly sulphur dioxide, but also nitrogen oxides, carbon and phenols) into the atmosphere, where life expectancy is ten years less than the rest of Russia, which is already among the lowest anywhere in the world.  The risk of cancer is twice as high, including blood and skin disorders, while lung diseases are widespread, where the air quality is responsible for 37% of child deaths and 21% of adult deaths.  One could safely argue that Norilsk is the ugliest and the most inhospitable city anywhere on earth, yet ironically, on top of one of the tallest buildings is an electronic display on automatic repeat that reads “Norilsk Nickel:  A World of Opportunities!”

Resembling a science fiction landscape, the city, even today, remains a closed city (since 2001), as you need permits just to visit, with the filmmakers spending 5 years of grant writing, research, even learning the language while attempting to navigate the Russian bureaucracy, as all outsiders are brought in exclusively to work for the company.  While the place is covered in ice and snow for 8 or 9 months of the year, without a single living tree within 30 miles, so most of the time is spent indoors, including all children activities, where huge buildings allow them to enjoy typical outdoor activities like cycling and running in an indoor environment.  From December to January, there are six weeks when they are plunged into total darkness, with no sun whatsoever, causing any number of ailments, most stemming from depression, but also including insomnia, described as “the polar night syndrome.”  During the coldest periods, a convoy of 15 to 20 buses transport workers around three times a day, so if one bus breaks down, the passengers can be evacuated to another bus.  Too much time, however, spent living in confined spaces leads to claustrophobia, where the Russian antidote appears to be drinking heavily among friends, the favorite past time of most adult men.  Citizens here brag about their neighborly hospitality, claiming no child goes hungry, that they all look after one another and help in times of need, with drinking buddies claiming these are the best friends in the world, seen taking a midnight dip in the icy waters, with steam coming off their bodies as they exit.  Even in the bleakest environment, human friendship and companionship becomes paramount, as difficulties seem to unite people, showing how humans adapt and survive.  But it’s hard to escape the history of this town.  During the Stalin purges, some of the brightest minds were sent here as political prisoners, as many as 650,000, forced to work in the freezing cold under the most inhumane conditions imaginable, actually constructing the mines, factories, and buildings that still exist today, where 250,000 died prematurely from starvation and untreated sickness associated with slave labor.  Nickel ore is smelted on site at Norilsk, one of the most toxic pollutants, causing acid rain and smog, where a dark cloud constantly hovers over this city which is constantly spewing gaseous soot into the air, where even today the city is denounced by environmentalists as a major environmental disaster.  While in the West, we are free to mention the dark history and the toxic consequences of working there, but in Russia this information remains suppressed, as the Nickel company continues to recruit potential workers from former Soviet countries like Azerbaijan, Kazakhstan and Turkmenistan, so the advertising accentuates the financial rewards, including early retirement by age 45, but omits the hazards, though inhabitants living in Norilsk certainly understand the risks, that the company literally works you to death.

There is some controversy among the residents of Norilsk about how to view their own history, whether to honor those that built this town and consider them heroes, or whether to remain silent about the uglier side of the Stalinist Gulags, preferring a sanitized account of history, which seems to be the government’s position, thinking it’s enough to mention what happened, but don’t dwell upon it.  Be done with it and move on.  There is a contingency that are sons and daughters of the Gulag prisoners that want to honor their ancestors, as they were committed Bolsheviks when communism was still considered a revolutionary worker’s party, where a giant statue of Lenin remains affixed to the town square.  Some are in disbelief that Russia lost so many lives in WWII to rid the world of fascism, yet it seems to be on the rise again, even in their own country, while the workers we see continue to vote a straight party line ticket, as communism represents their social values.  One of the leading advocates is highly outspoken, “Norilsk Nickel has erased its brutal history from the collective memory:  the exploitation of free labor.  They replaced the troubling slave history with myths of the Communist Youth and stories about eager newcomers.”  While once condemning Stalin, more recently Putin has embraced the former leader, including his dictatorial style, where a recent Russian poll by the Levada Center, an independent, non-governmental research organization, found Stalin to be more popular with Russians today than Putin, as after all, Stalin won the war, Stalin More Popular Than Putin, Russians Say - Newsweek.  With that strongman ideology comes a crackdown on free speech.  When a group attempted to raise a flag in honor of the town’s founders, commemorating a famous 1953 Gulag uprising, they were promptly arrested.  There is a thriving theater company that puts on dramatic performances, even in the dead of winter, claiming residents fully support them and come out, even during the worst blizzards.  What we never see are hockey players or figure skaters on ice rinks, where you’d think in this city they might thrive, but the cost of maintaining an “artificial” ice surface may seem superfluous in this ice city, where the outdoor conditions are simply too brutal.  As the film moves to questioning the ambitions of the city’s youth, almost unanimously these kids want out, as no one wants to stay here, believing it is a death trap.  Most envision careers in St. Petersburg, including a young girl who wrote her first novel at age 14, causing considerable alarm to local residents due to the adult content, believing she was too young to understand these matters. “Here it feels like living on the moon,” she says, describing life in Norilsk as living in an “endless tunnel.”  Nonetheless, she is bright and ambitious, where a film crew actually follows her as she travels to St. Petersburg and begins a new life, relieved to finally find herself in a cosmopolitan city teeming with life, with Norilsk, already a distant memory, viewed in stark contrast.
Posted by Robert Kennedy at 12:07 AM