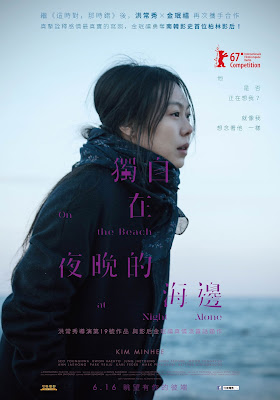 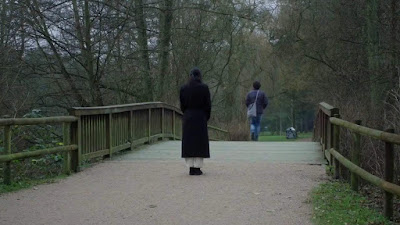 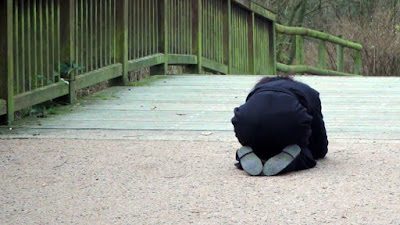 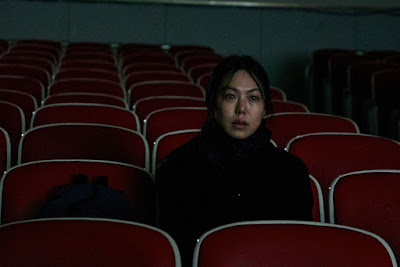 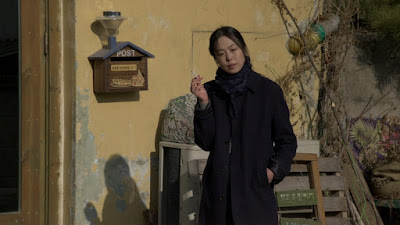 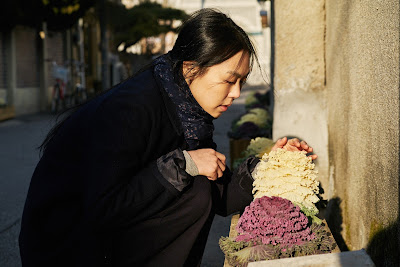 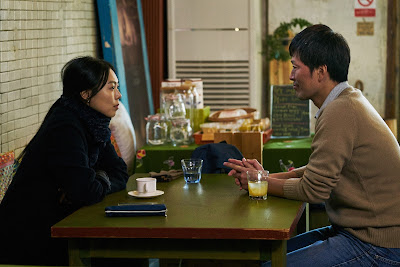 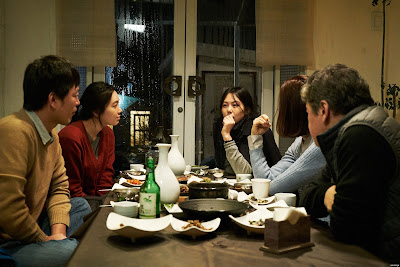 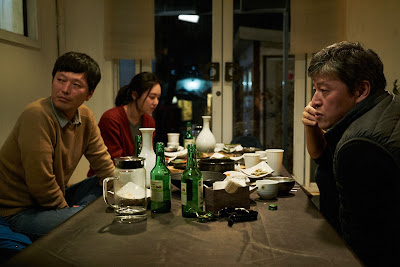 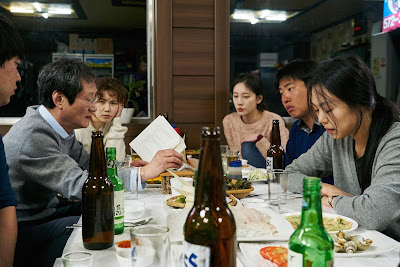 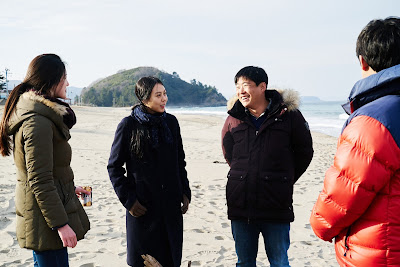 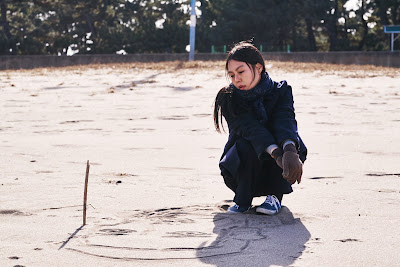 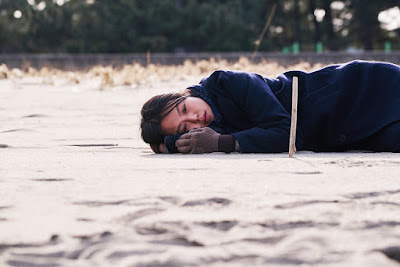 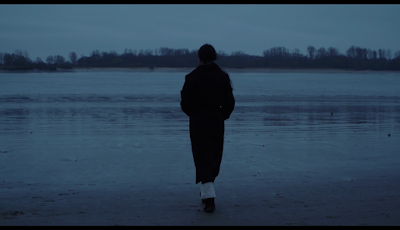 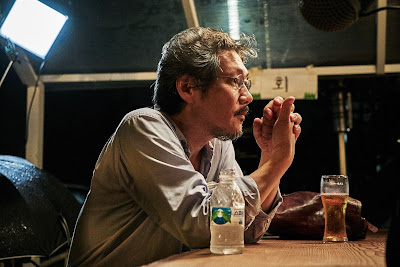 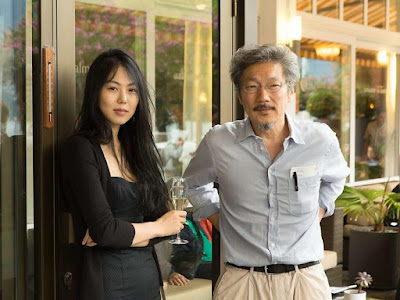 On the beach at night alone,
As the old mother sways her to and fro singing her husky song,
As I watch the bright stars shining, I think a thought of the clef of the universes and of the future.

—Walt Whitman, brief excerpt from Leaves of Grass, 1855, On the Beach at Night Alone by Walt Whitman | Poetry Foundation

While the entire film community at large is in near unanimous approval of this film, praising it to the hilt, with some even claiming it may be the director’s best film, don’t believe them.  Having now seen eleven of this director’s films, this is the first real misfire, becoming the most superficial of all his films, suggesting he’s lost some of his perspective, at least for this film.  While overtly autobiographical, though hardly identical with reality, this film utilizes actress Kim Min-hee to the point of over-saturation in an overtly transparent attempt to regain her stature, which apparently worked, winning the Best Actress award at the Berlin Film Festival, the first award ever handed out to a female actress in a Hong Sang-soo film, as she is in nearly every shot of the film, with all the attention of the script paid to her throughout.  Going through recognizably similar personal travails that she’s had to endure in real life, caught up in a scandalous adultery affair with this director, who left his wife to be with Kim, which left a stain on her career, though here Hong continually puts her up on a pedestal, viewed as an acclaimed celebrity, where she’s grown used to hearing people sing her praises and literally worship the ground she walks on, as one after another genuflects at the altar of this actress.  One quickly grows tired of every secondary character in the film thinking exclusively of her, where the director, apparently, expects viewers to adore her as he does, which feels like manipulative overkill, actually cheapening the film and dulling the senses.  In true Hong fashion, the film is well-crafted, told in two parts, where each mirrors the other, but is discernibly thin, mostly revealing what we already know, offering precious little insight, where they come across as two people who think only of themselves.  If there is one common feeling that pervades throughout the film, it is overpraise, and neither the director nor his lead actress actually come to terms with this inflated view of themselves, as instead it’s written into the narrative.  People that place themselves so far above others aren’t really that interesting, as they deludedly view themselves in a substantially different manner than anyone else, thinking they and they alone are worth thinking and talking about, becoming overly egocentric, actually minimizing the influence of others, or ignoring them altogether.  As if he’s above the fray, Hong misses an opportunity for true self-awareness, which have been a mainstay of his films since the beginning, making this feel more like a travesty.

A wintry air provides the natural setting of the latest Hong film, opening with a sublime and distinctly heavenly passage (the opening phrase) from the Adagio movement (17:28) of one of Schubert’s breathtakingly beautiful final works, Schubert / Rostropovich / Taneyev Quartet, 1963: Quintet in C major, Op. posth. 163 - Complete YouTube (53:27), as the film opens in Hamburg, Germany of all places, a beautiful city situated on a gorgeous waterfront.  Young-hee (Kim Min-hee) plays a famous actress who is taking a break from all the publicity in Seoul swirling around her illicit affair with a married filmmaker that ended badly, perhaps getting as far away from the scandal as possible, visiting an older friend who lives there, Jee-young (Seo Young-hwa), who loves the natural beauty of the town, as the two smoke off the balcony, take walks, or visit bookstores, where a terminally ill man strangely describes his own piano compositions, “These are simple pieces, but if you go deeper, they become more complicated,” which could easily be a reference to Hong’s own film career as well.  As they walk around the city, Young-hee is continually waiting for the possibility of an expected friend to meet them, though nothing is certain.  As Young-hee explains it, “He knows where I am.”  Having lived with a man for ten years, suggesting “men all want the same thing,” Jee prefers living alone, free from compromise, or interruption, rebuffing her younger friend’s offer to dreamily live together in this European city, though Young-hee clearly wants to see her mystery friend, but is instead content to openly share her romantic regrets with Jee, still stung by heartbreak, acknowledging she’s still in love with this man, but confused by the disconcerting state she’s in, wondering “Where’s love?  It’s not even visible.  You need to see it in order to search for it.”  Eventually having dinner in the home of a local couple (that incudes Mark Peranson, editor of Cinema Scope magazine), before the night is done, they find their way to the beach, where the scene fades to black before beginning again, listing new cast credits.  Each half is shot by a different cinematographer (Kim Hyung-koo and Park Hong-yeol, respectively).  When the lights come on, Young-hee is all alone in a darkened movie theater, a familiar place in Hong films, an often indistinguishable world where reality and fantasy intersect.  As she walks out the theater door, she begins to reconnect with old friends who happily welcome her back to South Korea, now staying at a beachfront hotel overlooking the sea in the coastal city of Gangneung, which we are reminded is revered for being the most livable city in the country, according to some poll (exactly the same with Hamburg).

The reintegration process moves slowly, first meeting one friend for coffee, who has to abruptly leave before another arrives, leaving her a moment to smoke outside, singing a mournful song to herself before embracing a flower in bloom.  This coffee collective eventually meets for the first of two dinner sequences, where we see Young-hee drunkenly lash out at others, suggesting they don’t know what they’re talking about, calling all men idiots, then exasperatingly raising her voice to condemn those at the table as people who aren’t even “qualified to love,” literally dismissing them from her stratosphere, before turning to the woman beside her and offering her a kiss.  After a short embrace, the two women depart, leaving the others embarrassingly caught off-guard and a bit befuddled.  The next day we find Young-hee dressed in her familiar overcoat, sleeping on the beach, with the pounding waves seen over her shoulder.  A man wakes her up, claiming he was worried about her, and asks her to come warm-up with his friends, as they’ve built a fire.  They are members of a film crew that happen to be in town for a film shoot, meeting up later for a second dinner sequence with the director present, who, it turns out, is Young-hee’s romantically connected director, Sang-won (Moon Sung-Keun), but she is so inebriated she tells him he looks like a grandpa.  He, on the other hand, becomes obsessed with telling her how “pretty” she is, where all his cohorts at the table agree with his assessment, behaving like puppets, affirming everything he says like a religious mantra, actually mocking the sincerity of his thoughts.  Continually shining the light on this actress, the director offers nothing but platitudes, heaping praise upon her that she seems more than delighted to absorb.  When he breaks down, obviously still not over their relationship, it only affirms the hold she still has on him, reading a passage from a book that he wrote for her, recalling how it felt when it was happening.  While the two are clearly in their own little world, the others at the table are ignored and treated as if they’re not “qualified” to be there, but they are, presumably observing this private moment which is unlike any other that they’ve witnessed, offering a rare window into the vulnerability of their lives.  Returning to the earlier scene at the beach with Young-hee asleep in her overcoat, it is viewed from a different perspective this time around.  After she is awakened, there is a long pan to the right where the film crew sits around the fire, returning back to the place where Young-hee was lying but she’s no longer there, as if it was all a mirage, before continuing the pan to the left where at the far edge of the screen we see her being carried off on the back of some strange man, fading to black, with a final credit sequence playing in utter silence.
Posted by Robert Kennedy at 12:08 AM