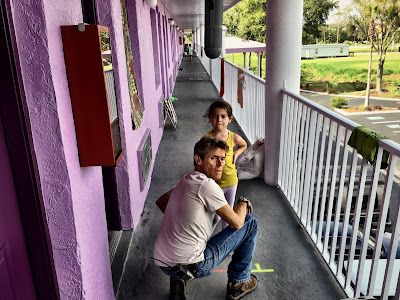 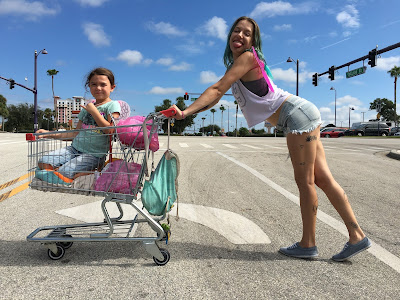 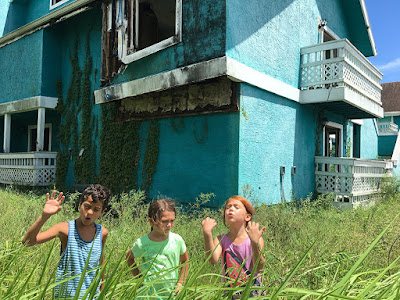 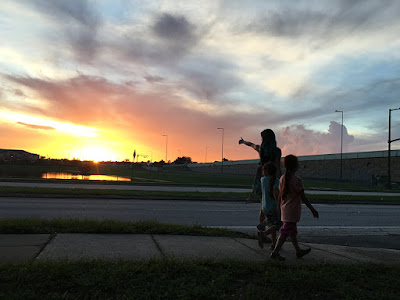 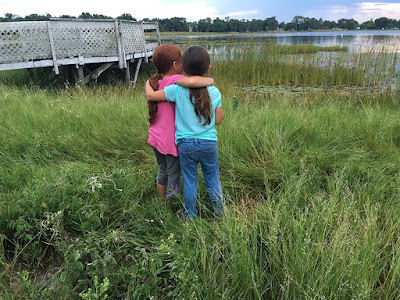 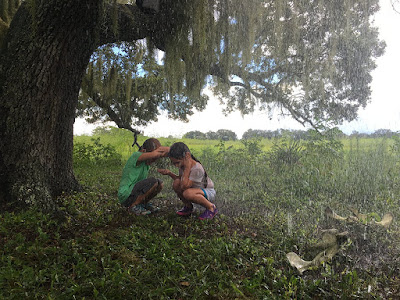 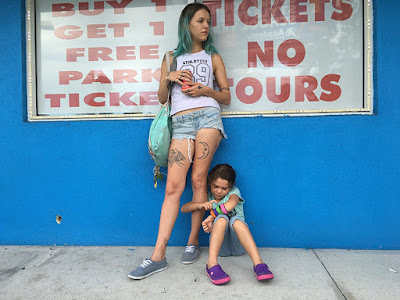 A glimpse of the hidden homeless tucked seamlessly inside the nooks and crannies of a near invisible American underclass, premiering at Director’s Fortnight at Cannes, by the maker of Starlet (2012) and the in-your-face TANGERINE (2015), a cinéma vérité experience shot entirely with an iPhone, this is like the kiddie version of Andrea Arnold’s American Honey(2016), a raw and blistering look at the seamy underside of America, set initially to the outlandishly upbeat music of Kool & The Gang - Celebration - YouTube (4:18), though it feels much closer to a Harmony Korine film, yes, the man who made Spring Breakers (2012), who typically adores those living on the fringe of society, where reality is not the essential truth about the film, but a carefully constructed candy-colored artificiality.  The grimness of the film is a deluded sense of empowerment.  Remove the illusion and what you’re left with is scathingly empty.  Set just off the highway in a cheap, strip-mall motel in Orlando, Florida, a transient city where people come and go, home of the renowned Disney World, which promises to be “the happiest place on earth,” this is an eye-opening, tour-de-force exposé that centers around 6-year old child actress Brooklyn Kimberly Prince as Moonee, who is in nearly every shot of the film, basically running free, ruler of her own little world, free from adult supervision, and just simply has the run of the place.  Co-written, directed, edited, and produced by Baker, in a very atypical experience, spending so much time in the company of kids onscreen, he’s made a film that has white trash written all over it, yet withholds judgment, as it’s not so presumptuous, offering a more free-form expression of kids on the loose, brash trash talkers, wildly uninhibited, full of mischief and back-talk to adults, where they seem giddily happy most of the time, with nothing and no one stopping them from doing whatever they want.  This liberated spirit is the heart of the film, as the place is surrounded by rampant commercialism, the kinds of places seen in every tourist trap, grotesque examples of crass capitalism in play.  Conformity and proper decorum follow these family-oriented businesses, as they cater to kids, luring families and their pocket books by being child-friendly in a landscape of Disney paradise, but it’s all about the dollar signs, as anyone stepping out of line will be rudely escorted out of these places.  But the Magic Castle Motel, where Moonee lives, or Futureland Inn around the corner, are dead-end motels further off the track, away from the strip, seemingly lost in a netherworld, a grungy and decaying depiction of a dilapidated world, where people only find them by making a wrong turn, hilariously exemplified by a Brazilian couple on their honeymoon, who take one look at the dump before heading off in another direction.  Completely off-limits from established middle-class joints, Magic Castle is painted a bright lavender color that makes it look Wes Anderson surreal from The Grand Budapest Hotel(2014), shot on 35 mm, though of course projected on digital in theaters, with an incandescent color scheme by Alexis Zabé, the cinematographer for Carlos Reygadas and 2012 Top Ten Films of the Year: #2 Post Tenebras Lux, yet the film has a cinéma vérité documentary style, offsetting the blatant artificiality with a searing realism.

While these are the kinds of kids you might see running up and down the aisles of Walmart or Target, dodging shopping carts, grabbing food or candy off the shelves, inadvertently knocking things over, and then high-tailing it out of there before the manager can catch up to them, all brazenly done out in the open, and probably repeated in store after store, where despite the fact these are misfit kids, they already have a dubious reputation.  Because of their age, they probably avoid criminal prosecution, but are more likely viewed as smart-alecky kids that get away with murder because their parents are too lax to scold them or hold them accountable for their behavior.  We’ve all seen kids like this, but mostly they remain off the radar, as rarely do films focus their full attention on their lives as they do here.  Moonee’s partner in crime is Scooty (Christopher Rivera), another kid from the motel (wildly adorable, both of whom appeared in formal wear on the red carpet premiere at Cannes), as we follow their misadventures wandering into another apartment complex and creating havoc, spitting on cars from an overhead balcony railing, before running away.  Quickly identified as the culprits, we see them returned to the scene of the crime, where they are ordered to wipe up the mess, but rather than view it as punishment, they turn it into a playful game where one of the kids from the offended party actually wants to join in, Jancey (Valeria Cotto), becoming their new best friend.  And off they go on another adventure, visiting the local ice-cream parlor, hitting on adults for money to buy a cone that all three can share, delightfully lapping it up before it melts.  When we meet Moonee’s mother, Halley (Bria Vinaite), we’re not surprised, as she’s a foul-mouthed, heavily tattooed con artist who also happens to be a pathological liar.  What we witness from her is atrocious and reprehensible adult behavior, as she weasels her way out of everything, rarely keeping a watchful eye on her daughter, always blaming others, thinking only of herself, believing she has a free ride.  She pays rent week by week by scraping up whatever she can, buying discount items and selling them to tourists at more upscale locales, using her daughter as part of the scam.  While she’s a completely unsympathetic character, even resorting to prostitution, she adores her daughter and loves playing with her, always making her the center of attention.

Holding down the fort as manager of this hell-hole is none other than Willem Dafoe as Bobby, the guy that has to deal with all these bottom-dwelling personalities, as the place is filled with people of questionable character, while he’s charged with maintaining the property, fixing all disputes, and taking care of things that break down.  Dafoe plays it straight, making no judgments, abiding by the house rules, refusing to be taken advantage of by overly frugal guests or people with questionable character, such as an aging woman who prefers sitting at the pool topless, causing commotion with the kids, or more disturbingly runs off an old man who takes a perverse interest lurking around the kids, who for the most part comes across as a decent, stand-up guy who treats people fairly, understanding the fragility in their lives, often standing up for them, while also overlooking things and minding his own business.  While there is plenty of outrageous humor in this film, it’s a surprisingly upbeat film that grows more devastatingly grim toward the end, as this film shows what it feels like to be down-and-out in America, with Halley growing more desperate, resorting to riskier criminal activity, where her best friend cuts off relations, then bans Scooty from hanging out with Moonee, feeling like a noose is pulling ever tighter around Halley’s neck, with her world collapsing like a house of cards.  Moonee has no idea what’s going on, showing surprising resiliency, yet there are stark moments where boundaries are crossed, such as when a strange man walks in on her while she’s naked in the bathtub, violating her space, but seen from Moonee’s vantage point, those moments vanish in the blink of an eye, as each day stretches longer and longer, seemingly filled with limitless time, as there’s no real narrative here, where instead each successive day blends blurry-eyed into the next one.  There are moments that stand out, such as when charity food trucks pull up to hand out free food, quickly relocated out back, away from roving eyes, or when Halley and Moonee treat themselves to an all-you-can eat banquet, literally stuffing themselves, with the camera staring straight at Moonee’s face as she devours every bite, offering a view of instant fulfillment, but it’s a mood that can’t last, as everything in their lives is temporary, where there is never any forethought or plan, as this is a fly-by-night operation.  When things further deteriorate with Halley, it’s inevitable that Moonee’s world will also be affected, and though alluded to, that’s not the focus of this film, which dreamily prefers a more impressionable view of children as wild animals running free, scampering through the artificially constructed landscape, where her fate is all too reminiscent of rounding up the wild horses at the end of John Huston’s The Misfits (1961), where the thought of taming and caging them is unthinkable, and ultimately heartbreaking.
Posted by Robert Kennedy at 12:00 AM