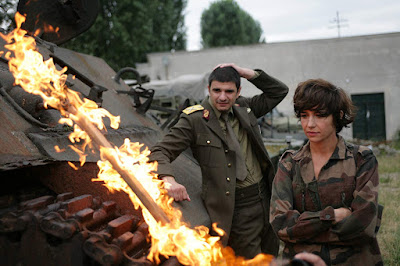 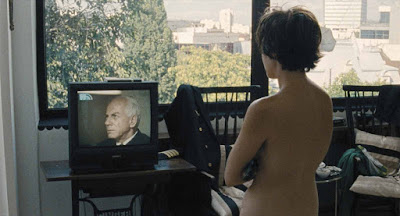 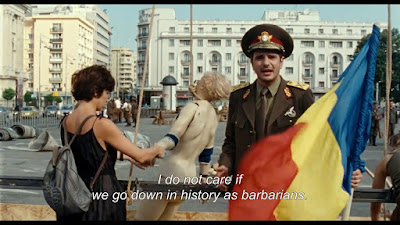 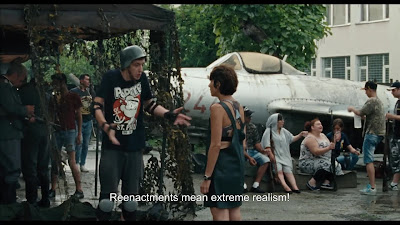 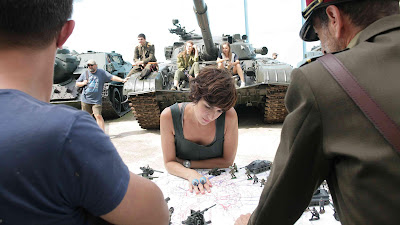 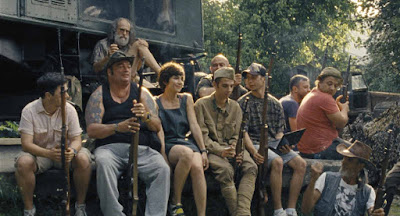 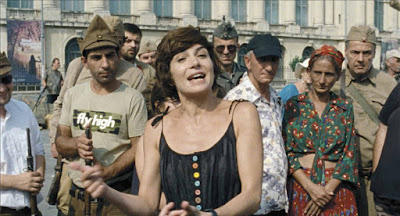 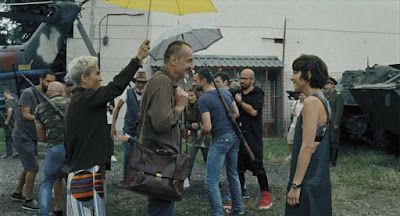 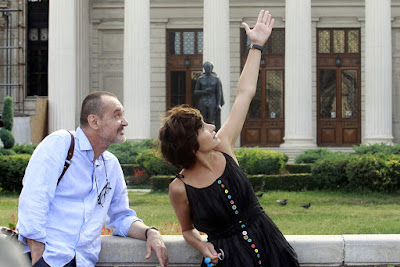 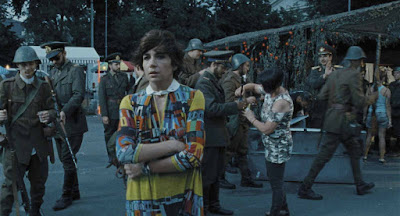 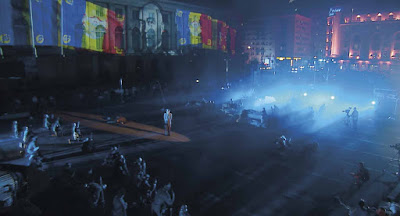 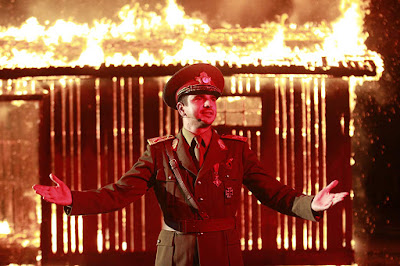 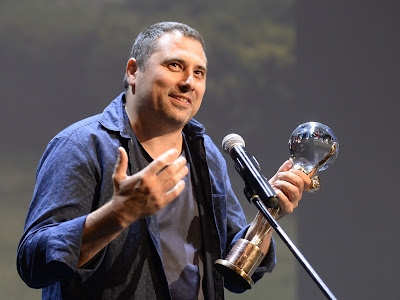 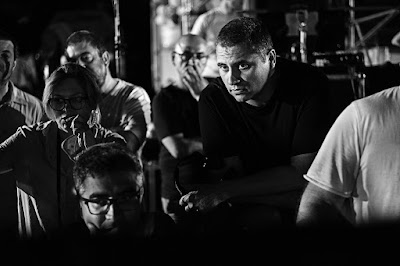 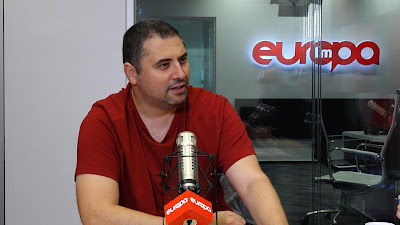 Winner of the top prize at the Karlovy Vary Film Festival, this film essay is a rather provocative attempt to examine Romania’s complicity with the Nazi’s in WW II, as Romania was never occupied by German forces, spending the majority of the war as an ally fighting side by side with German soldiers, contributing 585,000 Romanian troops to the Nazi cause, committing revolting crimes against humanity that are among the worst atrocities in recorded history, something the country has been in denial about since the end of the war, burying the truth (with the director claiming it was taboo to even speak about it when he was growing up), even though Romanian historians have corroborated the facts determined by the Wiesel Commission, which investigated Romania’s part of the Holocaust, incident by incident, determining the country is responsible for the extermination of 380,000 Jews.  Nonetheless, Romanians have continued to blame that all on the Germans, claiming they had no choice, though philosopher and humanitarian Hannah Arendt has claimed that after Germany, Romania is the second most anti-Semitic country in Europe, while also responsible for killing more Jews during the war than any other country but Germany.  And while this film often chooses to intellectualize the subject, it also creates comic sarcasm and absurd black comedy, resorting to an experimental semi-documentary style, where it also comes across as an intriguing follow up to SHOAH (1985), Claude Lanzmann’s epic exposé on the Holocaust, revealing how neighboring bystanders watched and did nothing to stop the organized train of transporting European Jews to crematoriums for extermination, finding nothing wrong with this practice, with ordinary citizens still holding Jews in contempt nearly half a century later.  The degree of hideous anti-Semitism on display in the film is eye-opening, actually constituting hate speech, yet it passes for public discourse, revealing just how entrenched this subject is in the minds and hearts of Europeans who accept this as the norm.  For a Romanian director to tackle this subject is in itself a provocation, much like Croatian director Nebojsa Slijepčević’s Srbenka (2018), featuring the innovative imagination of theater director Oliver Frljić using the stage to reveal Croatian atrocities, which inflamed Croatian audiences, of course calling for an examination of Serbian atrocities, which this theater director claimed he was perfectly willing to do, and has done, but only before Serbian audiences.  The point is, none of this is easily digested by audiences anywhere, but this resistance to reexamine one’s own history is a particular sticking point.  Romania, once the second-largest Jewish population in Central Europe, has eradicated any remaining presence almost entirely.  What we’re left with is centuries of bigotry, where entire cultures have been conditioned to hate Jews in particular, still viewing them as vile creatures, continuing a thought process that has never been educated.  And while this film may attempt to address that shortcoming, despite the meticulous scrutiny shown, the director is also questioning who’s really listening?  Too few will actually see it or understand its implications, going way over the head of an ordinary viewer who probably wouldn’t have the patience to sit through this, where the power of bigotry on the other hand is simply too overwhelming, organically passed on from one generation to the next.

Surprisingly, this film is wrapped up in patriotism, starring Mariana Marin (Ioana Iacob), a stand-in for the director who introduces herself directly facing the camera as a character in the film, an idealistic theater director commissioned by the city council to stage a grand outdoor historical pageant that is, in effect, a reenactment of a significant moment in history.  Typically these are jingoistic displays of nationalistic pride and fervor, where everyone brings their children and comes out to wave flags and applaud the celebration of their independence, often accompanied by music and fireworks, and the mandatory political speeches by local officials.  This event is no different, except Mariana has done her homework, displaying a new era of enlightenment, becoming obsessed with Romania’s role in the Holocaust, reviewing archival footage on her computer, finding the truth starkly different than what she was taught in school, which blamed it all on the Germans.  Surprised by the degree of cooperation by Romanian military officials, the title of the film comes from a pronouncement by Romania’s military dictator Marshal Ion Antonescu to the Council of Ministers in the summer of 1941, literally opening the doors for massive extermination of Jews, enabling Hitler to carry out his Final Solution.  While extensive research allows her to develop a more accurate historical view, she is among a cultured elite, a privileged few, as ordinary citizens still believe what was handed down for decades, with the country still reeling from the postwar effects of Russian occupation and the autocratic rule of Communist dictator Nicolae Ceaușescu who ruled with an iron fist from 1965 to 1989 with a muzzled public forced to accept what they were told.  This blind allegiance for generations requires renewed knowledge, something the country has been loath to do, preferring to hide behind a fabricated mythology that lets them off the hook.  Yet when Romania was granted entrance into the European Union, several historical records were corrected and made public, including the acknowledgement of a 1941 Odessa massacre of tens of thousands of Jews who were shot or burned alive by Romanian troops under direct orders from Antonescu, among the largest massacres of Jews in the entire war, occurring during a joint German/Romanian occupation of what is now the Ukraine, then part of the Soviet Union.  This was part of a massive Nazi military campaign to exterminate European Jews, carrying out similar Babi Yar massacres in Kiev with Ukrainian collaborators and later the Aktion Erntefest mass shootings in Poland, wiping out the entire Jewish population of the Majdanek concentration camp, burying them in mass graves.  Still viewed by some elements as a Romanian war hero, Antonescu was captured by the Soviets, tried for treason and war crimes by pro-Soviet Romanian authorities, duly convicted, and executed in 1946 by a firing squad at Jilava Prison near Bucharest.  A thorough account of his relationship to Hitler and his war involvement, one of the first to orchestrate ethnic cleansing on a massive scale, and one of the central figures of the Holocaust, is written by Robert D. Kaplan, The Antonescu Paradox – Foreign Policy, citing multiple historical sources.  After his death, Romania switched sides during the war, aligned with the Allied powers, with an official report compiled in 2012, FINAL REPORT International Commission on the Holocaust in Romania (pdf).

One of the sources of Mariana’s personal disgust is Sergiu Nicolaescu’s quasi-historical film THE MIRROR (1994), a propaganda film that attempts to resurrect Antonescu’s reputation as a war hero, beaming into all Romanian homes through the medium of television.  We hear her fuming dialogue alongside clips of the film, which inspires her as an artist to set the record straight.  When Mariana decides to publicly reenact the Odessa massacre at the Palace Square in the center of Bucharest, using tanks and rifles from war museums, but also non-professional city volunteers, she discovers their opinions are divided, as many don’t wish to be associated with Jews, none wish to portray Gypsies, while others disagree on the degree of accuracy in the way it’s being portrayed, where the layers involved in the performance reflect the overall population and remain deeply divided on the subject.  This divisiveness, however, is part of the film, as history is subject to interpretation, and here people haggle over their roles, with a boisterous few threatening to walk out altogether.  In this same vein, Mariana is visited by a city official named Movilă (Alexandru Dabija) whose office granted the authorization, expressing concern over the explicitness of the performance, engaging in an intellectual argument on the uncertainty of truth, suggesting all sides have their reasons to distort what actually happened, claiming the mayor is uncomfortable with the public portrayal of war crime atrocities on an occasion that is a day of heroic military celebration.  Their extended argument is the heart and soul of the film, as both are intelligent-minded, yet he sarcastically derides all her sources, suggesting people aren’t interested in spending their holidays witnessing such a gruesome event, that “educating the public is a comical illusion,” with many still objecting to the historical accuracy, including apologists claiming Antonescu is a war hero, a martyr murdered under Soviet authority, also claiming people were forced to say what was necessary in order to gain entrance to the EU, that it was all an agreed upon compromise, with generations of ordinary citizens still believing the official force-fed mythology from the Ceaușescu regime that anointed the military into worshipped heroes.  Mariana, however, is insistent in her artistic intent, refusing to compromise, claiming no government censorship, revealing the actual sources of her meticulous documentation, suggesting she will not be a part of a whitewash of history, contending  “We don’t have the right to be subtle,” as Romanians need to know what actually happened rather than suffer from collective amnesia.  These contentious opinions are spoken forcefully but politely under civil discourse, with Movilă actually showing signs of flirtation and romantic interest, though not afraid to implement power plays threatening to shut down the performance altogether, with Mariana then devising a subversive plan to agree with the compromise, openly rehearse the compromise, then perform what she originally intended on the day of the pageantry.  The length of the film allows plenty of interludes, revealing a pattern of men trying to control her behavior, including Mariana’s personal discussions with her boyfriend (Serban Pavlu), a married airline pilot, that grow contentious, reading aloud various passages from books, or soaking in a bath at the end of the day with a glass of wine and a book in her hand, regurgitating this same material.  The performance itself before a live audience is stunning in the anti-Semitic language used, morally abhorrent and despicable, with no revisionist views offered, literally stirring up and inflaming anti-Semitic sentiment under the guise of a patriotism, so the unfiltered hatred of the 1940’s refuels on the streets of Bucharest again today.  When the reenactment parades Jews through the city streets, hanging some in the city square while others are herded into a wooden building and burned alive, it turns into a grotesque public spectacle, but viewed with nonchalance, as the audience actually applauds (remaining ambiguous whether or not this was scripted), leaving viewers aghast at the extent of public bystander approval, clearly misunderstanding the intent, still blinded by the deeply ingrained effects of historical negationism.
Posted by Robert Kennedy at 12:01 AM