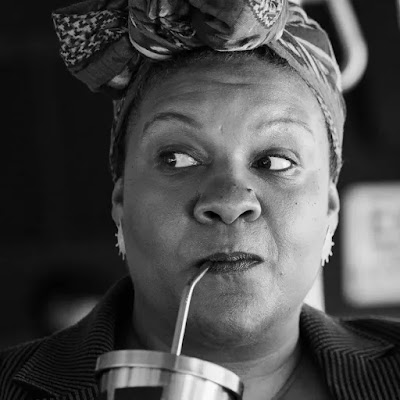 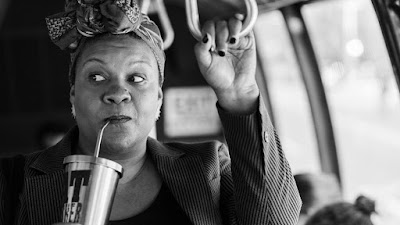 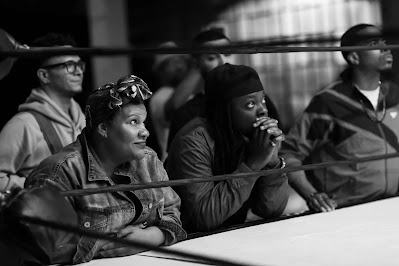 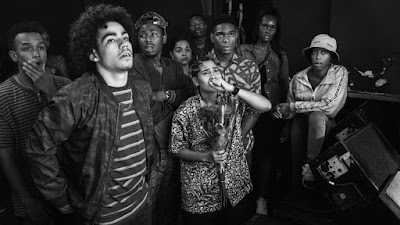 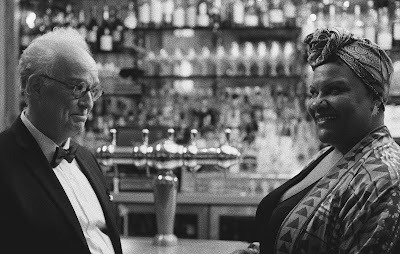 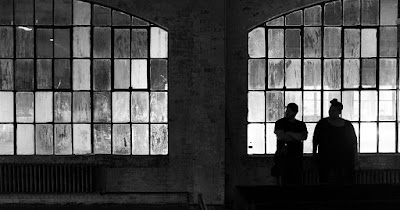 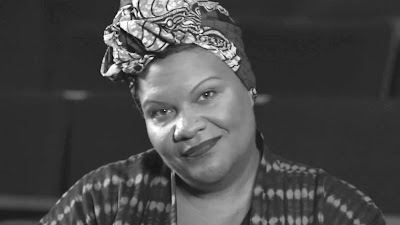 Certainly among the more original efforts viewed today, and not at all what viewers expect, this film brilliantly and at times hilariously mixes a middle-aged identity crisis of personal discontent with theater references and illuminating, hard corps rap lyrics.  Overcome by personal frustration, continually wrestling with self-doubt and depression, writer/director/producer Radha Blank also plays the lead character, finding herself approaching forty but no longer relevant, once viewed as a young star of the theater, winner of a 30 Under 30 Award, yet now a struggling playwright languishing in obscurity, unable to support herself except for a side gig teaching after-school playwriting to an odd collection of high school kids, living alone in a Harlem apartment where she has no romantic relationships and no future prospects in sight, still mourning the loss of her mother, an artist, who died a year ago.  She regularly runs into the ghosts of her past, who appear like summoned characters from her imagination who have been excised from her plays, gone but not forgotten, yet still have a voice, looking straight at the camera offering uncanny observations, reminding her to get ahold of herself, all comprising unorthodox and idiosyncratic representations of an atypical Greek chorus railing against her guilty conscience, like off-the-wall apparitions springing to life with short-lived but shrewd commentary, adding multiple layers of self-deprecating humor, while adding delightfully blunt appraisals from Lamont (Jacob Ming-Trent), a homeless man who keeps a watchful eye on Radha’s life from the sidewalk across the street.  Blank is not your ordinary lead, older, unknown, overweight, and not blessed with beauty, always seen drinking Diet Coke while wearing a do-rag around her head, yet she clicks all the boxes for a struggling artist suffering a midlife crisis, seemingly speaking to all the voices in her head, which creates a delightfully entertaining and theatrical flourish, with her blunt honesty holding the key to our appreciation of her true authenticity, instantly recognizing how unusual this opportunity is, wondering how this was ever financed and brought to light, as she’s literally a shot in the dark.  The story itself pokes fun at this, as her best friend since childhood is an overtly gay Korean guy, Archie (Peter Y. Kim), who is her staunchest supporter.  Both are seen at a posh event for theater producers populated by older white people who thrill at the possibility of expressing their social consciousness with an integrated revival of Fences, or an all-female version of 12 Angry Men, which perfectly describes the cultural schism at hand, yet Archie urges her to speak with an interested white producer J. Whitman (Reed Birney) about her new play Harlem Ave, describing the element of fear engulfing black families from gentrification.  His patronizing recommendation is to whiten up the play to reach a greater audience, while also suggesting she write a musical celebrating Harriet Tubman (or Ida B. Wells or Shirley Chisholm), which leaves her not only angered but infuriated, literally attacking him on the spot before making a hasty retreat.  Archie apparently soothes things over afterwards to avoid pressing assault charges, urging her to make amends, but she’s just not ready to sell her soul to the white man just yet, searching for an alternative solution.

What’s especially intriguing is the intimacy the film offers, where the breadth and scope of the subject is thoroughly scrutinized, offering a more mainstream approach to autobiography than Fellini’s surrealist and more dream-oriented 8 ½ (1963).  Recalling the rhymes she made in high school, which were notorious at the time, with a hilarious song called “Pound the Poundcake” playing throughout the movie, Radha decides to pursue an alternative path, following a lead to a mysterious beatbox artist in Brooklyn known only as D (Oswin Benjamin), she shows up unannounced with a bag of weed in tow, not really sure what to expect.  The single room is filled with smoke, like a local hookah hangout, yet lost in their own worlds are up and coming rappers, while D works his musical magic in the corner, never uttering a word, with one performer showcased at the mike, all collectively grinding to the same beat, with Radha awkwardly trying to get a word in, calling herself RadhaMUSprime, throwing it down when given the chance, like an eruption from her dormant soul, actually showing signs of life.  Surprised she didn’t just embarrass herself, she more than held her own, feeling a bit euphoric, but finds herself alone, asleep on the couch, having to make her way back home in the middle of the night.  This jolt of high-powered energy hits her like a light, creating a lyrical montage of stereotypical outcomes, feeling driven to provide repeated images of “poverty porn,” as that’s what audiences want and expect, becoming synonymous with blackness, tragic experiences she’s all too familiar with, having seen it all around her but would rather forget, aggressively channeling the dark side of human existence, yet her unfamiliarity with her role as a performer is a bit scary and daunting.  When her students, basically a ragtag collection of oversexed hormones on overdrive where every suggested adaptation involves genitalia, each striving for their own identity, urge her into action, thrilled that she actually has a rebellious side they can relate to instead of the has-been version of an artist they’re more inclined to see.  When D lines her up at a rap throwdown, the students get wind of it and demand an invite, while Archie is still trying to patch things up with Whitman, urging Radha to give him another chance, but she’s hellbound on the trail of a new pursuit, only to fuck up big time in the bright lights, where getting stoned ahead of time was probably not the best preparation, falling flat on her feet in public, supremely embarrassing herself, running back to Whitman with her tail between her legs, shamefully willing to suck up to the Man, selling her soul to the devil, as refusing to compromise promises certain obscurity.  As uncomfortable as it feels, she’s on track to perform one of her plays, even if directed by a white woman (supposedly all the blacks were busy), so there’s some comfort in resurrecting her career, even if the voices in her head are alarmingly angry at being sacrificed for this mediocrity.  Even D tries to contact her, but she feels that bridge is burned, that she’s too fragile to just set herself up for more failure, believing playwriting is her career, feeling that’s more in her element, even if she feels like she’s selling out.

Perhaps what’s most interesting is the fresh style of the film, encompassing the wild diversity of New York, winner of the Directing Prize at Sundance, a minimalist throwback to early Spike Lee films, given a theatrical flourish, using a vérité approach, shot on 35mm in black and white ‘Scope by Eric Branco, though in poetic tribute to Harlem Renaissance photographer Roy DeCarava, who used his camera to capture everyday black life in Harlem, finding the various textures of the neighborhood, offering a deeply personal style in bringing subjects on the street to light.  Accentuating this look is a wildly eclectic musical score that features Courtney Bryan’s hauntingly ethereal score in Footsteps of a Queen - YouTube (6:55), while paying homage to classical jazz classics from the 60’s like Donald Byrd’s Donald Byrd - Cristo Redentor - YouTube (5:41) and Quincy Jones’ Quincy Jones ~ Love And Peace (1969) YouTube (5:54), while also mixing in contemporary rap lyrics with an attitude, where her alter ego allows her to joyously accentuate her fat side, making fun of her big butt by finding lyrics identifying a white man with a black woman’s butt, wondering how they would carry the load?   This more playful side opens the door to all manner of new creativity, finding her true voice, where rap poetry may fill the void of an unhappy playwright, as it allows her to connect with the world around her in so many different ways.  Even D is a bit stuck on her, preferring the depth of her storytelling rhymes to the empty lyrics surrounding him, creating something of a romantic fantasy, as a young brother in his 20’s is every middle-aged woman’s dream, though usually they lack the maturity level needed.  Oswin Benjamin is a revelation in the role, quiet and hypersensitive, as if hiding behind his long braids, where it takes a while for him to show himself, but the two perform a tour de force dual rap together called “Mama May I,” with each searching for the voice of their deceased mother, which is profoundly effecting, like the answer to a prayer.  There’s plenty of cutting edge humor in this film, exaggerated versions of white people seemingly relating to the black experience, but from Radha’s perspective it’s the other way around, blacks ceding their ground to allow white expression, which is not the same thing, where the distinction is particularly galling to her, as it’s a kind of censorship that becomes part of the everyday reality of being black.  Part of that reality is accommodating whites, who help pay the bills, but also have the effect of silencing black voices, as they don’t really feel comfortable hearing assertive black messages.  One of the clues to her journey is coming to terms with her mother’s death, meeting her brother at her old apartment and packaging her artworks, sending them to storage where they’re no longer on display, which feels like muting or censoring their own mother’s artistic vision, as between the two of them they simply don’t have the wall space to exhibit it all.  Confronting this obstacle, however, seems to clear her own roadblocks, finding clarity in her mission, sucking it up, admitting to her own personal failures, while leaving the door open to express her real voice, which is surprisingly brash and confrontational, without a hint of commercial aspirations, but she’s got a kickass beatbox generating the rhythm.