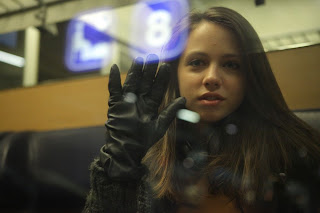 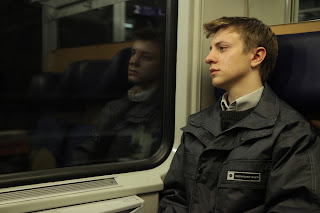 BREATHING (Atmen)                    B+
Austria (94 mi)  2011  ‘Scope  d:  Karl Markovics
One thing international cinema can do is offer a glimpse into the habits and characteristics of people from various countries around the world, and none is more reflective of their unique cultural reserve than films from Austria, where the meticulous rhythm of life is unlike any other.  In Austria, don’t expect anyone to lend a helping hand or to express sympathy for others, and if there’s an incident on the street, such as an accident or police presence, don’t expect the pedestrians to even slow down.  Life is not disrupted by death, illness, or acts of God.  This is a country that measures intelligence by a strict ability to conform to society’s rules, where anyone stepping out of line is an embarrassment to the entire nation.  Almost antiseptically clean, where nothing is ever out of place, people are expected to go about their business with exact precision.  When criminal or other untoward behavior exists, it’s usually carefully tucked out of sight so as not to draw attention to itself.  This typifies the life of Roman Kogler (Thomas Schubert), a 19-year old kid living at the Juvenile Detention Center, where he unflinchingly goes through the required inspection routines, but doesn’t socialize with the other kids at the center, preferring to remain as isolated as possible.  He doesn’t even partake in athletic activities, such as water polo, and instead swims laps solo, where the guys are lined up sitting on the side of the pool until he gets tired out in order to resume their game.  All this is done wordlessly and amusingly, as it’s simply a reflection of the ways things are.  Kogler has special daytime privileges to search for a job as part of a work-release program, where from a brief conversation with a counselor, we can assume things aren’t going well.
In a film like this, one has to extract and inspect clues left behind from the storyline, as Kogler rarely speaks to anyone.  Bits and pieces of his life are revealed sporadically over time, but initially his background is a blank, like his expressionless face.  When he expresses interest transporting corpses at the city morgue, one shouldn’t be surprised at his choice, as bodies don’t talk.  Almost immediately, however, he’s exposed to the naked corpse of a young girl with his same last name, which sends his head spinning, driving him into an emotional paralysis.  This incident seems to almost imperceptively start opening his hermetically sealed interior world.  People notice something different or not quite right, where he fails to utter a word of explanation and instead takes a sudden interest in finding his mother,  When he’s not sure what to do, his older coworkers at the morgue offer him no sympathy or help, but expect him to fall into line.  Each has their own way of approaching the job and they’re not going to change because of some kid.  Still, some of the scenes at work are among the most emotionally unvarnished in the entire picture, portraying death exactly as it is, without an ounce of artifice.  Roman’s own cold and steely reserve reflects his approach to everything, from maintaining a healthy distance with the dead, also his roommates, coworkers, and even his approach to finding his mother, where he doesn’t let on right away, but instead keeps a respectable distance.  When he does reveal his identity, she’s not exactly thrilled to see him, but this extended sequence is brilliantly conveyed through his emotional confusion, where any number of possibilities could happen, but one can hardly be prepared for the cold hard facts of reality when they present themselves completely unexpectedly.
Nothing is overdone here, everything is exactly as it is, where this coming-of-age story is somberly reflected by his unidentified internal pain that he carries around with him at every stop along the way, never expressing a word in his defense when he arrives late one evening, or uttering a single complaint when things don’t go his way, but it’s clear after awhile that he’s led a wrenchingly sad and lonely life.  Easily one of the best scenes in the film is when a gorgeous and free-spirited American girl (Luna Mijovic) sits next to him on the train, whose unbridled inhibitions certainly stand out, where their near wordless ballet of unexpressed thoughts is priceless, leaving a hint of more to come, which is about as optimistic as this film gets.  But this unravels as an interior psychological exposé, where the accumulated details of his life, both the present and the past, intersect in a developing storyline, where he’s not the anonymous figure walking down the streets at the beginning, where he becomes someone that matters to each of the people in his life, making his presence felt in very subtle ways, but felt nonetheless, which is an immensely appealing turn of events.  With a 20-year acting career behind him in movies, television, and the theater, first time writer/director Karl Markovics has created a visually compelling and seamless work where everything feels fully integrated into this young man’s life, becoming a detailed and complex portrait, but always carefully controlled, never revealing more than is necessary.  This was Austria’s choice for the Best Foreign Film at the 2012 Academy Awards, and is an impressively directed and beautifully balanced first time feature, immersed in the internal symmetry of its own soul searching.
Posted by Robert Kennedy at 9:46 PM