The Kid With a Bike (Le gamin au vélo) 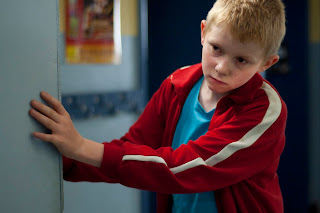 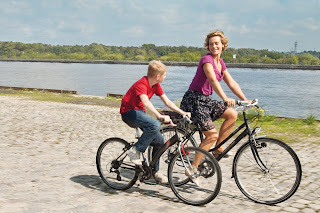 THE KID WITH A BIKE (Le gamin au vélo)          B-
France  Belgium  Italy  (87 mi)  2011  d:  Jean-Pierre and Luc Dardenne
Easily the most contrived and manipulative of the Dardennes Brothers’ films, one which borders on melodrama and is likely to divide audiences, as they will either despise or feel sorry for the protagonist, in this case an 11-year-old boy Cyril (Thomas Doret), who from the outset is seen as a determined but problematic kid, one who is not likely to listen to or believe anyone else, but instead do whatever he wants with no apparent punitive repercussions.  Known for writing their own screenplays, a documentary style, the use of hand-held cameras, and complete lack of artifice in a social realist setting, this film is an extension of their previous works, where this young boy is in nearly every frame of the film, initially seen as a detestable brat who insists the world is lying to him about the whereabouts of his absent father, involuntarily placed in a boys home where his only desire is escape.  Obsessively driven by inevitable circumstances, the reunification with his father, the bare-bones plot seems paper thin, as more and more it becomes clear his father has abandoned him.  Nonetheless, Cyril continues to seek him out with relentless desperation, including multiple escape attempts.  Simply by accident, in the building where his father previously lived, he grabs and clings to a woman, Samantha (Cécile de France), to avoid being captured by the authorities, where she offers further assistance by finding the bike he reported missing, which is his only link to his father.  His bike is his only means of flight and freedom, as it can seemingly take him wherever he needs to go.
When Samantha agrees to house Cyril over the weekends, offering no reason whatsoever for this extension of kindness, her character is immediately seen in glowing and rather angelic terms, as a guardian angel watching over an angry and dissolute child.  It’s never made clear why Samantha takes such an interest in this utter stranger whose life is a perpetual series of misfortunes, but the first thing he does is disobey her with the same consistency as he does other adults.  While she actually reaches out to him and helps find the father (Jérémie Renier), the object of his continuous obsession, who is working in a neighborhood nearby, the father simply shows no interest in seeing him again.  While it’s clear there are damaging psychological issues, no one seems to offer any assistance on that front, as it is never mentioned.  Cyril instead is left to resolve his personal issues on his own, where he gets involved with a gang of street kids who easily steal his bike (the kid never learns to use a lock), headed by an older kid Wes (Egon DiMateo), something of a dark angel who takes a particular interest in him, taking him under his wing, using Cyril’s blind persistence to hold onto his bike as a useful tool in accomplishing a secret task that he has in store for him, using Cyril to take care of some unfinished business, which, of course, he readily agrees to, as he thinks this guy is his new friend.  To a kid who has no one, a new friend has a strange and intoxicating allure, so much so that he continually lies and deceives Samantha, who mystifyingly continues looking out for his best interests, even at the expense of her own relationships, where boyfriends find Cyril nothing but endless trouble, an ungrateful and impudent malcontent who refuses to listen or learn.
Clearly, Cyril tests the audience’s patience as well, as the typically non-sentimental Dardenne approach leaves one thinking this is an unusually obnoxious and abrasive kid, one who is continually asking for trouble.  This escalating wrongward path can only have a few possible outcomes, where the narrow focus of a child’s fate becomes overly predictable, especially considering all the contrivances thrust upon the audience along the way, where this becomes a black and white existential struggle for good and evil, meaning and salvation, where Cyril is caught between the vested interests of a dark force and a guardian angel, where both are trying to tap into and redirect this kid’s inner rage and seething discontent.  The overlying reliance on maternal affection and sense of societal justice appear quite French, where both somehow miss the point, but are overly accentuated with an exaggerated power of influence.  Cyril is a psychologically damaged and extremely self destructive kid, one who would not likely succeed without intensive personal therapy, but this film bypasses the necessary hard work involved and instead would have you believe that a healthy dose of motherly affection is all he needs to steer him on the right path, which for a realist film is a bit preposterous.  Adding to the solemnity and sense of interior transcendence is a brief recurring passage from Beethoven’s 5th Piano Concerto, Glenn Gould - Beethoven's "Emperor" Concerto 3/4 YouTube (9:53), the symphonic section just preceding the introduction of the solo piano.  These brief passages hold clues and are musical road markers interspersed throughout the film, where the piano is heard only over the end credits, where the narrative finally offers a glimpse of renewal and a sparing sense of release.
Posted by Robert Kennedy at 5:10 PM