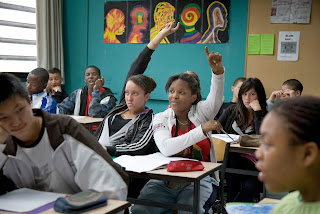 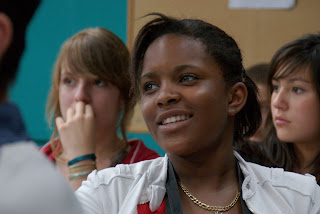 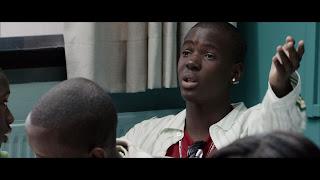 THE CLASS (Entre Les Murs)             A-
aka:  Between the Walls
France  (128 mi)  2008  ‘Scope  d:  Laurent Cantet
Hardly sugar coated, but definitely troubling, as many viewers will be aghast that the “system” doesn’t work any better, this is a self-portrait of a flawed inner city school system inside Paris, France, given a healthy dose of authenticity when one of the co-writers, François Bégaudeau, wrote the book on which the film is based and is also the featured junior high school teacher in the film, giving it a near documentary portrait of the goings on inside his classroom as well as a look behind the scenes at his school.  Outside of an opening shot where the teacher (François) grabs a cup of coffee, the entire film takes place “between the walls” (translated French title) on the school grounds.  In general, most of the students are dark-skinned with African or Arabic roots with ethnic backgrounds from former French colonies, specifically North and West Africa as well as French-speaking Caribbean countries, while nearly the entire teaching and administrative staff, who introduce themselves in an opening orientation meeting, are white.  So just looking at this scenario, one sees we’re on a collision course just waiting for accidents to happen.  While François is a committed white educator with four years of experience teaching French, his class remains a cry of rebellion, as students are free to interrupt or interject their thoughts whenever they please, as if it is a democracy.  Initially he sets a standard of raising one’s hand but then never follows this criteria for the rest of the film.  What’s curiously unique about this classroom is that it’s as much about the students as it is the teacher, where in a somewhat provocative gesture, he calls upon students to voice their views, even if they express a disinterest, which results in open rebellion and arguments, occasionally insults, where the time spent is hurling personal insults and challenges to one another, sometimes with name-calling and disruptive classroom laughter.  What begins as an attempt to utilize teaching methods turns into something different altogether, as few students do the homework assignments or express any interest in what he’s teaching, as evidenced here:  Multiculturalism in France: short video clip from "The Class" YouTube (2:36).