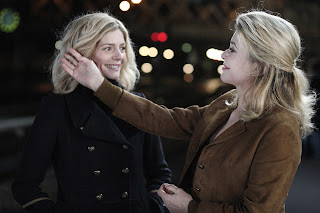 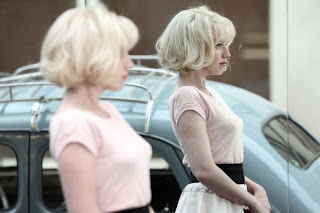 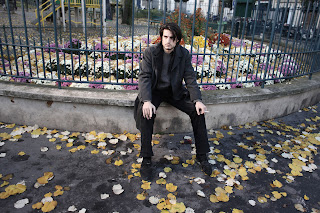 Christophe Honoré, a regular early contributor to Cahiers du Cinéma and an established novelist before he became a filmmaker, has developed into a remarkable cinematic storyteller, as his films are layered with meticulous novelesque detail.  A film dedicated to Marie-France Pisner, who died April 24, 2011, one of the screenwriters and actresses in Jacques Rivette’s landmark film Céline and Julie Go Boating (Céline et Julie vont ... (1974), and an actress in Honoré’s own DANS PARIS (2006), which remains arguably his best film, and the first of his films where out of the blue one of his characters will break into song, much like the surprising use in MAGNOLIA (1999), which he uses to tender effect in a telephone conversation between lovers, a moment that rises to magical heights.  By now, he’s written several musicals, exploring the dynamics of a three-way relationship in LOVE SONGS (2007) and the pent-up passion in a Sirkian youth melodrama in LA BELLE PERSONNE (2008).  Honoré’s films tend to leave audiences sharply divided, and his use of songs as an extension of the narrative is no exception, as he doesn’t accompany songs with traditional dance numbers, or a lively choreographed sequence, but instead delves into the downbeat psychological mindset of the character, often submerged in anguish, lost love or grief, where musical numbers are used in the exact opposite manner of one’s usual association, which is happy and upbeat, such as Demy’s THE UMBRELLAS OF CHERBOURG (1964).  There’s even an umbrella sequence in this film which takes place in the howling wind and rain where the umbrellas are about to be blown away, and instead of the vivid kaleidescope colors, the frame is dark and dreary.  Honoré has been consistent in his career in exploring matters of the heart through non-conventional means, where MA MÈRE (2004) remains as unconventional a film as you’ll ever see, but also a film that makes terrific use of a recurring musical motif, the song “Happy Together” by The Turtles.  Music has always been one of the best attributes of an Honoré film, from the bone-jarring rock music used to disorienting effect in 17 TIMES CÉCILE CASSARD (2002) to the punk music that sets the stage for a moody and introspective assault to the senses in DANS PARIS.  In nearly every film, grief is a major element for the prominent characters, where his films show unusual levels of depth and complexity by intensely exploring how love is like memory, never disappearing, forever etched into the fabric of our lives.

One of the real treats of this film is seeing Catherine Deneuve work with her daughter, Chiara Mastroianni (who’s been in every Honoré film since LOVE SONGS), where one cannot help recalling Jacques Demy’s bliss-drenched THE YOUNG GIRLS OF ROCHEFORT (1967), where the main attraction is the adorable sisters, blond Catherine Deneuve and her older sister, brunette Françoise Dorléac, at ages 24 and 25, both stars from their teens, as this is the only time they ever worked together onscreen.  Deneuve has worked with her daughter before in André Téchiné’s charming MY FAVORITE SEASON (1993), also more recently in Arnaud Desplechin’s dysfunctional family portrait, A CHRISTMAS TALE (2008), but this is the first time they’ve worked together in a musical, and their scenes together are simply stunning.  Mastroianni, especially, as Véra, the daughter of Deneuve’s character Madeleine, is at the heart of the film, as her emotional turmoil reflects the anxiety of the era in which she grew up, the late 80’s and 90’s when the world was coming to terms with AIDS, where the terrifying idea of love is as under attack as the human body.  Ludivine Sagnier plays Madeleine as a young girl in the years before she had a child, where this film spans four decades from 1964 to 2008.  In the fashionable 60’s, Madeleine is strikingly attractive, catching the eye of an equally handsome and ambitious young Czech doctor, Jaromil (Radivoje Bukvic), very much in the mode of the Daniel Day-Lewis character from Philip Kaufman’s historical romance THE UNBEARABLE LIGHTNESS OF BEING (1968).  Completely offscreen, in a blip of the eye, they fall in love, get married, move to Prague, have a child, and get divorced, before she’s seen later in Paris.  But Jaromil returns to Paris years later, maintaining an on-again and off-again relationship throughout her life, even after she’s married to François (Michel Delpech), supposedly a stabilizing influence in her life.  Véra, meanwhile, develops an infatuation with two different men, one with fellow Parisian Clément (Louis Garrel, who’s been in every Honoré film since MA MÈRE) that’s already over by the time it hits the screen, and another with an American exile in London, a drummer named Henderson, played by Paul Schneider, from David Gordon Green’s ALL THE REAL GIRLS (2003) and Jane Campion’s more recent BRIGHT STAR (2009), where the tempestuous confusion in their relationship is fraught with difficulty.

As Madeleine transforms into Deneuve, Jaromil is amusingly played by Czech director Milos Forman, adding plenty of warmth and humor into his character, as he’s simply delighted to be around his ex-wife and daughter whenever he can, often making trips to Paris to revitalize his relationships.  Part of the appeal of this film is the use of actual locations in Paris, Reims, Prague, London, and Montreal, where Honoré uses his traditional cinematographer Rémy Chevrin and original music from Alex Beaupain, both of whom have worked with him on and off since his first film.  Chevrin’s hand-held camera work is simply superb, both in capturing the bustling energy from the world outdoors and in some of the most extreme close ups ever captured.  Beaupain’s songs are not to be compared with the legendary Michel Legrand, as none are particularly memorable, but they do feature the delightfully charming Ludivine Sagnier singing “Je peux vivre sans toi” Je peux vivre sans toi - Les Bien-Aimés (Extrait) - YouTube (3:03), or Clara Couste as a young Véra singing "TOUT EST SI CALME"- Les Bien Aimés Fi (2:39), an ensemble piece which interestingly features older characters of both Véra and Madeleine interacting in the same shot with younger versions of themselves.  In perhaps the scene of the film, Véra has the bar band experience of her life as she meets Henderson for the first time, the drummer in the British band that’s singing the 1956 Bo Diddley classic “Who Do You Love?” Thousand - Who Do You Love - Chiara Mas (2:58) in English, later heard again in a French refrain that is decidedly more downbeat Les Bien-Aimés - Qui aimes-tu? (2:44).  Perhaps more than any other director working today, Honoré continues to work on riffs off the French New Wave, often expressing the ebullient energy of youth in vibrantly colorful street sequences, but also the downside of this blissful and breezy existence, exploring the personal introspection and brooding nature of lost and adrift people who feel disconnected from the world around them, becoming painfully heavy at times, where the psychological torment can literally suffocate these characters, some of whom never recover.
Posted by Robert Kennedy at 6:57 AM