A Monkey On My Shoulder (À coeur ouvert) 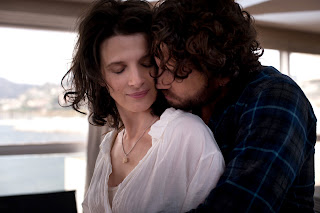 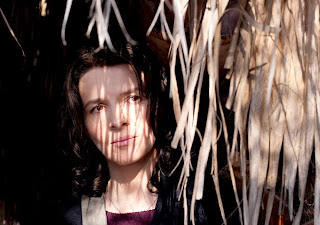 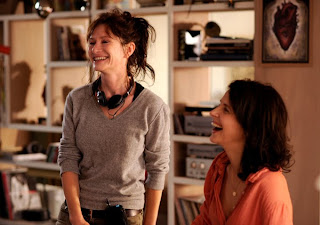 director Marion Laine on the set with Juliette Binoche

Not sure how this project ever came to light, filmed by French director Marion Laine in her second feature, her first being an adaptation of a Flaubert short story in A SIMPLE HEART (2008), so her area of expertise apparently is in matters of the heart.  Adapted by the director from a Mathias Énard novel Traveling Up the Orinoco, she took certain liberties, especially in reconceiving the end, where the initial interest was from Venezuelan actor Édgar Ramírez, from CARLOS (2010), who asked Juliette Binoche if she’d consider playing opposite him.  They switch roles from the book, which features a French leading man and a South American woman, but both play successful doctors working at the same hospital.  Given a narrative structure that resembles A Star Is Born (1954), initially it’s Ramírez as Javier who receives all the acclaim as a leading heart surgeon, with Binoche’s Mila playing a more supportive role in the operating room.  Married for ten years, they are a somewhat sophisticated couple, balancing career and home life, where they both work well together with the steady hands of skilled surgeons while also having a freely uninhibited sex life at home.  But Javier ignores the hospital’s warnings about his excessive drinking until they revoke his privileges, slowly at first, but when he continues to flaunt his rebellious streak against their authority, he’s basically out of a job, having a position in name only.  Utterly humiliated, his pride takes a beating, which only leads to more drinking, where his sanctimonious behavior is pretty deplorable (much like the final episode of CARLOS), where one wonders how Mila could survive his wildly aggressive and often violent mood swings, but she is a believer that love cures all ills.  What changes her mood is to learn surprisingly that she is pregnant, where in typical French behavior, she only takes birth control some of the time, believing that’s enough.

Mila prepares to have an abortion, as both never intended to have children, until Javier changes his mind.  Since he’s not working anyway, he thinks a baby may alter his mental outlook, so being the devoted wife, Mila agrees to sacrifice her career and move to South America to make him happy, hoping it might jump start his deteriorating self-esteem.  Well, lo and behold, it doesn’t, where this turns into a wretched display of drunken behavior, accentuated by self loathing, growing worse by the minute, where the free-for-all of detestable mistreatment of one another, especially during Mila’s pregnancy, is revoltingly pathetic and hard to watch, as a good portion of the film is spent fighting and screaming at one another, where a good deal of the set is destroyed in the process, where multiple takes must have been fun.  The melodramatic overreach is utterly predictable, where halfway in viewers may think enough is enough, as the miserablist tone rarely changes, making this a one-note movie.  Laine does exhibit a surrealistic flair for dream sequences by the end, however, which are actually set in the magnificent Iguazu Falls of Argentina, but this comes way too late to rescue an already sinking ship.  There isn’t an ounce of credibility that either Binoche or Ramírez are doctors, but the French have a way with love scenes.  In the end one of the characters suffers an accident and falls into a coma, expected to never revive, where in the book the character dies and the partner performs the autopsy, labeling each body part in meticulous detail, which one must admit is a thoroughly horrid finale.  The film leaves the ending open ended, where the picturesque dream sequences finally scream with life.
Posted by Robert Kennedy at 10:38 AM