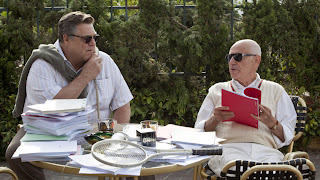 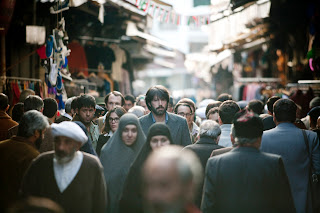 Every one of Affleck’s three directed films have contained a contrived and heavy handed plot twist which dramatically elevate the theatrical material, where the viewer must suspend belief as the direction instead goes for Hollywood melodrama, oversaturating the screen with a kind of hyper-tense reality that exists only in fiction, where he simply takes poetic license to supercharge his movies.  Some may find the amped up suspense entertaining, where he often matches it with excellent musical choices, such as Dire Straits and Led Zeppelin here, but there’s also an underlying deceit going on in the relationship with viewers, where the director is not being straightforward or honest, as instead he’s exaggerating for the Hollywood cinematic effect he’s looking for.  It’s this manipulative dishonesty that some might find suspect, as it taints his prodigal talents as a director.

Affleck’s exaggerated lie here is the Americanization of history, as told through a Hollywood perspective, using the familiar tagline, based by real events.  Focusing on a story as if it is an American example of heroism and courage, left out in the process is the heroism and courage of the Canadian Embassy who secretly sheltered the Americans for 79 days, at great risk to themselves, and helped them escape, where Ken Taylor, the Canadian Ambassador, received the Congressional Gold Medal, the highest civilian honor, in 1981.  The Hollywood version, of course, credits the CIA, but according to President Ronald Reagan in his medal award speech to Taylor, Remarks on Presenting the Congressional Gold Medal to Kenneth ...  “The Canadian Government in Ottawa and the Embassy began the ingenious preparations for an escape. The Canadian Government agreed to issue fictitious passports to the Americans. The Canadian Embassy staff began making flights in and out of Tehran to establish a travel pattern and to learn airport procedures.”  Canada was praised in the American press at the time, where Canadian flags were flown all over the United States, and songs were even written thanking Canada, but former Ambassador Taylor was incensed when he saw the movie premiere at the Toronto Film festival, where Ben Affleck stars as a heroic CIA agent responsible for facilitating the escape of six Americans from Iran during the same period as the Iran Hostage Crisis of 1979 where 52 hostages were held for 444 days, when in reality it was just as much the Canadian Ambassador who enabled the escape, viewing the original movie postscript that suggests the citations he received were unwarranted due to the CIA’s clandestine efforts.  Meeting with Affleck afterwards, the postscript was changed (Ben Affleck Changes 'Argo' to appease ex-diplomat) to note the CIA “complemented efforts by the Canadian Embassy,” but Affleck remains the sole Hollywood American hero.  It is exactly this kind of blur of truth and fiction that passes for the truth nowadays, literally revising history to suit American jingoist purposes.  When viewed in this light, this is little more than the continued shamelessness of using movies to present a mythical view of the American West with the Hollywood cavalry riding to the rescue.  One can imagine Mad magazine having a field day doing a satiric slant on this depiction.

That said, with Argo: Too Good To Be True, Because It Isn’t, Affleck largely draws from the accounts of Antonio Mendez’s 1999 memoir, The Master of Disguise: My Secret Life in the CIA, events that were kept classified until President Clinton declassified them in 1997, and Joshuah Bearman’s 2007 article from Wired magazine (Wired article).  Affleck plays Mendez, who won the CIA's Intelligence Star of Valor for his role in engineering the escape of six Americans from Tehran in 1980, and the film is largely based from his self-serving viewpoint.  The irony, of course, is that it was the CIA’s idea to invent a Hollywood style escape, using a fictitious movie company scouting locations for a sci-fi movie in Tehran, using an actual script and drawing storyboards, where the six Americans were given fake Canadian passports, suggesting they are all part of a Canadian movie production team scouting Iranian locations before all leaving the country shortly afterwards.  The U.S. government was knee deep in a state of demoralization and utter paralysis during the hostage crisis, as there was little they could do to counter the negative publicity of Americans being held hostage and gas prices suddenly skyrocketing, as if the perpetrators were actually being financially rewarded for this outrageous act.  But there is jubilation in the streets of Iran and the seeds of revolution, as they get rid of the Shah, an iron-handed tyrannical despot who was installed by the CIA in 1953 at the American Embassy against a democratically elected, but Soviet backed Prime Minister, so their liberty is gained, at least in their eyes, by standing up to the “Great Satan.”  Traitors and collaborators are strung up on the streets as a message to citizens that the last vestiges of the old ways have been severed and a new day has begun.  The real untold story, which remains secretly classified to this day, is how newly elected President Ronald Reagan orchestrated an Algiers Accords, which many suspect was an arms for hostages deal with the Iranians, where on the day of his inauguration all the hostages were mysteriously released.  But of course, that history hasn’t been written yet.  So instead we get this smaller version of a feel good story, where Hollywood embellishes the daring American initiative, all but leaving the Canadians silent.  In this topsy turvy world of real intelligence and fabricated identities and scenarios, embellishing the storyline *is* what Hollywood does best, even in its real life spy capers, so watching this movie does produce a bit of an unintended smile.

Perhaps the best part of the movie is the daring escape sequence, which is another example of the great fictionalization of history, turning it into an homage to DIE HARD (1988), but despite the seemingly overwhelming odds, where every possible obstacle must be overcome and everything that can go wrong does go wrong, all ratcheting up the intense pressure of the moment, that tension was generated with more believability and suspense than the fake film crew’s location inspection.  The team is quickly swallowed up by the streets of Tehran which are literally teeming with hostile demonstrators, where the portrayal of blood curdling anger and hatred all seemingly projected at them is a perfect example of Hollywood hysteria, using stereotypes and demonizing images to depict a near surreal world of fanaticized hatred when they are surrounded by an angry mob, a dreamlike nightmare that is in every respect an unmitigating disaster.  The Arab world (including Arab-Americans) has never recovered from this kind of hostile depiction in the movies, remaining fodder for racial profiling, as they will forever be portrayed as the fanatics, even as there are homegrown American fanatics like Timothy McVeigh, John Allen Muhammad, or Charles Whitman.  It would be hard to imagine an Arab-American love story coming out of the current Hollywood culture, which makes no attempt to understand or appreciate Islamic culture either in television or the movies, reflecting the prevailing hostile culture of the times, much like the 50’s never portrayed gays or blacks or married couples sleeping together on television.  Unfortunately it takes generations before these kinds of negative depictions are overcome.  While it should be understood that the initial security breach in 1979 allowed a swarm of Islamic students and militants to overrun the American Embassy, much like recent events where the American Ambassador to Libya was murdered, where in each situation the nation’s long-term tyrannical leader was deposed in disgrace, where pent-up street turbulence fills the void of an absent leadership or authority, where at least in Iran, that legitimate authority was replaced not by a democratically elected leader, but by a Supreme Leader of Iran, a theocratic leader who is the highest ranking political and religious authority in the land.  Despite the passing of more than 30 years, little is known about the nation of Iran in the United States, or their way of life, even after a long-term military occupation of neighboring Iraq, as nothing but a constant stream of stereotypes and negative depictions are ever seen in the movies or in the newspaper reports.  This film, though thoroughly entertaining, will do nothing to alter that depiction in the eyes of Americans.
Posted by Robert Kennedy at 10:12 AM