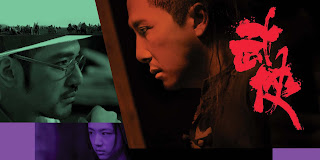 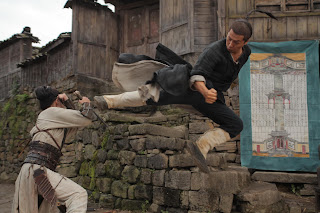 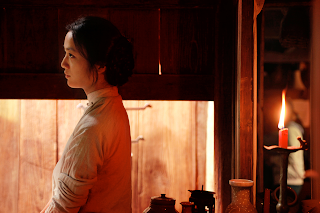 While Peter Chan directed one of the gentlest and most hauntingly beautiful romance films in the past 25 years, COMRADES: ALMOST A LOVE STORY (1996), starring Maggie Cheung and Leon Lai, a film exploring the rapidly changing worlds of both Hong Kong and the Mainland that was about to obtain sovereignty of Hong Kong, a capitalist island in the midst of an otherwise socialist nation, Chan has since amassed a fortune directing and producing martial arts films.  Wu Xia is a Western influenced martial arts extravaganza set in the historical era of 1917 in China, heavily stylized by dramatic set pieces, gorgeous ‘Scope cinematography by Lai Yiu-fai and Jake Pollock, using slow motion and spectacularly choreographed martial arts action sequences created by lead actor Donnie Yen, stop action photography used by Guy Ritchie in the two SHERLOCK HOLMES (2009, 2011) movies, but most significantly a love for the forensic techniques familiar to television audiences of CSI: Crime Scene Investigation (2000 – present), turning this into an extended episode of CSI:  Hong Kong circa 1917.  The storyline, however, though set in a historical era, resembles a mix of many martial arts movies, while bearing a significant resemblance to Cronenberg’s A HISTORY OF VIOLENCE (2005), where a quiet family man, Liu Jinxi (Donnie Yen) hides a secret past, once a notorious outlaw, now living an unassuming and humble life as a bamboo cutter in the fields with his wife Ayu, Tang Wei from Ang Lee’s LUST, CAUTION (2007), and two children.

The film continues the prevalent use of supernatural physical skills mixed with unheard of mental powers, creating a heavily idealized, somewhat comic version of a martial arts hero as a kind of superman.  Their dexterity displayed by flying through the air, lightning quick fighting techniques, running swiftly over rooftops, or even blunting the effects of a sharp sword simply by possessing knowledge of some divine yet ancient blend of mental and spiritual power that makes a man nearly invincible.  As if that’s not enough, they also have a unique ability to kill a man with a single blow to the temple, nearly impossible to any mortal man, but a learned technique to those trained by the gang known as 72 Demons.  After Liu Jinxi draws attention to himself by single-handedly stopping a robbery in progress, where an extensive battle sequence carries over into the public streets where bystanders watch in utter amazement as one man ultimately prevails against two battle hardened gangsters with criminal records, the nation’s leading forensic expert is summoned.  The chief investigator is Xu Baijie (Takeshi Kaneshiro), a grim, overly severe detective who rarely changes the expression on his face, which is constantly seen in the strangest positions examining evidence, often using stop motion photography to simply intercut his face.

The film loves to show forensic evidence, delving into camera views of supposed actions taking place inside the human anatomy from a blow suffered in combat, where Xu Baijie tests his theories, drawing references to similar incidents he has examined in the past.  Always respectful and polite, he takes quite an interest in Liu Jinxi, especially his mysterious past, quickly realizing he possesses amazing skills that few men ever master.  A series of interviews between the two men becomes a battle of wits, playing a kind of internalized chess game, where Liu Jinxi never overreacts to the constant probing of a past he has little interest in resurrecting, while Xu Baijie is equally cautious not to reveal what he begins to understand.  This psychological chess match contrasts the subsequent blownup extravagance of the battle sequences to follow, where both Xu Baijie and Liu Jinxi’s actual family come searching for who they each contend is actually Tang Long, a notorious gangland killer of the 72 Demons and second in command.  The explosion of his past resurfacing into the present leads to a spectacular series of action sequences that also display a rare degree of tension and suspense.  While the film will play well to the devoted fanbase of martial arts films, to other cinephiles, the lack of character development is a serious drawback, where outside of these two principals the rest are largely exaggerated and stock movie roles, where throughout the film little sympathy is generated for anyone onscreen.
Posted by Robert Kennedy at 12:00 PM