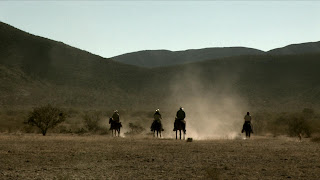 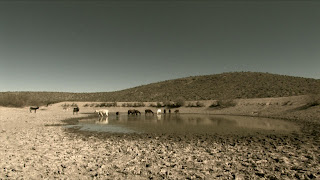 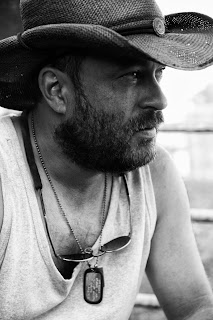 Four years in the making, where the filmmaker immersed himself in the arid regions of northeastern Mexico, known as Cuates de Australia in Coahuila, from 2004 until 2007 when he actually began filming.  The director’s father was a veterinarian, so his earliest memories are cattle ranches, the subject of this abstract film examining mankind’s place in such a hostile and unforgiving environment.  Told without any narration or talking heads, this is more a visual meditation on ranchero culture, where what’s immediately clear is the mix of beauty in the landscape with wrenching human travail, where a son decides to forego college in order to work the land with his father, who’s getting older and can’t do it alone, so for the son there’s no hesitation or second guessing, though the viewers are well aware of his dreams being deferred.  What’s inspiring, however, is how he quickly adjusts his dream to wanting to learn to be a better cowboy, where in his community, being a cowboy is more useful or valuable than becoming a lawyer.  Shot by the filmmaker in a cinéma vérité style where people occasionally acknowledge the presence of the camera, a constant reminder of an outside force in their midst, this is a film essay on what amounts to a human migration cycle, set in a dry and remote area that is so isolated there are no real roads, no communications, and no electricity.  Here a group of ranchers work tirelessly to survive in the desert before the water dries up, utterly dependent upon the land, barren and unforgiving though it may be, literally hiding from death, waiting and hoping for the rains, eventually turning into a mass exodus escaping a drought that leaves death in its wake, where it seems the harsher the environment, the closer the connection is between the land and its inhabitants.  This is an ongoing struggle between man and the environment to see who will rule.

The rhythm of the film is one of continual observance without comment, where kids know one another since childhood, including their future marriage partners, where so many teenage girls are seen sitting around with young babies in their laps and where testosterone-driven boys aggressively taunt and challenge one another as a matter of routine.  When the water is present, the ranches can operate, though families make daily trips to the storage wells as do the livestock, initially seen standing in the plentiful reserves, which quickly diminish over time, forcing ranchers to continually search for new water supplies until they all completely dry over, leaving nothing to live on and a landscape littered with the presence of death.  Interestingly, the desolation of the region leaves it unsoiled by the larger narco drug trafficking wars wreaking havoc with the rest of Mexico, as marijuana or poppy plantlife will not sustain itself here, and even if it could, the openness of the region is accessible to all, leaving noplace to hide anything of value.  When a census worker comes to ask a woman what possessions she has, a trace of sarcasm can be heard in her voice when she answers “We have nothing.”  So what they do have is another precious commodity—time, creating close-knit families who can actually sit down and talk to one another, where everyday they spend time with their families and grandparents.  The relationship with water can manifest itself in strange and mysterious ways, where they play a card game known as entripar where whoever loses must drink two glasses of water until they get sick, where one boy is seen running outside the house to vomit.  In other images, water is used by the Priests to baptize the young children, to purify and bless their futures.

In good times, the community turns to sporting events, always involving horseriding, where there’s nothing like watching teenagers scope one another out on horseback.  One of the major events is a horse race celebrating the baptism of children, dramatically presented here, where the rivals are such equals it is impossible to tell the winner, where fights between families break out, likely fueled by plenty of beer drinking and a bit of wagering ahead of time, even targeting the director and his film crew, turning into a bit of a fiasco. When the water supply ends, however, livestock begin to die, where ranchers and their families can do little more than watch the skies for signs of rain, where abandoning their homes is an accepted reality, turning into Depression era images of The Grapes of Wrath, where truckloads filled to the brim with children and vital possessions search for makeshift communities near water supplies where presumably (since the camera doesn’t follow) they survive in hobo camps reminiscent of the 1930’s.  Once the winds pick up and a surge of lightning fills the darkened skies, hail and rain literally plummet from above, breathing life back into a scorched earth and the life cycle begins all over again.  The director is overly fond of an especially primitive sounding music heard throughout by Pablo Tamez and Matias Barberis, apparently 1970’s a capella trio recordings of cantos cardenches, a particularly authentic style of folk song where one might recall impoverished church choirs of only a few singers, where hymns often have the ache of rural desolation in the weary voices.  There are some hard to view images and queasy moments where viewers may feel helpless to the dire circumstances, but the director is unsparing in the visual scope of his objective eye, where overall he artfully projects the unique harshness of surviving in such an arid and isolated region.
Posted by Robert Kennedy at 12:55 PM