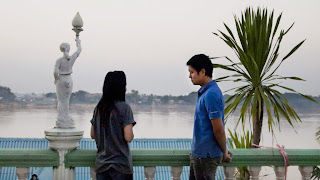 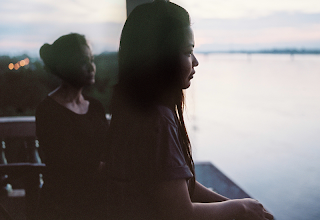 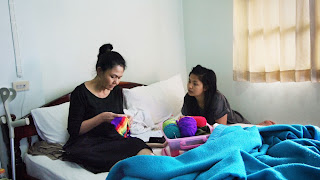 Don’t look for camera movement in this film, as there isn’t any, but it does continue the director’s fascination with actress Jenjaira Pongpas that goes back to SYNDROMES AND A CENTURY (2006), still, arguably, the director’s best effort.  This film takes place entirely on the premises of the Mekong Hotel in northeast Thailand, an upscale resort with a balcony overlooking the Mekong River, perhaps the real subject of the film, with the banks of Laos seen on the far shore.  With no backstory to actual events in August 2011, the film was shot just after heavy rains caused disastrous, months-long flooding by the Mekong River (see photos here:  Worst Flooding in Decades Swamps Thailand - In Focus - The Atlantic), where reportedly 37 villages and up to 5000 homes were destroyed in the floods.  You’d never know any of this initially, as the camera has a quiet, meditative gaze at the river gently flowing downstream, with classical Spanish guitar blues and jazz accompaniment from Chai Bhatana, who is seen briefly chatting with the director before resuming his performance, which may actually have been his audition, eventually playing a guitar improvisation throughout the entire length of the film, initially gorgeously atmospheric, but overused, becoming tedious by the end.  There’s an introductory bit of flirtatious banter between Phon (Maiyatan Techaparn) and Tong (Sakda Kaewattana) on the balcony, as if they’re just growing attracted to one another, giving the film a romanticized view of the hotel.  But we eventually learn they are already lovers, where Weerasethakul's gentle style is so rhapsodically slow that viewers can altogether miss the most bizarre occurrences, where Phon communicates with her dead mother, Auntie Jen (Pongpas), but is viewed onscreen like any normal person, knitting furiously while chatting with her daughter.

Jen is described as a Pob spirit, perhaps a malevolent Thai spirit that feeds on humans and livestock, which is in evidence several times during the film, often to humorous effect, where we see spirits secretly gorging themselves, much like wild animals.  Like most recent Weerasethakul films, this self-described essay, or “a contemplation on making a fiction,” also weaves its way between the realism of a documentary film and the fictionalized realm of the supernatural, where at one point we hear “Nobody questions the existence of the spirit,” a Buddhist reference to the living and the dead coexisting in harmony.  Within this setting we hear TV broadcasts mention a catastrophic flood ravaging through Bangkok, where Jen recalls disasters in her youth, the 1970’s armed conflict between Communist Laos and Thailand, when she was an 18-year old girl being trained by the Thai government to shoot an M16 rifle, claiming she was a good shot, where a flood of refugees crossed the border into Thailand to escape the military grip of Communist rule. In each generation, past and present, the suggestion is the government’s handling of disasters is inept, where the insatiable appetites of the Pob ghosts can be seen as a metaphorical reference to the government’s own insatiable greed and corruption.  Written, directed, filmed, and produced by the director, the sparse dialogue spends too much time with ghosts exploring similar territory as earlier films TROPICAL MALADY (2004) and UNCLE BOONMEE WHO CAN RECALL HIS PAST LIVES (2010), never really registering the devastating human impact of the flood raging outside.  Continuing his languorous style, using exclusively static shots, the film settles its reverent gaze upon the river itself in extended final shots, where the modernity of jet skis on the river ultimately sets the tone for the relative indifference of the present.
Posted by Robert Kennedy at 11:39 AM