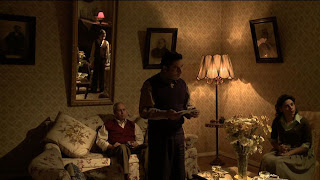 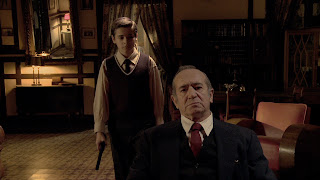 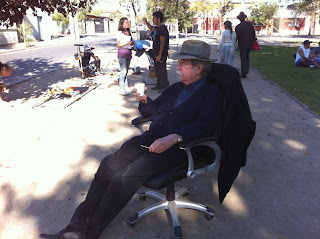 director Raúl Ruiz on the set

In the manner of Manoel de Oliveira, the aging 100-year-old-plus Portuguese director who won acclaim for his film INQUIETUDE (1998), listed as film critic Jonathan Rosenbaum’s favorite film of the year in 1998‎, but when shown at film festivals generated more walkouts than any other movie, as the detached uninvolvement and heavily stylized artificiality is not for everyone.  Subsequently, for many, this will be like watching paint dry, despite the ringing endorsement from many critics who suggest this is the director’s swan song, having passed away shortly after his 70th birthday from complications of a lung infection following a liver transplant in 2011.  With Raúl Ruiz, who made over 100 films in his lifetime, you have to know what you’re getting yourself into, where speaking personally, the only films really liked are THREE LIVES AND ONLY ONE DEATH (1996), starring Marcello Mastroianni in different roles, and Catherine Deneuve in GENEALOGIES OF A CRIME (1997), both of which are highly inventive yet remain approachable.  When he starts adapting literary sources, like Proust in TIME REGAINED (1999), or this film adapted from a selection of Chilean writer Hernán de Solar’s most popular children's stories in Across the Night, the result is so literary that the experience is consumed with reading subtitles, where there’s so much dialogue that you’re literally reading a movie instead of watching it.  The exaggerated, absurdly mannered style may amuse some, but to others the emotional detachment is so severe it resembles mannequins walking across the stage.  Like de Oliveira’s INQUIETUDE, which was a tryptich of three stories with a touch of surrealism, this also has a dreamlike interconnecting thread of multiple storylines.  The film is largely a riff on the art of storytelling, where the writer may be infinitely more absorbed in the process than most viewers will ever be, as the style is simply too abstract.  This generated many walkouts as well, so before venturing, one might suggest a familiarity with Ruiz or a curious interest in searching out films that are something altogether different, except for de Oliveira, where in this case they are kissing cousins.

Honestly, it’s hard to see what people like about de Oliveira or Ruiz making films in exactly the same style as de Oliveira, as they are 100 % complete artificiality, without an ounce of realism anywhere to be seen.  OK, fair enough, sounds like it could be visually inventive.  Perhaps it is, except it is overloaded with dialogue throughout, as these are literary adaptations, so these guys don't like editing the words, so they're all there, which means you have a choice, either watch the screen and miss the subtitles, or read the subtitles and miss the screen.  But when you watch the screen, it's literally filled with lifeless characters that make Bresson seem melodramatic in comparison, as these are literally cardboard characters.  You could actually take a pair of scissors and cut them out of the frame and that's how they would look throughout—never changing, while the subtitles continue to forward endlessly throughout the entire picture with incessant monotonous dialogue. Rosenbaum loves this stuff, which is stiflingly pompous and elite, and among the most boring film experience anyone could have in a theater.  If you want to read a book, read a book, fine, but why should moviegoers be forced to read a movie?   It's reminiscent of Godard's shift in the late 60's from cinema to revolutionary slogans and phrases which felt like political indoctrination, feeling like someone is force feeding you something against your will.  Something inside has the better judgment to resist and reject what's onscreen, as otherwise it's actually closer to hypnosis.