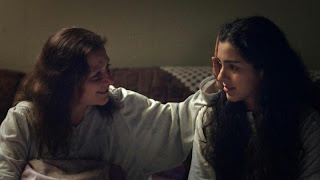 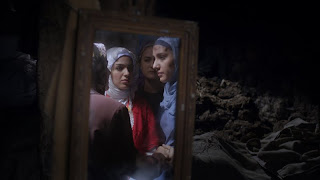 An exposé on Turkish culture within an Austrian film is quite a novel undertaking, an extremely detailed slice of life, unraveling like a Turkish Madame Bovary, another realist work that was the subject of obscenity attacks in its era, written in mid 19th century France.  Similarly, the religious backwardness ingrained in these small Turkish sects existing today almost in secrecy brings ancient customs and beliefs into stark contrast with the modern world.  The story revolves around the idea of Turkish husbands taking a 2nd wife, something outlawed in Austria, yet continues to be practiced, albeit infrequently, outside the gaze of unsuspecting government officials.  What starts out as a festive, wide-open, country wedding in Turkey (where perhaps money changes hands) soon takes a quick turn for the worse, as the alleged bride and groom, the beautiful young Ayse (Begüm Akkaya) and handsome Haslan (Murathan Muslu), are quickly ushered back to Vienna with Haslan’s mother Fatma (Nihal G. Koldas) where we learn the wedding is a sham, as Ayse is really the 2nd wife of Fatma’s husband, the aging patriarch Mustafa (Vedat Erincin), already with 5 children, where the two older grown daughters, perhaps more Austrian than Turkish, disapprove of the younger Ayse from the moment she enters the house, turning this into a claustrophobic chamber drama.  Written from a woman’s perspective by Petra Ladinigg embellishing the director’s story, this is a small scale, realist work that eventually becomes suffocatingly melodramatic.

The widescreen pan of the mountains of Turkey quickly give way to a secret, closed-off world that likely conflicts with Muslim practices as well, but are holdover family customs.  Fatma is extremely ill with cancer early on, as her condition is deteriorating with chemotherapy, requiring surgery, where she welcomes and embraces Ayse even over her own daughters, suggesting if anything happens to her, she wants Ayse in charge of her family.  Making matters more uncomfortable, the family must prepare a bed in the living room for the wedding to be consummated, where every sound reverberates through the thin walls, but Ayse is soon pregnant.  Like Cinderella, she is still treated within the family as a scrub lady, doing all the cooking and cleaning while everyone else has the freedom to live their lives.  Even when she visits the grocery store, she is labeled arrogant and snobbish by the Turkish women in the community for not engaging in the local women’s gossip, and she’s afraid to speak as she’s still learning the Austrian language.  Despite her best efforts to please her own family, she is constantly ridiculed and humiliated, as if she is the cancerous growth within the family.  The director, in his first feature film, plays on the audience’s expectations, offering a few plot twists that come unexpectedly.

Pitting the old against the new, raising relevant but often embarrassing questions, each generation has to face its own challenges, where you’d think Ayse might be steered towards other 2nd wives, many of whom might be undergoing similar resentment, each having no one they can turn to, as their very presence is an abomination in strict Austrian society.  The featured characters are Ayse and Fatma, as it’s really their story, where the performances of both are standout.  Director Umut Dag, of Kurdish descent, aided by cinematographer Carsten Thiele, displays a special interest in the plight of his female characters, effectively making a ‘women’s film.’  Not welcomed and faced with overly harsh options are typical immigrant stories, where the severe treatment often backfires, forcing characters into making more reckless choices they’d never otherwise have considered.  The small, baby steps that Ayse has been taking throughout the picture suddenly turn into leaps and bounds, as the film takes a strange turn towards the end, but one which is telegraphed throughout, sending tensions literally skyrocketing through the roof, becoming an intimate portrait of women’s hysteria, where Hell hath no fury like a woman scorned.  The film is a wrenching glimpse of the underside of humanity, often tightening the noose around their own necks when they become the arbitrary enforcers of morality.
Posted by Robert Kennedy at 12:03 PM