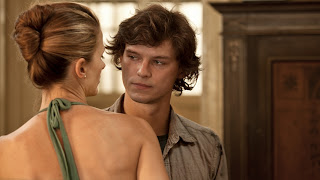 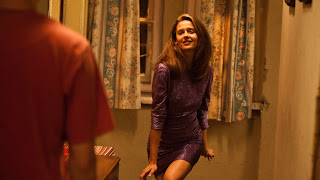 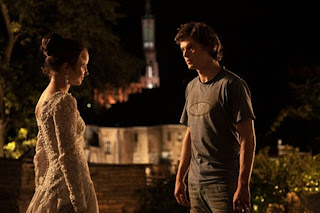 The opening credits reveal the screen title is actually Taboo, perhaps a more incendiary suggestion, but neither satisfies, as this film can never decide what it wants to be about, eventually losing its focus throughout, becoming a jumbled mix of at least two stories, where neither one is fully developed.  While the lead story is supposedly a scandalous incestual temptation between a brother and sister, Anka (Agnieszka Grochowska, looking anorexic) and 18-year old Tadek, Matthew Kościukiewicz from ALL THAT I LOVE (2009), a more interesting story is a developing look at vying social groups rarely seen together, neo-Nazi’s and Gypsies, both continually at odds against one another where there’s a seething level of resentment that is never explored.  Thrown off a train at the film’s opening, Tadek is a troubled kid that arrives without notice on his sister’s doorstep, where she’s not exactly overjoyed to see him, as she’s got something developing with a new boyfriend, Andrew (Maciej Marczewski, the director's brother), who instantly gets rude and cocky with Tadek, literally rubbing it in that he likes his sister, which Tadek resents, seething with an underlying jealousy, which only grows worse when they return home drunk and openly flaunt having sex.  Andrew is seen as a rising political star, the kind of guy that can get things done, but through favoritism, while he also seems to be at the head of the neo-Nazi groups in town where teen thugs are continually targeting Gypsies with random violent assaults.

Parallel to the brother and sister is a developing portrait of Irma (Anna Próchniak), easily the best thing in the film, actually upstaging the two leads, an attractive young Gypsy student, which itself is notable, as Gypsies are known for avoiding school, but also one that has designs on being a doctor, which is met by family derision, who would prefer she become a musician instead, or something more in the cultural tradition.  Her father, a Gypsy Godfather, seems to prefer that she simply get married instead, and has someone already in mind.  Irma, however, takes an instant liking to Tadek and flirts with him openly, which nearly gets Tadek roughed up by Gypsies who see him aligned with the thugs that attack them.  With no backstory to this underclass rivalry, it simply exists, though the viewer may not understand why.   In much the same way, Tadek has a tendency to peep at his sister in various states of undress, where there’s an underlying attraction, the root of which we are never told.  Tadek thinks all the guys she sees are losers, but largely because he wants her for himself, which makes him appear mentally unstable, as having designs on your sister can’t lead to anything good.  Anka seems to understand this and makes repeated attempts to kick him out, as having him around with boyfriends is just asking for trouble.  When Tadek discovers Andrew at home screwing a prostitute, he makes a public scene drawing attention to the moral hypocrisy (while secretly hiding his own), where Anka angrily kicks Andrew out of the house.

In the absence of anyone else, there are moments when the siblings get too close for comfort, where Tadek openly confesses his love, suggesting he wants things the way they used to be, where she doesn’t stop and knock some sense into the kid right then and there, instead she likes the attention, even if it comes from her brother.  But when she gets back with Andrew later, apparently forgiving him, Tadek gets a little crazy, becoming completely possessive to the point of disturbance.  It all comes to a head when a political heavyweight comes to town to honor Andrew for funding a sports stadium, an event where liquor is flowing and Anka gets dressed up in honor of the special occasion, but when Andrew tries to use her as a special favor in exchange for a political position, she’s had it with Andrew and his personal ambitions.  What eventually surfaces, narratively, are mirror images between two women from differing backgrounds, both victims of male subjugation, where Irma is urged to drop her career plans, coerced into marrying someone her father likes, while Anka is used as sexual bribery by a boyfriend, and the object of complete possession by her own brother.  What options do these women have?  One would think Irma was on the right track, as education is power, leading to self-reliance and better economic options.  What’s unaddressed by the film is the need for female protection, where Irma falls under the protection of her father if she does what he wants, as without it, she’s subject to continual harassment and debasement as a Gypsy, where a male dominated Eastern European society has little incentive to intervene and offer either one protections.
Posted by Robert Kennedy at 10:16 AM