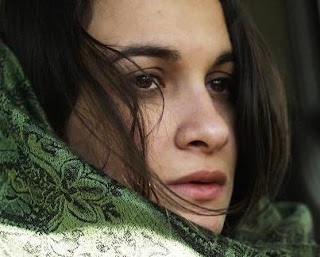 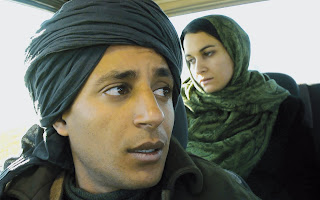 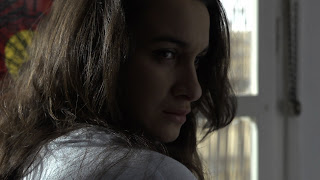 Because there are not many films made in Algeria and the region, directors have always felt an obligation to explain everything in their films, perhaps to over-explain…I felt compelled to make this film, because the young generation, even the young actors I employed do not know much about the past. It’s being hidden and I believe to move forward we must talk about the past and come to terms with it.
—Merzak Allouache, director

Because of Algeria’s recent troubled history, the government has disallowed films with explicit political content, but this is a barebones, thinly disguised, historically relevant film written and directed by veteran Algerian filmmaker Merzak Allouache, who has been making features since the late 1970’s.  Part of the dramatic power of this movie is how little expository information is provided, yet Mohammed Tayeb Laggoune’s superb handheld camerawork throughout offers a better understanding of Algeria than most any other films we’ve seen, using a near documentary style reminiscent of Abbas Kiarostami, especially the long drive taking us through tiny towns in the rural countryside region, something we’ve rarely encountered before.  In 1999, after 8-years of civil war and more than 200,000 dead, the Algerian government attempted to end years of terrorism by offering Islamic jihadists amnesty, where fighters who came down from their hideouts in the mountains and registered with the authorities were called “repentants.”  The idea was to fully integrate them back into society, but they were often met with community outrage, as many local families felt these fighters were responsible for the deaths of their children.  The return of these men who had been exposed to radically unorthodox underground military techniques was often met with hostility and violence, where some were hauled out of their homes and publicly murdered on the street.  Opening in the vast expanse of a barren snowy wilderness, the film follows one such man, jihadist Rashid (Nabil Asli), who initially seems too young to be taken seriously, but he is a man of few words.

Once word is out that Rashid has returned, neighbors congregate around him, with one in particular blaming him for a murderous assault in town years ago taking the lives of several children, where despite his denials, some are convinced he was part of the raid.  He is protected by the police, however, according to the amnesty law, which finds him a job as well, where Rashid serves coffee in a local café.  As days and weeks go by, he seems like any kid his age, where he enjoys watching soccer on TV and has his eye on every girl that passes by.  His quiet demeanor is mystifying, as he’s a hard read, rarely uttering a word to anyone, attempting to lead a normal life, yet the owner notices unexplained absences from time to time.  Politics are barely mentioned in this film, as except for the initial outburst, no one speaks of the past and background details are absent, where the less said, the more intense is the underlying tension carrying some unbearable weight, where the close camera scrutiny and the attention to detail is impressive.  The mood only grows more intense when we meet the local pharmacist Lakhdar (Khaled Benaissa), a man living in a meager apartment with bare walls, drinking wine and watching Chinese language television alone at night as a way of numbing his existence.  He receives a call, presumably from Rashid, that immediately gets his attention, calling his wife Djamila (Adila Bendimered), where there is plenty of inexplicable anger between them, as if there is an exposed rift a mile wide, where only later do details emerge.

The film is largely seen through a jihadist’s eyes, where despite honest efforts, they may never fully integrate back into society, as there is a similar deep-seeded chasm, especially since they are the vulnerable to exposed attacks when they return, as opposed to working as a collective unit in the field.  This different psychology creates an underlying dread upon return, awaiting death threats to materialize, where a growing sense of anxiety only rises, and there’s an uneasy alliance with the police who persist on wanting information, threatened with arrest at any minute.  Precipitous events change Rashid’s plans, especially after someone attacks him with a knife, which he in turn uses against his assailant.  Not expecting justice or mercy, like a thief in the night, Rashid disappears, where according to his landlord, “He comes, eats, kills, and leaves.”  Leading both Lakhdar and his wife on an extensive drive through the empty hillsides, Rashid agrees, for a price, to point out their daughter’s grave, an act so vile in the mother’s eyes that her rage boils over on several occasions, becoming the central emotional focus of the film, as her rage reflects the unspoken rage of a nation.  Algeria remains a country trying to forget the hatred and bloodshed, but undercurrents of violence and fanaticism still remain.  Filmed in just 20 days on a low budget, the director strips down the story to the bare essentials, where the tight-lipped information (set up through one-way phone calls) and emotional weight of memories (Djamilah’s remorse) beautifully set up the dramatic finale by rigorously establishing throughout such a realist and unpretentious tone.
Posted by Robert Kennedy at 1:09 PM