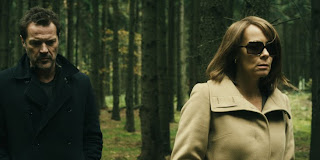 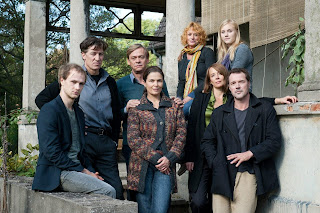 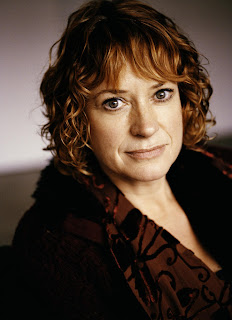 Nina Grosse has mostly directed TV movies, so there’s nothing that suggests she is remotely qualified to tackle this material, based on a novel by Bernard Schlink that she allegedly rewrote, basically removing nearly all political content, in a film re-examining the effects of the RAF activities during their reign of terror from the 1970’s to the late 90’s in Germany, as viewed from the present when revolutionary talk is no longer in the air.  Sebastian Koch plays Jens Kessler, released after spending 18 years in prison for activities that are never named in this film.  A small collective prepares to greet him, but with extreme trepidation, as their lives have taken such a reverse course from their youth, becoming part of the complacent, petty bourgeois, middle class, the  status quo that they were once railing against.  Feeling guilty over their transition from radicals to capitalist consumers, no one wants to be reminded of the indiscretions of their youth.  Kessler’s release, however, does exactly that.  His sister Tina (Barbara Auer) has purchased a country home in what was formerly East Germany, getting a good deal as housing prices remain cheap, but the squabbling couple of the opening is a former girlfriend now married to someone else, Inga (Katja Riemann) and her husband Ulrich (Tobias Moretti), where Inga appears to be in shock at the idea of a mandatory visit and hastens to find an alternative excuse to quickly excuse themselves.  The enormous home and spacious grounds feel more like a retreat and couldn’t be more blended into its natural elements, where the back yard leads to an actual forest.  For whatever reason, in films portraying Baader-Meinhof or RAF radicals, they always live in these luxurious surroundings, an odd comment on their anti-capitalist politics, as it would be unthinkable and impossible, for instance, to see the Black Panthers living in such lavish wealth.

When Inga and Ulrich arrive to this little welcome home party, followed by a journalist who wrote a book about the movement, Henner (Sylvester Groth), the initial impression is that they have all completely moved on with their lives, but Kessler is an unsettling presence, as he’s still living in the moment of his arrest, feeling irate that he was set up, holding fast to the same principles and revolutionary attitudes of the past even as there is no link to anyone in the present.  While there are various socialist parties existing in Germany today, Kessler never mentions any of them, but continues to live in the past as if that radical world still exists, as it does in his mind, where he spends most of the visit sitting outside alone smoking cigarettes, avoiding social contact.  The actual conversations together have an absurdly ridiculous feel to them, as Ulrich attacks his pompous arrogance for continuing to believe they were anything other than killers, while Kessler angrily calls him a reactionary, where the reunion turns into an adolescent rehashing of personal insults, where the director’s focus written throughout the re-written screenplay appears to be an insistence that radicals apologize for their past sins.  Kessler, on the other hand, feels no remorse, and in this film version the viewers aren’t even allowed to know what sins he committed, which is a superficial whitewash of history.  Instead of any intellectual discourse, which would likely be the real subject of such a gathering, this turns into a dysfunctional family melodrama, as soon the children enter into the story, which completely changes the overly somber and self-absorbed tone of the movie, where Kessler at one point says “I feel like I just lived through my funeral.”
Without being invited, Inga’s daughter Dora (Elisa Schlott) arrives on the scene, a seemingly shallow blond with a groupie complex about her father, where to her it’s all about slogans and massive protests, where her father is more of a name emblematic of a commodity, like a Che Guevara T-shirt, where the past has a thoroughly sanitized but heavily romanticized aspect about it, as if those were the good years, unlike the present where no one believes in anything anymore but themselves.  Her over-protective and indulgent middle class lifestyle is in stark contrast to Kessler’s radical views.  Dora summons her brother Gregor (Robert Gwisdek), who has been mentioned and forgotten by his parents in the same sentence over the weekend, but his entrance into the family proceedings couldn’t be more boldly ostentatious, and it’s the only moment throughout the entire film that has any level of theatrical tension or unpredictability, as he bitterly hates his father with such a vengeance, it’s like Hamlet going after his stepfather, as the kid feels like he’s been wronged and he vows amends, literally challenging the masculinity of this legend of a man, attempting to undermine his stature in a clever but vehemently wicked manner.  What has to be running through the viewer’s minds is the idea that these spoiled and ungrateful children are a reflection of the failed politics of the past, where the chickens have come home to roost, literally deflating the idea that Kessler actually stood for something.  But in truth, their shallowness more accurately reflects the mindset of the filmmaker who hasn’t a clue what she’s dealing with here, turning the idea of radical politics into the Days of Our Lives.
Posted by Robert Kennedy at 1:04 PM