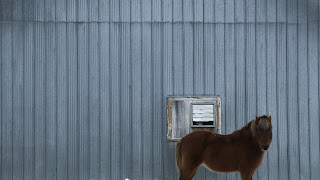 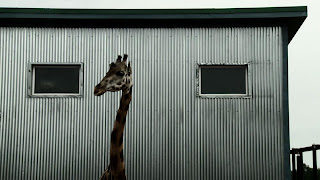 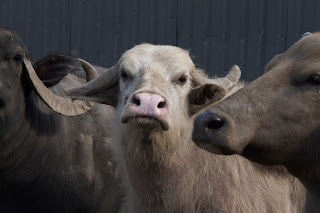 This film is no fiction, obviously. However, if it were a documentary, there would be a “subject.” Also, to describe it as an “essay” would entail a polemic or partisan implication, corresponding to the proper literary term. Cinema has come to label this genre of proposition as “object.” I don’t know how to label it myself, and even better, if this film is difficult to subsume but poetic at the same time. I started out with a naive desire to explore certain energies and to observe the relations or maybe even the failed encounters between humans and animals. In the end, this film is about contemplation — and something else. Something indefinable, something more obscure which I hope to find out more about with the help of the audience.
—Denis Côté from the film’s press kit (press-bestiaire)

Midway between Plattsburgh, Vermont and the city of Montreal in Canada, a distance of 60 miles, lies Parc Safari (home - Parc Safari), an animal and amusement park founded in 1972, featuring both an African and Asian species of elephant, but none of those details matter in this visual essay, a wordless and minimalist work that refuses to explain anything, but instead simply observes without judgment, accumulating detail over time.  Similar to Le Quattro Volte (The Four Times) (2010), the camera wordlessly gazes upon a world largely unfamiliar to us, where at least part of the distinguishing attempt here is not to embellish or beautify what we see, or even allow preconceived knowledge or understandings to interfere with the director’s mission, which is to observe human behavior through the unpretentious eyes of animals, and vice versa, both seemingly on equal footing.  A key factor in making the movie is to allow the mind to remain completely unpresumptuous throughout, where an unquestioned reality seeps through unfiltered, where neither species has an unfair advantage.  Like the Cahiers du Cinéma magazine writers who became filmmakers during the 60’s French New Wave, Côté is himself a former film critic from Montreal.  A champion of small and unconventional films, he redefines the viewing experience by infusing his films with a certain objective detachment.  Opening in the dark with the sounds of pencil on a sketch canvas, we quickly see a handful of art students *studying* something that stands before them, each scrutinizing the subject, gazing intently, before they return to the canvas.  What they’re eyeing is an artificially preserved deer, an example of the kind of wildlife you might see in national park visitor centers, mysteriously bringing the stuffed animal to life on canvas, where one would never know if the original subject the artist is rendering was real or imaginary, as it takes on new life in the eyes of the artist.

Unlike groundbreaking directors like Tarkovsky or Bresson, Côté is not looking to transform the art of cinema, but seems content to stake out his claim for something imprecise or undefined, as the director has radically argued his experimental film is not a documentary.  Railing against the popular success of warmly humanized animal documentaries like WINGED MIGRATION (2001) or MARCH OF THE PENGUINS (2005), which create lovable subjects in the eyes of humans, turning animals into a form of human entertainment, much like soft, cuddly puppies, the director instead uses long-held, static camera shots gazing at animals as they often stand there gazing back at us.  Other times the camera may find animals simply staring out into empty space.  In each instance, no action is visibly happening onscreen to capture the attention of the viewer, but one grows curious about the surroundings, which are anything but natural.  In what must be approaching feeding time, a lion in a cage compulsively bangs against the locked door, like one of Pavlov’s dogs, as if demanding that the door be opened bringing food, where the sound is heard even after the camera shifts elsewhere, but the film instead offers no explanation other than the sight of a lone zoo employee standing nearby ignoring the commotion.  Initially the outdoor shots feature animals in the snow, like a small group of horses assembled together against a corrugated tin building, some only partially in the frame, moving about until there is only one staring directly at the camera, using no accompanying music, only natural sounds, as seen here:  Bestiaire (Dir. Denis Côté) Trailer - YouTube (1:29).  Only with the addition of more animals, like a small group of buffalo, does the audience realize this is a large scale zoo, mixing indoor and outdoor shots, mostly animals alone, many of them caged, where by spring, off in the distance with the grass suddenly turning green, a herd of elk may be seen running freely.

After a fade to black, the camera is suddenly in the cramped studio quarters of a group of working taxidermists, with stuffed animals scattered about, also pieces of animals hanging on the wall, like antlers or horns.  One man is meticulously reconstructing a duck, which is a painstakingly slow process, where initially the animal isn’t even recognizable.  It’s an odd comment on animals, suggesting a bizarre afterlife, but ultimately it seems to say more about humans than animals, as they have a need to preserve life after death, even in an artificial form.  Obviously, in the more open outdoor space, thought is given to separate the caged predator cats and tigers from the zebras or impalas that roam free, but there’s no aesthetically designed space.  Most of this resembles the disorganized look of a working farm, with rutted tire tracks everywhere, random objects stacked in piles, where off in the distance touring cars are seen driving through the grounds with the arrival of summer.  With nothing resembling a carefully designed structure suitable for animal interaction, where they can move about hopping onto something resembling their natural habitat, instead we see a lone gorilla sitting on a dilapidated wooden structure, immobile, gazing at nothing until a couple with children walks into the frame, where the two have an animated discussion, even a kiss, where the viewing attention turns to them instead.  Just as quickly, the presence of people completely disappears during a rainstorm, but zebras still delight in seemingly having the entire outdoor grounds all to themselves.  There are no commercial shots of the concession stands or the children’s games, amusement rides, or the miniature golf, anything that reveals the mundane nature of the actual business operations.  Instead it’s a more isolated, free associative and contemplative film, observing a lone giraffe standing up against another corrugated tin structure, or a solitary elephant walking through the vast landscape, a stark contrast to the prevailing view of elephants living in the harmony of tight-knit family groups, unfathomably dwarfed by the emptiness of the wide open spaces, somehow questioning the meaning of it all, much like the existential dilemma facing mankind.
Posted by Robert Kennedy at 8:22 AM