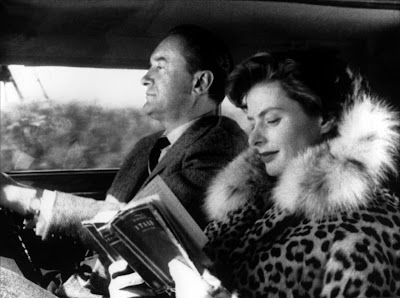 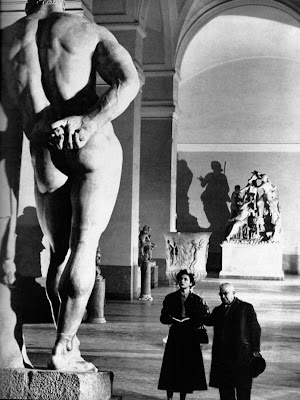 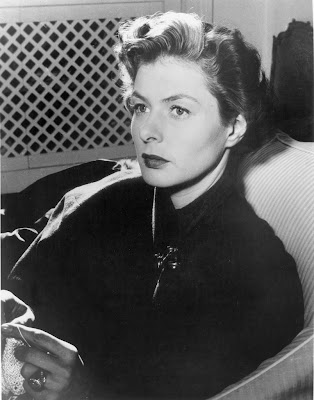 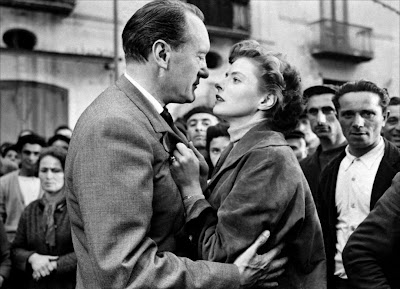 After eight years of marriage, we don’t know anything about each other.
—Alexander Joyce (George Sanders)

Temple of the spirit.
No longer bodies,
but pure ascetic images,
compared to which thought itself
becomes leaden, opaque, heavy.
—Charles Luyton

All men are the same, cynical and cruel.        —Katherine Joyce (Ingrid Bergman)

This may be the original love and/or divorce among the ruins film, very much in the manner of Rossellini’s GERMANY, YEAR ZERO (1948), which was set in the devastating post-war ruins of Berlin, Germany, at the time a physically and morally crushed society, where the near documentary horror of setting a story among the actual rubble and debris of war is a shockingly realistic technique, infusing real life into an otherwise fictional rendering.  This same method was masterfully utilized by Abbas Kiarostami in his Earthquake Trilogy (1987 – 1994), writing a fictional narrative set among the disastrous aftereffects of a horrific earthquake that killed more than 50,000 people.  Rossellini himself was the product of a wealthy Roman family, working for Benito Mussolini’s Fascist-controlled movie industry in the early 1940’s, even co-writing screenplays with his son, Vittorio Mussolini, where his earliest work was a Fascist Trilogy, films that amount to little more than war propaganda.  It was only when the Fascist regime collapsed in 1943 that Rossellini resurrected his career and helped form the Italian Neorealism Movement with the anti-Fascist OPEN CITY (1945), the first part of his landmark War Trilogy.  JOURNEY TO ITALY represents a major shift in Rossellini’s work in the 50’s, where his realist focus on working class issues move to middle class protagonists, giving way to an interior psychological world later accentuated by Michelangelo Antonioni, who specialized in creating a sense of space between characters in order to heighten the emotional distance.  Both directors have a major interest in framing their films through architectural doorways or hallways, almost as if the camera is peering at the characters through the prism of history and civilization.  However at the time, the film flopped at the box office and was not well received by critics due to the departure from what was commonly understood at the time as neorealism, though Rossellini brilliantly extends the truth of realism to include the boredom and banality of otherwise comfortable middle class lives.  The radical and influential nature of the film was discovered by the New Wave French Cahiers du Cinéma critics, especially Jacques Rivette, who wrote in his essay on Rossellini, “If there is a modern cinema, this is it.”

The film reflects a crumbling relationship between a middle-aged married couple, Alexander and Katherine Joyce (George Sanders and Ingrid Bergman), while also serving as a travelogue of the Italian cities of Naples, Capri, and Pompeii.  The opening shots have a thoroughly modernist feel to them, initially accentuating the road to Naples, where the highway and the view on one side of the road can be seen and heard whizzing by.  These establishment shots have no dialogue or music, but exist totally in a netherworld of cinema, links to which extend to other films, like Tarkovsky’s extended car sequence in SOLARIS (1972) Solaris Full Highway Scene - YouTube (4:43).  This introduces Enzo Serafin’s memorable camerawork, while the first glimpse of the couple is ironically amusing, as Katherine is wearing an outrageous, almost pretentious looking faux leopard skin fur, something only the wealthy would ever consider wearing, as they approach Naples driving a luxury model Rolls Royce.  Already bored with each other, this English couple has driven to Italy to combine a vacation with the selling, sight unseen, of a recently inherited Naples property from Alexander’s uncle.  Of course, the moment we see the gorgeously elegant estate, one wonders why anyone would sell such an idyllic Italian villa, showing an air of haughty class contempt by the very idea, expressing little interest in the history of how it came to be part of his family.  One noticeable problem is that the actors are dubbed, so it is not the bored inflections of Sanders and Bergman that we hear, but uncredited others.  Interestingly, Rossellini uses transitional shots much like Ozu, using landscape pans, offscreen sound, often including someone singing, and other natural elements to add heavy doses of realism throughout.

Loosely adapted from the uncredited 1934 French novel Duo by Colette, as Rossellini was unable to secure the rights to the book, the setting has shifted from the south of France to Naples, one of the oldest inhabited cities of the world, where the connection to the past is inevitable, as there are historic sites everywhere, where the intimacy of the camera keeps the audience connected to the city of Naples, along with its picturesque bay, nearby islands, looming volcano, and the nearby site of Pompeii.  With the couple drifting apart, Alexander immediately takes refuge with the upper class socialites living in the exclusive setting of Capri, feeling more at home in the company of others than his own wife, as he’s more used to a pampered life of the rich, seen constantly feeding themselves and plying themselves with alcohol, carrying on endless conversations that are little more than gossip and utter contempt for the lower classes.  Through Alexander, there are continual signs of an upper crest bourgeoisie proudly displaying their flattering titles, with enormous and luxuriously decorated estates, where they are continually seen walking among statues and relics, all signs of a dead civilization, as if they themselves are lifeless forms of a forgotten era.  While Alexander indulges himself, Katherine spends her time driving through the streets of Naples, seen teeming with a life and energy she all but ignores, revealing a street peasantry that knows what it means to live and struggle every day of their lives instead of sleepwalk through it like the idyl rich, choosing instead to seeking out various museums where she hears history explained through various tour guides.  Interestingly, however, in the moments when she’s driving alone, she carries on an inner dialogue throughout of fury and disgust, continually raging against that loathsome husband of hers, growing disgusted with his snide indifference.  And while these inner thoughts are reflective of her psychological turmoil, they are also among the most bitter sequences of her career.


It is through Katherine, however, that we discover Italy, through her endless travels to museums and historical sites, enriching our own knowledge of history right alongside her, while at the same time she becomes obsessed with seeing lovers everywhere, along with pregnant mothers, babies in strollers, and other signs of domestic bliss, all the things missing in her life.  As Alexander enjoys la dolce vita, going to endless parties and flirting with beautiful women, there are idyllic panoramic images of unsurpassed beauty and enchantment, a collection of white houses and villas on the rolling hills of Capri surrounded by the sea, a reflection of a perfect age, which are in stark contrast to Katherine’s hostile inner thoughts of hatred, believing her husband to be arrogant and selfish, and a thoroughly despicable man, something in parallel to the histories of the ancient Roman emperors, each with glaring characters flaws that destroyed their reign.  But as Katherine continues to visit famous sculptures, the Naples catacombs, and the ruins of Pompeii, there are continual references to the dead, where she begins to feel smothered by the overwhelming presence, fearing thoughts of her own impending mortality.  Often recalling the poems of a young man Katherine once knew, birth and death themes run throughout the film, accentuating a pervasive, all-encompassing homage to the dead, where people make pilgrimages just to look at thousands of year old preserved skulls and corpses, where the dead in many ways are more honored than the living.  The gradual accumulation of everything she experiences eventually takes its toll, especially when she and her husband observe a live Pompeii excavation uncovering a husband and wife embraced in each other’s arms at the final moment of life, a transcendent life and death revelation that literally takes her breath away, leaving her dumfounded by her own undescribed emotions.  While the pageantry of a melodramatic finale may be overly contrived and unconvincing by today’s standards, with the couple’s feelings suddenly surging back to life, it nonetheless retains an element of poetic ambiguity where life remains a mystery, an urgent reminder of the unforeseen consequences of the living and the dead, where Rossellini’s film remains a blueprint for so many other films to come, like Antonioni’s L’AVVENTURA (1960), Wong Kar-wai’s HAPPY TOGETHER (1997), and Richard Linklater’s Before Midnight (2013).
Posted by Robert Kennedy at 2:05 AM