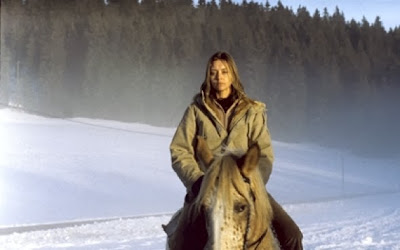 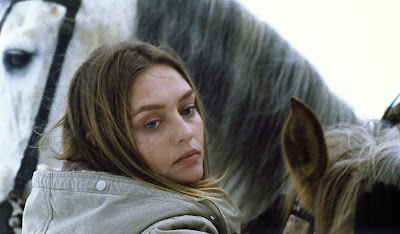 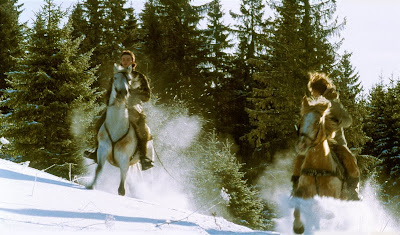 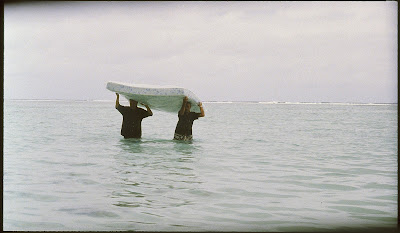 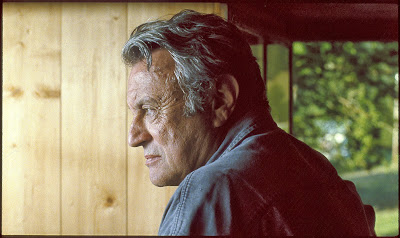 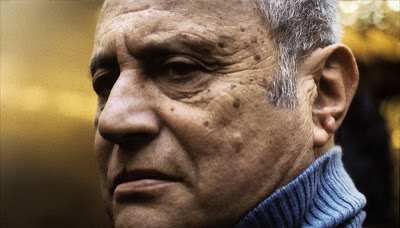 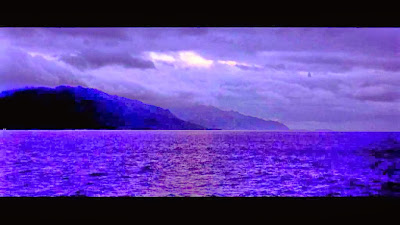 An example of utterly fearless filmmaking, Claire Denis has crafted a masterwork that is unlike any other, perhaps recalling the probing, atmospheric density of Wim Wenders UNTIL THE END OF THE WORLD (1991), an ultimate road movie that was filmed in 15 cities in seven countries across four continents, while here a similar epic reach may all be taking place inside someone’s head, yet is expressed through external visualization that couldn’t be more ravishingly beautiful, shot by Agnès Godard at her masterful best, where no single shot approaches visual cliché, just as no single edit fails to surprise, where this film rivals and may even top Beau Travail (1999) for sheer originality.  What everyone can agree upon afterwards is that this is a headscratcher, as few can follow a near incoherent storyline, yet that is the mastery of the film, leaving out gaping holes in the storyline, where the filmmaker provocatively challenges the viewer to connect the dots on their own.  What little we do know is established at the outset, taking place in the deep woods of the Jura mountains along the French-Swiss border, where Louis Trebor (Michel Subor in perhaps his greatest role) lives with his dogs, who offer an enthralling presence in the film, often seen in a heightened state of alert where they live in harmony with the natural world.  Louis loves his dogs more than his own estranged family, never seeing his own grown son Sidney (Grégoire Colin) who lives nearby, and is himself a proud new father.  According to Denis in an interview with Gavin Smith, Claire Denis interview | Film Comment, she initially intended to open the film with the son’s monologue offering a critique about his absent father, where the focus would quickly shift to being about the father, ending the film in an empty forest, with no people and no snow, with a resumption of the monologue, so the entire film was contained in that monologue.  But the actor Grégoire Colin had to leave to work on another film, so they were never able to make that happen.  Instead the film opens on Sidney’s wife Antoinette (Florence Loiret-Caille), who works as a border guard, where her drug sniffing dogs successfully find some smuggled contraband, returning home to a husband who has spent the day with two infants, happy to see his wife, becoming sexually aroused by her presence.  The film then quickly shifts to the older father living like a recluse in the woods.

The border region is seen as an open frontier where intruders continually attempt to sneak across under cover of the forest, where occasionally we’ll hear shots fired, but the storyline quickly cuts ahead without revealing any outcome, where Denis paints a picture of Louis as a vigorously healthy man in his seventies, seen swimming naked in the lake, biking the mountain roadways, or making love to a much younger woman in town, yet the discovery that he has a diseased heart radically alters his future, changing the entire dynamic of the film.  Initially envisioned as a three-part structure, the northern hemisphere, limbo, and the southern hemisphere, with each hemisphere a mirror image of the other, but Denis changed her mind when she realized Jean-Luc Godard’s latest effort NOTRE MUSIQUE (2004) used a similar format, Hell, Purgatory, and Paradise.  As a result, Denis collapsed her three-part structure into one extended dream sequence, where only the existing family seen in the opening, Louis and his son’s family, are real, while all others are a manifestation of his imagination, where people he had previously known in his life reoccur in his thoughts.  The idea behind the film is Jean-Luc Nancy's novel L'Intrus (2000), which was inspired by the author’s own experience recovering from a heart transplant operation.  Denis became fascinated by the idea of introducing a foreign “intrusion” into the body forced to fend for its own survival, oftentimes rejected by the host, even though the body needs it for its own survival, finding parallels with illegal immigrants crossing the border, as well as the mistreatment of foreigners, migrant workers, racial minorities, and those leading marginalized lives on the edge of society.  In Denis’s assured hands, this becomes a life and death issue, where survival depends upon a variety of complex conditions, creating the internalized conditions of reflecting back upon one’s life, even as one hopes to move forward.  Recollections are not necessarily in any order, as thoughts and time periods overlap, where one’s hopes and dreams often replace reality.

While this is easily Denis’s most extended vision, the only film to go past the two-hour mark, the path she takes is simply remarkable.  And while many will be confused by a lack of coherent narrative, many artists have used this exact same device, including Edward Yang in THE TERRORIZERS (1986), the third part of his urban trilogy, each one more increasingly experimental in form, reducing the narrative as much as possible, or Tarkovsky’s THE MIRROR (1975), which is autobiographical, told as an abstract, impressionistic memory piece, ultimately becoming a defiantly personal film.  Artists invent new forms of expression which are meant to challenge existing conventions, like Stravinsky, or Picasso, or atonalism, where Denis takes a Proustian plunge, utilizing a literary stream-of-conscious device to explore memory and consciousness, reflecting upon themes of guilt and moral transgressions, but also personal reconciliation and redemption, where one can be both haunted and inspired by dwelling on the past, creating a hauntingly beautiful dreamscape that plays out like an epic Icelandic saga, told as an extended series of elongated poems that in this director’s hands retain elements of extreme realism, though lushly visualized as an abstract, near wordless tone poem.  The film is largely an articulation of man’s alienated existence as viewed through a deeply tormented subconscious.  Unable to reconcile the inescapable mistakes of the past, Louis remains deeply haunted by them, revisiting the places of his life, hoping for a different outcome, but plagued by the inevitable results.  Since Michel Subor’s original involvement with Godard’s essay on the Algerian War in LE PETIT SOLDAT (1963), he has been portraying the sort of intellectual and moral confusion that individuals have when confronting anguishing events in their lives, where the grizzled expression on his face couldn’t be more eloquently poignant.  The film also curiously stars nearby neighbor Béatrice Dalle as the Queen of the North Hemisphere,

Given an epic structure like Homer’s Odyssey, Louis begins his otherworldly journey by attacking an intruder trying to break into his cabin in the middle of the night, a metaphor for the metaphysical adventure he is about to embark upon, starting with a large payment for a black market donor heart to a young Russian girl (Katia Golubeva), who actually provides the opening narration, and with connections, one assumes, to the Russian mafia, asking for a “young man’s heart,” no questions asked, where some have called her “The Angel of Death,” as she actually shadows his movements for the rest of the film, and even comments upon his progress.  Perhaps the most startling transitions are scenes in the snow, much of which have a mythological resemblance to an illusory world.  A film defined by visual textures, Denis has called it “my vision of a dead man,” where during the shoot she asked Michel Subor to listen to the final recordings of Johnny Cash, which themselves resemble a harrowing near death experience.  When Denis wrote the script, she called him A Man With No Heart, a heartless man, stashing his fortune in secret Swiss bank accounts covering up his shady past, disassociating himself from his family, and becoming something of an eccentric Howard Hughes recluse.  The unseen operation moves the film to the Southern Hemisphere, drawing inspiration from Robert Louis Stevenson and Paul Gauguin’s trip to the South Seas, presented as an idyllic landscape in the Polynesian island of Tahiti in search for a new life where he might recover from his operation, yet his condition takes a turn for the worse and he’s forced to return to the hospital.  Complaining of his sick heart, it is the Russian girl who reminds him there’s nothing wrong with his heart except that it’s empty.  Including clips of Tahiti from Paul Gégauff’s unfinished film LE REFLUX (1965), starring Michel Subor four decades ago, the film is seen as an endless voyage of a man slowly dying, much like Jim Jarmusch’s DEAD MAN (1995), where one of the more memorable shots is an Antonioni Zabriskie Point (1970) style explosion of colorful streamers jettisoned off the bow of a newly christened ship in South Korea, which he buys for his voyage to Tahiti.  The endless sea odyssey provides an ocean vista featuring a horizon without borders, a pathway venturing into a world of multiple possibilities, yet eventually it’s accompanied by the apocalyptic music of Tendersticks that jars our senses awake with a hypnotic guitar loop as the camera simply drifts endlessly at sea.  Boldly mystifying and brilliant throughout, this is arguably the most lyrically sensuous film Denis has ever made, a film that traffics in the subconscious, taking us on an ominous journey exploring the mysteries in the heart of the unknown.