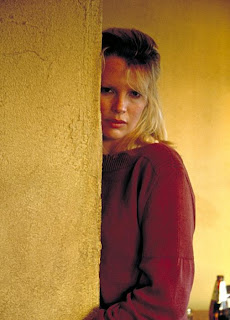 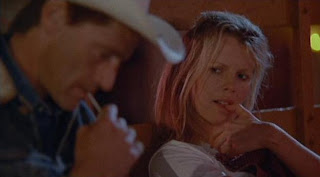 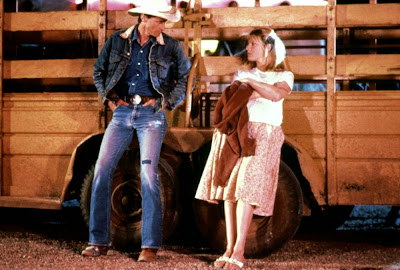 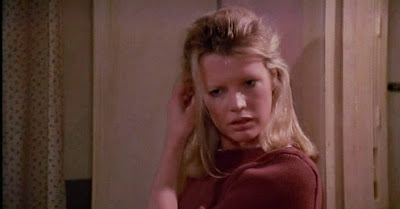 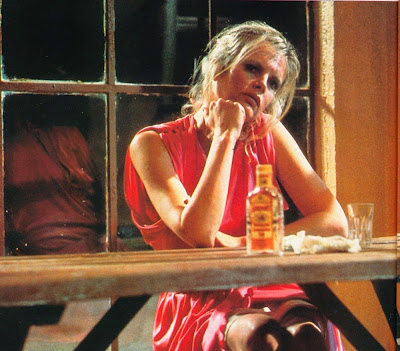 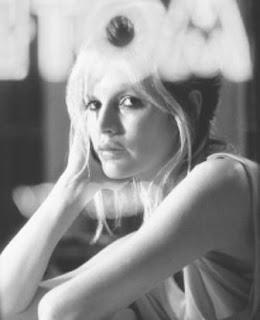 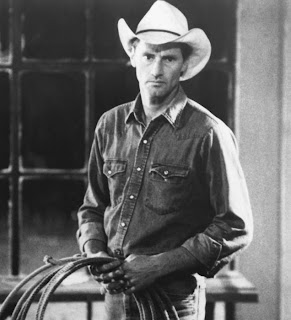 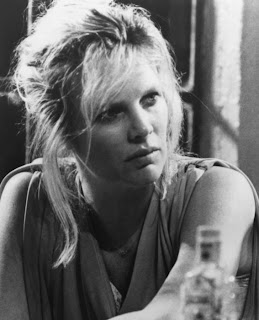 Having written award winning plays for nearly two decades, receiving the Pulitzer Prize for Buried Child in 1978, Sam Shepard never directed any of his own plays until Fool for Love in 1983, when he directed Ed Harris and Kathy Baker in the lead roles of a small production in San Francisco before opening off Broadway in New York a few months later.  Robert Altman spent the first half of the decade working in smaller budget movies outside the Hollywood studios, choosing to film a series of modern theatrical works in a naturalistic setting, where often the entire shoot consisted of a single set in a solitary room.  The director’s focus in these works is more restrained due to the cramped space, where the dramatic power of the performers unleashes itself with a flood of emotions that can barely be contained by such a restrictive environment, giving the impression that the characters feel straightjacketed.  Shepard seems to share this sense of confinement in his own life, as just two years earlier on the set of FRANCES (1982) he met lead actress Jessica Lange, effectively ending his own fifteen year marriage for this new lifelong companion.  His play Fool for Love seems to contain elements of this double life, starring lead characters who feel both smitten and star crossed, who are desperate for one another when absent, but miserable in each other’s company.  It was Shepard who wanted his play filmed and also chose to star as Eddie in the lead role, a lonesome cowboy at the end of an era, somehow out of place and out of time.  Much of the movie does take place in a single room, a seedy 1950’s roadside motel set on a lonely highway in New Mexico’s Mojave Desert where Kim Basinger as May is hiding out trying to find her bearings.  Unlike his earlier works, however, Altman opens up this claustrophobic confinement, allowing his characters to inhabit the real world outside, though it’s about as desolate and isolated as you could find filled with collectible articles of junk strewn around.  While the play focuses on the explosive energy of the tortured couple, the fools in love, as if the world could not contain their feelings, Altman creates a more dreamlike effect, complete with long drawn out flashback sequences narrated by intensely personal monologues, where confoundingly the narration does not match the images we see onscreen, causing a deeply unsettling confusion about what to believe.  Some in the audience may never regain that alienated disconnection with the material, but oddly enough neither do the characters onscreen.  Much of this movie is simply a bewilderment.

Once Eddie finds May, carrying a horse trailer and a few horses behind his truck, he wants her to join him, most likely dreaming of living in the open plains near the mountains somewhere, but May is reluctant, mindful of their cyclical pattern of self-destructive behavior.  Though she’s obviously attracted to Eddie, who’s a natural on a horse, he’s also a disturbing sexual presence, causing May to feel mistrustful, though mostly it seems of herself.  While Eddie is desperate to get her back, he tries to charm his way through her defenses, where amusing humor and sarcasm are eventually replaced by drunken rage, where through flashbacks we soon learn the real mystery behind their dysfunctional relationship, which strangely involves Harry Dean Stanton as the Old Man who led a double life when he was younger, moving back and forth between families, each one not knowing about the other, where these two are a product of his duplicity.  Eddie seems to accept the fact that they are doomed lovers, forever connected, where nobody and nothing can come in between, as if it’s their only destiny, while May wants to make a new start, which has Eddie disgusted at the thought, thinking she’s only deluding herself.  While the two go at it, tearing each other apart, making up, continually opening up even deeper wounds, May has a surprise, as she needs to get ready for a date who will be arriving soon, which has Eddie relishing the opportunity to demean and embarrass the poor slob.  If ever there was theater of the uncomfortable, this is it, as the emotional discoveries of love and abandonment veer into the world of horror and the macabre.  The Old Man is also hanging around the periphery of the motel, living in his trailer parked behind the motel, sitting around on chairs watching and drinking, as if he hasn’t inflicted enough damage, yet he may be their “safe” place, a shelter in the storm, someone they have in common, whose initial narration feels like a wayward Greek chorus, a man who set out on a journey, got lost and distracted, and never found his way back home, leaving it up to these two to find their way on their own.  This remote outpost in the middle of nowhere seems to be their exile into purgatory.

But all the introductory emotional fireworks is just a prelude to the main event, which is the evening arrival of the gentleman caller, Randy Quaid, just an ordinary guy genuinely concerned about May who becomes a silent witness, like the role of a Holy Fool.  After a little physical altercation, he is quickly offered a drink to settle things down, and over drinks at a lonely motel bar illuminated by the neon lights shining through the window and reflected in the mirror above the bar, each of these doomed lovers tells their sad tale of woe to a perfect stranger, embellished with hypnotic pacing as they backtrack into the sordid details of their tortured pasts.  These eloquent monologues are fiercely intense and highly disturbing, yet they couldn’t be told with more quiet, purposeful understatement. Both Shepard and Basinger, initially defined by how much she fears and is both attracted and repelled by him, disappear from view, replaced by younger more innocent versions of themselves onscreen, where only their voices remain connected to who they really are.  The dreamlike quality of the flashback memories have a haunting effect, as if they’ve been replayed in their minds hundreds of times, and whatever actually happened has been replaced with countless variations and inventions until they barely recognize who they are anymore.  Their entire adult life has been one long struggle to rid their minds of these painful truths, but just seeing one another brings it all back where they’re forced to relive the heartbreaking tragedy all over again, where only in an alcoholic haze does the subject even surface before returning once more into the deep recesses of their damaged souls.  These flashback sequences near the end of the film are among the most uniquely original scenes Altman has ever filmed, and the way he continually disconnects the visual memory from the descriptive monologues is sublimely poetic, where the film itself becomes a surrealistic plateau of mental anguish and existential dread, sure to repeat itself hundreds of more times, like an infected virus spreading through the bloodstream.  Shepard literally inhabits the role he wrote, a character where every nuance matters, while Basinger’s smoldering sexuality and pitch perfect Southern twang may be her best performance over her entire career, rivaled only by LA CONFIDENTIAL (1997).  Also a steady stream of soulful country music marks the first half of the film, a combination of Waylon Jennings and Sandy Rogers, who is Shepard’s sister, who can be heard on YouTube (4:52) here: Sandy Rogers - Go Rosa.  Altman’s stream-of-consciousness theme of tortured and damaged souls was never more poetically realized than this film, where an early scene that wordlessly expresses Basinger’s relationship to a small girl locked out of her motel room is simply heart wrenching.
Posted by Robert Kennedy at 12:00 AM